Sitting in her tidy Munich apartment, as snowflakes swirl outside, Jenny Hiller is far away as she watches her younger self dance on screen. With striking blue-grey eyes and a visage that belies her 92 years, Hiller is one of the last of the “Hiller Girls”, a long-legged dance troupe that entertained Germany and the world for decades. The Hiller Girls danced around the hyperinflation volcano of Weimar Berlin. They danced in Nazi-era stage and movie spectacles. And after their old variety palaces were bombed out of existence, the girls found new stages and old audiences and kept on high-kicking. It’s long ago now but, as Jenny watches her younger self dance in old footage, her fingers dance in time on her knee. Today the Hiller Girls are all but forgotten in Germany; others confuse them with the “Tiller Girls”, a British dance troupe of the same era. 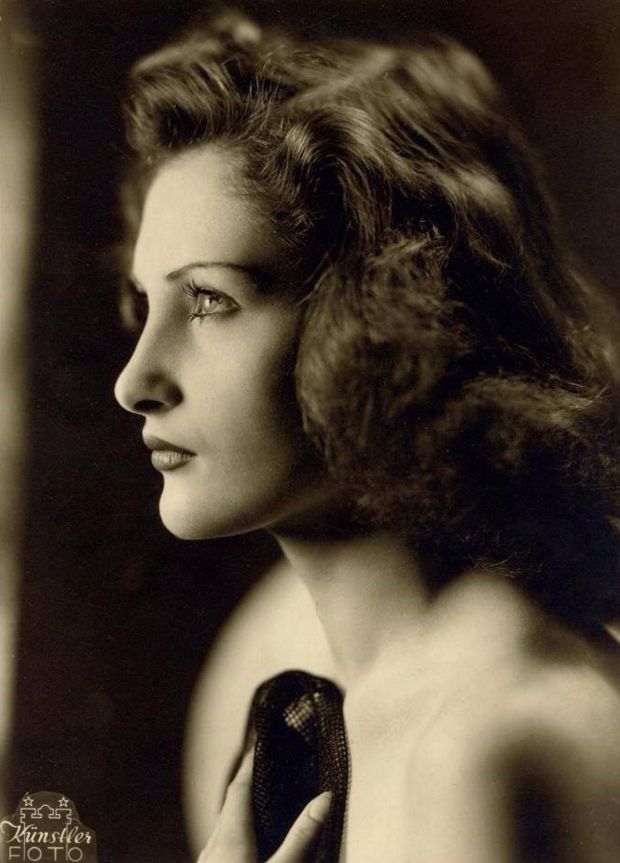 Jenny Hiller in a publicity photo from the 1940s. (Photo: Derek Scally Archive)

But the German showgirl troupe, created by operetta singer turned showman Rolf Hiller and his choreographer wife Gertrude in 1928, were known for precise, artistic standards as high as their kicks.

“Everything we had was the best: opulent costumes, handmade shoes,” says Jenny, a lively and sprightly lady who eventually became the second Mrs Hiller. “My husband said that, for what it cost him to kit us out, he could have built many, many houses.”

In 1941 Jenny, Munich born and bred, was a 17 year-old orphan working in a factory in the Bavarian capital. She heard the famous Hiller Girls were in town and were looking to train new recruits.

With a friend in tow, she slipped in the stage door of Munich’s Deutsches Theater and found Rolf Hiller waiting for them. There were just two problems.

First, Jenny’s legal guardian was wary of letting her join the troupe and go on the road. And second problem?

“I couldn’t dance,” laughs Jenny. “But Mr Hiller said he preferred girls who weren’t trained yet so they could learn the Hiller dances better.”

After convincing her guardian to let her join, Jenny took crash courses in acrobatics, classical dance and tap. Soon she was on the road with the troupe, taking lessons and rehearsing by day, performing and assisting with the wardrobe by night.

Life on the road was far from glamorous but, as a Hiller Girl, Jenny soon got used to to the fan letters, flowers and gentlemen admirers.

In his 1941 memoirs, Robert Wilschke, a German variety and circus agent, encountered the girls on a night train from one engagement.

When the curtain fell in Hamburg, they hurried to the train station to travel through the night to Munich. Rehearsal was at 10am and the first matinee as soon as after lunch. The girls he thought were “delightful young women . . . giving the impression of well-bred girls’ boarding school”.

Wilschke was also complimentary of Rolf Hiller and his first wife Gertrude.

“Keeping so many young people together for years and keeping them at a high artistic level requires great people skills, something that is not commonplace,” he told his readers. 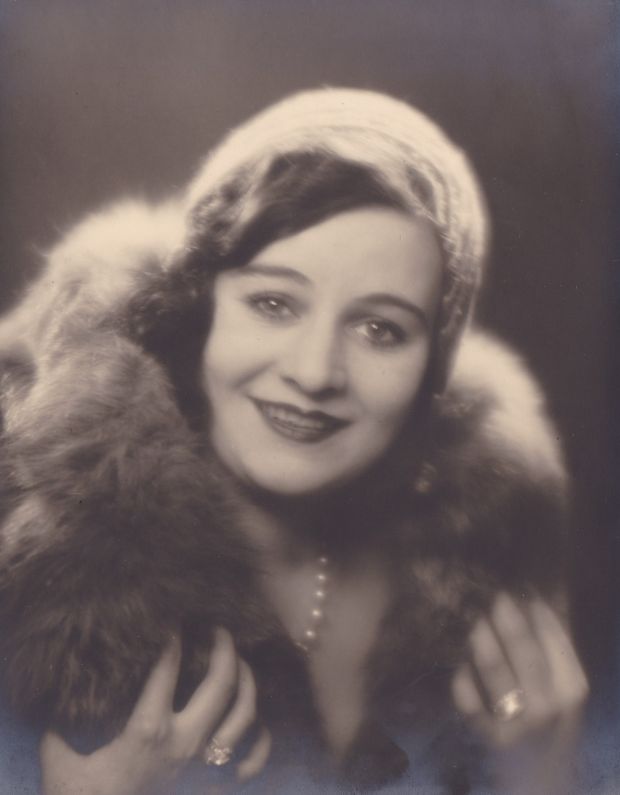 At their peak, the Hiller Girls were big stars, with 12 specially commissioned and choreographed numbers in a repertoire that was refreshed every month. They lived on the road, but had regular homes and engagements in all the big German cities. In Berlin it was the vast Scala and majestic, expressionist Wintergarten, both no more.

They were also regular guests in northern Europe, in particular the Tivoli amusement stages in Denmark and Sweden.

With a repertoire that bridged the gap between popular and artistic, the Hiller Girls’ most celebrated – and notorious – number was the Guard Dance, first performed in Munich in 1935, in which the girls, in Prussian grenadier outfits, high-kicked their way around the stage in symmetrical lines.

“We were so precise that an army general once said his men could take a lesson out of our book,” says Jenny proudly. 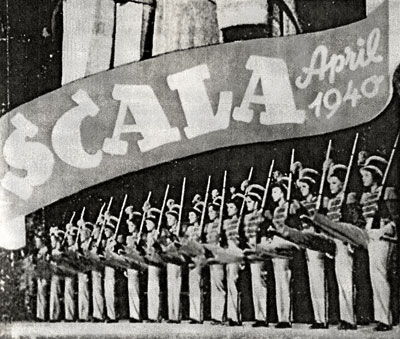 The Hiller Girls doing their famous “Guard Dance” in 1940.

While revues were their staple work, the Hiller Girls were regulars in big operetta stage productions such as Die Fledermaus and The Flower of Hawaii. They also appeared in many films – from the musical spectaculars of the day to Nazi propaganda films.

“Politics didn’t interest us,” insists Jenny. But the Nazi politicians were very interested in the Hiller girls. The top brass, including Joseph Goebbels and Hermann Göring, were regulars at their shows.

“We had Hitler in the Wintergarten audience once, I remember that,” says Jenny.

Apart from Nazi propaganda films, Jenny says she is not aware of any other deals struck by her late husband to keep the troupe going through the war years, beyond regular performances for troops in the mornings before engagements.

Even if there was a deal with the Nazis, it didn’t protect the troupe entirely. They learned that on a wartime tour of Sweden, a welcome break from blackouts and ration cards in Germany.

“I guess we were allowed go there for propaganda purposes, to show Germany wasn’t all ruins, but we happened to appear on the same bill there as some Jewish artists,” Jenny remembers Hiller. “Sweden was neutral but as soon as we got to occupied Norway, the Gestapo arrested my husband for the crime of ‘aiding Jews’. He was in prison [in Berlin] for a month before he was released.”

Jenny insists the troupe stayed far away from politics, as far as was possible in a dictatorship with the final say on artistic matters. Unlike other performing groups of the time whom the Nazis forced to fire Jewish members, Jenny doesn’t remember any Jewish girls in the Hiller Girls.

Later she remembers one half-Jewish girl, whose name she can’t remember, but who continued to dance after Hiller saw to it that her identity, as Jenny puts it, “slipped under the table”.

The girls’ costumes were not just extravagant, they were extremely daring for the time. It’s a realisation that contradicts the accepted version that, after rising to power in 1933, the Nazis sanitised out of existence the former sinbins that were Weimar German stages.

“In our shows we had naked women on stage – not us, mind – and our costumes stayed the same,” says Jenny. “Don’t forget: Goebbels was a ladies’ man.”

Their first encounter with prudery was not in Nazi Germany, she adds, but in Mussolini’s Italy and Franco’s Spain. The compromise? The Hiller Girls added fringes to some of their more revealing outfits.

Back in Munich in Jenny’s apartment, the dance footage on screen has moved on to the postwar years. Though the old variety stages were in ruins, like much of Germany’s major cities, the girls, largely on their own initiative, regrouped in a more modest form to dance for American occupying forces in any hall they could find.

Though the world had changed, and variety was dying, the Hiller Girls were still in demand. They took on new members and continued to tour as far away as Spain, Italy and Japan – though not always without controversy.

Ula Becker, one of the last girls to join the troupe, remembers an encounter in a Danish jazz club after a show in 1966.

“In the toilet we were talking German and then a drunk women emerged from a cubicle and started hitting us,” she said. “I was just 16.”

As the light fades, we study glamour shots from the early 1940s showing Jenny as a raven-haired beauty. In her heyday, she had a striking similarity to Hedy Lamar, the Czech inventor turned Hollywood leading lady.

With looks like that, I suggest to Jenny, she had no shortage of admirers.

“We had a dance captain who made sure there was no funny business,” the 92-year-old insists primly.

George Thiel doesn’t quite believe her. His mother was one of Jenny’s fellow Hiller Girls, joining the troupe in the late 1950s, aged 16. From reports, she led a wild and free life that was at odds with the buttoned-down cliches of 1950s West Germany.

“For the time, their productions were extremely daring; today you’d say sexy,” said Thiel, who lives near Hamburg. “Some of the girls told me they remembered men in the audience who weren’t able to applaud the act because their hands were elsewhere.”

Thiel agrees with Jenny that Rolf Hiller and the dance captain of the day kept a close eye on the girls. But pregnancies happened, he says, as did abortions.

“My mother got pregnant and I’m no virgin birth, but she never told me who my father was,” said Thiel.

After four decades dancing through the highs and lows of German history, the history of the Hiller Girls ended in 1968 when founders Gertrude and Rolf Hiller died in short succession. Though some girls continued in smaller formations, the Hiller girls went their separate ways. Not all coped well with their new lives, away from the footlights.

Thiel’s mother went to work in a Hamburg factory and, he says, she struggled with the drastic adjustment – as did many of her old troupe colleagues.

“My mother took her life in 2010 and she’s not the only one,” he said. “The girls lived their lives onstage and off, but I think it took a lot out of them.”

It was only after his mother’s death, still not knowing who his father was, that he found all of his mothers old photos and scrapbooks. Thiel found it therapeutic to work through her archive, scanning photos and uploading them to a website and dedicated Facebook page. Overnight, he says, surviving Hiller girls like Jenny made contact.

Together they have pooled their material to reconstruct a story of Germany’s glamorous past that few remember today.

Given Germany’s many ruptures in the 20th century – the deprivations of hyperinflation, the false promise of fascism, and the postwar struggle – few artistic institutions survived it all. But the Hiller Girls did, and Jenny Hiller danced through most of it.

“It wasn’t an easy time,” she says, her steely, striking eyes now far away as the light fades, “but it was a beautiful time.”