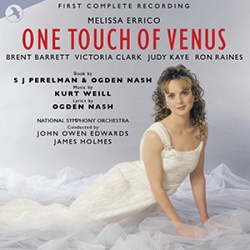 The cover of the new complete “One Touch of Venus” recording on JAY Records.

The Kurt Weill version, written in 1943 for Mary Martin, offers great show music for a great star in a great story. “Speak Low” and “I’m a Stranger Here Myself” are only two of many musical highlight. So, not surprisingly, Venus was an instant hit. And many of the operetta composers who were in New York in exile at the time—Emmerich Kálmán and Ralph Benatzky among them—went to see One Touch of Venus and admired it. It was admiration mixed with suppressed envy that Weill managed to get his show(s) produced on Broadway, while most other Europeans had no such luck.

The recording made back then of Venus for Decca is a rather restricted one.

You could call it a “mini-album,” with ten tracks featuring Martin and a studio cast. Though it makes for very pleasant listening, it’s not representative of the show and all its glories. And you certainly wouldn’t consider Venus a cousin of operetta heroines such as Hélène and Galathee listening to Mary Martin.

In 1948, a film version came out starring Ava Gardner. It did not include much music, but it made memories of Schöne Galathee come alive when I saw it on DVD. 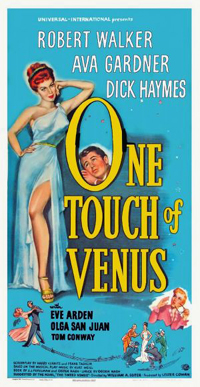 The poster for the 1948 movie version starring Ava Gardner

Of course, the Encores performance in New York City in 1996—starring the young and comparatively unknown Melissa Errico—was a different matter altogether. Not because the then 26-year-old Miss Errico sounds anything you might call “operettic,” but because hearing the entire music (the ballets “Forty Minutes for Lunch” and “Venus in Ozone Heights” included) made you realize what a stylistically diverse score Venus actually is, and that there is room for many influences to be played out, from Barber Shop quartets to, well yes, operetta. After all, Weill came from Berlin and had experienced the boom years of jazz operetta there first hand. They deeply influenced his own style.

The Encored performance of 1996 was not recorded, sadly. Even though everyone raved about it, including the New York Times. And a Japanese recording by the Takarazuka troupe (TMP TMPC-202-3) is not really an alternative.

Why it took the Weill Foundation so long to find a label to undertake a new studio recording, with Melissa Errico, remains their secret.

But it finally happened. Steve Suskin reports on Playbill.com: “UK-based Jay Records arranged to make their own studio recording of the score. This turned out to be a long and tortured undertaking, apparently due to problems of financing. Three recording sessions were held in 2000, and then–nothing. Fans of Errico […] waited impatiently as the years turned into a decade. Back they went into the studio in 2012, finally.” It still took another two years to actually release the discs in 2014. (Suskin points out that Errico’s five main songs were all recorded in 2000, with conductor John Owen Edwards. “A good half of the score seems to have been recorded over the last two years, with conductor James Holmes.”) 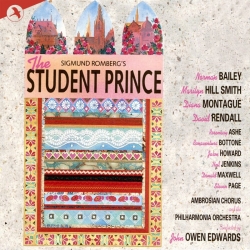 The JAY Records version of Romberg’s “THe Student Prince”.

JAY Records, you might remember, is the label that has issued some beloved operetta albums, for example ENO’s Orpheus in the Underworld, The Mikado and some other shows such as Countess Maritza and, most famously, the complete Student Prince. You could call their new Venus a welcome addition to the operetta list, even if it took forever to get it recorded, edited and released.

So, all’s well that ends well? In many ways, yes.

The full score heard on JAY Records is a marvel. And the cast presented pleasantly “unoperatic.” (In contrast, to let’s say the JAY Records Student Prince.) I especially liked the gangsters singing “The Trouble With Women” with Damon Runyon-ish accents, bringing a cartoonish quality to the show that goes well with the more slapstick (or operetta) side of proceedings.

As for the stars, and particularly Miss Errico, she sounds charming. Even two decades after her original Venus at Encores. My only reservation about this new recording is that it doesn’t have much theatrical flair or noticable personality. It’s very “studio” in style, which isn’t surprising given its history. But it makes listening to the double discs a bit stale at times. Also, the singers are rarely allowed to put more than nuances into their interpretations. I don’t know if someone from the Weill Foundation stood behind them with a shot gun, telling them that it was forbidden to handle Weill’s vocal lines more freely (as Mary Martin certainly did.) Whatever the reason, I feel these talented singers could have easily come up with a more bouncy and liberated version of Venus than heard here. And the National Symphony Orchestra under John Owen Edwards and James Holmes make Weill’s superb orchestrations sound good, but rarely exciting. And sensousness isn’t the top priority here, unfortunately.

But those are small quibbles. Though important ones. To finally have a full—and I truly mean “full”!—recording of One Touch of Venus is marvelous. An achievement everyone involved can be proud of. 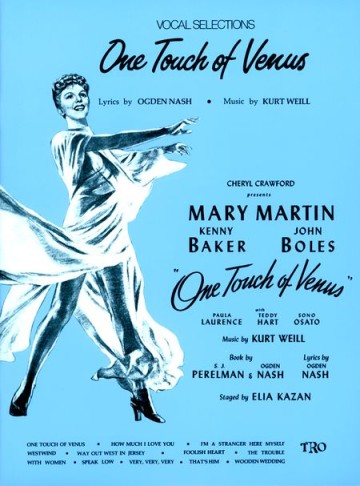 And Brent Barrett as Rodney Hatch—the modern-day barber of 1943 who Venus falls in love with—is a great partner in crime here. He too would make an interesting operetta hero for the more jazzed up side-roads of the genre. But, truth be told, he is no match for, let’s say, Cheyenne Jackson on the recently released new West Side Story. There’s none of the irresistable Jackson swagger in Barrett’s singing. And star quality, vocally speaking, is not spelled with a capital S either. However, that might change if you see him in action and on stage, one day, as Rodney Hatch. Because Mr. Barrett is certainly visually refreshing.

When future generations of operetta researchers will deal with adaptations of classic sagas and antiquity in general, they should include One Touch of Venus in their discussions of Orphée, Hélène, Ixion (the burlesque spectacle starring Lydia Thompson), Schöne Galathée in the Suppé version and the Max Hansen modernization, and many other glorious operettas. At least, with this new disc available, no one can claim that it’s impossible to actually listen to the music.