The story of the six-member close harmony group known as Comedian Harmonists – the toast of Germany and elsewhere in the late 1920s/early 1930s, and their dissolution during the Third Reich - is a fascinating one, and has already been the subject of a 1997 German film, a major documentary, and a Broadway revue. It’s also been a pet project of songwriter Barry Manilow and his longtime collaborator Bruce Sussman for almost 25 years. 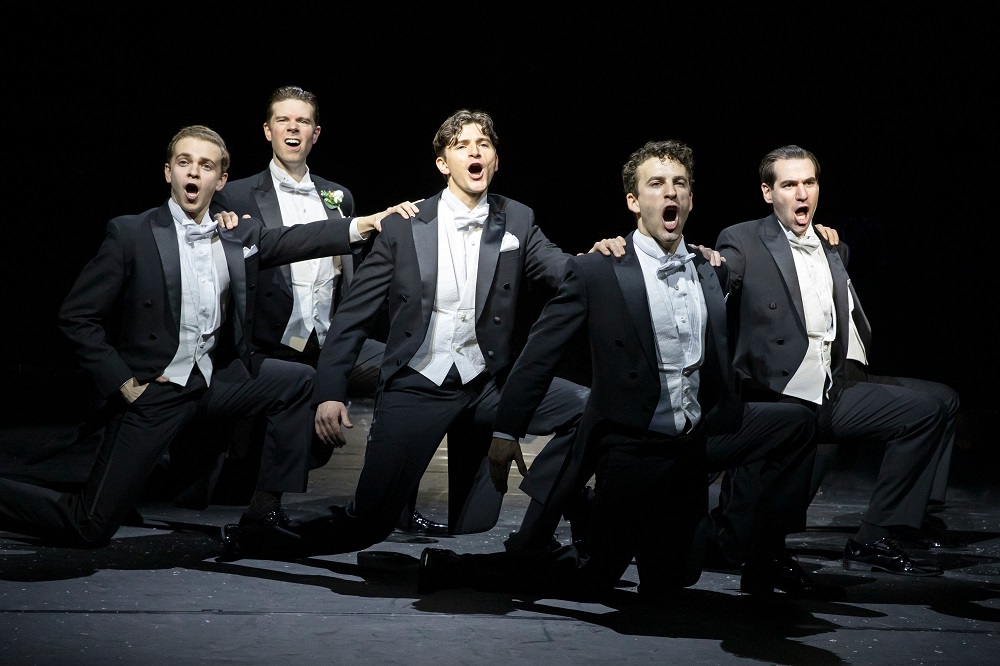 The musical Harmony, in fact, premiered at the La Jolla Playhouse way back in 1997, and also had a run in Atlanta and at Los Angeles’ Ahmanson Theatre in 2014. The road to Broadway was apparently rocky, but legal wrangling resolved, here it is at last in New York, albeit Off-Off-Broadway at the National Yiddish Theatre Folksbiene. 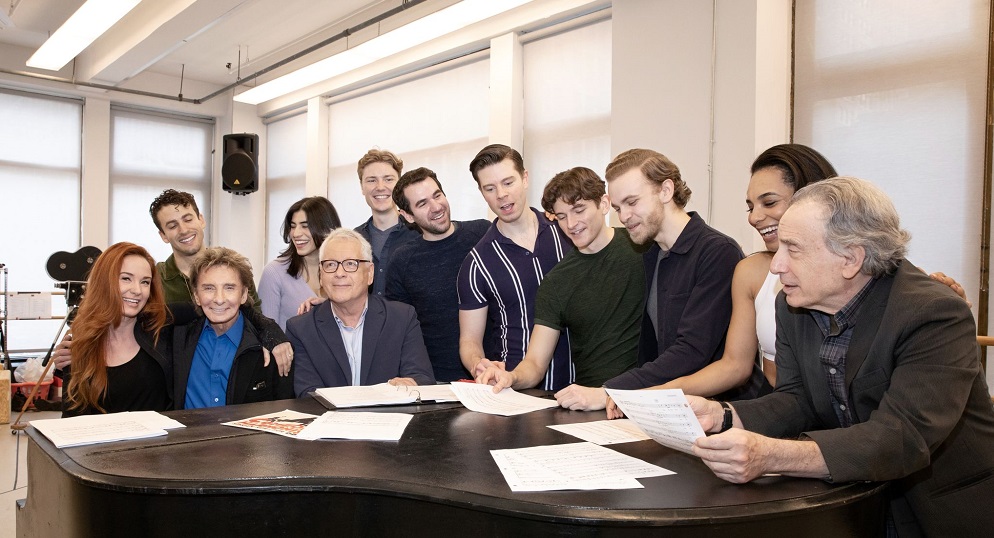 New to this incarnation of the show is an older version of Rabbi, so called because he had studied to become one, played by Broadway veteran Chip Zien who serves as narrator of the story. Predictably wonderful as Zien is, I felt the framing device was unnecessary and sporadically intrusive. And apart from his strong performance as older Rabbi, he appears throughout the show as various historical personages with whom the group interacted (e.g. Richard Strauss, Albert Einstein, and most surprisingly, Marlene Dietrich). 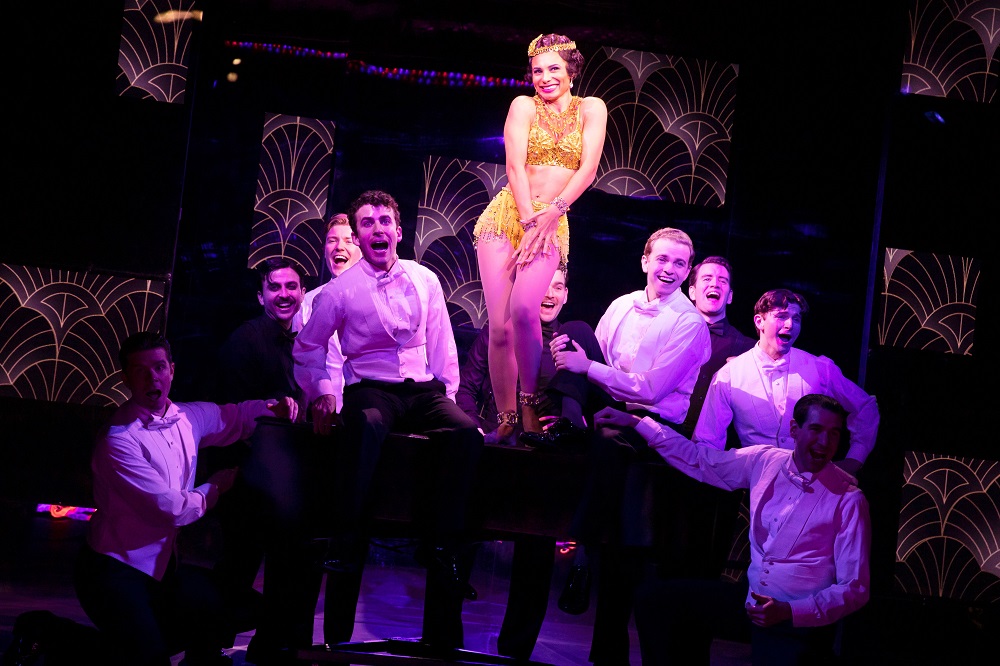 All the celebrities are drawn very one-dimensionally, and the Dietrich character is a downright unkind and inaccurate caricature of the aging star, not the bright and charismatic Dietrich for whom the group would have served as backup in 1928. Much mockery is made of her lack of singing ability and her rhoticism speech impediment (“w” for “r”). Would this actually have been the case in her native German? In any case, the sight of Zien in drag, cheap gag or not, elicits chuckles.

Manilow’s performance numbers for the Harmonists are reasonable pastiche soundalikes for the type of material the group sang, starting with the opening title song. (And if you’re curious, you can hear plenty of examples of their vocalizing in German and English on YouTube.)

The book numbers which comprise the rest of the score are in a traditional Broadway vein, and never less than proficient. On first hearing, the most memorable tunes are Young Rabbi’s “Every Single Day” (powerfully sung by Kornfeld); the wives’ “Where You Go,” sung first by Boggess and then in unison with Davidson; and the concluding “Stars in the Night.”

Incidentally, Manilow himself has a very nice Scores CD of seven songs from the show coupled with some from his other theatrical venture, Copacabana.

The production numbers – all very slickly and entertainingly staged by director/choreographer Warren Carlyle – include “We’re Goin’ Loco,” a might-have-been Ziegfeld Follies song for Baker and the Group, that is, if the boys had chosen not to return to Germany after their triumph at Carnegie Hall; and a satirical “Come to the Fatherland” number with the group as marionettes mocking the Nazis’ manipulation.

“How Can I Serve You, Madame?” purports to show how the Harmonists first added comedy to its act. Their tuxedos are stolen, and they appear in waiters’ jackets sans pants, and sing their a suggestive number. 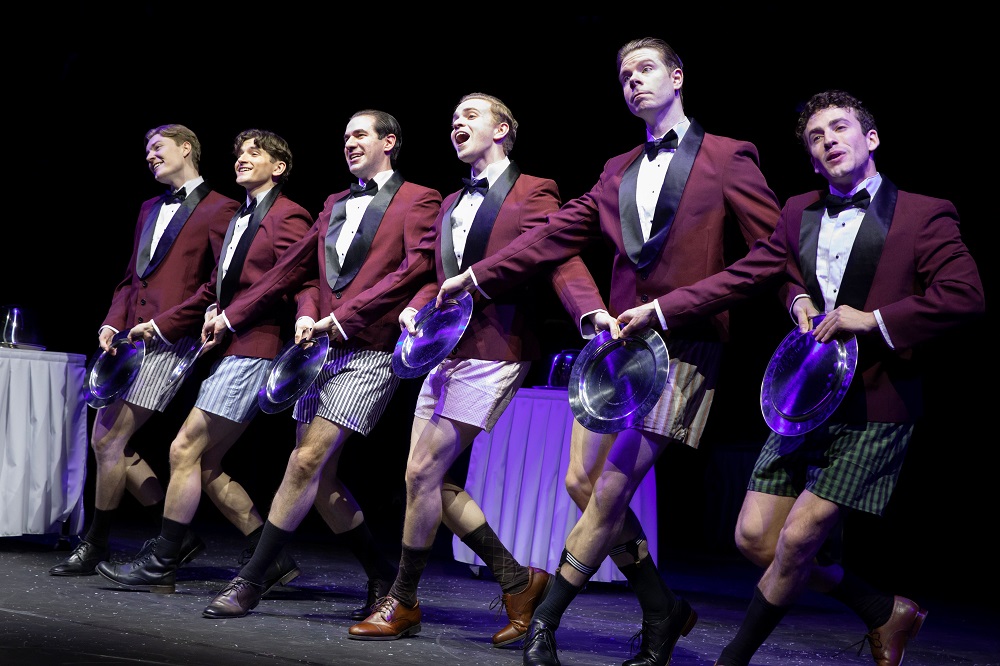 The second, more dramatic act, focuses on the conflicts with the Nazis, as a concert is interrupted by racist taunts. (Several of the group were Jewish.) By the looks of the 1997 trailer, there was a similar scene in the German film, too.)

Some in my audience were speculating on an uptown transfer. But if that’s in the cards, it hasn’t yet been announced.