This interesting book contains 13 papers by different authors, delivered in symposium at the Dresden Staatsoperette (the one subsidized theatre in Germany exclusively devoted to operetta and musical). I’m not very fond of this writing system which often results in overlapping contributions while other parts of the field are left empty. But I have to admit that this time, though there are overlapping sections and one chapter has almost nothing to do with the Nazi-area (the lies told by Robert Stolz on his career), the reader nevertheless gets quite a complete picture of the situation during those dreadful years. Operetta has had some difficult decades but slowly it once more pops up as it provides music lovers, theatre companies and some producers interesting music and theatrical situations. 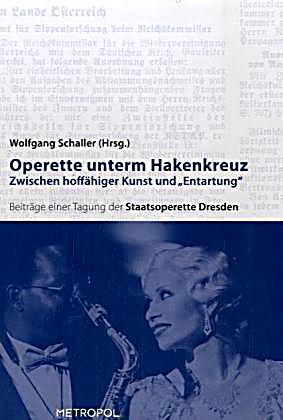 The cover of the Staatsoperette Dresden publication.

There is indeed a big difference between grand opera and traditional operetta. In opera there is now an iron repertory that is played and played again. Granted, there are literally hundreds of non-iron repertory pieces which are very enjoyable but even an amateur like myself of Donizetti, Giordano, Mascagni and lesser known names as the brothers Ricci, Persiani, Apolloni, Zandonai, Pacini, Smareglia etc. has to admit those composers didn’t always produce masterpieces on the same level as their best known works. Though one would like to see productions of Zaza, Ruy Blas or Madame Sans-Gêne one has to admit there are some flaws in those operas. Operetta however has a lot of never played musical masterpieces owing to the silliness of the libretti which almost defy imagination in our own cynical times. The internet and the many recent complete performances on some German labels have provided us with complete performances of magnificent scores by Lehar, Fall, Kalman, Jessel etc. which one thought to be lost for ever. And one should immerse oneself in the mentality of a bygone generation which swallowed often sugary heroes and heroines to understand why those composers believed in those characters and could write such tuneful and convincing music (though few operettas are as silly as Strauss’ Arabella).

If one takes abstraction of some stories and concentrates on the immensely beautiful music one is amply rewarded and one asks oneself how hopelessly fanatic one can be in discarding it, just because the composer was Jewish. Due to a lot reminiscences we know that Hitler himself had more musical taste than we always thought. Wagner was fine as it exalted German heroes and there are some tremendous moments in his long winding operas but the Führer’s real love was operetta. If there is one work that in its innocent story sings of simple rural German life it is Leon Jessel’s Schwarzwaldmädel. Hitler liked it and its catchy tunes and still did not lift a finger when Goebbels and his minions forbade performances because Jessel was Jewish. The composer, very conservative and nationalistic, stayed in Germany  and died in abject poverty, completely starved in a Jewish Hospital in January 1942. The fate of his work is typical for the perverted methods the Nazi’s employed during their brief stay in power. An official note to Goebbels from September 1934 tells us in detail which measures are to be taken.

The big problem of course was the fact that “die gute alte Jüdische Operette” was immensely popular with the Germans and that the number of pure Arian works was somewhat limited as a majority of composers, libretto-writers, producers and several important singers were Jewish. Therefore the Nazi’s left classical operettas of the so called golden age in peace as the generation of Johan Strauss and contemporaries was safely deceased. Moreover, the Nazi’s didn’t want to delve too deep into Strauss’ ancestors as they were almost sure they would find ethnic proofs they didn’t want to find. Mendelsohn or even Offenbach  could be banned but not Johan Strauss. The second measure Nazi’s took was too intimidate the managers of opera houses to perform less works by Fall and Kalman, until the time came they could simply be forbidden (usually around 1937). Pure Jewish themes were immediately axed, even made by so-called Arians (Lehar’s Der Rastelbindler had a Jewish tinkler as a hero). But almost all of Lehar’s and Künneke’s operettas too had Jewish libretto-writers. The administration had a solution for the problem. When the writer or the lyricist (usually two different persons) were not militant Jews, the performance could go on though the names of the composer’s collaborators could not be mentioned. But if the lyricist was a Zionist like Fritz Löhner,  then questions could and should be raised. Friederike, Lehar’s version of Goethe’s love affair with Friederike Brion, was forbidden as a Jew couldn’t get the essence of a German poet. The two chapters on Lehar and on Löhner (a horrible fate in Dachau while his whole family was killed too) are especially interesting and give a vivid picture of the artistic difficulties and problems suffered when thugs are in power. Another sad fate is told in the chapter devoted to Paul Abraham, the immensely popular composer of Blume von Hawai and Victoira und ihr Husar. He fled to the States where he became destitute as nobody was interested in his compositions. He ended in a mad-house.

A lot of Jewish but even non-Jewish composers fled to the States and in the correspondence between Kalman and one of his major collaborators one discovers that Americans were not really interested in subjects of the Austro-Hungarian empire while Kalman and Co in their turn couldn’t adjust their music to suit American tastes. Maybe that is the subject that is still to be treated in another symposium as it cannot have been American xenophobia that was at the heart of the problem.  Romberg and Herbert and Friml (granted, not victims of Nazi-power)  were hugely successful. I’d loved to have read something on those refugees who could adjust  like Hans May (the composer of Joseph Schmidt-movies) who scored so many Britsh movies.  And a real refugee like operetta composer Nicholas Brodzky wrote gigantic hits like ‘Be My Love’ and ‘Because You’re Mine’. But that seems to be one of the few omissions in this very rewarding book. It is clear however that the Nazi purification did more than just oust compositions by Jewish citizens. It effectively killed a musical genre; in my opinion the greatest musical tragedy of the 20th century.