Between 1943 and 1959, the lyricist-librettist Oscar Hammerstein II (1895–1960) and his composer partner, Richard Rodgers (1902–1979), transformed American popular culture. Men of long experience in their field, they drew on patterns that had existed long before their birth: a sentimental love of the land; a passion for social justice, predicated on faith in the innate goodness of ordinary folk; a canny awareness of the comedy inherent in the basic human tropes of man and woman, parent and child, boss and underling; and an earnest reverence for the mysteries of life. 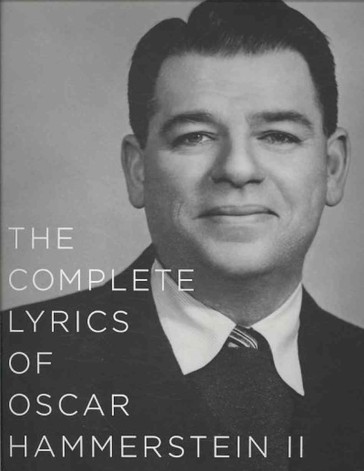 The edition of the Complete Lyrics of Oscar Hammerstein.

Rodgers and Hammerstein combined these familiar elements into something new, producing works that swept the world, entered the vernacular, and lodged permanently in the public mind. If you know that songs were sung in plays and movies between 1940 and the present, you probably know something about Rodgers and Hammerstein, and chances are you know a great deal more than you realize, even if you don’t go to Sound of Music sing-alongs dressed up as schnitzel with noodles.

The cultural resonance of Rodgers-and-Hammerstein, the concept, loomed large enough to put their separate earlier careers in shadow. Rodgers overcame this with more ease than Hammerstein: He had worked with only one previous lyricist, the brilliant wit and innovator Lorenz Hart; many of their songs and some of their stage works stayed in the repertoire. As he outlived both of his collaborators, Rodgers was able to stage-manage, to some degree, the way his career was perceived.

Hammerstein’s pre-Rodgers achievements, in contrast, were scattered and fragmentary, filed away in a dizzying mass of unrevivable works created with a small army of co-writers. Rodgers and Hart rarely divided their focus among multiple projects, and always looked for new approaches that would extend the musical-theater form; for nearly a decade, they had worked with only one book writer, Herbert Fields. Hammerstein, meanwhile, often tackled several projects at once; his résumé is littered with the kind of Broadway productions that seemed to treat writing as a sort of free-for-all team sport. Virtually all of Hart’s major work was done with Rodgers; Hammerstein, in the same period, worked with Sigmund Romberg, Herbert Stothart, Jerome Kern, Rudolf Friml, Vincent Youmans, Louis Alter, Lewis Gensler, Emmerich Kálmán, and Richard Whiting, among others.

This frenetic pileup of disconnected activities occupied the bulk of Hammerstein’s career; its results take up roughly 75 percent of The Complete Lyrics of Oscar Hammerstein II (Knopf), edited with painstaking thoroughness by Amy Asch. Such frenzied overbooking is often the mark of a hack, but Hammerstein was not a hack, merely an artist who took an exceptionally long time to find and train his natural voice.

The delay came, partly, because he had been bred to the hackwork. None of Broadway’s other major songwriters came from a theatrical family; Hammerstein’s father and uncle managed theaters and produced plays, lieutenants in the entertainment empire of their father, the larger-than-life impresario for whom Oscar was named. By age 22, young Oscar was an assistant stage manager on one of his uncle Arthur’s operettas; that year, Broadway heard his first professionally performed lyric, a chorus number opening the second act of an inanity called Furs and Frills (1917). To the theater in which Hammerstein grew up, such words were a throwaway: Chorus numbers existed purely to show off pretty girls or rouse the house with ringing masculine voices. Introducing a 1950s collection of his lyrics, Hammerstein recalled his embarrassment at the London opening of The Desert Song (1926), when the British choristers’ clipped diction made his vapid words painfully comprehensible.

Yet The Desert Song, one of the huge successes of Hammerstein’s romantic-operetta period, came just before Show Boat (1927), a work in which, though the operetta conventions are still present and the divertissement-heavy spectacle may swamp the storytelling, the tone has a new cogency. Show Boat‘s words arise from the characters; the words in far too many of Hammerstein’s earlier ventures seem to have arisen only from the lyricist’s awareness that characters in many previous operettas have expressed similar sentiments.

Plainly, Hammerstein’s essential earnestness of outlook, the quality that would make his sensibility predominate in the postwar boom years, was what had kept him locked in the old conventions for so long. Misreading that quality supplies the clichéd image of him as a rural simpleton adrift among big-city sharpies, a James Whitcomb Riley of Broadway. Yet Hammerstein ultimately out-sharped the sharpies, using the role to tame their unruly and irreverent art form to his own earnest purposes. (He also molded versions of it into the heroes of both 1933′s Music in the Air and 1947′s Allegro.)

The era’s other great lyricists (Hart, Cole Porter, Ira Gershwin, Irving Berlin) were chronic kidders struggling to find a diction for seriousness; their role model was W.S. Gilbert. Hammerstein, whose grandfather had welded Massenet and Richard Strauss to New York showbiz, was serious from the start. Accordingly, with Kern and then with Rodgers, he wrestled the predictable formulations that had produced Rose-Marie (1924) and The New Moon (1926) into the unpredictable, colloquially freer, and more genuinely poetic patterns of Carousel (1945), South Pacific (1949), and The King and I (1951).

To say he was earnest does not mean that he lacked the craft, wit, or subtlety of his colleagues. No rural simpleton envisioned South Pacific‘s “moon-happy night/Pouring light on the dew.” In The Complete Lyrics, you can glimpse Hammerstein’s saucy verbal playfulness (“When We Get Our Divorce” from 1925′s Sunny) or his Cole Porter–ish melancholy (“In the Heart of the Dark” from Very Warm for May, 1939). Once teamed with Rodgers, he can even make his formerly wince-causing use of dialect carry a satiric sting, as in The King and I‘s “Western People Funny”: “They think they civilize us/Whenever they advise us/To learn to make/The same mistake/That they are making too.” Focusing on feelings, Hammerstein found ideas that even people unimaginably remote from Broadway’s sensibility could share.