On 13 December, 2020, the Bavarian radio station BR-Klassik will broadcasts a live performance of André Messager‘s ‘comédie musicale’ Passionnément! from Munich’s Prinzregententheater. The stellar cast includes Véronique Gens, Étienne Dupuy et al. It’s a collaboration with Palazzetto Bru Zane and will be recorded by them as a ‘world premiere recording’ for their French Opera Series. Here is Kurt Gänzl’s essay on the show that originally premiered on 15 January, 1926, at the Théâtre de la Michodière in Paris, based on a libretto by Maurice Hennequin and Albert Willemetz. 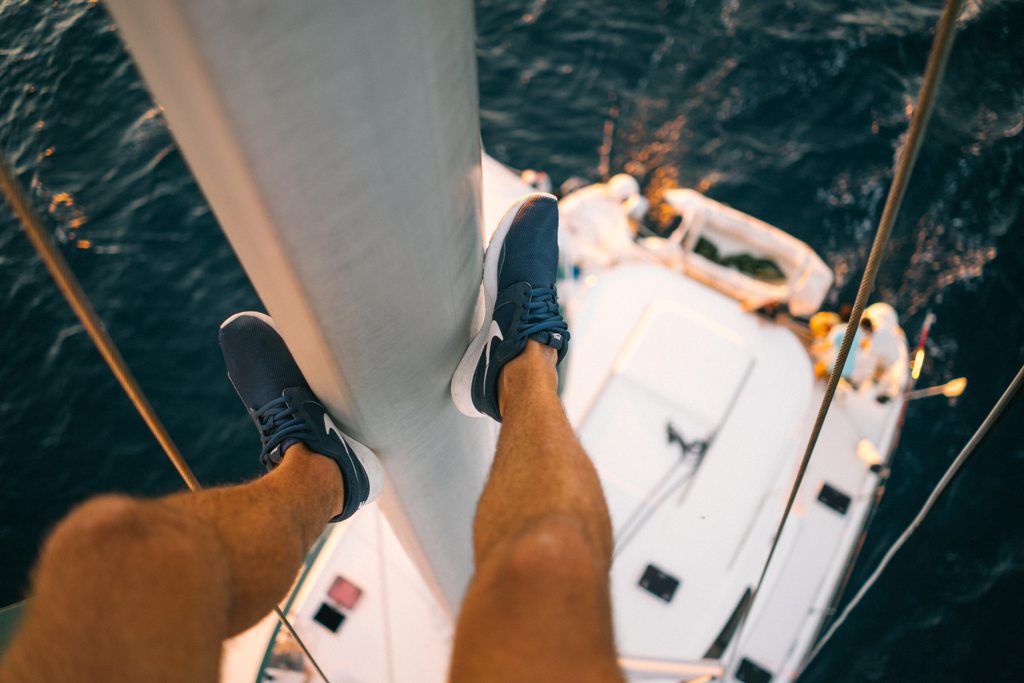 The action of “Passionnément!” is set on a yacht. (Photo: Samuel Sschwendener / Unsplash)

One of the most successful of Messager’s latter-day works, the ‘comédie musicale’ Passionnément! was composed to an up-to-date libretto in which the virtual inventor of the jazz-age musical comedy, Albert Willemetz, had a half-share. 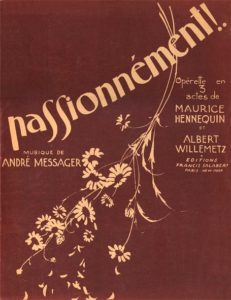 It tells of how the Machiavellian American millionaire William Stevenson (René Koval) yachts his way across the Atlantic to find the dissolute young gambler Robert Perceval (Géo Bury) in order to persuade him to cash in on some land that he has inherited in Colorado. Stevenson knows the land contains oil. He brings with him his pretty young ex-actress wife, Ketty (Jeanne Saint-Bonnet) but, mistrustful of the reputation of French men, insists that she disguise herself in dark glasses and a grey wig.

His mistrust is well placed, for when Perceval spies Ketty without her disguise he falls in love with her. She keeps up the double rôle of aged wife and her own young niece until she falls in her turn, and warns the young man of her husband’s intentions. That way, Perceval ends up, in the best tradition, with both the money and the girl. 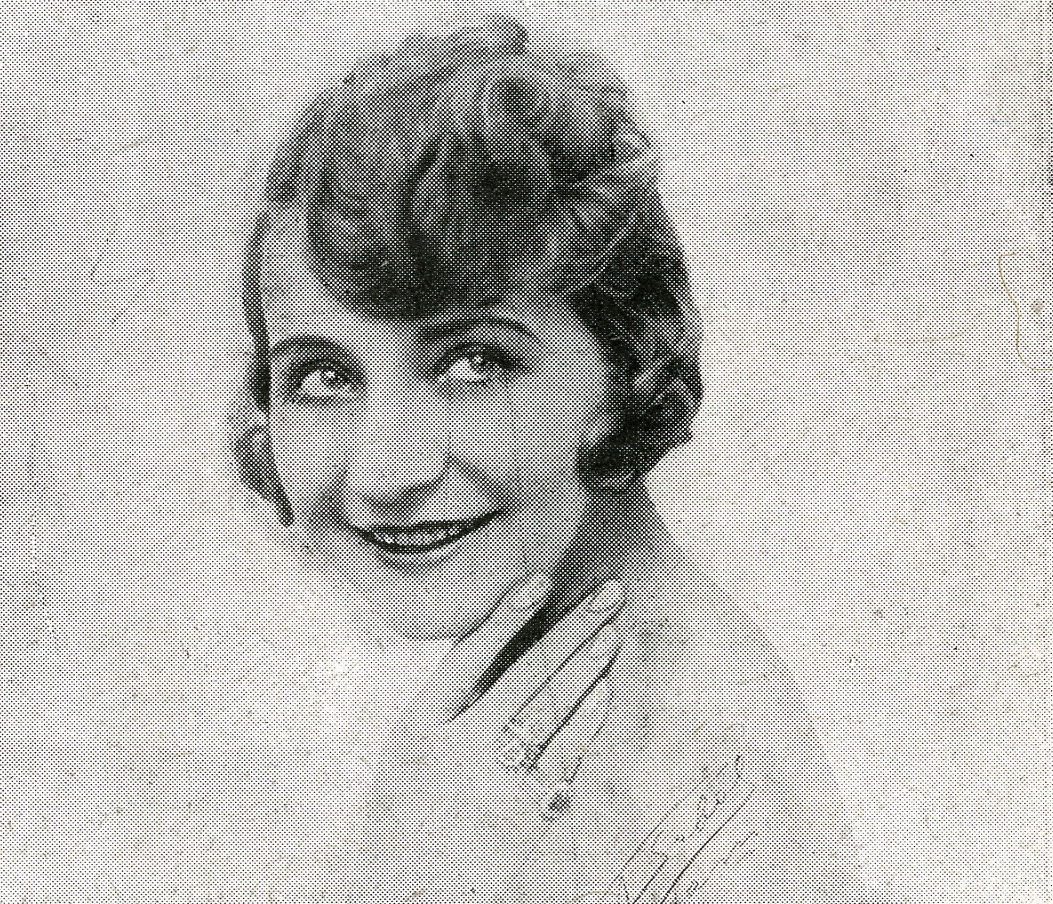 Renée Duler as seen in the original 1926 program of “Passionnément!” (Photo: Rubén Sobol)

Renée Duler was Hélène Le Barrois, Perceval’s discarded (between Acts I and II) mistress, whilst Denise Grey as Julia, Ketty’s oversexed maid, spent the evening with the captain of the yacht (Lucien Baroux) before finding ultimate satisfaction with her employer’s ultimately ex-husband. Hélène’s husband (who gets her back, one abandonment and three solos later) and two servants completed the cast. 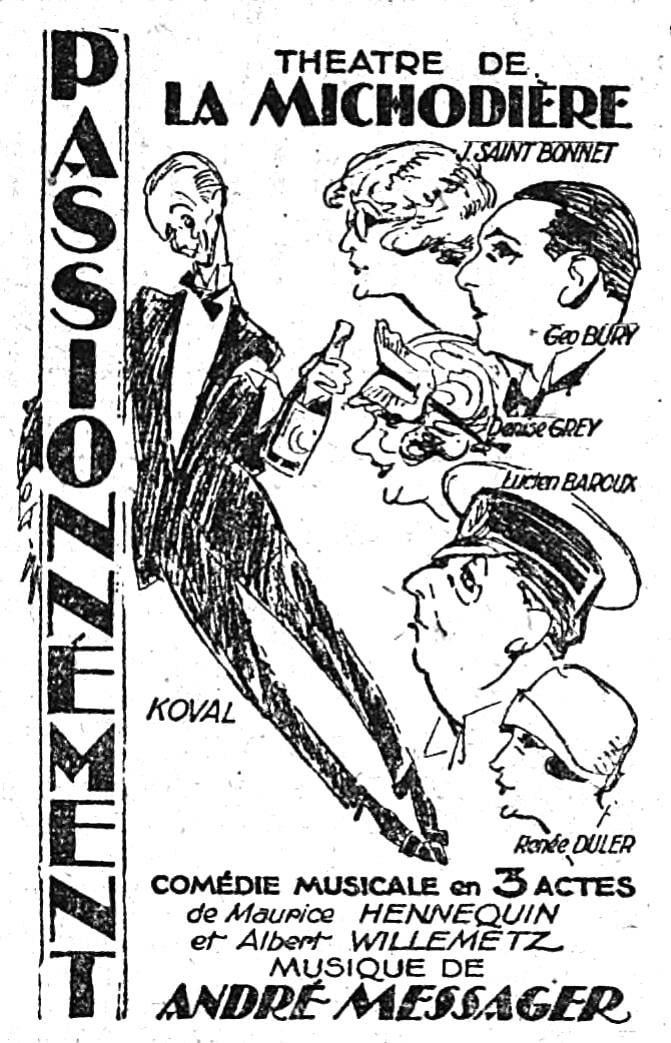 The main characters from “Passionnément!” as seen in the newspaper “Le Matin” in January 1926.

Messager’s 21-piece score was topped by solos for Perceval (the title-waltz ‘Passionnement’), Hélène (the reconciliatory rondeau ‘N’imaginez pas’ with which she returns to married something-like-bliss), Julia (three, including the comical prayer for a man ‘Vous avez comblé ma patronne’) and Ketty, demanding in ‘Ah! pourquoi les bons moments’ why the peak of pleasure has to be so short.

Stevenson had a comical piece crediting America’s success to ‘le régime sec’ (teetotalism), but after discovering ‘le bon vin français’ and a new personality between the second and third acts, had a much more amorous solo for the final act.

Duets, trios, and ensembles played their part in a soigné modern score which won the 73-year-old composer outstanding reviews and a major success. The original production of the show, mounted by Quinson and directed by Edmond Roze – all the most experienced the city had to offer – was a grand success.

After its initial Paris season it went on the road, with Bury playing his original rôle, and in 1932 it was seen again in Paris at the Trianon-Lyrique. In the meanwhile, it had made a small excursion abroad. In Hungary, which showed the most enterprise towards the French musical comedy of the 1920s, Jenö Molnár’s version of Nászéhszaka (wedding night) was a great success at the Belvárosi Színház, running more than 100 performances in its first run.

Another version, A legszebb éjszaká (the most wonderful night), which credited new music by Béla Csanak and a book done over by Andor Pünkösti, was played at the Márkus Park Színház in 1943.

The piece travelled little otherwise, although it was seen briefly in New York as played by a visiting French repertoire company with Sonia Alny and Georges Foix featured. A René Guissart film, with Fernand Graavey as its star and Koval repeating his stage rôle, was produced in 1932, and Passionnement! has continued to make regular regional appearances in France through to the present day.

A review of the new Messager biography by Christophe Mirambeau can be found here. The CD version of Passionnément is out on the Palazzetto Bru Zane label.