When I saw the news today that Gorki Theater Berlin will stream one of the greatest operetta productions I have ever seen for Christmas, I thought: finally I can watch Mischa Spoliansky’s Alles Schwindel over and over and over again! 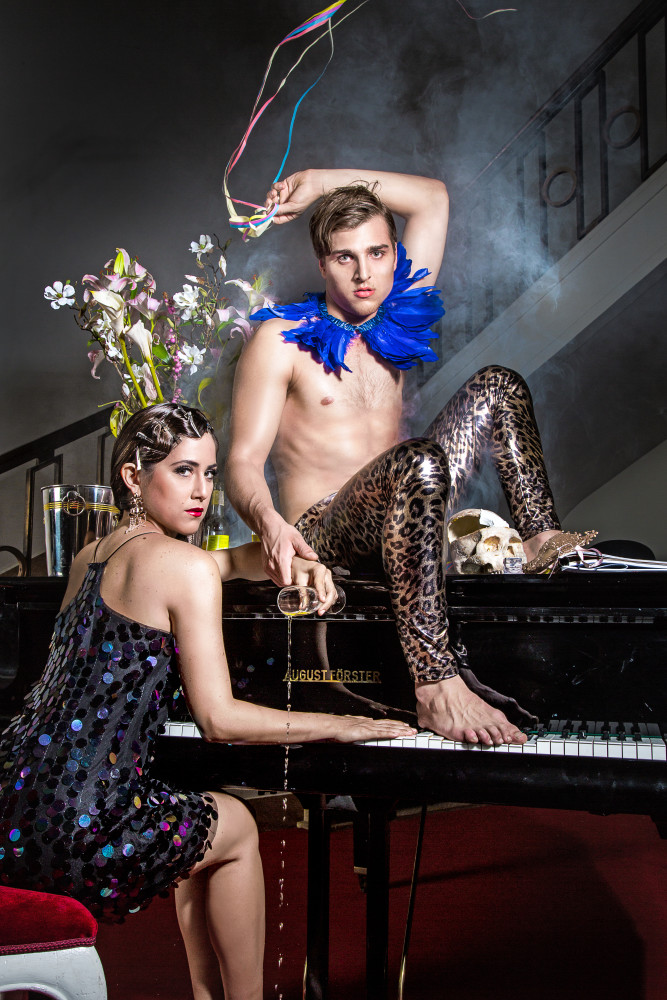 You might recall that this staging by the congenial Christian Weise came as a surprise hit to Gorki Theater, which is otherwise not known for any sort of “operetta tradition”. They put on this black-humored 1931 farce – with sinister texts by Marcellus Schiffer – as an example of Jewish authors who had been branded as “degenerate” by the Nazis and whose lives in Germany were cut short. Also, as it turned out, Alles Schwindel tells a story very close to the realities of many young hip Gorki audience members, as Derek Scally noted in his “Letter from Berlin”:

“The Gorki Theatre’s knock-out revival of Alles Schwindel involves cartoonish sets, absurdist costumes and expressionist make-up – and an energetic cast through almost three hours of bawdy burlesque and savage satire […]. Leading man Jonas Dassler, a new star at just 21, chases a girl and a stolen pearl necklace through a flimsy plot with its roots in deceptive lonely hearts ads, a conceit familiar to a young audience drawn from the Tinder/selfie generation. They howl with delight at the show’s panopticon of Weimar Berlin life: a lisping prostitute and a salty Berlin cleaning lady – a standout Catherine Stoyan – employed to dirty a pub’s interior to meet its patrons’ authenticity expectations. Any similarities to today’s Berlin hipsters is, of course, completely coincidental.”

After the premiere at Gorki, Alles Schwindel returned regularly in the house repertoire, constantly evolving and changing in the way the actors accentuated their scenes. Which made it a joy to see the production multiple times.

But then came you-know-what and Alles Schwindel disappeared. Additionally, leading man Jonas Dassler – who delivers what I’d call one of the most knock-out operetta performances of recent memory, catapulting himself right to the top drawer category of Dagmar Manzel, Max Hopp, Katharine Mehrling and Christoph Marti (or Max Hansen and Louis Treumann) – left the ensemble and started a new acting job in Switzerland. So it seemed that Alles Schwindel might be gone forever. With only memories (and a trailer) lingering on.

Now, Gorki announced that it will present a stream of the show on 24 December, 2 hour and 15 glorious minutes, and leave that stream online for the following three days, i.e. the entire holiday season. To watch, you need to pay 5 Euros (or 3 if you consider yourself eligible for a reduction). That’s half of what the cheapest live theater tickets at Gorki cost, so you could call it: a bargain.

Considering that this show has never been available online before – with English subtitles! – this is a real treat. Especially for those who have not yet seen this fascinating alternative to Barrie Kosky’s more razzle-dazzle “showbiz” approach to the genre. Christian Weise’s staging creates a different kind of magic that allows for interesting comparisons, like putting an Alan Ball series next to a Ryan Murphy production.

The piece itself is obviously worth knowing, because Spoliansky’s music works so much better in the context of a nuanced plot instead of the usual “Best of” concert offerings. (Christian Weise already proved how great Spoliansky/Schiffer operettas work with Wie werde ich reich und glücklich in Weimar.)

For more information on leading man Jonas Dassler click here, and for the complete “Letter from Berlin” by Derek Scally in the Irish Times, click here.

Alles Schwindel will be streamed on the website “Dringeblieben” (“Stay at home”). In the best of all possible worlds a DVD release should follow, especially since so many in the cast have had substantial film careers since the production first opened and when it was filmed. You sense the star quality in every movement, and the charm of everyone involved translates fully through the camera!