I can’t help it. I’m an addict. I’m hopelessly addicted to Komische Oper in Berlin. For me, as an American musician who was reared with the standard American musical diet (opera, symphony, Broadway musicals both old and new), there was no operetta across the Atlantic to speak of, except for the ubiquitous The Merry Widow and Die Fledermaus. 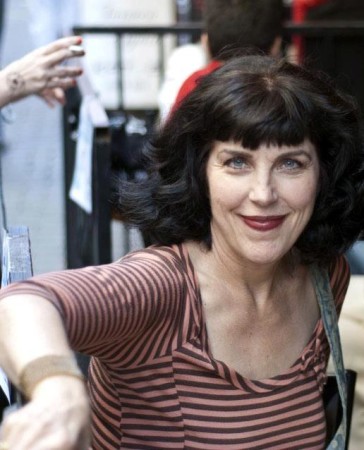 In New York, I had lived for many years in The East Village, where pitiful few remnants of the bygone Yiddish vaudeville theatre existed, and the availability of seeing old films of the stars like Boris Tomashevsky, Molly Picon, and Fanny Brice was purely archival. A few brave and threadbare theatre companies in both New York and San Francisco (there, notably 42nd Street Moon) mounted semi-staged musicals from the 30s. They were a delight and a fascination, because of their comparatively innocent charm to what came to the musical theatre stages in the 70s.

One of my many “Joe jobs,” as we called the many part-time wage-slave gigs to supplement a free-lance musical existence in the Big Apple, was working in the famous Patelson Music House behind Carnegie Hall. Owner Joseph Patelson had begun that business by buying estates of music scores which he re-sold to the public. Several of the shelves were devoted to huge collections of sheet music, including complete sets of songs from American musicals from the ‘teens, ‘20s and ‘30s. With my meager earnings, I bought as many as I possibly could, amassing a healthy collection of original sheet music by the Gershwins, Cole Porter, Irving Berlin, Jerome Kern, and many more. I treasure this music like it’s gold. Not only is it history, it’s wonderful music.

It speaks of life almost 100 years ago in a New York that was imbued with a European accent from the hundreds of thousands of immigrants.

Fast forward to September 2014, when I made the decision to transplant myself to Berlin after nearly eight years in Istanbul, where I had established myself as a music journalist in several publications and taught singing in my private studio. It was only the jazz students who had heard of some of these old songs (they’re called “standards” in the jazz world) but they had no idea of their origin. I longed to step into my Time Machine to travel back to the 1920s in Europe, to witness this music in real time. 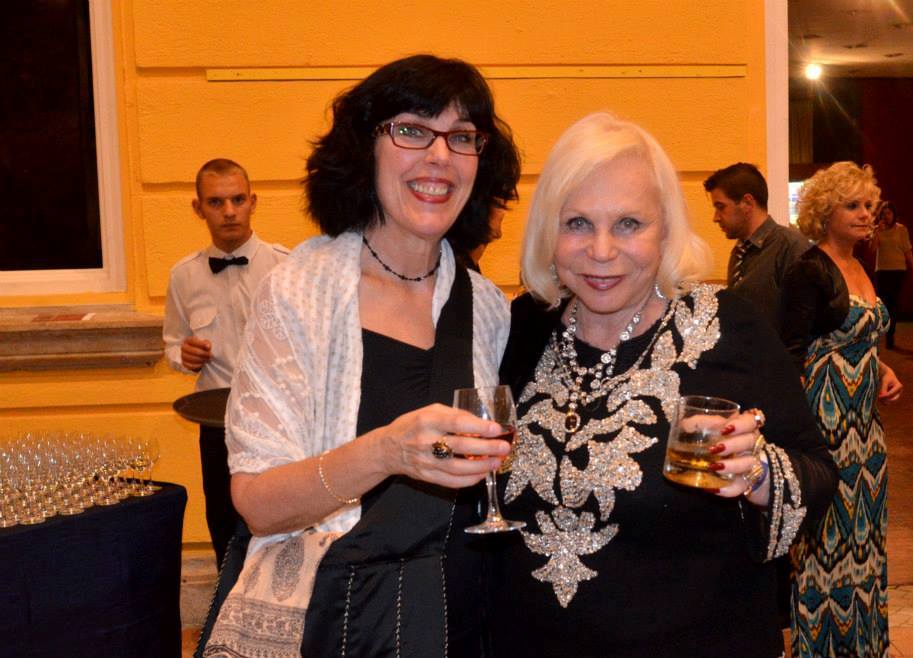 Alexandra Ivanoff and her friend Yvonne Kálmán in Budapest.

Budapest, a city with an atmosphere of faded Belle Epoque elegance, was near the top of my list of possible new places to live. But despite Hungarians’ devotion to their native composers’ music, including operetta, this slightly dusty jewel of a city on the Danube lost out to Berlin, for reasons that have to do with a sense of expanding opportunity. I’m glad I trusted my gut, because Berlin has the Komische Oper! Since this company has been in the magic hands of Barrie Kosky, who has understood my craving to be transported back in time with the energy of a heat-seeking missile, the Komische Oper is the place that feeds my century-old soul. 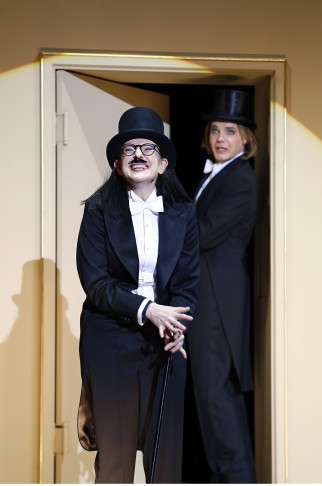 Dagmar Manzel and Max Hopp in a scene from “Eine Frau, die weiß was sie will”. (Photo: Iko Freese drama-berlin.de)

On Jan. 30, I saw the premiere of the 1932 musical comedy Eine Frau, die weiss, was sie will! (A woman who knows what she wants!) by Oscar Straus (1870-1954), a composer, who like Emmerich Kalman, chronicled in music and theatre so much of society’s transition from one century to the next. This production is the first since its original premiere 83 years ago with the same company.

One of those quantum leaps in public mores was the emancipation of women from hausfrau to public figure. In the case of this 90-minute musical, the titular reference describes, via superbly comic stratagems, a woman’s right to have affairs on an equal playing field to men’s historical entitlements in the l’amour department.

With a text by Alfred Grünwald and based on Mademoiselle ma mère (1920) by Louis Verneuill, the show has a tour-de-force trajectory with only two people playing multiple roles. And not just a few: Dagmar Manzel plays six, including the glamorous Manon Cavallini, the central plot figure. Max Hopp plays a total of 12 characters in a dizzying, brashly vaudeville style staging with lightning-speed costume changes, gags which included hilarious speech defects and a plethora of bon mots, door-slamming schtick, and plenty of gender-bending cross-dressing – even hybrid tuxedo/gown creations. 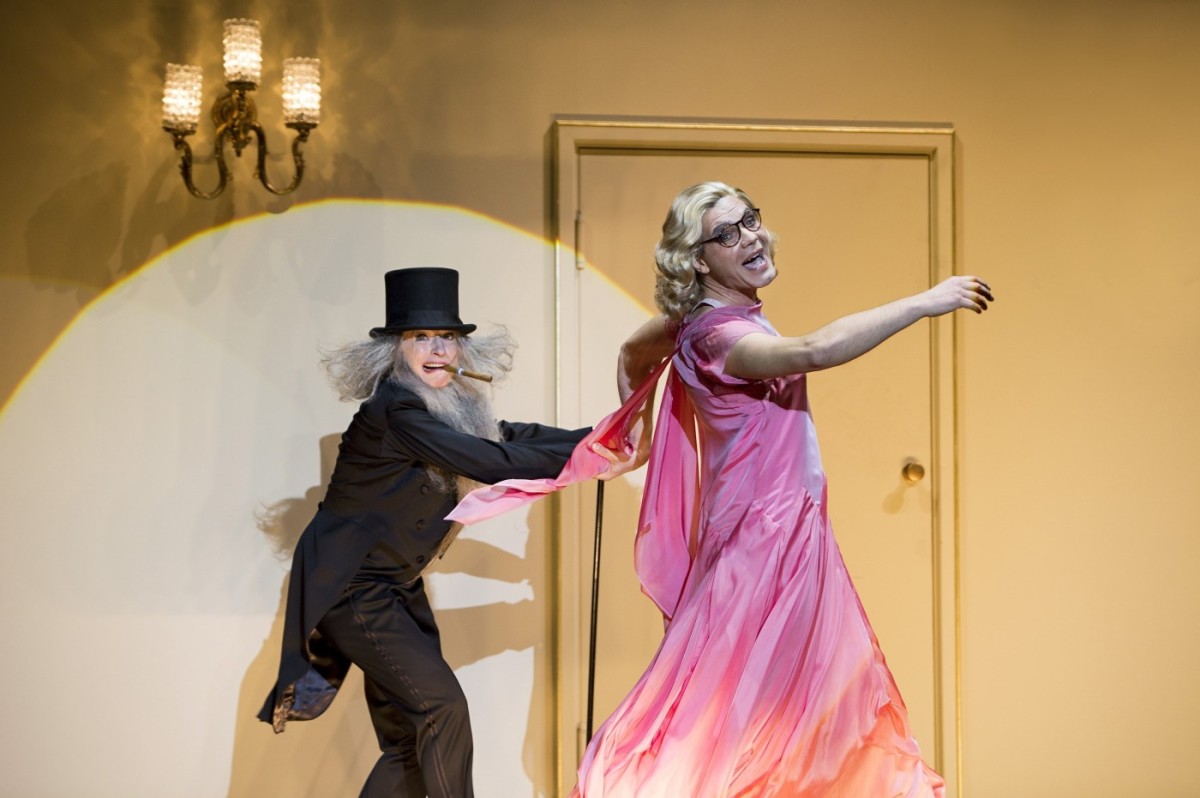 To say that these two performers are amazing is understated; what they do, non-stop, is simply incredible in their physically demanding duo dynamic which undoubtedly recalls the heydey of vaudeville’s hellz-a-poppin’ atmosphere. But in this case, the antics are accompanied by a superb melody-rich song score that sported such sublime phrases as “It’s no coincidence that a rose has a perfume” and “Every woman has a secret longing in her heart for a sweet and forbidden kiss” (one of the more serious and melancholic moments), and supported by an orchestra so ably led by music director Adam Benzwi, who also inhabits every nuance of the production (based on my close observation of his performance).

Nota bene: I was delighted that the costume-change crew from backstage stepped out to receive their highly deserved applause. Without them, this stopwatch-speed production couldn’t happen.

The premiere on Jan. 30 was preceded by an especially moving ceremony in front of the main entrance of the Komische Oper building, where three “Stolpersteine” were planted in in the sidewalk next to the front steps. These cobblestone-sized brass memorial stones join the tens of thousands of such Stolpersteine in Germany, and serve to memorialize victims of the Holocaust. Komische Oper’s stones were inscribed with the names of Fritz Spira, Kuba Reichmann, and Hans Schapira, all of whom worked in various capacities at the Metropole Theatre, the original building of the Komische Oper. As Kosky remarked at a post-show reception, “These Stolpersteine are [also] one of the best ways to remember this music, and the time in which this music was forbidden.” 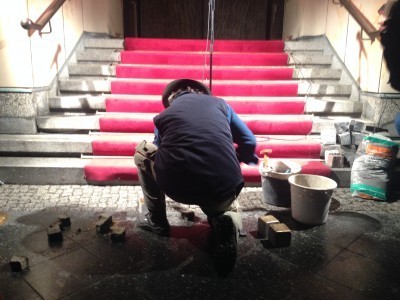 Laying down the “Stolpersteine” in Behrenstraße. (Photo: Komische Oper Berlin.)