As this Off-Broadway revival of Richard Rodgers and Oscar Hammerstein’s 1947 failure Allegro is directed by John Doyle – he of actors-playing-their-own-instruments notoriety – you may be wondering whether this is indeed one of those productions. In fact, it is, though in a highly stylized show like Allegro which traces a small town doctor’s rise from birth to young adulthood to big city disillusion and back again to his roots – the action narrated by a sort of Greek chorus – the conceit simply serves to add one more unobjectionable level of stylization. 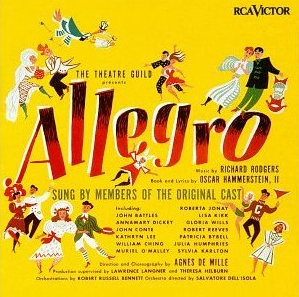 The original cast album of “Allegro.”

The show came between Carousel and South Pacific in the R&H canon. Though Allegro can’t be said to be in the same league as either of those, it’s still a lovely score, as the truncated original cast album, and the two-disc all-star studio recording from 2009 amply demonstrate.

But in this minimalist production – finely performed by a versatile cast as it is – one misses the lush Robert Russell Bennett orchestrations, and the lively stretches of Trude Rittman dance music (not to mention the Agnes DeMille choreography that went with it).

That said, there are compensations. The dramatic aspects of the story are very much heightened, particularly the frenzied Chicago sequences where our small-town hero, Joseph Taylor, Jr. is ultimately disheartened by the shallow and frenetic lifestyle. 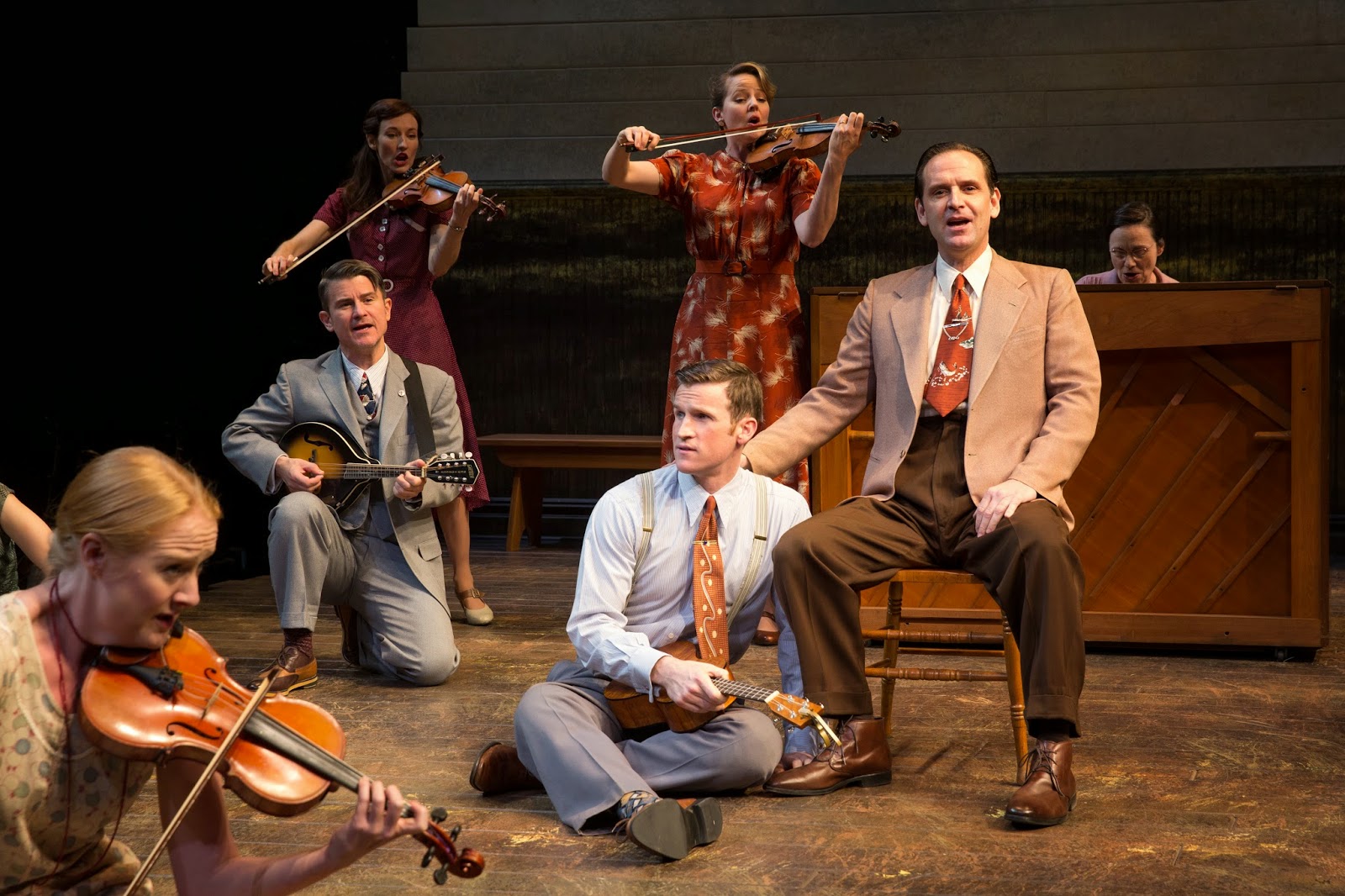 Considerably cut, the show plays out in 90 intermission-less minutes, and even the sentimental ballads like “A Fellow Needs a Girl” and “So Far” seem a tad rushed, though the speedy tempi have a dramatic point with later numbers like “Yatata” and the title song.

Claybourne Elder, with his boyish demeanor and crooked grin, makes a perfect Taylor, playing the role convincingly from babyhood onwards, and he builds in dramatic power as the show progresses.

Musical veteran Malcolm Gets is predictably fine as his small town physician father. Jessica Tyler Wright as Joe’s mother Marjorie projects the requisite warmth. Elizabeth A. Davis is appropriately cold and calculating as Joe Jr’s small-town girlfriend Jenny, and Ed Romanoff is excellent as her no-nonsense father who’d rather have Joe ditch his ideals and join him in the coal and lumber business, though perhaps both have been directed to play a little too villainously.

In any case, Marjorie’s confrontation scene with Jenny is one of the strongest written in the show, and Wright and Davis play it extremely well.

Jane Pfitsch inherits Lisa Kirk’s original star-making role of Emily, the dedicated nurse who helps Joe find his moral compass, and sings “The Gentleman is a Dope,” with anger and intensity, rather than the rueful frustration the lyric suggests.

In fact, the latter part of the whole production is played with escalating intensity, rising to a nightmarish cacophony with, at times, dark shadows thrown on the wall, and at others, house lights raised as if perhaps to indict the audience for their materialism and superficiality.

The sound of a throbbing heartbeat underlies all, an interesting touch.

Considering the show is such a rarity, it’s ironic that this is, in fact, the year’s second Allegro, following, as it does, the Astoria Performing Arts Center‘s very fine production in May, astutely directed by Tom Wojtunik. No instrument playing there, but instead, a talented cast that did its own dancing. The playing area with audience on three sides was similar to the setup at CSC. The APAC production was, on the whole, more true to the show’s original structure, but quality of the casting was more variable.

At CSC, those ubiquitous instruments, though impressively handled by cast members – some playing more than one throughout the course of the evening – are sometimes distracting, though Doyle never employs them for less than intelligent dramatic effect. When Joe’s college girlfriend Beulah sings the romantic “So Far” to him, for instance, she’s blocked at one point by Jenny blocking Joe as she plays the violin.

The death of Joe Jr.’s mother followed abruptly by the lively “What a Lovely Day for a Wedding” sequence registers powerfully, too, in Doyle’s staging.

While not a definitive Allegro – any more than the recent Broadway “Porgy and Bess” could replace the Gershwins’ full-scaled original – taken on its own terms, Doyle gives us a highly creative take on a problematic work, but I can’t help thinking his methods would have pleased Oscar far more than Dick.