This week-end, a new production of Offenbach’s La belle Hélène premieres at the Komische Oper Berlin. Its director, Barrie Kosky, has recently been hailed “The Savior of Operetta in the 21st Century” by the German newspaper Die Zeit. In this context, it is only befitting that the new book by Volker Klotz also comes out now, since he was – for many – something of a “Savior of Operetta in the Late 20th Century.” 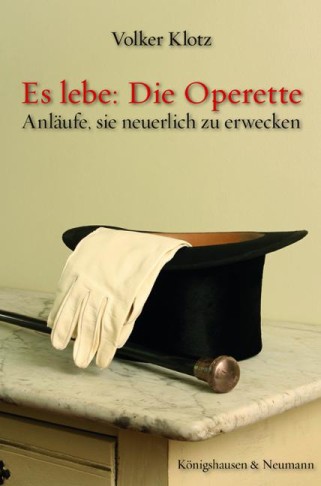 His Operette: Porträt und Handbuch einer unerhörten Kunst was a milestone in German language operetta research. It has influenced at least two generations of theater directors and dramaturgs, not to mention journalists, in their evaluations and discussions of the genre. His new book is entitled Es lebe: Die Operette (“Let Her Live: Operetta”), with a subtitle that claims: Anläufe, sie neuerlich zu erwecken, i.e. “attempts to awaken her anew.”

In his intro, Klotz explains: “The majority of the following notations are the result of my involvement with certain stage productions which tried to put into practice what the author laid out in his pioneering theoretical opus, Operette: Porträt und Handbuch einer unerhörten Kunst.”

Without false modesty, Klotz delves right to the heart of the matter. The professor emeritus, who taught literature at the Stuttgart University, rightly reminds us of his groundbreaking publication that first came out 23 years ago. Back then, it was a primary task to save the art form from its bad reputation and to draw a distinguishing line between operetta and musicals, revues and anything that could be even remotely considered “kitsch.” Klotz strictly differentiated between “good” and “bad” operettas. Or, as he elaborated:

“Like Cinderella’s birds I had to ‘put the good ones into the pot, the bad ones into a crop,’ depending on their satirical and critical tendencies.”

In many instances, Prof. Klotz shot way beyond his target line. For example, a show full of double-entendre and irony such as Im weißen Rössl was branded “reactionary” by him and was banned. The same is true for Paul Abraham’s operettas from the early 1930s which he calls “degenerate,” in accidental (and spooky) accordance with Nazi ideology.

Back in 1991, his famous Handbuch was dedicated to all those “theater people out there: stage directors, conductors and singers.” Many of them happily followed Klotz’s very personal and eloquent recommendations, they dug up forgotten treasures and experimented with titles from his “Cinderella Pot.” In various of these experimental instances, Mr. Klotz cooperated with theaters as dramaturg and adapter (“Bearbeiter.”)

The resulting “reports from the work shop” (“Berichte aus der Werkstatt”) form the major part of the new book.

Most readers, however, will not have seen the productions in question, e.g. Maurice Yvain‘s La Haut in Lübeck 2001 or Emmerich Kálmán’s Bajadere in Erfurt 2003. Those who did see them will remember that the goal “to reactivate stale masterworks with new vigor” was not exactly evident in the final product. Reviews were often disastrous. Klotz sees the reason for these flopped productions in the “miserable working conditions under arbitrary theater directions.” 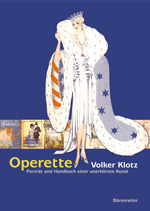 Such a verdict is symptomatic for the deep divide between theory and practice. But that divide is not the topic being discussed in the new book, instead it is its main problem. Klotz accuses stage directors of a “convulsive need to actualize” operettas, and sees “a fashionable pop-ballyhoo” everywhere, presenting the genre as “grimassing, screaming comedy.”

Of course, Klotz completely ignores the fact that since his original operetta book came out, many highly diverse “attempts” have been made to “newly awaken” the genre, as his subtitle commands. That a house such as the Komische Oper – with fashionable pop-ballyhoo and screaming comedy – plays a key role in this reawakening is indicative. Also the fact that its director, Barrie Kosky, doesn’t give a damn about any supposed dividing lines between operetta, musical comedy or revue. (Nor is he afraid of kitsch.) The consequence? Operetta has finally arrived back where it belongs, on the stage!

Volker Klotz’s new book doesn’t examine any of this, nor does the author look at the promising future of the genre with modern-day audiences. Instead, his focus is only on the past. Klotz disregards the present, and he disregards a young generation who has become curious about the genre, flocking to see entertaining up-to-date stagings, not just in Berlin. At least in one instance, operetta à la Kosky and Klotz are on the same page though. Both their battle cry is “Let Her Live: Operetta!”