You could call it the battle of the biographers. Who will be first? Who will be better? Who will have more new information? Who will win the prize for being “best”? After Paul Ábrahám has been shamefully ignored by operetta researchers in the post-WW2 period, there are now two brand new biographies, plus a third one that had been talked about and that then disappeared, sadly. Now, the first one was actually published: Klaus Waller’s Paul Ábrahám. Der tragische König der Operette. 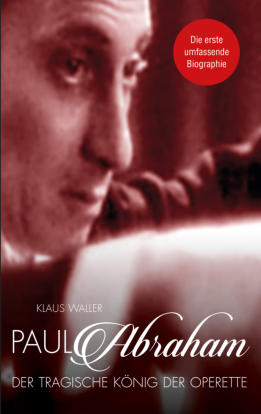 Mr. Waller began his career as a sports journalist; he then became editor of the pocket-book series “rororo tomate” at Rowohlt Verlag. He himself wrote 15 successful non-fiction books on the side, including a biography of Germany’s former chancellor Gerhard Schröder.

Now, he has written another biography and turned his attention to the last “jazz-master” of operetta, before the Nazis put a full stop to such carrying on in operetta land. Waller’s 240 page book had been in the making for some time. Previously, Mr. Waller had established a website dedicated to Ábrahám containing basic info. Now the full narrative follows.

His biography is written in German and is a self-publishing effort, so far, at least. We will have an extensive interview with Mr. Waller on this website soon, but we wanted to alert you to his new book now, since it just became available in Amazon this week.

Meanwhile, Karin Meesmann is putting the final touches to her manuscript of a monumental (read: more than 240 pages) Ábrahám biography.

It will certainly be interesting to compare both books and both perspectives on Ábrahám’s life and works.

Hopefully, this double-effort by Waller and Meesmann will finally overcome the curse of Volker Klotz’s “damnation” of Ábrahám’s “degenerate” revue operettas in Operette: Portrait und Handbuch einer unerhörten Kunst. It has been long enough that Ábrahám’s oeuvre suffered in the German speaking word because of it. People like Barrie Kosky have pointed the way as to how Ábrahám’s operettas can be made appealing and successful again, the opera house in Dortmund will unveil their production of the reconstructed Roxy und ihr Wunderteam in November 2014, and there is still that great film documentary by Janos Darvas in circulation that first showed how much fascinating material there is to discover – and to discuss. Stay tuned.