This very clever new musical is a rib-tickling winner across the board, a hilarious riff on Shakespeare and his times. Brian d’Arcy James as Nick Bottom (yes, all the characters have Bard-like names) is an ever-struggling playwright, turning out flop after flop, as his former crony William Shakespeare (Christian Borle) has nothing but hits, with rock star status among his devotees, particularly as he’s just done Romeo and Juliet. 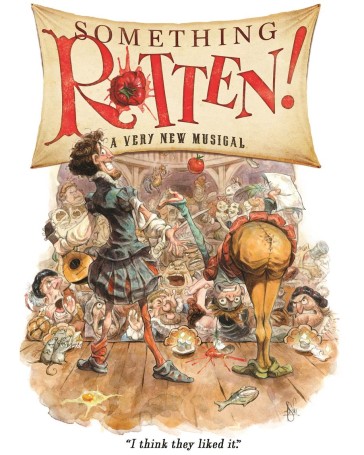 Nick works in tandem with his genuinely talented younger brother Nigel (an appealing John Cariani) who lets himself be swayed by Nick’s half-baked ideas. Desperate for a new idea, Nick decides to visit local soothsayer Nostradamus (Brad Oscar) who informs him that, in the future, there’ll be such things as plays with songs (which we learn in an elaborate showstopper, “A Musical”), so Nick resolves to write the first such work in that genre. Will, meanwhile, is experiencing serious writer’s block (“Hard to Be the Bard”), and plagiarist that he is, contrives to discover Nick and Nigel’s latest opus. Nostradamus, in turn, has confided to Nick that Will’s biggest hit will be something called something like “Omelette.) Very funny complications ensue.

Nigel has fallen hard for pretty blonde Portia (Kate Reinders) who shares his love of poetry, despite the stern forbidding of her light-in-the-loafers Puritan father, Brother Jeremiah, hilariously played by Brooks Ashmanskas with masterful double entendre delivery. That other master of comic timing, Peter Bartlett, scores as Nick’s wealthy patron, and returns as a judge in the second act. And I mustn’t forget Gerri Vichi as a stage-struck “nice Jew” Shylock.

But the blazing star of the show is James who, fresh from his triumph in “Hamilton” at the Public, is simply splendid in a role that affords him impressive range, while his former co-star on the NBC flop “Smash,” Borle is a hoot at a foppish, Jagger-esque Shakespeare.

Heidi Blickenstaff is winning as Nick’s ever supportive wife, and knocks her big number “Right Hand Man” out of the park.

Karey Kirkpatrick and John O’Farrell’s book is consistently funny, perhaps losing just a smidgen of steam in the second act. And the music and lyrics of Kirkpatrick and brother Wayne Kirkpatrick are very clever indeed. Wayne’s experience is mainly in the pop world, but unlike others, his songs hold the stage in a theatrical way.

Scott Pask’s set and Gregg Barnes’ costumes are Tudor perfect.And the show is directed and choreographed with razor-sharp precision by that master of the funny musical, Casey Nicholaw.