The Student Prince was not the first musical to be based on Meyer-Förster’s 1901 Studentenstück Alt Heidelberg (Berliner Theater 22 November). Lázsló Kun added a selection of student songs to the piece when it was produced as Díakélet at Budapest’s Vígszínház (29 October 1904, ad: Miksa Marton; ly: Jenö Heltai), but the first full-scale musical, written by Alberto Collantuoni and composed by Ubaldo Pacchierotti, was the one produced in Milan in 1908 (Eidelberga mia!) and subsequently played at Vienna’s Kaiser-Jubiläums-Stadttheater (Volksoper, 12 February 1909). The original play had been an international success, notably in America where, in spite of having a very limited Broadway life both as Old Heidelberg (1902) and as Prince Karl (1903), it became both a long-touring vehicle for popular actor Richard Mansfield as the Prince Karl-Heinrich who was to become `the student prince’ and a 1915 D W Griffith film featuring Wallace Reid as the prince alongside Dorothy Gish, Erich von Stroheim and Karl Formes jr. 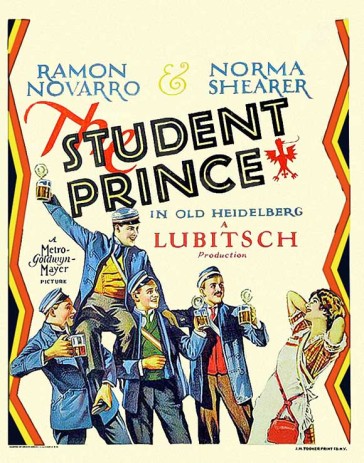 Dorothy Donnelly’s American musical version stuck closely to the lines of the well-known play as the Prince, now called Karl-Franz (Howard Marsh), accompanied by his tutor Dr Engel (Greek Evans) and his pompous valet Lutz (George Hassell), left the cloistered life of his home court and headed off to Heidelberg University for an education in Latin and in life. We see little of the Latin, but his life quickly includes pretty Kathi (Ilse Marvenga), a waitress at his lodgings, to whom he vows eternal love before even a term is over. But Karl-Franz has presumed on his liberty. He is recalled home to the death-bed of his grandfather and ordered, for reasons of state, to wed Princess Margaret (Roberta Beatty). He tries desperately to hold off the end of the only brief period of youthful freedom he has known, but in the end he has to bid farewell to Kathi and follow his duty.

This Leháresque plot provided Romberg with many opportunities for romantic music, but the setting also gave him the chance to include any amount of virile Continental student songs and marches, and, indeed, the score of The Student Prince was made up almost entirely of these two styles of music, the traditional comic element of operetta being relegated to a very subsidiary place. It was, in fact, the masculine music of the piece which was its greatest triumph: Dr Engel reminiscing soaringly over the `Golden Days’ of youth, Karl-Franz serenading the skies in what was to become perhaps the best-known Serenade since Schubert’s (`overhead the moon is beaming…’), and the students raising their voices in the equally famous Drinking Song (‘Drink, drink, drink’). Kathi had a lively showpiece, trilling above the massed male voices in ‘Come Boys, Let’s All Be Gay, Boys’ and joined with Karl-Franz in the evening’s big duet ‘Deep in My Heart, Dear’, a piece which was echoed in the gentler strains of the duo ‘Just We Two’ shared by Margaret and Tarnitz, the man she would really have liked to marry had dynastic considerations not interfered.

The Student Prince had a difficult road to the stage. The Shuberts, for whom most of Romberg’s previous work had been on flimsily built revusical pieces and botchings of foreign shows, had not expected their house composer to turn their old play into a big, florid operetta which featured a sad ending and a big, singing male chorus instead of wedding bells, a walk-down and a female and dancing chorus. At first Romberg got his way. The show went into production with his score intact, the unhappy ending intact and with the 40-strong male chorus he had demanded, all in matching costumes. It also went into production with Patti Harrold, a former Irene star, as its female lead.

Miss Harrold caused the first problem. One day she came to rehearsal and heard some other soprano singing her music. She apparently didn’t wait to find out that Elsa Ersi was both Austrian and unavailable; she flamed, said her bit and she walked. The next contretemps came the moment the piece went on stage at the Apollo, Atlantic City, and Jake Shubert actually saw and heard those men, that music and the ending without a clinch. He started to try to fiddle with the show. When Romberg protested, a row ensued which ended with Shubert taking the composer’s name off the billing and Romberg going to law.. He won his suit in time to get back on the billboards before The Student Prince opened on Broadway to become not only the biggest success the Shuberts had had in years, but far and away the most important original musical they had or would ever produce.

The original production of The Student Prince ran for 608 performances and, before it closed, Shubert was already on the road with the first of what would soon become multiple, long-running touring companies.

For some 20 years The Student Prince was a permanent fixture on the tour circuits in America and it remained a perennial favourite for decades thereafter. It reappeared on Broadway in 1931 (Majestic Theater, 29 January) and again in 1943 (Broadway Theater, 8 June) and in 1980 it was produced by the New York City Opera (29 August), which organisation has been subsequently responsible for keeping the piece in view, most recently in its revival of 1993 (17 August) 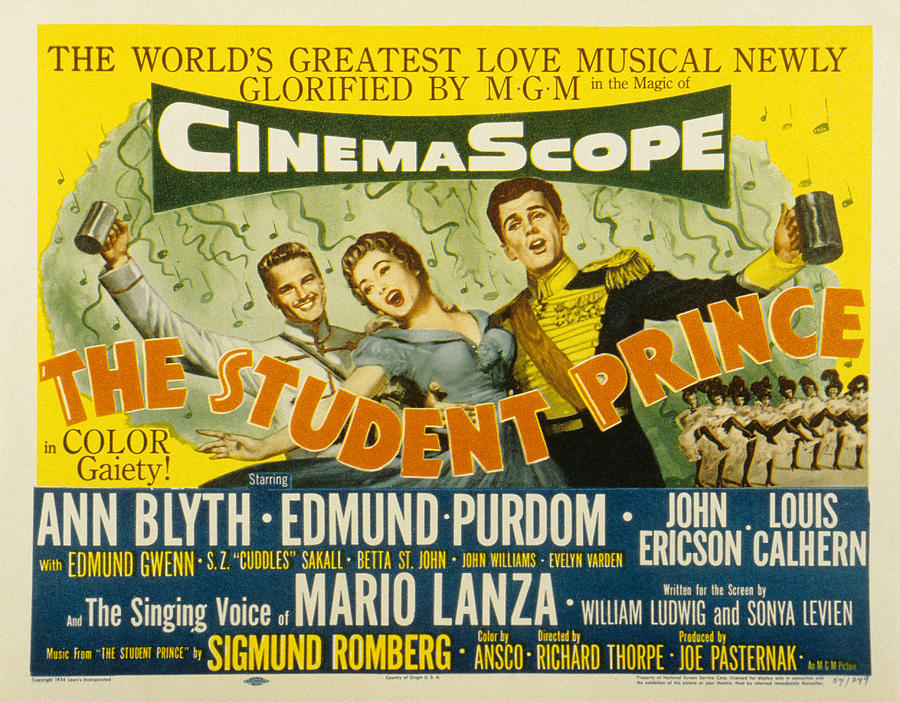 The “Student Prince” in a Hollywood-Cinemascope version.

In spite of its enormous success, however, the piece failed to export with the same success that the other two comparable hits of the era, The Desert Song and Rose Marie, achieved. France, where Meyer-Förster’s Vieil Heidelberg had for many years been a favourite in the repertoire at the Odéon, and which welcomed the other two pieces largely, did not take up this work by a composer who otherwise found a wide welcome in the Paris theatre. A production at Berlin’s Grosses Schauspielhaus in 1932 left little trace, whilst England rejected the show not once but twice. Produced at His Majesty’s Theatre in London with several of the original cast, including Miss Marvenga who was starred opposite Allan Prior as Karl-Franz, it was poorly received and closed after three months and 96 performances whilst Rose Marie continued its triumphant progress at Drury Lane. A road tour convinced producer Edward Laurillard that the show had been unlucky, and he brought it back to the Piccadilly Theatre (7 November 1929) with Donald Mather now starring. This time it lasted 60 performances.

Australia, however, gave The Student Prince a much warmer welcome than Britain had done. The show played for nearly three months in Sydney, after which the Dutch soprano Beppi de Vries (Kathy) and James Liddy (Karl-Franz) featured in a splendid four-month Melbourne run (Her Majesty’s Theatre, 5 November 1927), before the show returned for a revival season in Sydney the following year (Her Majesty’s Theatre, 15 September 1928). It got a further showing in Melbourne in 1929 when it shared the public’s attention with a concurrent run of a film version starring Ramon Novarro and Norma Shearer, and it was brought out again in 1940 by the ‘New Royal Comic Opera Company’, confirming a success which the show had found nowhere else outside America.

In 1944 the show was tried yet again, and yet again fruitlessly, in the West End (Stoll Theatre 23 May), and England, like the rest of the world, got its most appreciated glimpse of The Student Prince via the medium of film — the 1954 MGM picture in which the dashing Edmund Purdom and the voice of Mario Lanza at its peak at last established the show, the title and Romberg’s score (botched with three numbers by Nicholas Brodszky) internationally.. 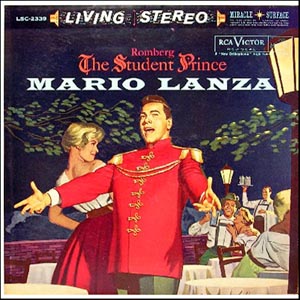 American tenor Mario Lanza singing the hit songs made the music famous again in the 1950s.

Through the years, endless and often cheap tours of the popular operetta slightly tarnished the title of The Student Prince in America, much in the same way that they did with Blossom Time and The Desert Song and with the works of Ivor Novello in Britain. But John Hanson, the darkly tenor hero of many such British tours, had proved he could be a draw in the West End when a 1967 stop-gap revival of The Desert Song had turned into a profitable long run, and he selected The Student Prince as his next vehicle. This sadly botched 1968 revival gave The Student Prince (with additional songs by Hanson) its longest London season, but it confirmed a creak-and-tat image for it which effectively finished it off as a revival prospect.

In 1974 the Heidelberg Festival produced a version of The Student Prince, with American tenor Erik Geisen starring, in the courtyard of Heidelberg castle, overlooking the well-preserved streets of the University city where the action of the play takes place. It has subsequently been performed regularly there, during the summer months.

Although it let such obvious libretto material as Alt-Heidelberg slip past, the Austrian musical theatre did, however, provide a before-the-Romberg-event musical-play sequel to The Student Prince. Jung Heidelberg, with a text by Carl Lindau and Leopold Krenn and a pasticcio score taken from the works of Carl Millöcker by Ernst Reiterer, followed the son of Karl-Franz to a happier ending with a suitable Princess in a production which top-billed Mizzi Zwerenz and Max Brod at Gabor Steiner’s Venedig in Wien (9 July 1904). Jung Heidelberg was seen the following season both in Germany (Neues Königliches Opernhaus, Theater des Westens 1 July 1905) and in America, where it was played in the German-language theatre with Curt Weber and Mariesa Verena in the lead rôles and Lina Abarbanell in breeches as Lieutenant Vogel.