An unlikely subject for a musical perhaps – though, of course, he starred in several – Hollywood tough guy James Cagney’s life makes for a surprisingly engaging evening as star Robert Creighton pays tribute to the man to whom he feels a particular kinship given their physical similarity, in a production of Cagney at The York Theatre Company. 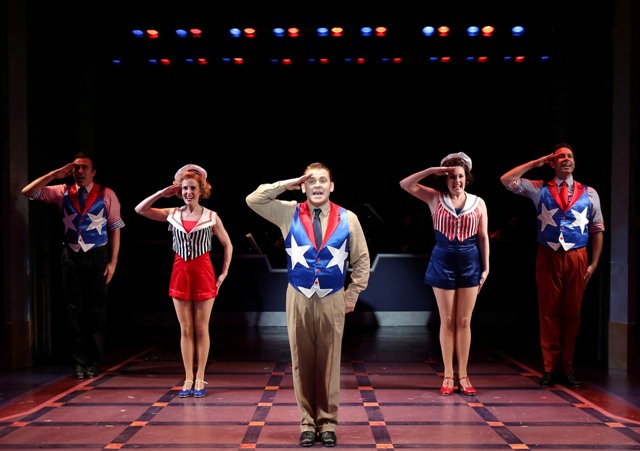 Besides starring as the lovably pugnacious Cagney, Creighton provided music and lyrics for some of the songs, while Christopher McGovern supplied the same for more than a dozen others. Peter Colley’s book, like the musical Chaplin, builds to its titular subject accepting a late career award, in Charlie Chaplin’s case, an Honorary Oscar, in Cagney’s, a SAG Award in 1978.

The play begins with Cagney’s days as a hot-headed construction worker who nobly takes on the foreman who short-changes a coworker on payday. (And kudos to fight director Rick Sordelet for an uncommonly convincing scuffle as Cagney and the man trade punches.) 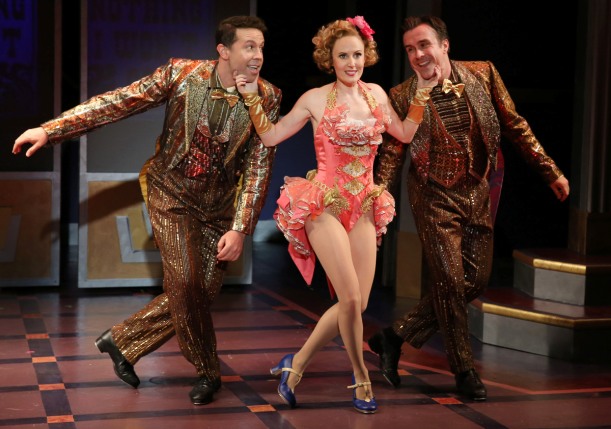 The story progresses through Cagney’s early days in vaudeville where he meets his wife Willie (Ellen Zolezzi), declaring their love in a cute number without actually saying the “l” word. Then it’s on to Hollywood where he finds himself under the autocratic thumb of Jack Warner (a first-rate Bruce Sabath), struggles against the studio system, faces the Dies Committee for alleged Communist sympathies, and finally makes a memorable comeback in “White Heat.”

And, of course, Cagney’s memorable turn as George M. Cohan in Yankee Doodle Dandy gets its due, with “Grand Old Flag” and the title number capping the first and second acts respectively.

The new songs are not bad, never less than serviceable, and there’s a clever rejiggering of the opening number “Black and White,” a paean to movies, as a second act opener when Cagney faces the Dies Commission.

The supporting cast of five is truly excellent, each giving a committed performance though the occasional impersonations of famous folk are patchy, like Jeremy Benton’s Bob Hope. And what is MGM’s star of stars Greta Garbo doing showing up as a Warner Brothers player? Danette Holden is warmly sympathetic as Cagney’s archetypal Irish mother. Other roles such as Cagney’s brother are well taken by Josh Walden. 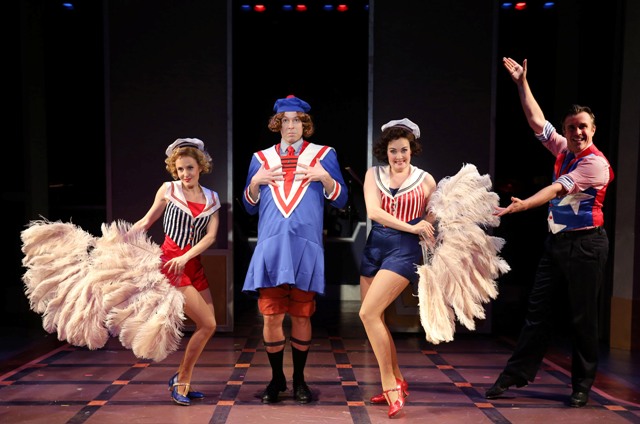 Joshua Bergasse has fashioned some excellent choreography, quite different from his stellar work on On the Town. This is, in fact, the most dance-filled show I’ve ever seen at York. The tap numbers in an extended USO sequence and elsewhere are really exceptional, and the cast shows their mettle here.

Bill Castellino directs at a fast-moving pace, and the narrative, though yes, clichéd and perforce sketchy, is never less than absorbing. Creighton shines in his eleven o’clock number, “Tough Guy,” and does an admirable job of suggesting Cagney aging over the years.

York Artistic Director James Morgan’s sets provide a classy backdrop, and Amy Clark’s costumes, as the actors shuttle between their various roles, are admirable, too.

To read the original article by Harry Forbes, click here.