Could any musical comedy from 1912 be more up-to-date from today’s war-on-terror-perspective? This is the story of a revolution of Southern European street people against the “rich and powerful” above, the attempted assassination of the head of government with a bomb that’s smuggled into the palace in act 1 by a celebrated prima donna in her handbag … and defused by a stein of pilsner a little while later. Add to this some erotically charged tango dancing, and a happy end in exile without marriage. Combined, these elements made Emmerich Kalman’s Der kleine König the very model of a model modern operetta, and one of the greatest flops of his career. Over a hundred years after the world premiere and subsequent total disappearance of Der kleine König, the show made a comeback at the Ohio Light Opera in 2014; this OLO production is now available on DVD; the first ever recording of this “conglomerate of drama play, grand opera, operetta, farce, burlesque, vaudeville dance, movie dramatics, and animal training,” as Richard Specht described the show in 1912. 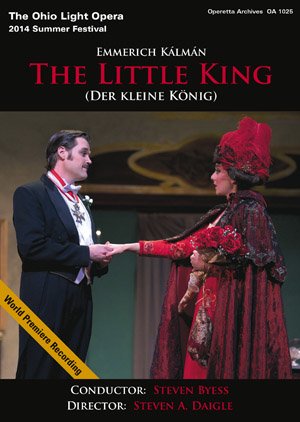 DVD cover for Kálmán’s “The Little King” from Ohio.

As anyone familiar with the OLO production style knows: the university campus theater in Wooster, Ohio is not the place for daring or radical stagings; on the contrary, most operettas there look (and sound) the same, honoring Richard Traubner’s ideal: “Operetta! Flowing champagne, ceaseless waltzing, risqué couplets, Graustarkian uniforms and glittering ballgowns, romancing and dancing! Gaiety and lightheartness, sentiment and Schmalz.” (From: Operetta: A Theatrical History, revised edition 2003) This is certainly the ideal of Steven A. Daigle’s staging of The Little King, sung and acted in English, in a new performance version by Daigle. It’s a pretty straight forward telling of the story set in Portugal, covering the more daring elements of the original story by Karl von Bakonyi, Franz Martos and Robert Bodanzky under layers and layers of old fashioned “operetta costumes.”

Luckily, the Portugese soldiers dominating act 1 look rather attractive in these blue and white uniforms, as if they’d all just stepped out of the Student Prince production. Nathan Brian as the Colonel gives you some idea how much more fun could be had with this story. And Gretchen Windt as the discarded mistress of the king of Portugal, marching in and flirting with the soldiers, is definitely on the “naughty” side of operetta: fun to watch and listen to in the more mad-cap comedy moments, especially her grand seduction scene.

An explosive rendezvous with a bomb under the table: Natalie Ballenger as revolutionary Anetta Montarini and Clark Sturdevant as the (not so) LIttle King. (Photo: Ohio Light Opera)

The ‘serious’ main couple, though, Clark Sturdevant as the king and Natalie Ballenger as the prima donna Anita (here: Anetta) Montarini, are not an explosive coupling where you would believe that she’d bring a bomb along to her first rendezvous, and then defuse it when she finds out that this king she plans to blow up is actually not the monster her fellow revolutionaries claim he is. There is little erotic sizzle between Sturdevant and Ballenger, as directed by Daigle, which makes the central story line about an early 20th century people uprising (based on true events) seem very dated – which it is not!

The abdication scene, in act 2, where the king (Clark Sturdevant) leaves his country to go into exile – with his dog. (Photo: Ohio Light Opera)

On the plus side of this DVD version, there are English subtitles, making it easy to follow the new lyrics, even in the chaos of the grand revolutionary finales when the Portuguese storm the palace and drive the king out. He leaves with his dog, whistling, accepting his fate. It was, originally, a role written for Louis Treumann, the world’s first Danilo, who used this moment to demonstrate what it means to be “cool.” In 2014, the concept of “cool” is not one at the top of the list of OLO. Which is a shame, because you can tell from snippets of dialogue how much potential and crazy possibilities this show offers, with many strongly sketched interesting characters: the army representatives, the revolutionaries, the shady ladies of the court, the king, the beggar Huck (Anthony Maida), the suicide bomber prima donna et al.

This is a first chance to actually see and hear Der kleine König, and that is the greatest plus of all. The show is fascinating, as a story, but also as a score. The Neues Wiener Tagblatt wrote in 1912: “Of all the music we have received from [Kalman], this, his latest, is at any rate the best, the most beautiful, the most haunting.” There might not be any “hits” – as the Neue Freie Presse stated – but it’s perfectly constructed and effective modern operetta music, showing how much Kalman was concerned with being at the forefront of the modernization movement, even before he started with his “jazz operettas” in 1921. The “American bear dance” (as the Illustriertes Wiener Extrablatt described the tango scene) is an interesting forerunner to Kalman’s later shimmies, charlestons and foxtrots.

The other plus sides: Gretchen Windt as the comedienne, with mr. Maida as a vaudeville-style partner by her side, lifts her scenes off the page. The dazzling soldiers, with Nathan Brian at their center, are another joyful watch, the revolutionary choruses are stirring. And the ‘shocking’ happy-ending-without-marriage – in which the king and his new mistress Anetta retire to an island, to live together in exile – includes the famous tango, which is worth knowing if you are interested in Kalman music.

The filming is as straightforward as the staging, but it offers various close-ups to keep watching this DVD edition interesting. The Little King actually comes across more dynamic on DVD than it did, live, in the theater of Wooster. The sound quality is good, as long as you don’t expect (a)rousing orchestral playing from the small OLO orchestra conducted by Steven Byess.

Natalie Ballenger as Anetta Montarini leads the revolutionaries to battle with a “Freedom’s Song” in act 1. (Photo: Ohio Light Opera)

This could be the beginning of a rediscovery of Kalman’s Der kleine König. It’s a story and a score that is worth taking a second look at; and the DVD issue – made possible by Michael Miller of the Operetta Foundation in Los Angeles – is an invitation for all those operetta directors out there on the lookout for something novel. Der kleine König would be a perfect show to restage in Europe today, in Budapest, Berlin, Dresden, Munich, Vienna – or Portugal.

You can read more about the show in Stefan Frey’s English Emmerich Kalman: An Operetta Biography, also released by the Operetta Foundation in 2014, the year of this OLO staging.

To order the book or DVD directly from Los Angeles, click here. For more background information on the show, its original interpreters etc., click here.