Encountering Im weißen Rössl in its French version can be a joy, as anyone knows who has ever heard Bourvil as Léopold on the 1960s EMI recording conducted by Félix Nuvolone, not to forget the superlative original cast recording from Paris 1932/33 where you get Georges Milton as a Léopold who can actually stand comparison with the one-and-only Max Hansen. There haven’t been any French language production on CD or TV for a while (not to mention DVD), so the new version from the Opéra de Lausanne is noteworthy. 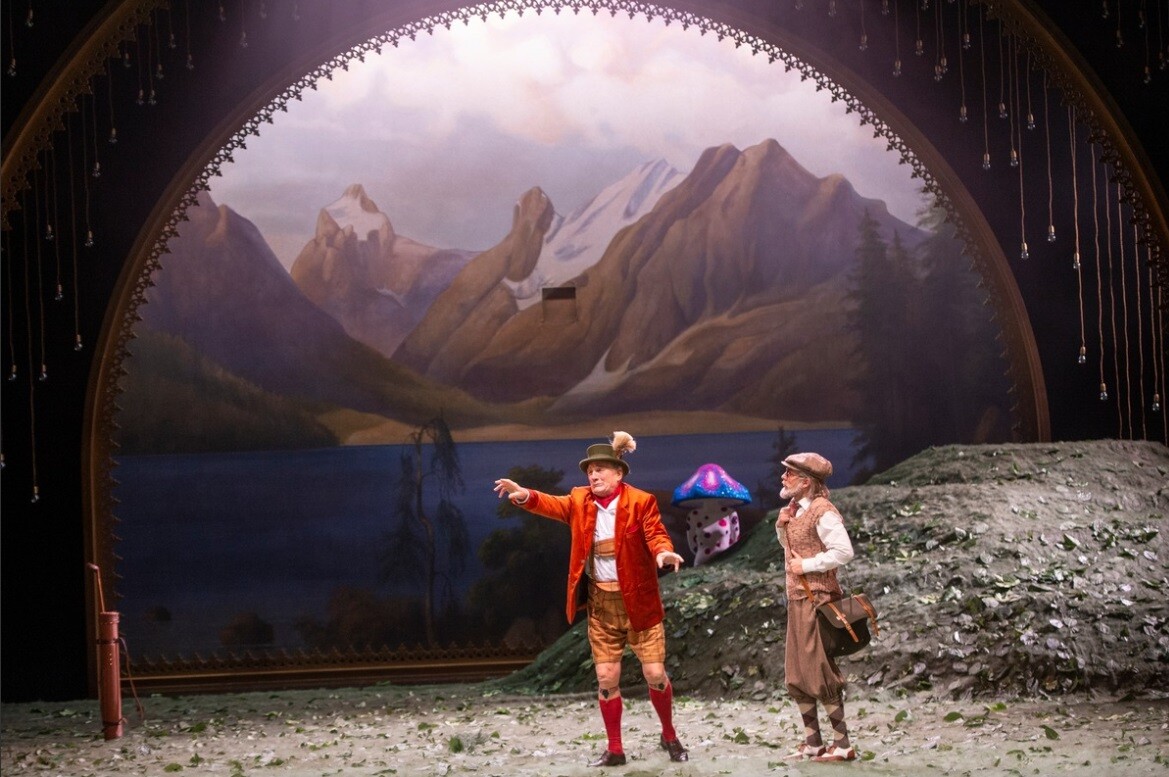 The 2021 staging by Gilles Rico with full chorus, ballet, symphony orchestra, opera soloists and opulent gilded sets is currently available for streaming on the “cultural channel” arte (until June 2022), as part of their “The European Opera Season” selection. Which is especially valuable for all those who cannot go see shows at the moment because of Corona restrictions. Also, to include the famous Erik Charell/Ralph Benatzky show and sandwich it between Smetana’s Dalibor, Rossini’s Il barbiere di Siviglia and Catalani’s Edmea is bold – or a sign of a new diversity consciousness in the high culture department of state funded TV station arte.

If you do a little Google search on the stage director, you get this information: “Gilles Rico holds a doctorate in music and philosophy from Oxford University.” That would indicate that he is an artist with some sort of intellectual grasp who could be expected to fathom – at the very least – the basics of a show such as Im weißen Rössl. Especially since that has a fool-proof libretto by the experienced film script writer Hans Müller that always works its magic, no matter what you do in terms of interpretation. Or so you might have mistakenly thought.

Watching Mr. Rico’s production on arte I already began to wonder in the opening scene whether the stage director had bothered to read the libretto. And that wonderment continued, almost uninterrupted, till the final scene. While Rössl is usually easily recognizable because of its Alpine setting and the folkloristic costumes, in the Lausanne version everything is relocated to what looks like a recycled Babylon Berlin nightclub, with golden curtains, candle holders (that make Phantom of the Opera look under decorated by comparison) and a cocktail bar counter. Plus, lots of blinking lights. 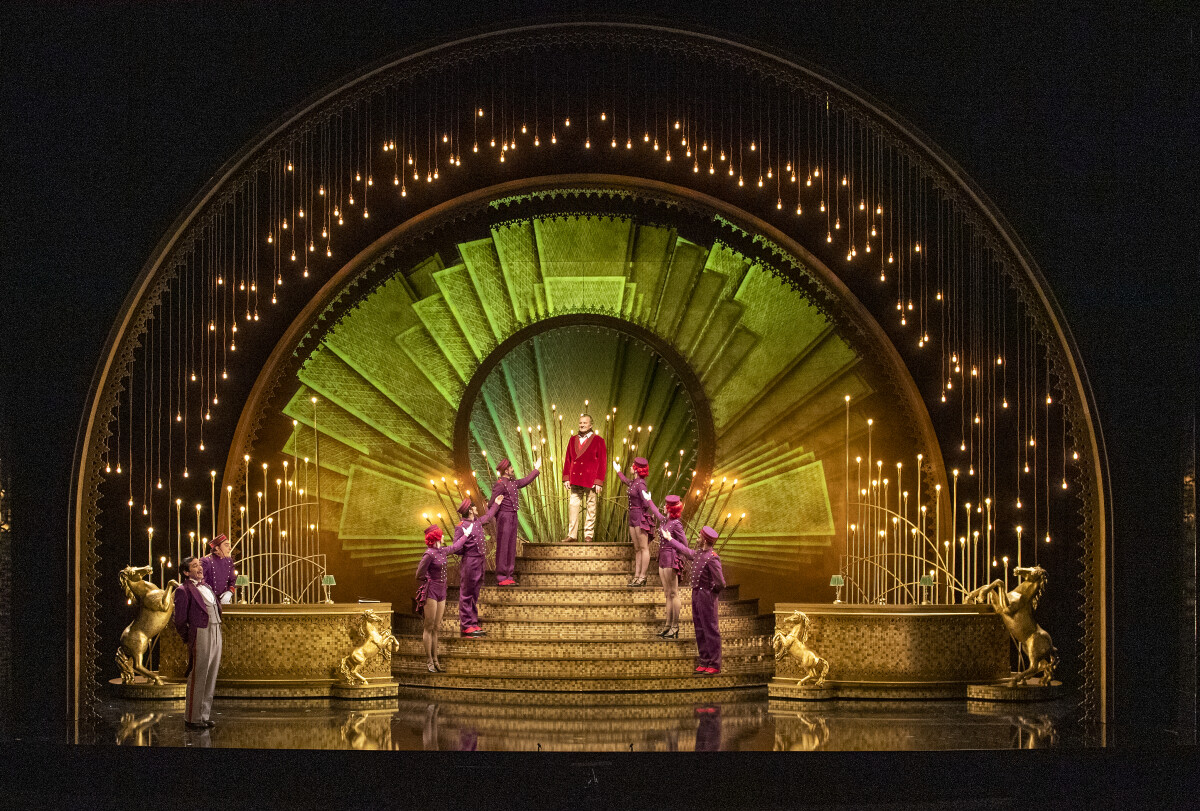 The yodeling Kathi (Miss Helvetia), right at the start, comes up in such a blinking circle as a Mistress of Ceremonies in a costume that would fit into a Baz Luhrmann glitter-and-be-gay movie. You could argue that the original 1930 Rössl was part of the Babylon Berlin world, and that (yes!) there is a glitter and be gay aspect to Charell’s oeuvre. But how this connects here with the story is a mystery to me.

On top of that, Kathi runs around with a pink poodle, played by a half-naked muscle guy with a doggie mask and perfectly chiseled torso. And pink extras. Kathi is actually referring to her goats as the sings and delivers dialogue (with subtitles). But hey… never mind. Pink poodles and goats can apparently be mixed up if you hold a doctorate in music and philosophy from Oxford. 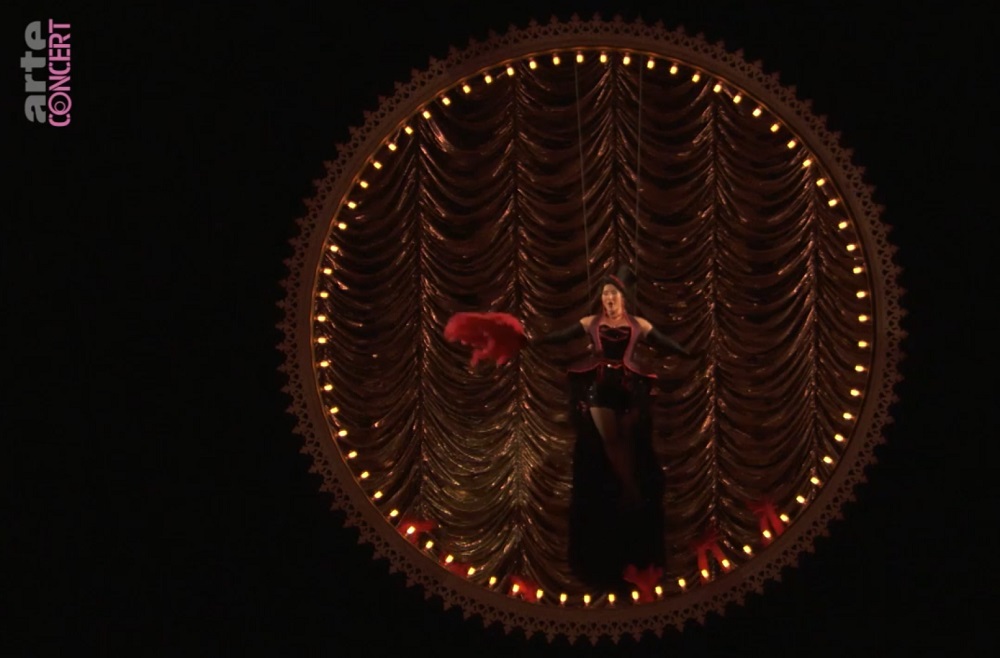 When the guests arrive in St. Wolfgang – in the first scene – they are more or less dressed like tourists today. Yet the world of the hotel has a strong art deco tint, and also looks like straight out of Babylon Berlin. So the rest of the performance makes you wonder if it might not have been better to play Ball im Savoy in this ambiance, with the hotel proprietor Josepha (Fabienne Conrad) looking very posh and singing her famous “Ainsi va la vie” (“Ist einmal im Leben so”) with a high note at the end that would befit the Marschallin at the end of act 1 in Rosenkavalier.

As the story unfolds – with Mathias Vidal as Léopold – and we move from one party gathering to the next and a few badly executed dance numbers and butterfly ballets in-between, e.g. for “Mon chant d’amour es tune valse” (choreography: Jean-Philippe Guilois), there finally comes the scene with the Emperor. If you thought Kathi and per pink poodle were a bit weird, wait till you see Patrick Lapp as a confused L’Empereur in a night gown, accompanied by two nude hunks (chiseled once more!) in gold briefs and nothing else, standing left and right like security guards and whispering cues into his ear when he forgets what the next line of dialogue is. 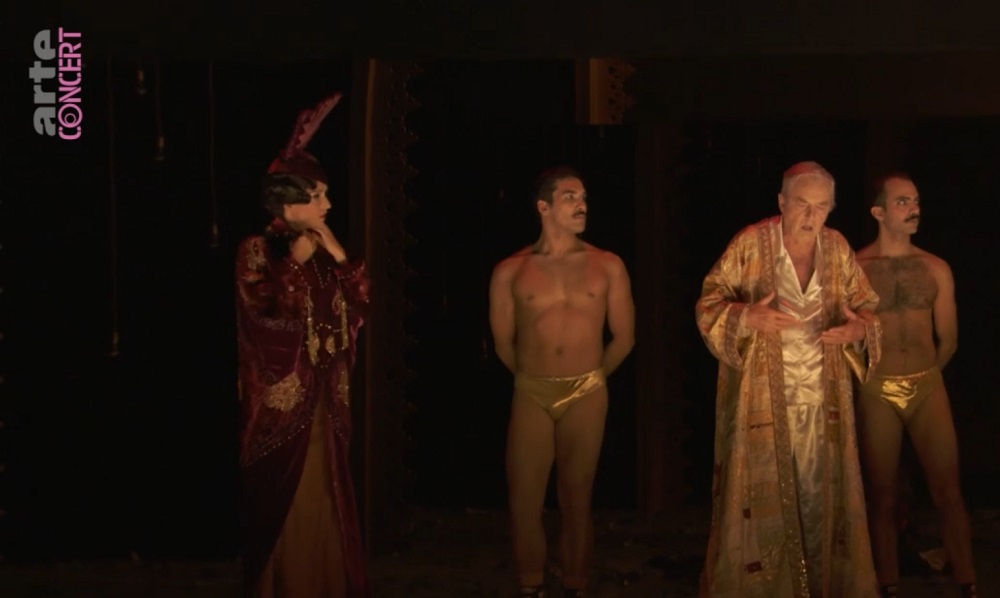 Years ago, Sebastian Kreyer presented an LGBT version of Im weißen Rössl at Theater Bremen, with Desirée Nick. (Read more about it here.) It might not have been the most convincing of productions but at least it was clear about what it wanted to do – and did just that. With a lot of cross-dressing, gender-bending and queer reading.

Here, in Lausanne, the camp elements (if you want to call them that) are all over the place, and equate camp with gay, but they don’t mean anything, they are not utilized for a new perspective on the story (as was the case with Mr. Kreyer). They are mere decoration. And, at least for me, they are very confusing. Because in this tight-knit story suddenly nothing makes sense anymore.

It seems Mr. Rico was merely interested to show … what exactly? A night at a decadent club, where champagne bubbles float around, and everyone is dolled up in Roaring Twenties costumes? With music that only sporadically fits this concept, and mostly clashed with it? 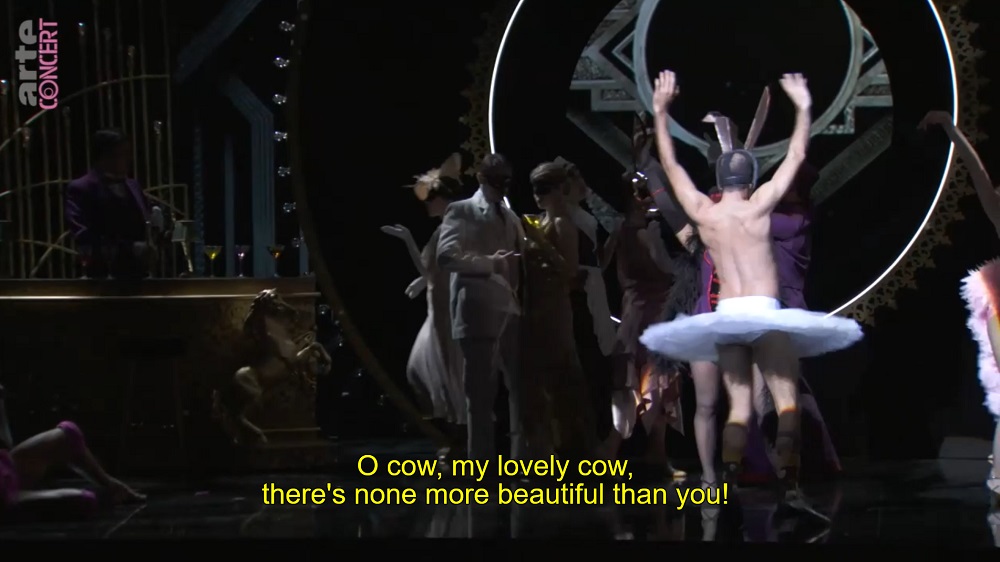 At the end of the performance, the production team comes onto the stage for the applause. And the audience in Lausanne continues to clap, as if what they’ve just seen for the past 141 minutes were perfectly acceptable. And arte broadcasts it as part of their elitist cultural program without questioning whether this is nothing short of a declaration of bankruptcy with regard to operetta. Conductor Jean-Yves Ossonce doesn’t set the record straight either.

You can watch the filmed version for yourself and form your own opinion, of course. Here’s the link to the arte website.

If this production leaves you as flabbergasted as me, I recommend turning to the 1932/33 recording of highlights. It’s the only available historical recording that offers the original orchestrations as heard in the theater – the Max Hansen recordings are with dance band accompaniment – and the Marianne Melodie release also offers the first and (!) second cast of the Paris production, staged by Erik Charell himself. Lucien Dovral is a fascinating alternative to Georges Milton; and in his way, so is Bourvil.

Kurt Gänzl writes about Bourvil in Musical Theatre on Record: “To hear Bourvil, in his crinkly, laughter-filled voice, inviting the tourists to ‘Regardez ce soleil’, courting his Josefa with winning charm (‘Pour être un jour aimé de toi’), heading off casually to join the army in ‘Adieu, je pars’, tipsily drowning his sorrows in a Tyrolienne, and playing out the final, foolishly happy scene of the show, is to hear musical comedy at its most irresistible.”

In opposition to that you might say, hearing and watching the production from the Opéra de Lausanne is witnessing operetta at its most off-putting and mindless. Or in a way that Richard Traubner once described as “Flowing champagne, ceaseless waltzing, … glittering ballgowns, romancing and dancing! Gaiety and lightheartness, sentiment and Schmalz.”

If that’s all you want from this Charell/Benatzky show in Switzerland (and on arte) then Mr. Rico is the deal! I wonder what his fellow students and teachers from Oxford would have to say about this.