With all the attention being given to Offenbach, it is easy to forget that 2019 is also the bicentenary of Franz von Suppé’s birth. As Kurt Gänzl reminds us, Suppé composed more than 200 stage works and should be considered as the ‘father of Viennese operetta’, even if there is a ‘limited appreciation’ of his music at the moment! Therefore, all praise to Theater Chemnitz for staging a revival of his 1878 revue operetta Der Teufel auf Erden, which had an unsuccessful run of twenty performances at Carltheater Wien, where Suppé was conductor, in 1878. It was then not performed again until 1984, as a radio broadcast. 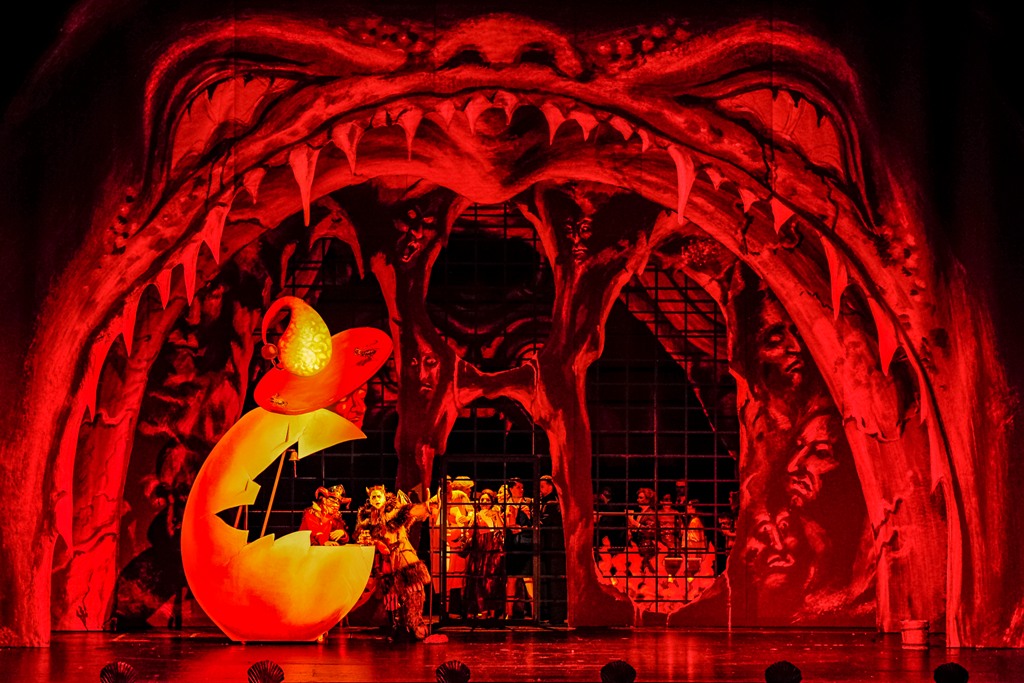 By far the most successful moment of the Chemnitz revival was a short ballet at the start of Scene 3, danced by two boys (devils) and four girls (angels) from the opera ballet school, all of whom must have been under 16, to the music of the overture to Suppé’s Die Frau Meisterin. This had real energy, life and inventive choreography, as well as precise dancing and humour; it deservedly won the longest and loudest round of applause of the evening.

The plot (libretto by Karl Juin and Julius Hopp) of the 1878 Devil on Earth concerns a revolt in Hell: in Scene One the inhabitants demand Freedom of the Press, abolition of serfdom and a democratically elected parliament. Satan and Mephistopheles want to crush this revolt but their henchmen Lucifer, Samuel and Beelzebub are on holiday on earth. So they go to earth to find them and bring them back. This sounds fun and certainly relevant to the politics of 2019!

Therefore the director, Hinrich Horstkotte, asked Alexander Kuchinka, who plays the role of the Devil in this production (clearly enjoying himself), to rewrite the libretto! 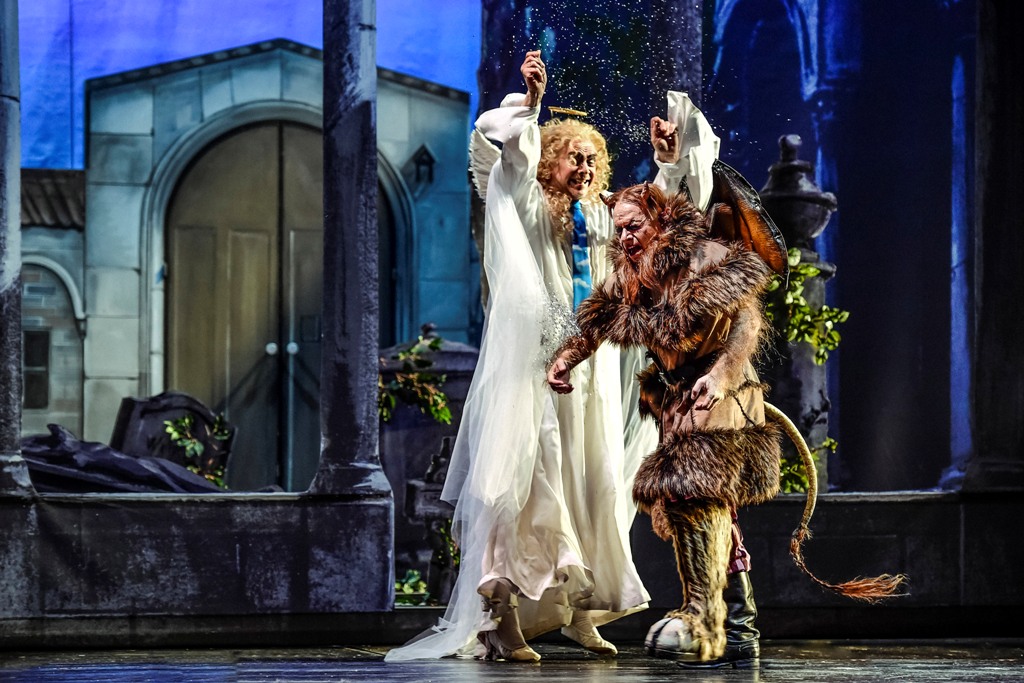 Mr. Kuchinka decided to change the plot completely – in his version Scene one is set in Hell, as in the original, Scene Two in a 17th century nunnery, Scene Three in a 19th century military cadet school and Scene Four in a 21st Century dance school, complete with ‘young’ people (a sort of Strictly Come Dancing for teenagers?), conveniently forgetting that, in the 21st century, young people do not dance to the sort of music that Suppé wrote!

We meet Amalia (Marie Hansel) and Isabella (Sophia Maeno) in the nunnery. They are being pursued by two ‘reprobates’, Reinhart (Reto Rosin) and Isidor (Andreas Beinhauer) because, as the programme states: ‘the devil is in all of us’.

The same couples, under different names, also appear two centuries later in the cadet school, and two centuries after that in the dancing school, together with the devil and Rupert, a retired Angel, played by Matthias Winter. 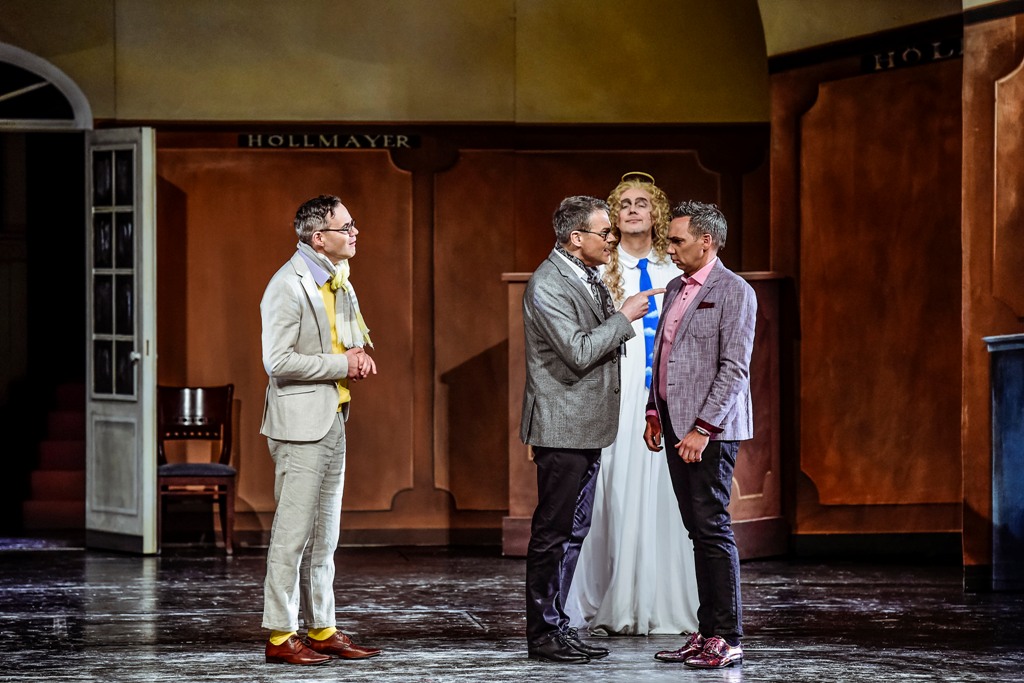 Apart from the ‘new’ plot giving less opportunity for humour – there were very few laughs from the audience throughout the evening – there is no apparent dramatic structure to any of the scenes. Also it is clear that the dialogue was rehearsed separately from the musical numbers. Throughout it lacks any energy, just meandering along until the next song happens to occur!

The usually superb Chemnitz chorus is, on this occasion, swamped by what it is being asked to do. Either the choreography (Sabrina Sadowska) is too complex and/or not enough rehearsal time has been allowed, because although a few members perform satisfactorily the movements they have been given, most don’t appear to know what they are doing, and a few have just given up and stand still, which is probably the right thing to do! 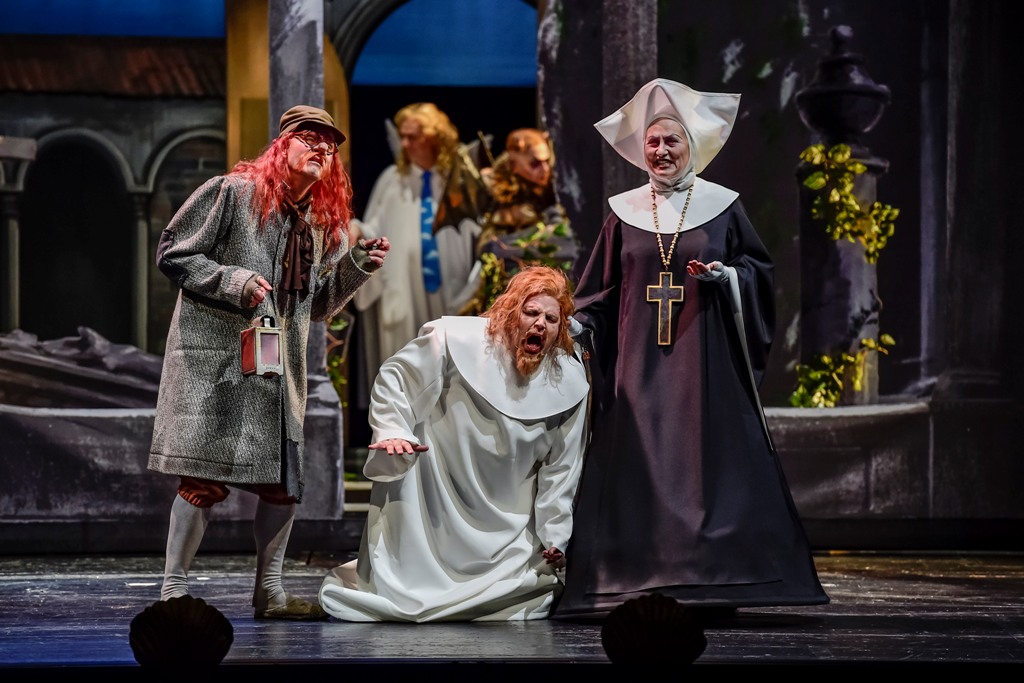 The director has also designed the sets and costumes. Hell is very imaginative, helped by excellent mood lighting (Holger Reinke); the nunnery is fine, but the cadet school has one very awkward narrow entrance up stairs ULC which characters who are not supposed to meet have to use at the same time! Scene Four, the C21 Dancing School, is just drab, and reminds me of a ‘disco’ I had the misfortune to attend in Soviet Russia in the 1970s!

Musically, the show is satisfactory, all the artists named above enjoying the musical numbers more than the dialogue. Unfortunately Dagmar Schellenberger, wasted as the Mother Superior in Scene Two, proves that she no longer has much of a ‘singing’ voice and doesn’t get a real chance to prove herself as the wonderful character actress she is.

Jakob Brenner conducts the stylish orchestra, making us wish that there was more music in the operetta, but even he cannot stop the production from often coming to a total stop between songs, especially in Scene Two.

This is a co-production with Volksoper Wien: one hopes that by the time it reaches the self-declared ‘Capital of Operetta’ a new director and choreographer will have been appointed and that either another new ‘book’ or a return to the original will have occurred.

For more information on the production in Chemnitz, click here.