German regional theatres excel in searching out rarely performed stage works and often breathing new life into them. Le Roi Carotte, a “opéra-bouffe-féerie” with a libretto by a young Victorien Sardou, first saw the light of day in 1872, when it ran for six hours. The ‘Keck’ version seen at Hannover, and previously in 2016 at Lyon, lasts less than half that. 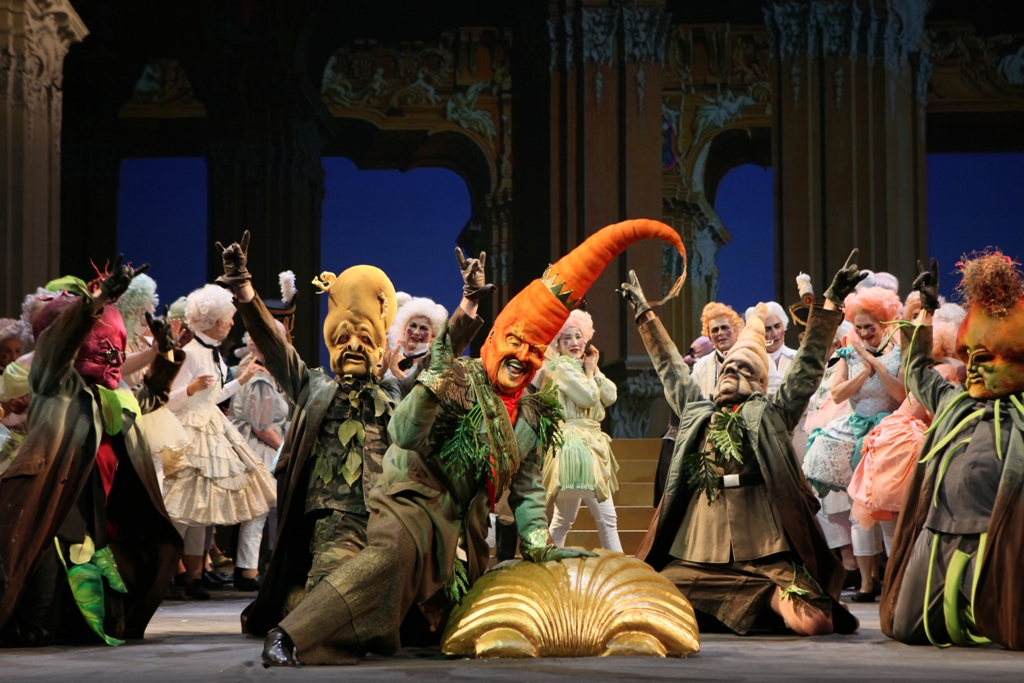 The first production was deemed highly successful even though it lost a lot of money, as did the first (and only?) London production, both being revived owing to their success, the losses occurring because of high running costs.

The plot, based on an E.T.A. Hoffman tale, is a thinly disguised political satire, telling of the penniless (because as a student he has spent all the country’s money on wine and women) Prince Fridolin who sells all his ancestral armour to pay his debts. The suits of armour come to life and, aided by an evil fairy,  the vegetables of the kitchen garden do also , including King Carotte who, assisted by magic, kicks out Fridolin. This production resists the temptation to make King Carotte with his orange hair look like Donald Trump, but Theresa May is certainly evident in his walk! 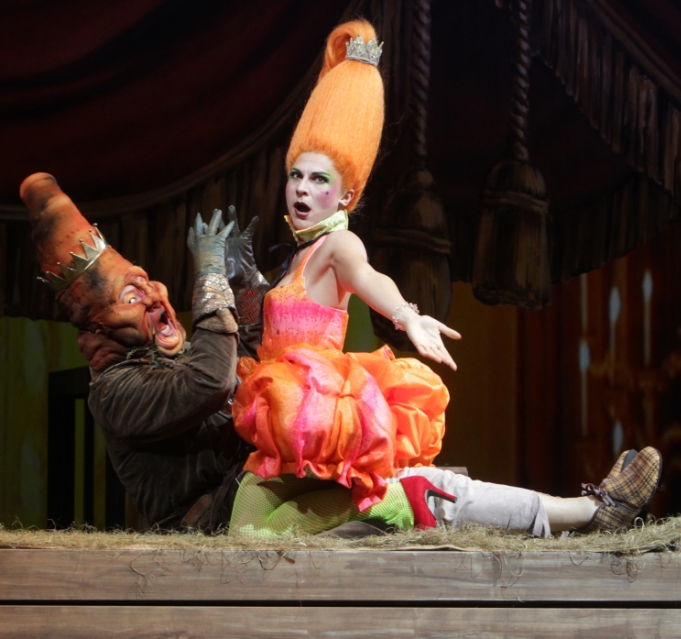 King Carotte proves to be useless and starts withering away. Meanwhile, the magician Quiribibi (Daniel Drewes), who, in a truly hilarious and almost surreal scene( he is very old, to say the least) is dismembered limb by limb, plus his head and torso, until he appears as a boy, talking all the while telling Fridolin to fetch a magic ring hidden in the ruins of Pompei – cue for a very imaginative song about a steam train! – and to get there via Monkey Island and the Kingdom of the Insects – superbly staged.

In the end Fridolin is restored to the throne … (I hope, dear reader, that you understand this very simplified version of the plot.) 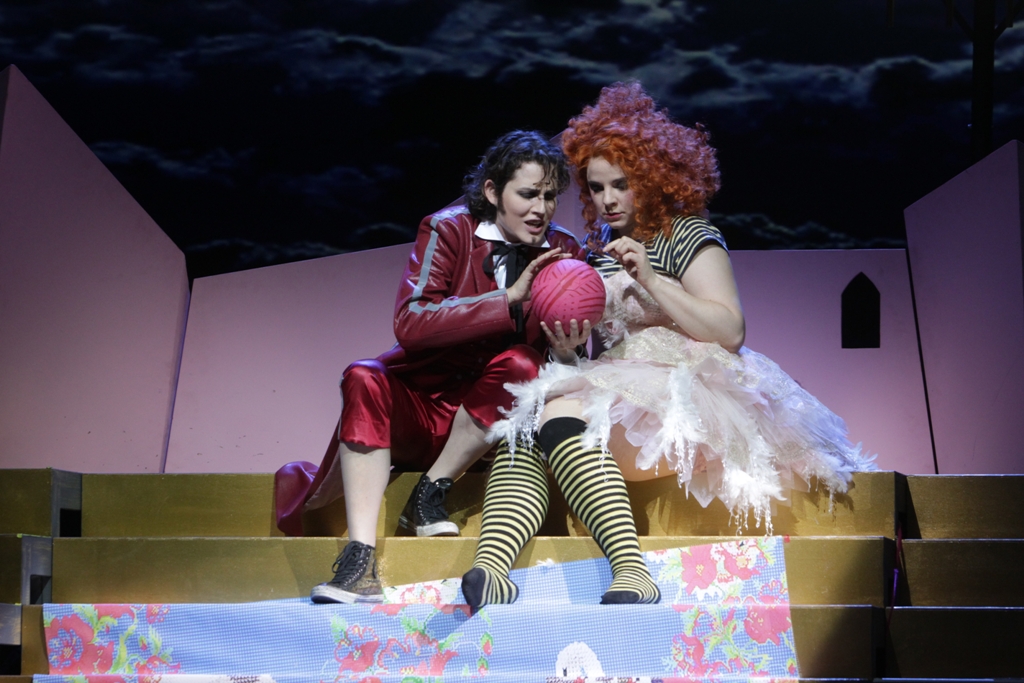 The production at Hannover, soon to be seen at Volksoper Wien, is suitably daft and lavish. Direction is by Matthias Davids whose imaginative ideas are certainly at one both with Sardou’s and with Offenbach’s lunacy. Everything has terrific energy and at times the show is exhausting to watch, very similar to the best of Kosky’s work at Komiche Oper Berlin.

Mention must be made of the rapid growth of the various vegetables whom we see in the garden, the ancestors marching onstage in full suits of armour, the wicked fairy Coloquinte flying in to impose her will and not forgetting the eruption of Mount Vesuvius. All perhaps not quite as spectacular as the original but so inventively managed. 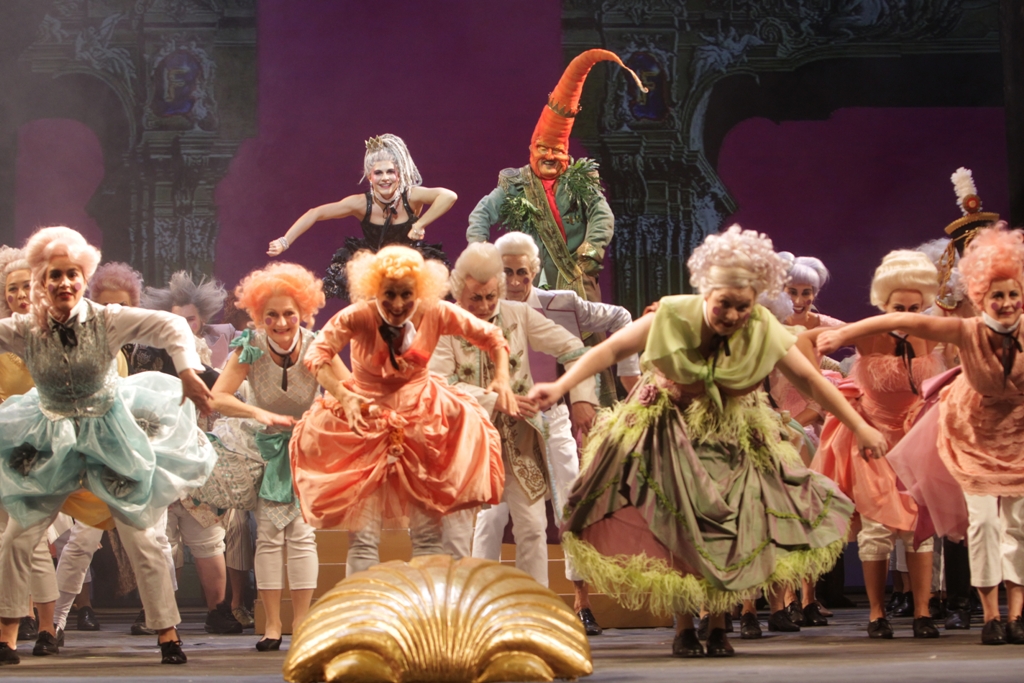 At this point I should mention that the ever changing sets, combining projections with a fluid stage are by Mathias Fischer-Dieskau [corrected 4 June, 2019] and the lavish, imaginative, costumes are designed by Susann Hubrich.

It is impossible in an article of this length to comment on all the eighteen named characters but I will try to discuss those who had the opportunity to make the most impression.

Fridolin (Eric Laporte) looked like Billy Bunter at first, clearly having enjoyed his student days. He had tremendous physical agility as well as energy in both his singing and acting, as indeed did all the cast. Robin, his adviser, a breeches role, was humorously played by Mareike Mort and Rosee, his intended by Yiva Sternberg.

King Carotte himself, in a tremendous orange mask and headpiece was Sung-Keun Park, clearly enjoying himself – one cannot honestly say that he was believable as a carrot, but did he have fun! 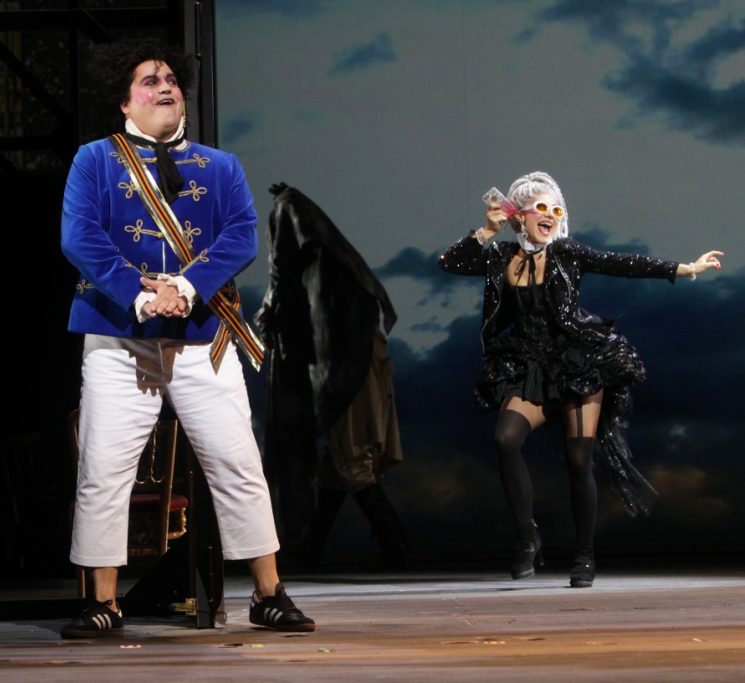 Princess Cunegonde (Anke Briegel), from a neighbouring state, purports to be Carrot’s fiancée, as she has access to pots of money, but in reality is yet another villain (dressed in orange!) who teams up with King Carrot as his wife (I think!)

What needs to be stated is that everyone involved is a singing actor, all being able to handle dialogue as well as what is often quite difficult music and being able to dance: operetta is much more challenging for those on stage than opera!

The orchestra and chorus are willing participants in this extravaganza, ably abetted by Valterri Rauhalammi as the musical director, who makes us believe that he and everyone else has been performing Offenbach all their lives. Musically, although perhaps not quite in Offenbach’s top flight, the show has many strong numbers, especially the extended finales to the acts and the Vesuvius Railway song, which is just so silly. There is never a dull moment in this production and everyone involved appears to be enjoying themselves – and it is the sort of enjoyment which is infectious.

The full house at Hannover clearly loved it, aided by the German surtitles for the songs – and occasionally the dialogue when it was thought by the dramaturg that some witty commentary on the proceedings was necessary!

A wonderful, fun evening was had by all at the Staatsoper: just a shame that it was the final performance – unless of course, you go to Wien Volksoper when it plays there, even if it won’t have the same cast (I assume – if it does it will denude Hannover of most of its ensemble!) I do urge you to see it – if nothing else this production proves that there is more to Offenbach than Orpheus, Belle Hélène etc, good as they are!

The 2016 Lyon production, with the marvellous Christoph Mortagne as King Carrot, has been broadcast on many music stations in Europe. It sounds even more like Offenbach in French, of course, but Jean Abel’s German version is very amusing, for example the ‘Pizza’ chorus near the beginning of Act One with its “Yum, Yum, Yum” refrain.

I am listening to my BBC recording as I write this – Yum, Yum, Yum!