One of the most successful, and certainly the most widely enduring of Kálmán’s operettas, Die Csárdásfürstin was nevertheless composed to a very conventional libretto by Leo Stein and Béla Jenbach detailing the umpteenth operettic romance between an aristocrat and a cabaret singer. The singer is the Hungarian Sylva Varescu (Mizzi Günther), the aristocrat is Edwin Ronald (Karl Bachmann), the son of the Viennese Fürst Leopold Maria von und zu Lippert-Weylersheim (Max Brod). He promises to wed her, and goes through a form of betrothal, but his family announces his engagement to their niece, the Countess Stasi (Susanne Bachrich). Sylva turns up at a ball at Edwin’s home on the arm of Graf Boni Kancsianu (Josef König), who has pretended to be her husband for the occasion, and Edwin makes a public stand, refusing the alliance with Stasi as Sylva reveals herself as no countess but a common cabaret singer. Ultimately Edwin’s father cannot object to his son’s choice, for the ageing good-time aristocrat Feri von Kerekes (Antal Nyárai) recognizes in the venerable Fürst’s wife a chorus girl with whom he had had a fling many years ago. Boni pairs off with Stasi in the all-round happy ending. The operetta premiered at the Johann Strauss-Theater, Vienna, on 17 November 1915. 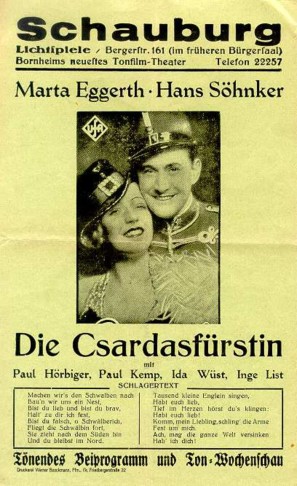 Film advertisement for the movie “Die Csardasfürstin” starring Martha Eggerth and Hans Söhnker, 1930. From the archive of the Deutsches Historisches Museum, Berlin.

Erich Müller’s production of Die Csárdásfürstin was a great wartime hit in Vienna, running through the whole of 1916 and, as Cordy Millowitsch and Irene Fidler succeeded Fräulein Günther in the title-rôle, into 1917, closing in May after a first run of 533 performances. It was kept in the repertoire of the Johann Strauss-Theater for a decade thereafter. In Hungary Csárdáskirálynö (ad Andor Gábor) scored a similarly great hit at the Király Színház, with Emmi Kosáry and Ernö Király as its romantic leads and Ida Szentgyörgi and Márton Rátkai as the second pair, running for nearly 200 performances in its first series, passing the 200th performance on 15 May 1917 and the 300th on 29 January 1918, and being given a major revival at the same house in 1927 (16 April). The show also quickly established itself as the most popular of Kálmán’s works in Germany. 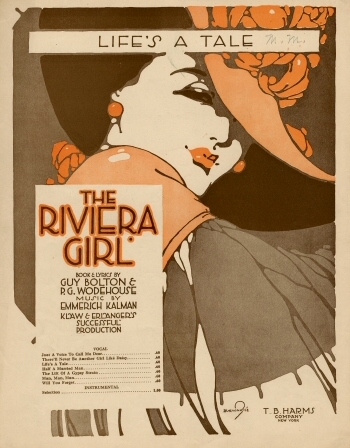 Sheet music cover for “Life’s a Tale” from Kálmán’s “The Rviera Girl.”

The English-language versions of the piece did rather less well. In Klaw and Erlanger’s American production (ad Guy Bolton, P G Wodehouse) the Hungarian vocalist of the original became The Riviera Girl, a vaudeville singer as played by Wilda Bennett, and the show’s score was gratified with the addition of such local lollipops as Juliette Day and Sam Hardy’s un-Hungarian suggestion ‘(Let’s Build a little) Bungalow in Quogue’. The show lasted 78 performances on Broadway. 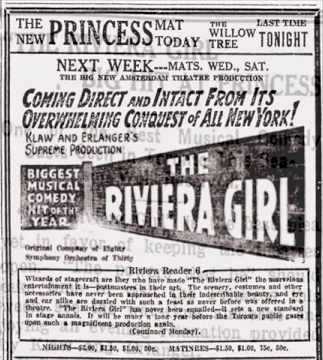 Newspaper ad for Kálmán’s “The Riviera Girl” on Broadway.

London’s less tastelessly tinkered-with version made its heroine, a little less improbably, into The Gipsy Princess (ad Arthur Miller, Arthur Stanley) and producers Claude B Yearsley and Walter de Groot imported a real Hungarian prima donna, Sári Petráss, to play the starring rôle alongside Germany’s M de Jari (Edwin), Phyllis Titmuss (Stasi), Billy Leonard (Boniface), Mark Lester (Feri) and three speciality dancers. They got 204 performances out of runs at the Prince of Wales and the Strand Theatres before the show went into the provinces where it was played rather more and longer than most other shows that had only managed a choppy 200-odd performance life in town. It was seen again, in a brief wartime revival, at the Saville Theatre (14 June 1944) in a scaled-down modern version by Miller, but it was not until 1981, when a new adaptation by Nigel Douglas was played at Sadler’s Wells Theatre (1 August), with Douglas himself playing Feri alongside Marilyn Hill Smith (Sylva) and Tudor Davies (Boni), that London finally got to see a faithful and effeective English Csárdásfürstin.

A late first Australian production appeared in 1936, with Maria Elsner as The Gipsy Princess, London’s Dunstan Hart as Edwin and Charles Heslop and Cecil Kellaway heading the roués in Sydney, and Gladys Moncrieff teaming with Heslop and Don Nicol in Melbourne (Her Majesty’s Theatre 17 October 1936). Like its English counterpart it did only fairly, but the piece was given a fresh showing in the 1980s when the Douglas version of the show – still for some reason insisting that its title-heroine was The Gipsy Princess – was played in the repertoire of the Australian Opera Company. 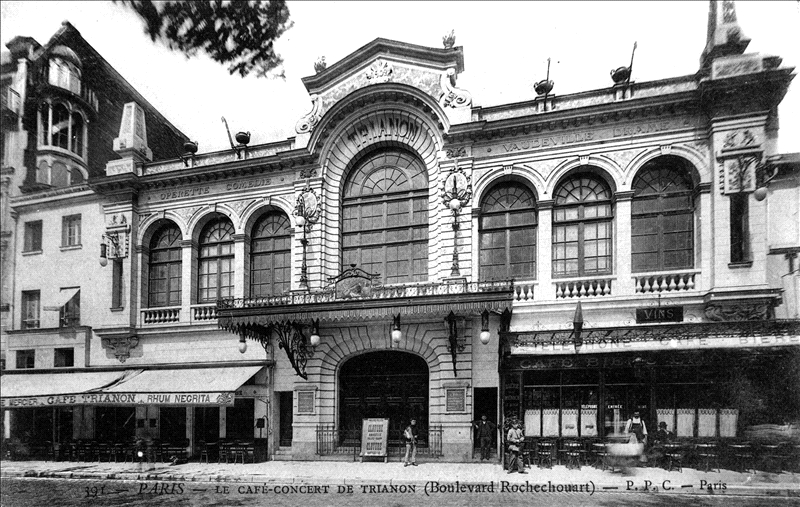 Die Csárdásfürstin was very slow to get to France, and it was not until 1930 that Princesse Czardas (ad André Mauprey, René Peter, Henri Falk) was mounted at the Trianon-Lyrique with Louise Balazy, Léon Marcel, Paul Darnois, Charles Darthez and Reine Prévost featured. The production was successful enough for the show to be restaged the following year at the much larger Gaîté-Lyrique (7 August 1931) with Maya Silva, Gilbert Nabos and Lamy, and the show went on to prove the most popular of all Kálmán’s shows with French audiences. Princesse Czardas was seen again in Paris in 1950, with Marta Eggerth and Jan Kiepura featured in the leading rôles and, in France, as in Austria, Germany and Hungary, it has remained part of the standard repertoire, one of the few Viennese Operetten regularly produced in provincial French houses to the present day.

The jazzed up “Csárdásfürstin” at the Admiralspalast 1930, with Rita Georg and Hans Albers.

A major revival was seen in Berlin, at the Admiralspalast, in 1930, whilst in the post-war years a largely rewritten script was manufactured in Hungary to make a star rôle out of the part of Edwin’s mother as a vehicle for the country’s greatest but now aged operetta star, Hanna Honthy.

In Vienna, the most recent production has been that played at the Volksoper (23 October 1982), in another altered version by Robert Herzl which includes an interpolated Kálmán song, ‘Heute Nacht hab’ ich geträumt von dir’, for the previously songless Edwin. (This tango had been written by Kálmán for the 1930 jazz version in Berlin.) 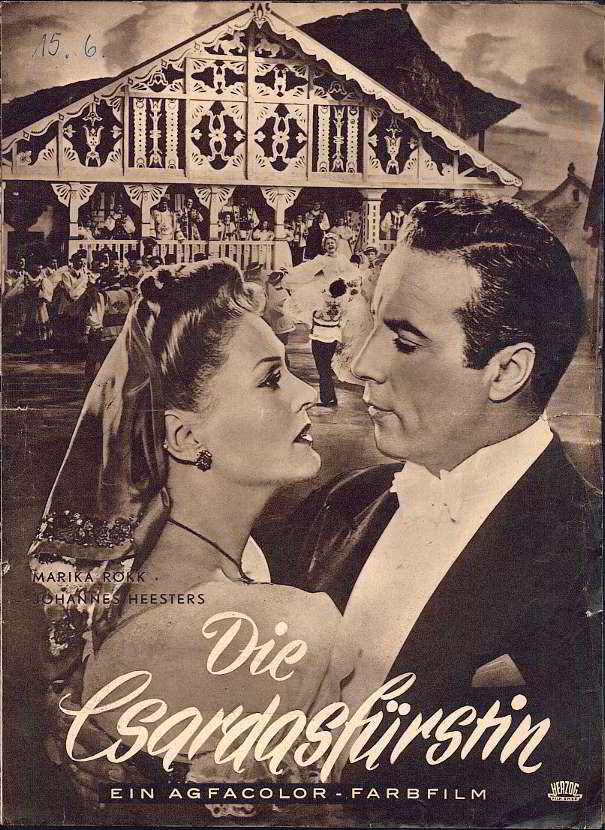 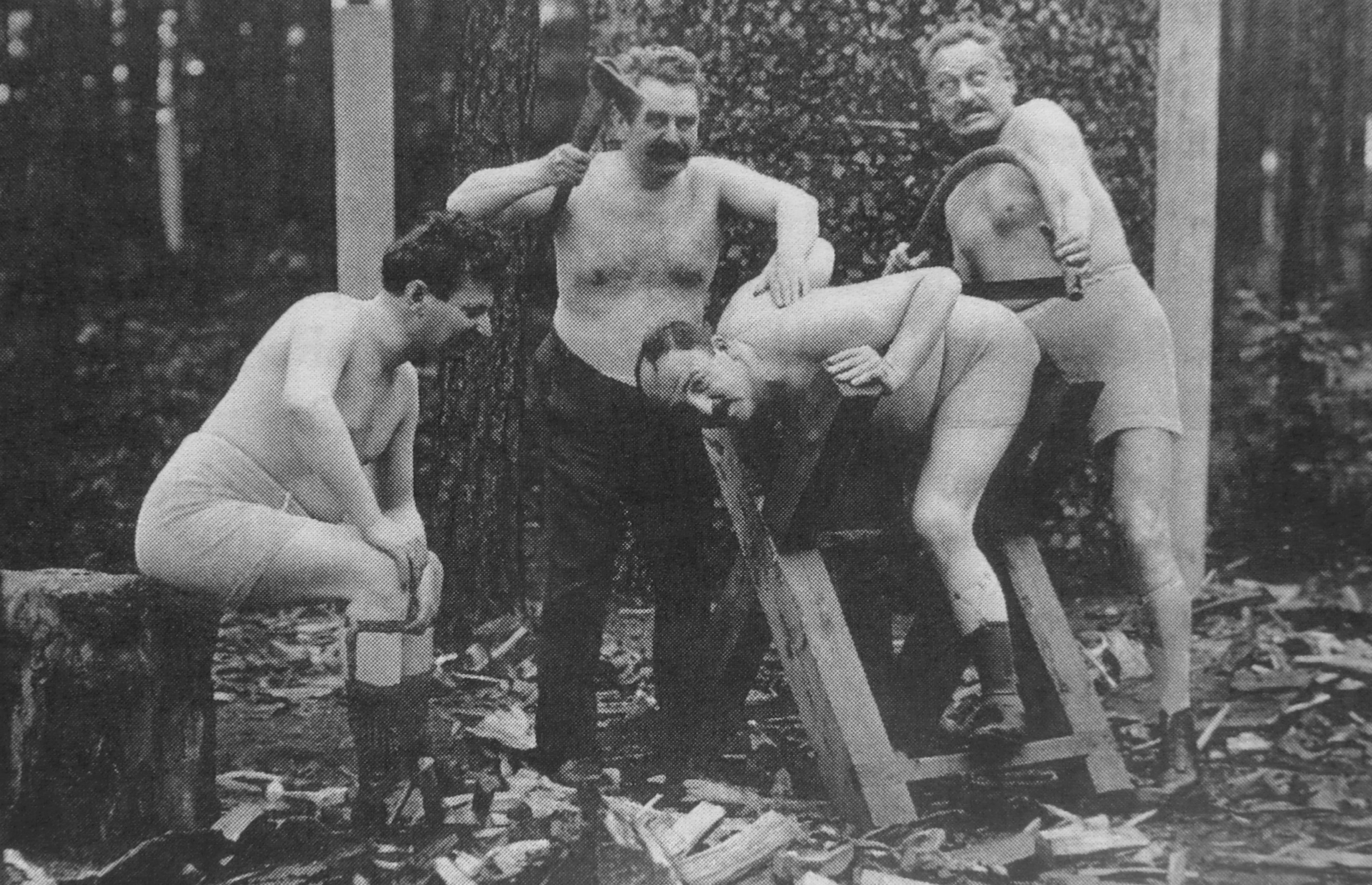 One of the few private photos showing Kálmán from his humerous side that he rarely displayed in public. Here, in 1914, he is horsing around with his “Csárdásfürstin” writing partners Leo Stein, Wilhelm Karczag and Bela Jenbach.