Today I got asked, for the umpteenth time, ‘what was the first American musical?’  Well, all those three qualifications narrow the field. For me, an ‘American’ musical means, at least something original written in America, for America, by folk (if hardly, at the time, American born) at least living there. I’m sure there were loads of attempts to write and stage semi-original and pasticco pieces (and the topic has been well covered, not least by me). But putting archaeology aside, a successful and substantial American musical is something else. Here is my pick: The Doctor of Alcantara. Okay, it was written by an Englishman (Benjamin E Woolf), composed by a German (Julius Eichberg), but in and for America. Boston, more precisely … yes, Boston was the cradle of the American musical there! (Sorry, New York.) The opéra-bouffe in 2 acts premiered at the Boston Museum on 7 April, 1862, before moving on to the Theatre Français in New York where it opened on 28 May, 1866. 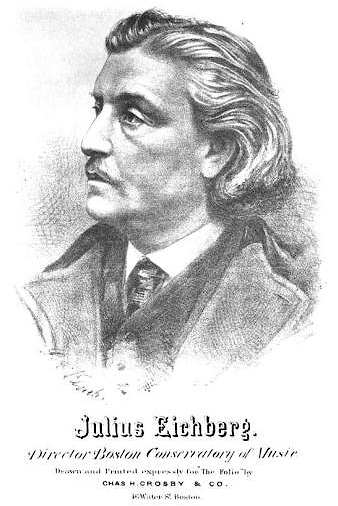 The first American musical play to make a success both in America and abroad, The Doctor of Alcantara, although both derivative and imitative in text and music, is a much more substantial and significant piece than The Black Crook (produced four years later) which used once upon a time to serve as a starting point for histories of America’s musical stage.

A text written by British-born, American-bred Benjamin Woolf, ‘literary man to the Boston Museum’ (and who wrote texts for a long series of musicals, and of plays, staged mostly in Boston) compiled mainly from familiar scenes and situations plucked from British and Continental comic operas, and most notably those of Damiant’s popular French La Guerre ouverte, ou ruse contre ruse, was paired with a score by German-Bostonian Julius Eichberg, musical director at the Boston Museum, the whole making up into an agreeable and much appreciated little light opera.

The plot followed the student, Carlos, in his attempts to woo Isabella, daughter of the Doctor Paracelcus, against the wishes of her vain and ambitious mother. When Carlos, in his attempt to get past his sweetheart’s guardian, is delivered to the house in a basket, it is dumped in the river, when he is offered wine it turns out to be a sleeping draught and the Doctor thinks he has committed murder, but, at the end of everything, the boy turns out to be — of course — the very unknown young man whom Isabella’s parents had earmarked for her.

The dozen items of the first act included a pretty tenor/soprano duo ‘I Love, I Love’, a serenade (‘Wake, lady, wake’) and cavatina for the tenor (Carlos), a ballad (‘The Knight of Alcantara’) and a romance for the soprani, and an arietta (‘When a Lover is Poor’) for the contralto, as well as a basso piece declaring ‘I’m Don Hypolito Lopez Pomposo’ for the Alguazil, whose presence topped up the buffo element of the piece, and some ensemble and choral work. The shorter second act included only a trio, a quartet and a finale. 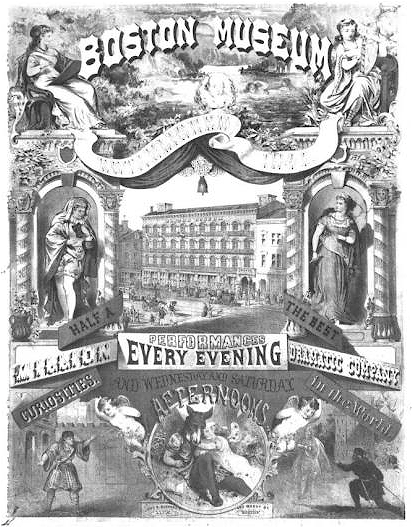 Advertisement for the Boston Museum in the 19th century.

After having been successfully played in its native Boston, with Emily Mestayer in the rôle of Donna Lucretia, The Doctor of Alcantara was toured by the American Parlor Opera Troupe (1863) and it was eventually produced in New York, with Caroline Richings at the head of a cast featuring Edward Seguin, William Castle, S C Campbell and Zelda Harrison.

It proved a great success (‘it draws like a poor man’s plaster’) for several weeks until the management attempted to capitalise on their hit by upping the prices and killed their audience. The season collapsed. A few months later another production claiming to be ‘the genuine version’ and directed by Eichberg himself was mounted at the New York Theater (3 October 1866), Mark Smith (Paracelsus), Maria Norton (Isabella), Maria Gomersal (Inez), William Gomersal (Balthazar) and John Farley (Carlos) featured, and the piece again won appreciative audiences for a fortnight. Indeed, it was reckoned successful enough that the Kelly and Leon Minstrels made it the subject of one of their operatic burlesques.

Eichberg promptly followed up with another of his pieces A Night in Rome (17 October), but back-pedalled to his successful show after just two nights before collapsing in his turn. Caroline Richings’s company toured the piece back to Boston in 1868 and gave fine coverage to Eichberg’s works thereafter. 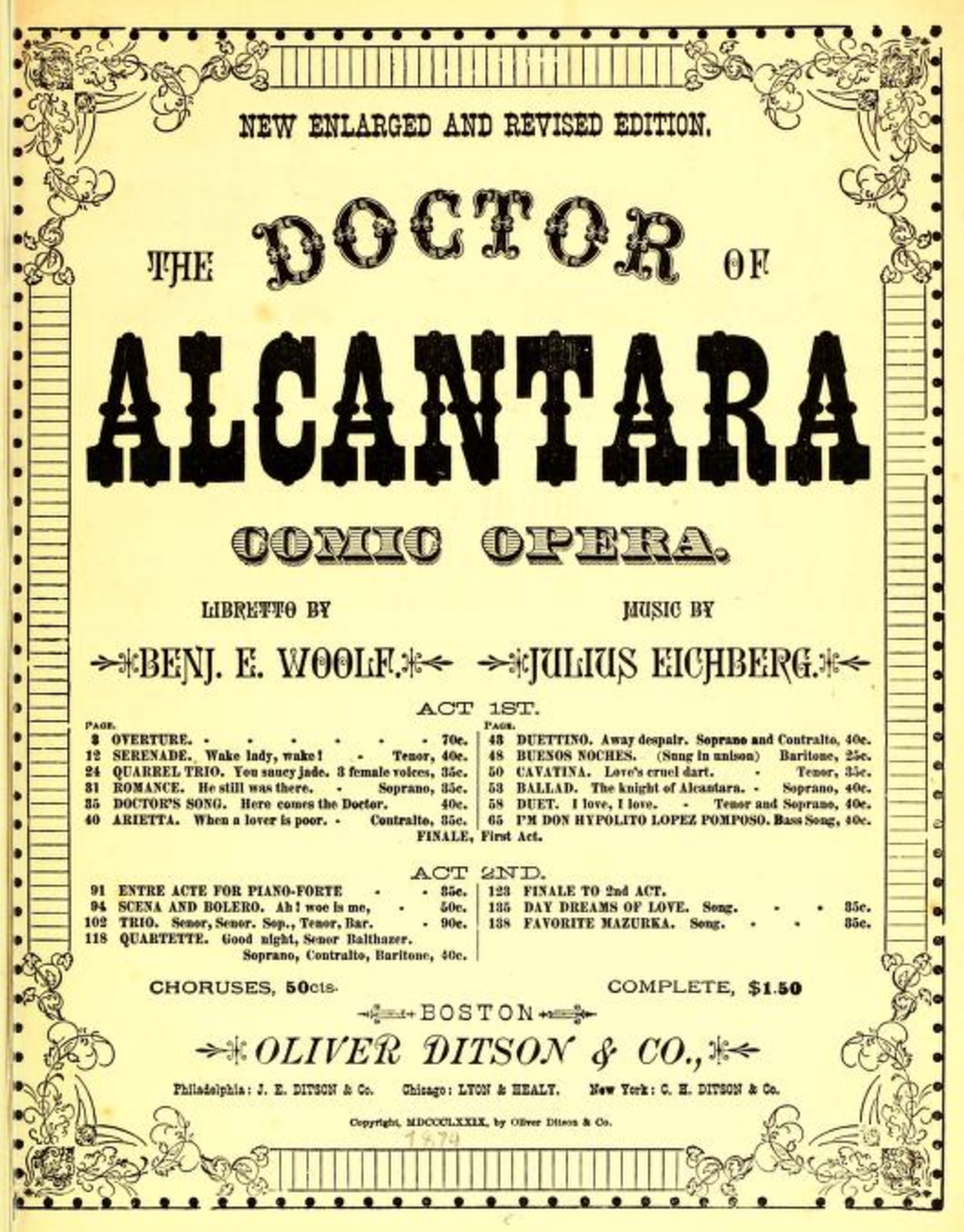 An early edition of “The Doctor of Alcantara.”

The Doctor of Alcantara became a popular item with American operatic companies across the country. It was produced in Washington in 1873 by T Harry Donehue’s ‘The Colored Opera Troupe … the first and only organisation of its kind’, included in the otherwise wholly English and French repertoire of Susie Galton’s company (1873) and of the stalwart Holman troupe from Canada, and it reappeared in New York as late as 1882 when Fred Zimmerman’s company played it as part of their programme at the Metropolitan Alcazar (5 July). It also – thanks to its parti-coloured rôles and undemanding music – became a regular choice with American amateur companies through many, many years. 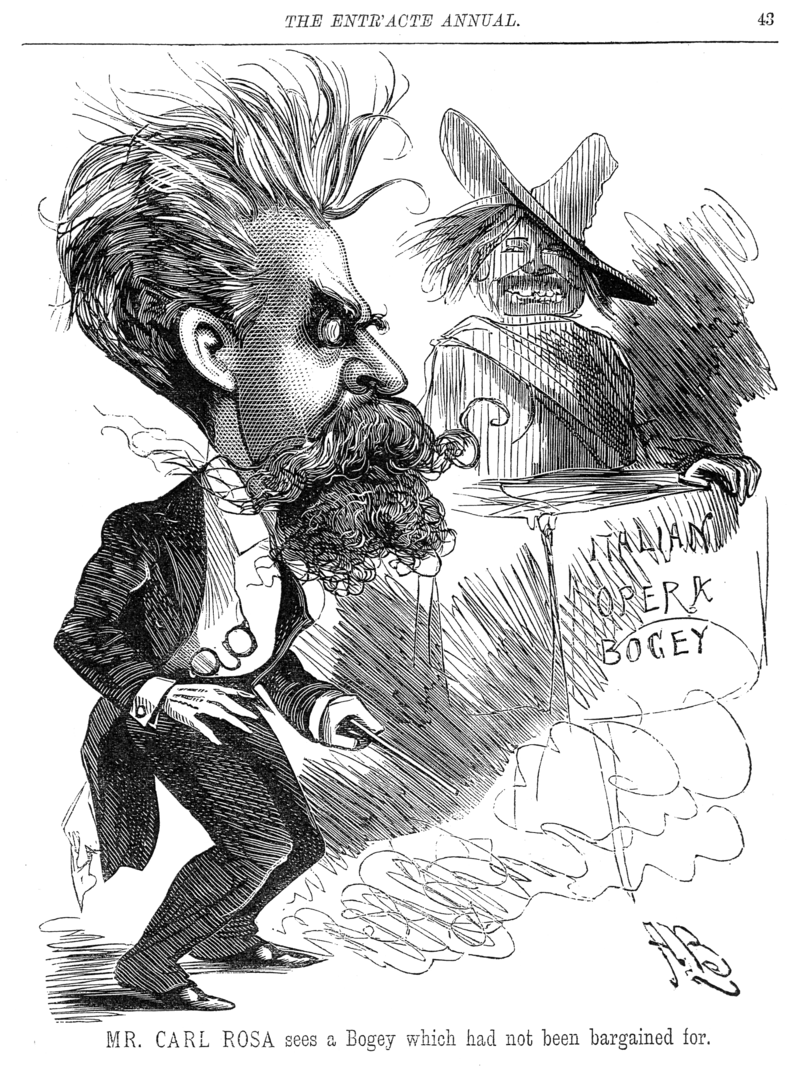 Carl Rosa startled by the bogey of Italian Opera in an 1886 cartoon by Alfred Bryan.

In Britain, the show was taken into the repertoire of the newly fledged Carl Rosa Opera Company, in a version advertised as having been made ‘exceedingly racy and sparkling’ by Andrew B Baildon, and produced with Aynsley Cook, the young Catherine Lewis and Rose Hersee at the head of its cast. Eichberg’s music was judged ‘without pretension and if not quite original at least of a character likely to become popular … the orchestration is somewhat danc-y and Offenbachish…’

The Village Doctor failed to hold a place in the Rosa repertoire, but the piece was later given a London showing at Holborn, under the management of J W Currans, with Blanche Ellerman, W H Woodfield, Lia Rohan, George Bassett and J A Arnold heading the cast. This set of performances gave the comic opera the distinction of being the first American musical to be played in London’s commercial theatre. A few weeks later it won the same distinction in Australia when the Kelly and Leon minstrel company produced their version of The Doctor of Alcantara at their theatre on the corner of Sydney’s King and York Streets. Kelly appeared as Dr Paracelsus, with his son, Edwin Lester, as Balthazar, Leon in travesty as Inez and Emma Wangenheim as Isabel. It was well enough received to be brought back for further performances later in the minstrel company’s season.