Today, the Opera Leipzig will present a new production of West Side Story. Not at the Musikalische Komödie, but in the big splashy house on Augustusplatz, conducted by Intendant and Generalmusikdirektor Ulf Schirmer. That’s the same venue where in 1984 the first (ever) DDR production of this show was seen – with Dagmar Schellenberger as Maria. Yes, the same Miss Schellenberger who is now the reigning operetta queen in Mörbisch. We want to take this opportunity to recall the various German language recordings of West Side Story, made with some of the most famous operetta stars of their day: Ingeborg Hallstein, Julia Migenes and Heinz Hoppe. 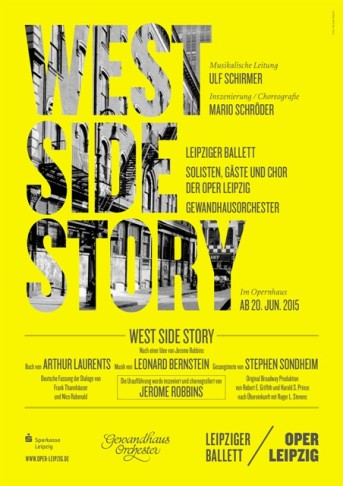 Poster for the 2015 production of “West Side Story” in Leipzig.

American musical theater fans will probably be surprised to hear these recordings exist, since they are not mentioned in any of the standard books such as The Theater Mania Guide to Musical Theater Recordings. (You can be lucky if a British cast album makes its way into there, let alone foreign language recordings … editor Michael Portantiere and his various authors have a very limited world-view.) Kurt Gänzl in The Blackwell Guide to the Musical Theatre on Record is much more open minded, he mentions a Japanese cast recording and Swedish selections in the foreign language department. But that’s it. So let’s turn to Wolfgang Jansen and his Cats & Co.: Geschichte des Musicals im deutschsprachigen Theater. Yes, that’s the book on the history of musicals in German language theaters. There, you find a photo of the 1961 US touring production of West Side Story playing at the Deutsches Theater Munich in the original English version. It was slaughtered by the German press, especially – somewhat amusingly – by Joachim Kaiser in Theater heute. He attested a severe “lack of musical substance.” His verdict: “No operetta could contain more kitsch, no film could be more unrealistic, no advertisement could be more calculated.” Ah yes, German critics and their complicated relationship with popular culture. (It’s the same Mr. Kaiser who later published an enthusiastic book about his friend “Lennie”, dedicated to him “in admiration for this life’s achievement.”) 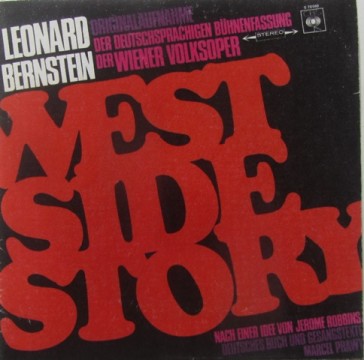 Cover for the CBS LP of “West Side Story” with Julia Migenes and Adolf Dallapozza.

The break-through for West Side Story with German audiences was the film, and a German language stage production at the Volksoper in Vienna in 1968 which Marcel Prawy initiated – after he had (unsuccessfully) brought Wonderful Town to Vienna in 1956, which had followed the very successful Kiss Me, Kate. Prawy talked about the genesis of this production on the radio, which you can hear if you click here. It was a big wollopping hit, also with critics. And there was a full cast album available in German on CBS. That cast included the dazzling young Julia Migenes from New York as Maria and Volksopern house tenor Adolf Dallapozza from Tirol as Tony. (You’ll remember him from his many operetta recordings for EMI.) The album was conducted with a real sense of style and drama by Lawrence Leonard, the translation used is by Marcel Prawy. It’s actually surprisingly good, most of the time. Some lines are questionable. For example: Maria in “I Feel Pretty” is turned into an operetta ingénue of the “Süßes Mädl” type, singing “Weil ich nett bin, einfach nett bin, und adrett bin und süß und gescheit, tun die Mädchen, die nicht ich sind, heute sehr mir leid!” Elsewhere, there are little “gems” such as: “Heut’ Nacht stehen alle Jets bereit zum Fight. [...]  Die Kokos-Fresser heulen: Zweikampf. Doch wenn sie uns erkeilen, dann sind wir bereit. [...]  Ja, es wird toll heute Nacht, ja das wird toll und hebt die Moral. Der Chuck wird fertig gemacht, er braucht beim ersten Hieb ein Bett im Spital.”

If you can get hold of that album, you’ll be amazed by how radiant (and edgy) Migenes sounds a Maria. You understand immediately why she became one of the greatest stars at the Volksoper and went onwards to a big opera career. The orchestration is the familiar one from the Broadway cast album, with slightly different accents in the playing of the Volksopern orchestra. But, in all aspects, this Vienna version is a worthy alternative to the classic American albums. With the possible exception of Dallapozza. He was a dashing young Austrian youth at the time, but often he is as wooden as operetta tenors can come. At times he sings Tony with the same stiffness he brought to Offenbach’s Orpheus in der Unterwelt. While it creates some sort of funny effect there, it doesn’t work too well here.

At other times, however, he can be truly overwhelming. His “Maria” has great impetus and Dallapozza grabs his opportunities to let the voice soar.

It remains a very studied interpretation (“Wer weiß? Kurios? Oh, etwas fliegt auf mich zu, ich greif hin, weg im nu. Was ist es bloß?”), compared to Migenes who is much more of a natural in this kind of music. But he’s interesting post-war casting for Austria. Arline Woods is a husky Antia with a strong accent, but that works well in the context of this recording – because Maria has an equally strong accent. 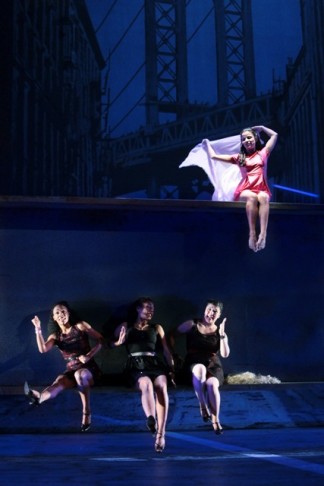 If this West Side Story in German marks a hight point, matters take a turn for the worse with two highlight albums – recorded in East and West Germany respectively. East Germany did not get the license to perform West Side Story because they could not afford to pay the royalties in “hard currency.” That did not prevent them from issuing an album in 1969 with a mix of Kiss Me, Kate, Oklahoma, Annie Get Your Gun and West Side Story. Two shows on each side of an LP. It was called a “Melodienfolge”. The lyrics were translated by Walter Brandin and Max Colpet, the orchestration is re-arranged by Gerhard Kneifel. If you know the instrumental horrors of the DDR Hello Dolly (with Gisela May) you are somewhat prepared for the horrors of hearing Mr. Kneitel conduct “America,” “To-night” [sic], “Cool,” “Maria,” “Something’s Coming,” and “Mein Herz schlägt nur für dich” with Peter Wieland and Rec Demont alternating as Tony and Maria Alexander as Maria. Add to this the Michaelis Chor for “Ach, lieber Sergant Krupke” and you have 15 minutes of pure musical theater terror on VEB Deutsche Schallplatten Berlin.

You can sometimes find this LP on flee markets in Germany. 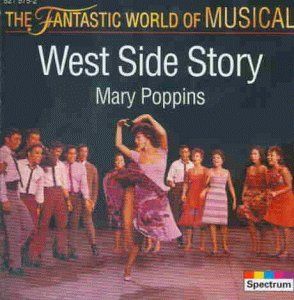 CD cover for the Ingeborg Hallstein recording of “West Side Story” and “Mary Poppins.”

Just in case you thought it couldn’t get worse, wait. There is Ingeborg Hallstein as Maria on a recording using the same Colpet/Brandin translation, but new orchestral arrangements by Paul Biste, played by the Großes Unterhaltungsorchester directed by Heinz Geese in 1967. Twelve tracks issued originally by Deutsche Grammophon (!), partly in German, partly in English. Sometimes both in one song (such as “Tonight”). Hallstein inserts her trade-mark coloraturas everywhere, especially in “Ich gefall‘ mir” (I feel pretty). When she starts chirping “Als ich dich sah” (Only you) with Heinz Hopp you feel reminded of the cheesiest operetta moments of the era – performances that many, until today, consider “classics.” Again you get a children’s choir singing the Jet music, plus the chorus lines of “I Feel Pretty”, which sounds very bizarre. And Peter Rubin singing “Maria” is beyond bizarre. It’s downright embarrassing, with close-harmony male chorus bits thrown in. But you really need to hear the “Promenade” music played like a carousel waltz with heavy brass, and the lines “Für Arbeit gibt es Neger, ich bin dagegen immun” (in “Hallo, Sergeant Krupke” with Wolfgang Kieling and Wolfgang Anheisser) to wonder: what were they thinking of? (Probably not too much, just like with the operetta recordings of that time.)

It wasn’t until 1984 that East Germany got permission to stage their first West Side Story, and play it for two years only. Leipzig was the chosen XXL-venue for it, Stephan Spiewok played Tony to Schellenberger’s Maria. She had just started on her career and moved onwards to Berlin’s Komische Oper and the great things she became famous for since, at the Met, La Scala etc. In an interview with ORCA Schellenberger recalled that the Gewandhaus Orchester Leipzig was so thrilled to be playing Bernstein that they were at the edge of their seats from the first rehearsal onwards. The music practically exploded, as did the audience in its reaction. No one used microphones in 1984, neither the singers nor the orchestra, the music was sung in German. Remember that most East-Germans at the time only learned Russian in school, no English as a second language. The thrill was so great, that people at the opera in Leipzig still talk about this production with a glow in their eyes.

If you put Bernstein’s West Side Story next to East German musical comedy and operetta scores by Gerd Natschinski (Mein Freund Bunbury) or Guido Masanetz (In Frisco ist der Teufel los), you understand why this music made such an impact. The performances in Leipzig were a “hot ticket” in Socialist Germany, and always sold out. The cast took the production on tour through various East German theaters before the two year lease was up, and West Side Story disappeared again, leaving few traces: execept this photo showing a radiant young Schellenberger in the wedding scene and a typical “Socialist” stripped-down staging. 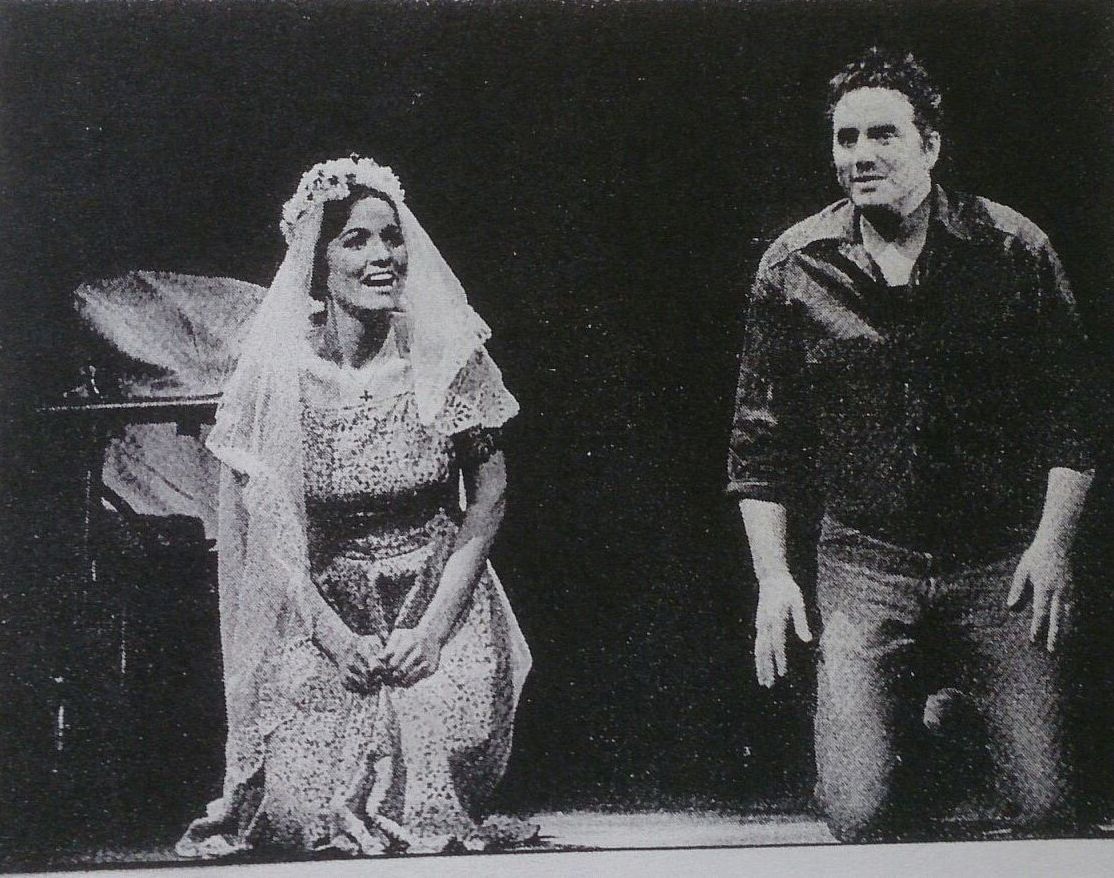 No recording was made in Leipzig back in 1984 because they had no license to do that. Remember: Bernstein himself made a recording with Kiri te Kanawa and José Carreras in 1985, for Deutsche Grammophon. (Yes, the same DG that had released the Hallstein recording.) Schellenberger suggests there might be an in-house recording at the opera in Leipzig, but probably of terrible technical quality. She mentioned that the cast members sang the music on various radio programs, but those were not saved either, it seems.

It remains to be seen whether this new production in Leipzig under Ulf Schirmer will be as explosive as the first DDR performance. There has not been a German language recording since. 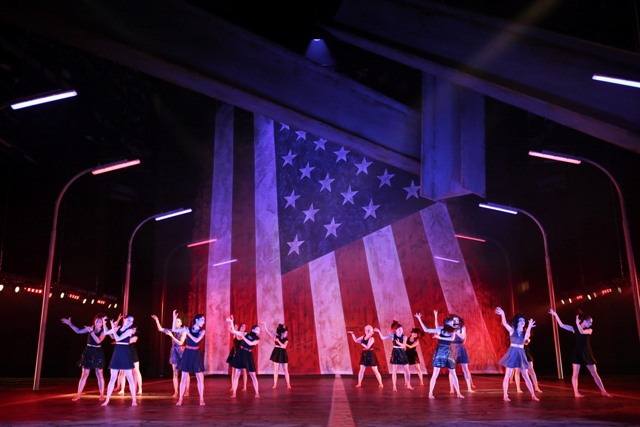 The new production will use English lyrics – as did the Komische Oper in their Barrie Kosky staging –, the dialogue is translated by Frank Thannhäuser and Nico Rabenald. (All singers are miked this time round, as is the orchestra.) So chances are slim that this will lead to some sort of a new German language recording with full symphony orchestra. But maybe it will become an English language recording that might even catch the attention of Michael Portantiere or Steven Suskin on Playbill.com? There are certainly some interesting cast members, among them Myrthes Monteiro as Maria and the young Rupert Markthaler as Bernardo (remember him from his UdK days in Berlin?) The production is directed by ballet director Mario Schröder who brings his full company into this staging. And, yes, the Gewandhaus Orchester are there too, full gale force, to give Bernstein’s classic score their one and all.

You can see a clip from the Leipzig stage rehearsals from a local TV program here. 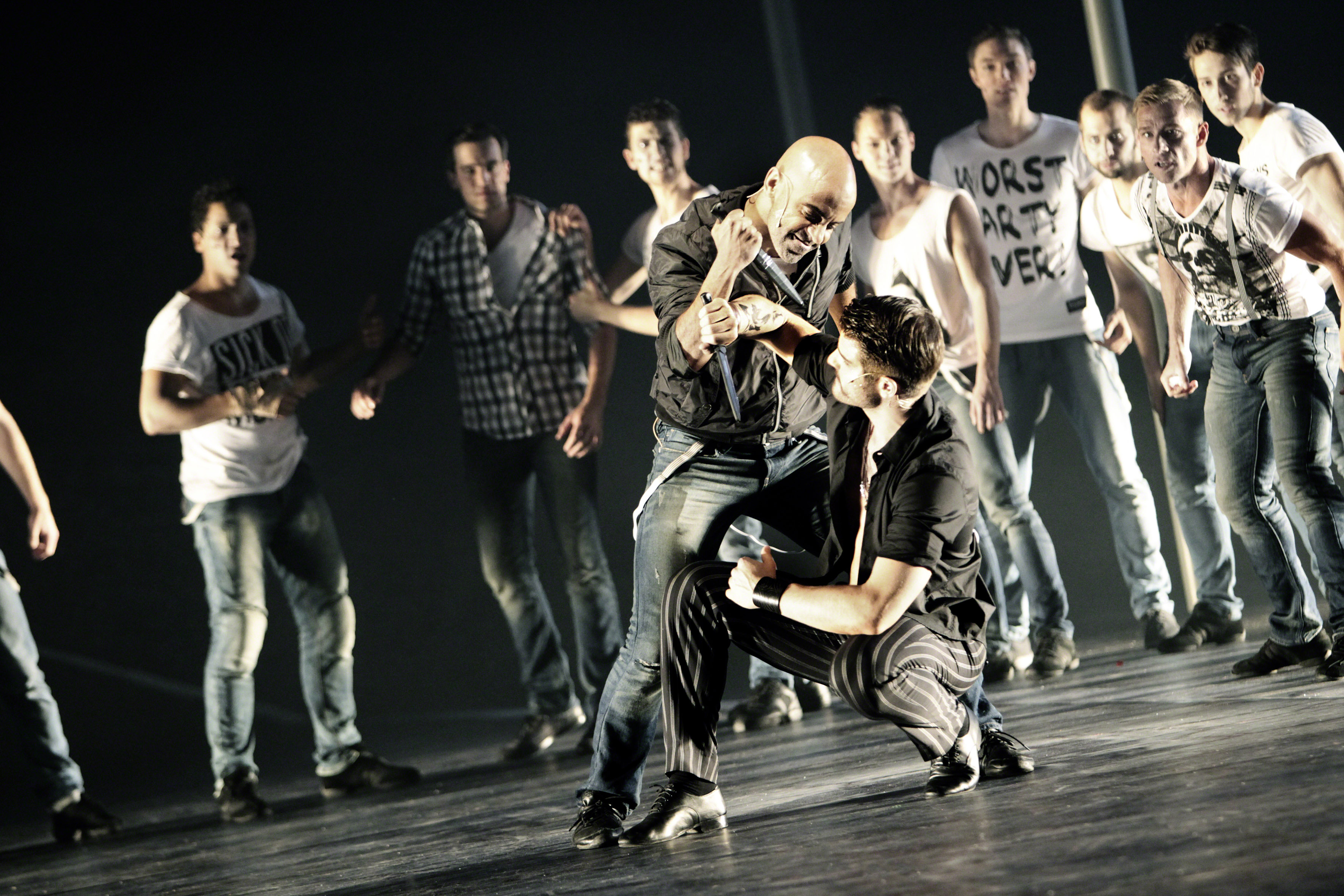