The ‘comic opera’ Patience (or ‘Bunthorne’s Bride’) has an important place in theatrical history. It was the first stage production ever to be lit entirely by electricity when it transferred to Richard  D’Oyly Carte’s specially built Savoy Theatre from the Opera Comique in 1882. It was also the first ever representation of a more or less clearly gay character on stage; Vincent Lankewish writes that Patience is “an early moment in the long process of the homosexual emerging from the closet of representation.” Since 1882, Patience has been infrequently revived, presumably because directors fear that audiences will fail to understand the parody of Oscar Wilde’s and Whistler’s Aestheticism as portrayed in this show. 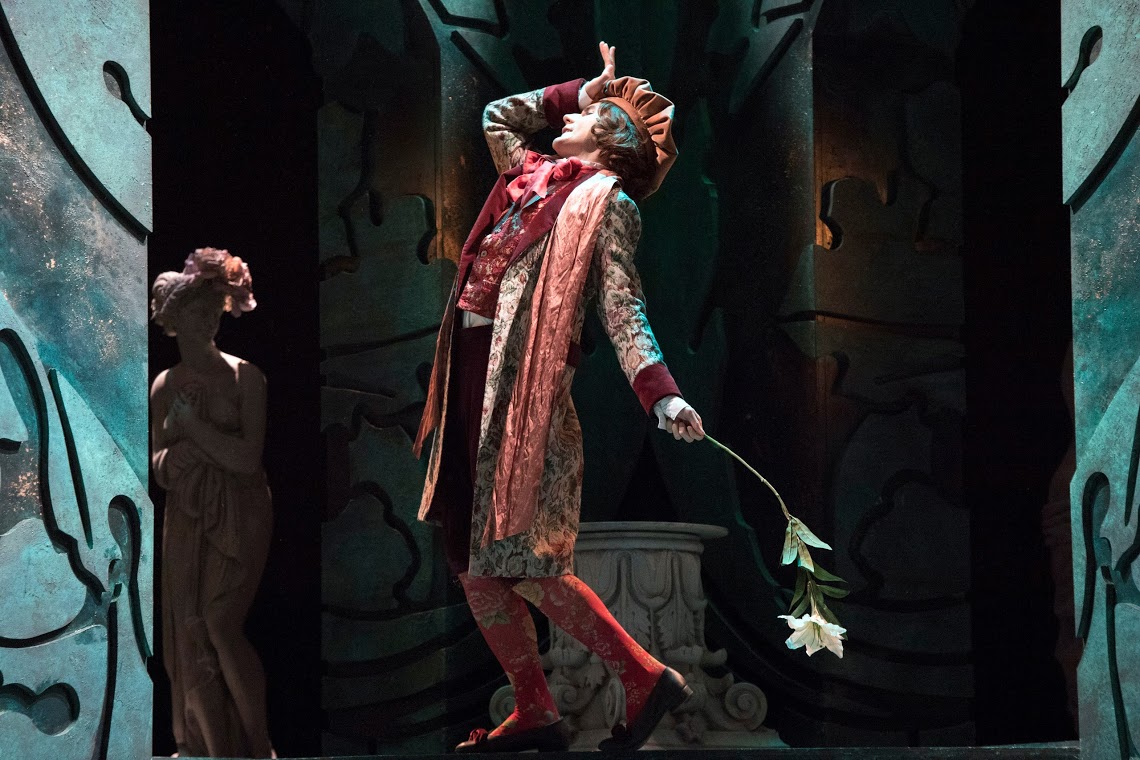 Certainly, to judge by the enthusiastic reaction of English Touring Opera’s audience, this was certainly not the case at Hackney as the theatre overflowed with continual laughter, both during the dialogue and music.

The undoubted success of this new production is due in no small measure to the imaginative direction of Liam Steel.

Very wisely, he decided not to update the production but to set it in a beautiful William Morris style dark green set (Florence de Mare) with plenty of entrances and different levels, often atmospherically  back lit (Mark Howland) in orange. The production is quite ‘traditional’, meaning that Liam allows the piece to speak for itself, which it does, often with hilarity. 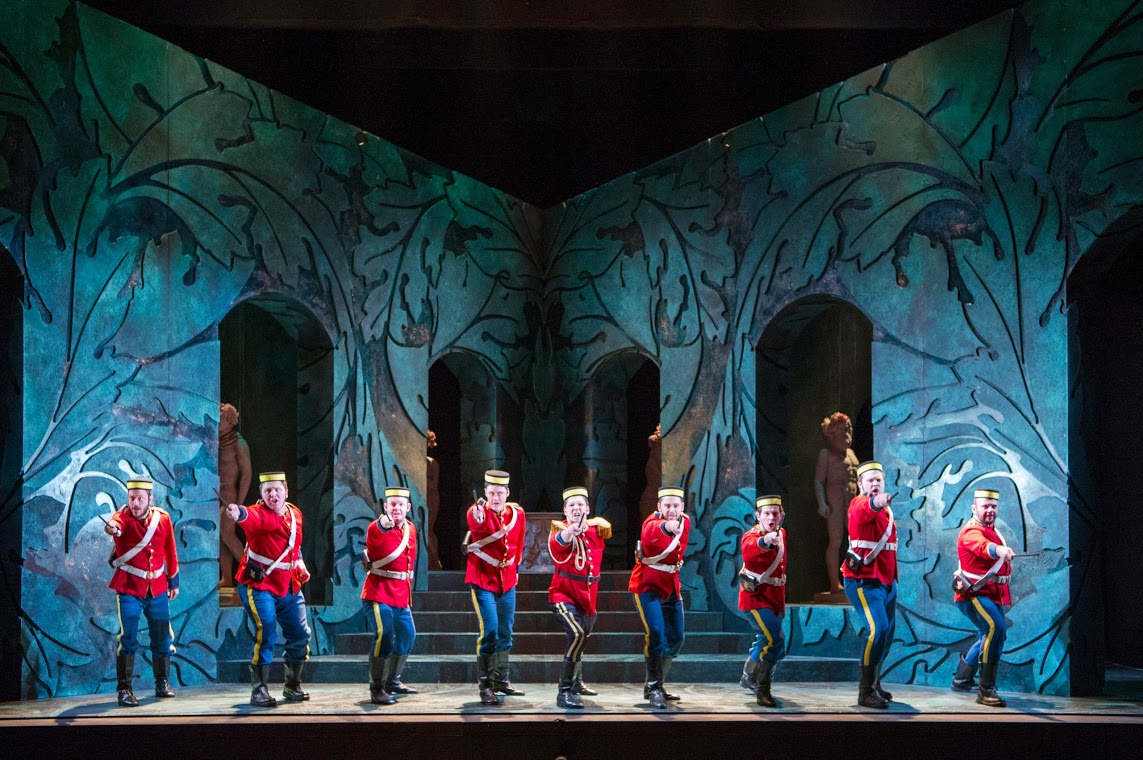 The dialogue is stylishly directed, Gilbert’s lines proving just as witty as Wilde’s, and the musical numbers barely needing the surtitles, the diction is so good. The contrast in staging between the Lovesick Maidens and Dragoon Guards is well managed, the director allowing the show to relax during the former, but to have terrific pace and energy during the latter, especially in the finale to Act One.

Costumes (also Florence de Mare) are lavish: drooping Pre-Raphaelite gowns for the ladies, bright, smart uniforms for the dragoons and sumptuous velvet for Bunthorne and Grosvenor. 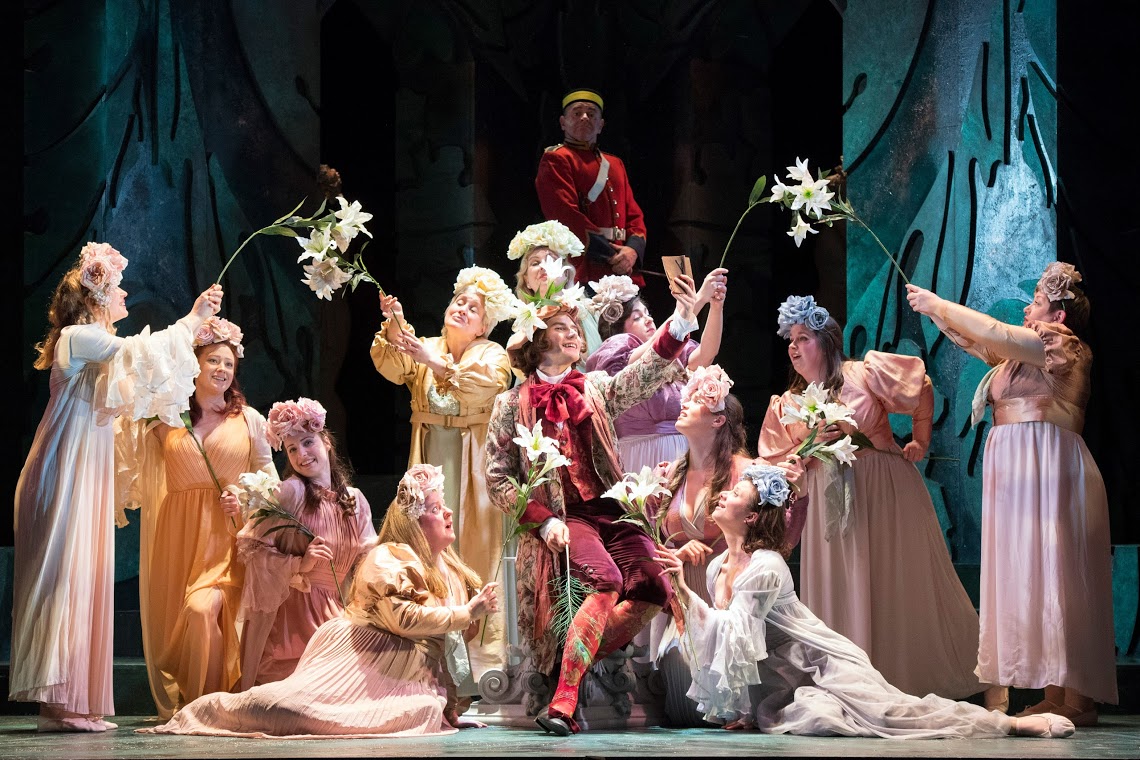 Lauren Zolezzi  is Patience – whether it is not being very bright or carrying a real milk churn around the stage, she is the embodiment of the role. She looks the right age, perfectly innocent, and sings divinely. 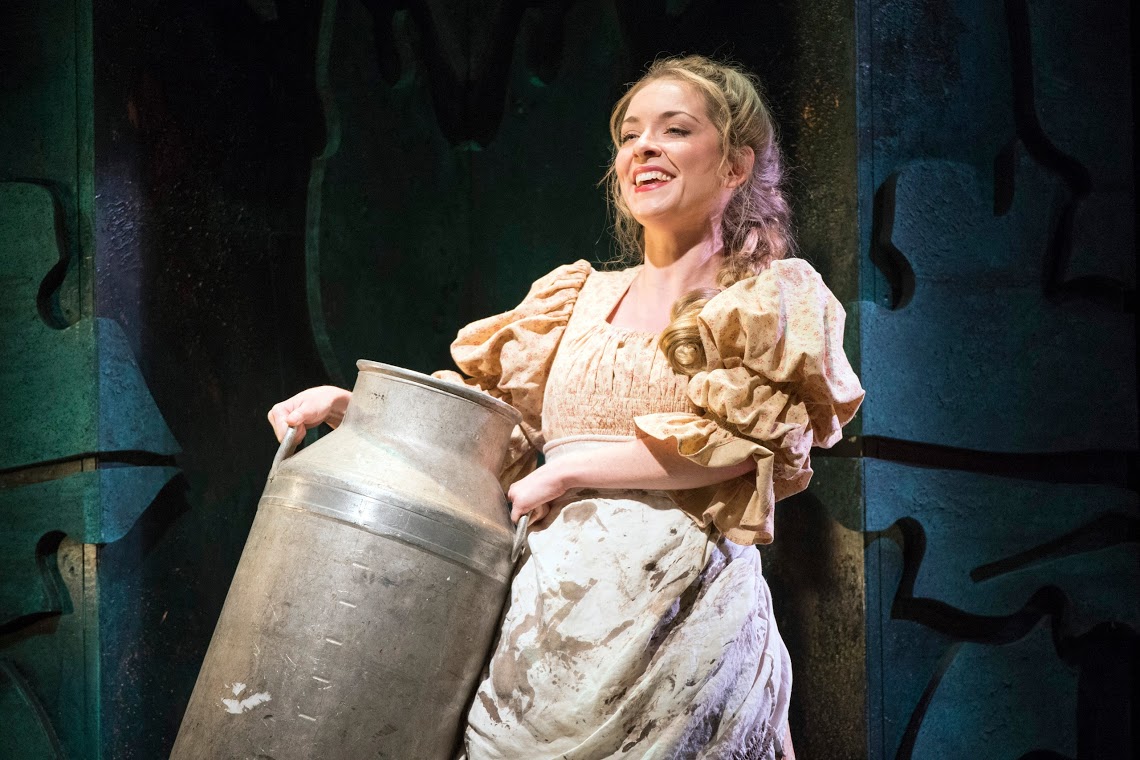 Andrew Slater as Colonel Calverly, copes with his two patter songs with ease and Aled Hall as an ageing Duke of Dunstable, has just that ‘Bertie Wooster’ look of much more money than sense!

Bradley Travis is the epitome of Bunthorne, being so wet, one feels one could put him through a mangle and wring him out: Grosvenor, or ‘Archibald the Allright’ is a delightful contrast in the more than capable hands of Ross Ramgobin. 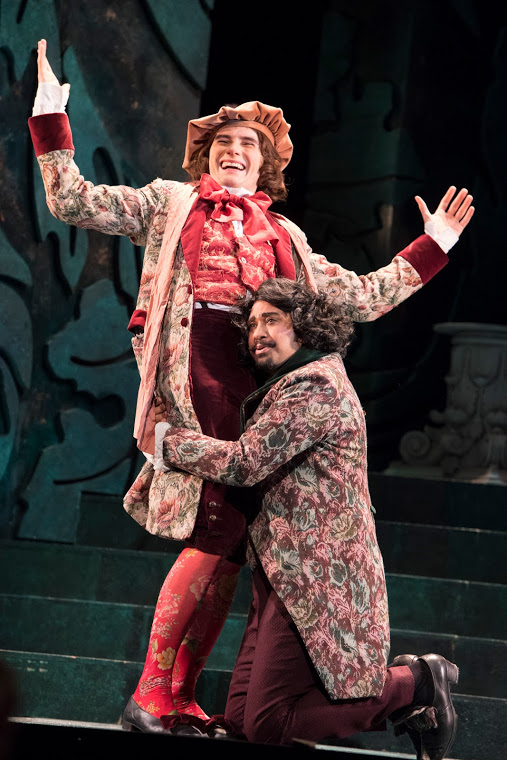 Bradley Travis as Bunthorne and Ross Ramgobin as Grosvenor in their bonding scene in “Patience.” (Photo: Richard Hubert Smith)

Gilbert’s very unpolitically correct Lady Jane, the ageing contralto who is desperate for Bunthorne’s love (body?), is hilariously played by Valerie Reid, who relishes every opportunity she is given – especially at the beginning of Act Two, where her solo about getting stouter as one gets older is one of the many highlights of this production. 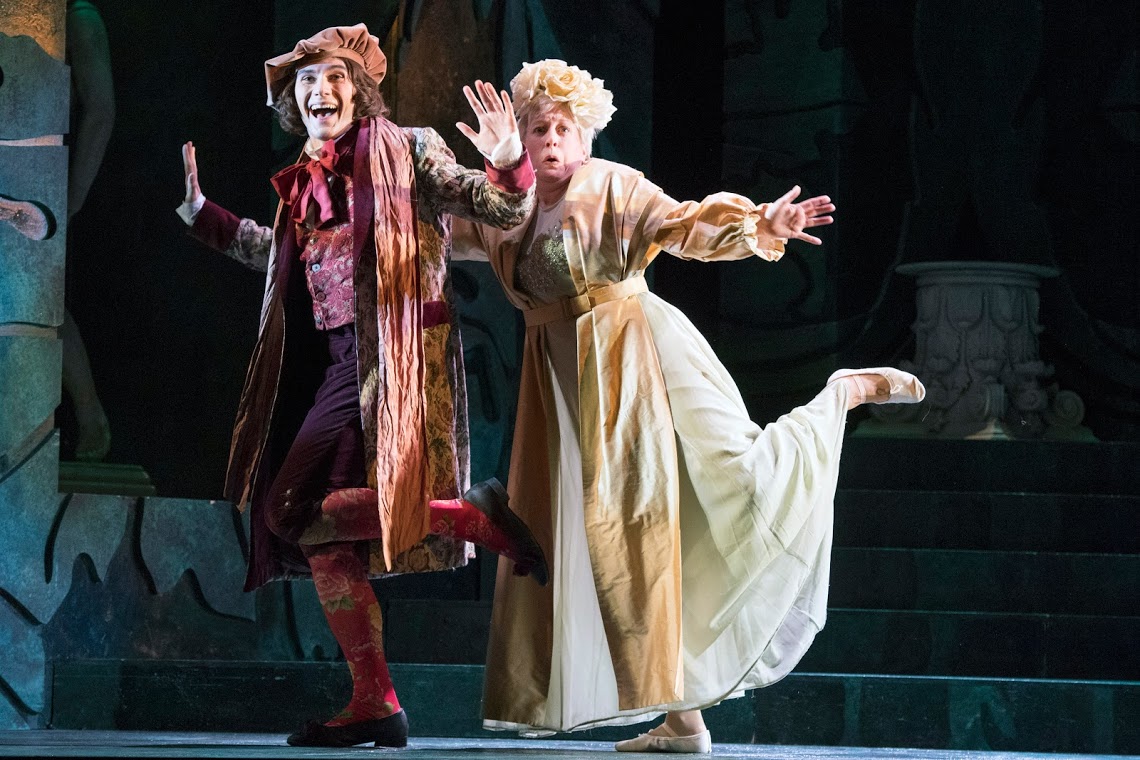 It is a shame that, as yet, Suzanne Fischer, in the secondary role of Lady Saphir, does not as yet have the necessary projection for her dialogue in a large theatre.

Patience is one of Sullivan’s best scores, brimming with pastiche, catchy melodies and wonderful orchestration, especially when one considers that, apart from strings, he only uses six woodwind and five brass players. Timothy Burke, the musical director, clearly loves this music, as does the superb orchestra, who play it as if they were totally immersed in the style required, giving it life and a springiness which one would not have thought possible for a band that had only rehearsed it for a few days. 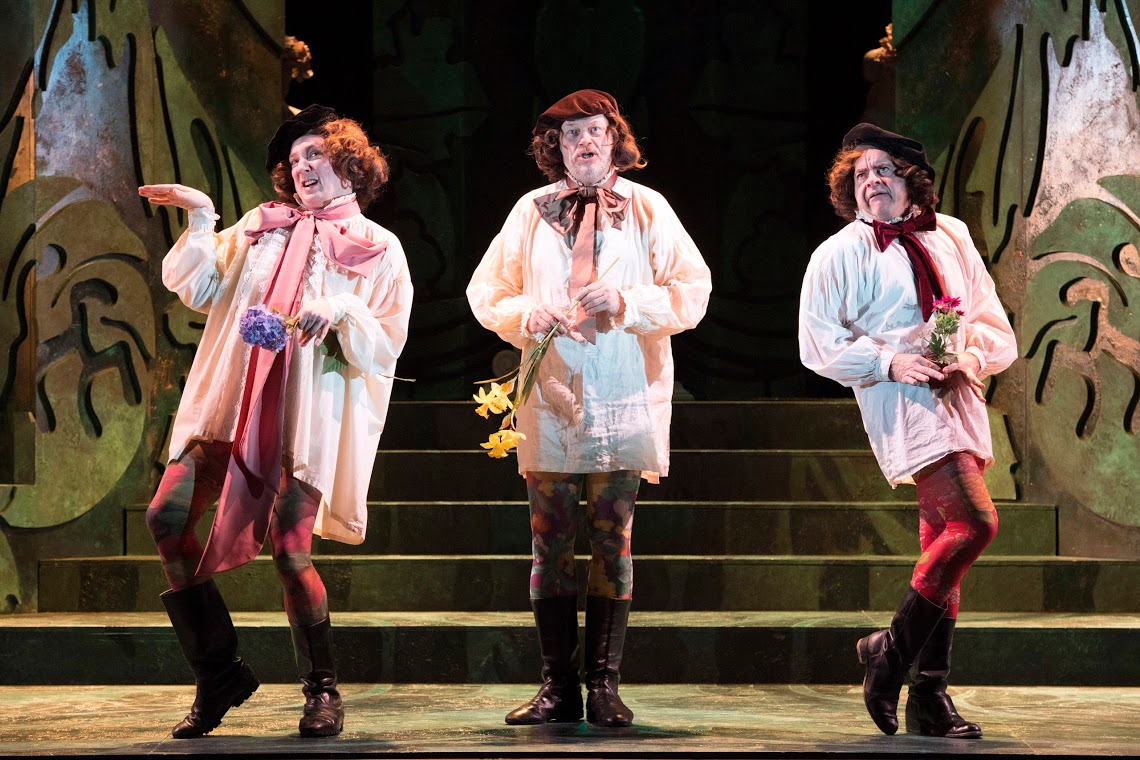 The heterosexual military men trying to win back their “aethetic” brides by acting like poetic homosexuals. (Photo: Richard Hubert Smith)

English Touring Opera is the only opera company that tours full-scale productions, often over 100 performances per year, to theatres all over England (plus Perth in Scotland). It was formed by the Arts Council in 1979, and is known for the breadth of its repertoire, rare Donizetti and Baroque opera being a cornerstone of its repertoire. It receives much less funding than other more prestigious companies, and prefers to spend what money it has on opera, rather than administration! (It has only 12 full-time!). The company also commissions operas for educational and outreach work, especially for disabled and disadvantaged young people, and has deservedly received awards for this. Patience is the first operetta it has staged – please may we have more!

You will have gathered that I thoroughly enjoyed “Patience.”

As Gilbert would have said, it is ‘all but perfection’. However, don’t just read what I have written, go and see it for yourself as it is now touring until June.

As far as recordings go, the only complete one (that is with dialogue) is the 1961 Decca recording by the D’Oyly Carte Opera Company of the time. Luckily, it is also by far the best, featuring such stalwarts of the company as Donald Adams, Philip Potter, Kenneth Sandford, Gillian Knight and Mary Sansom as a very West-country Patience. The conductor is Isidore Godfrey who, like Timothy Burke, knew how Sullivan should ‘go’!