After a very (very!) long wait, Barrie Kosky’s vision of Offenbach’s Orphée aux enfers has finally arrived at Berlin’s Komische Oper, a take-over from the Salzburg Festival. With a brand-new cast, still singing in French. But with the same genitals-swinging dancers. And with Max Hopp as the one-voice-fits-all narrator as the central attraction. 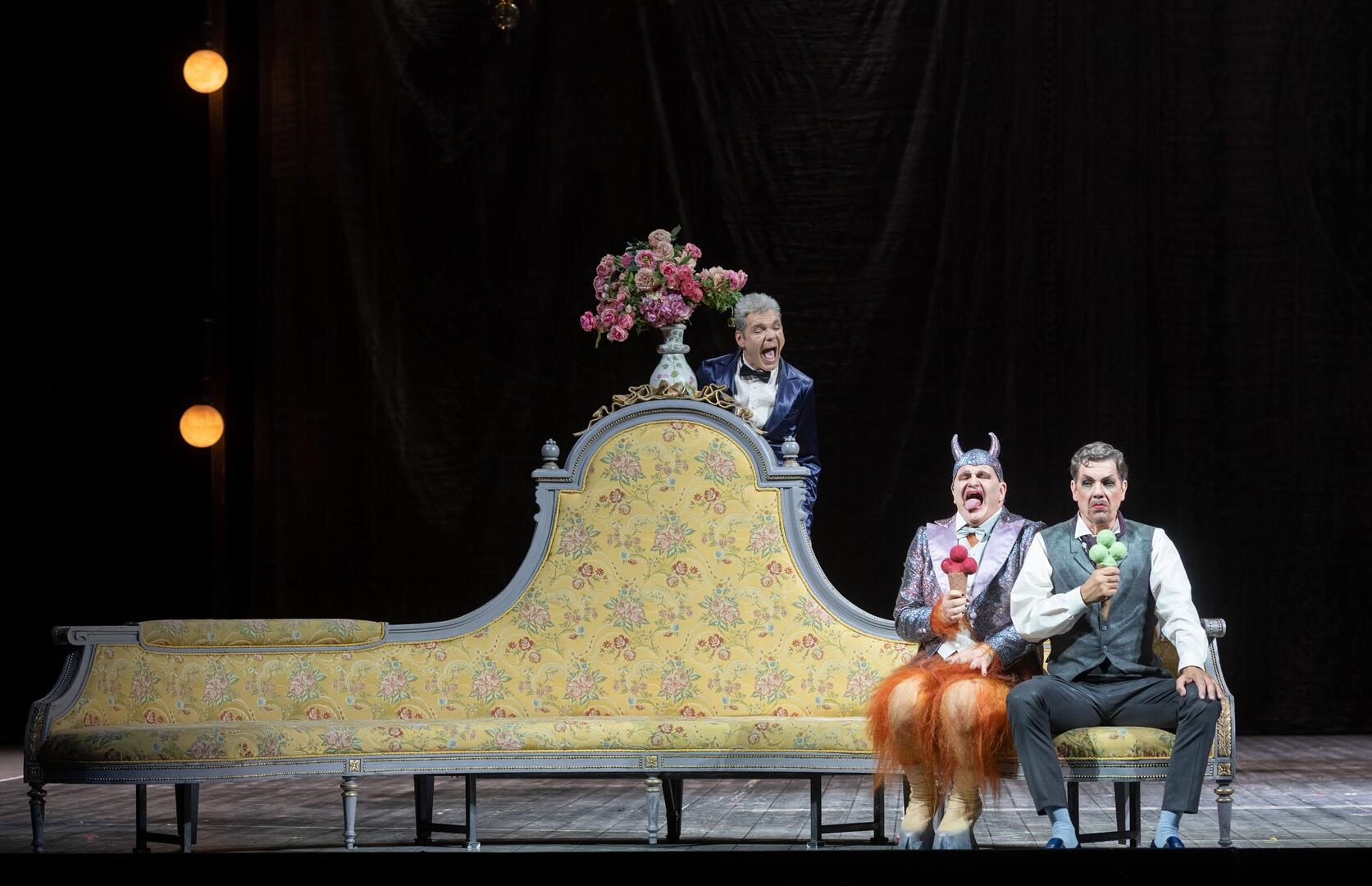 This production of Offenbach’s first large-scale hit was one of the rare opéra bouffe outings at the Salzburg Festival in 2019, coinciding with the composer’s 200th birthday. A DVD of that production is available, there was also a TV broadcast. As a consequence, many people will be familiar with this staging in which all characters expect John Styx are not allowed to speak for themselves. Instead, the entire dialogue is getting a over-voice by Mr. Hopp in German, while the remaining cast only acts in a lip-sync way and sings the music. 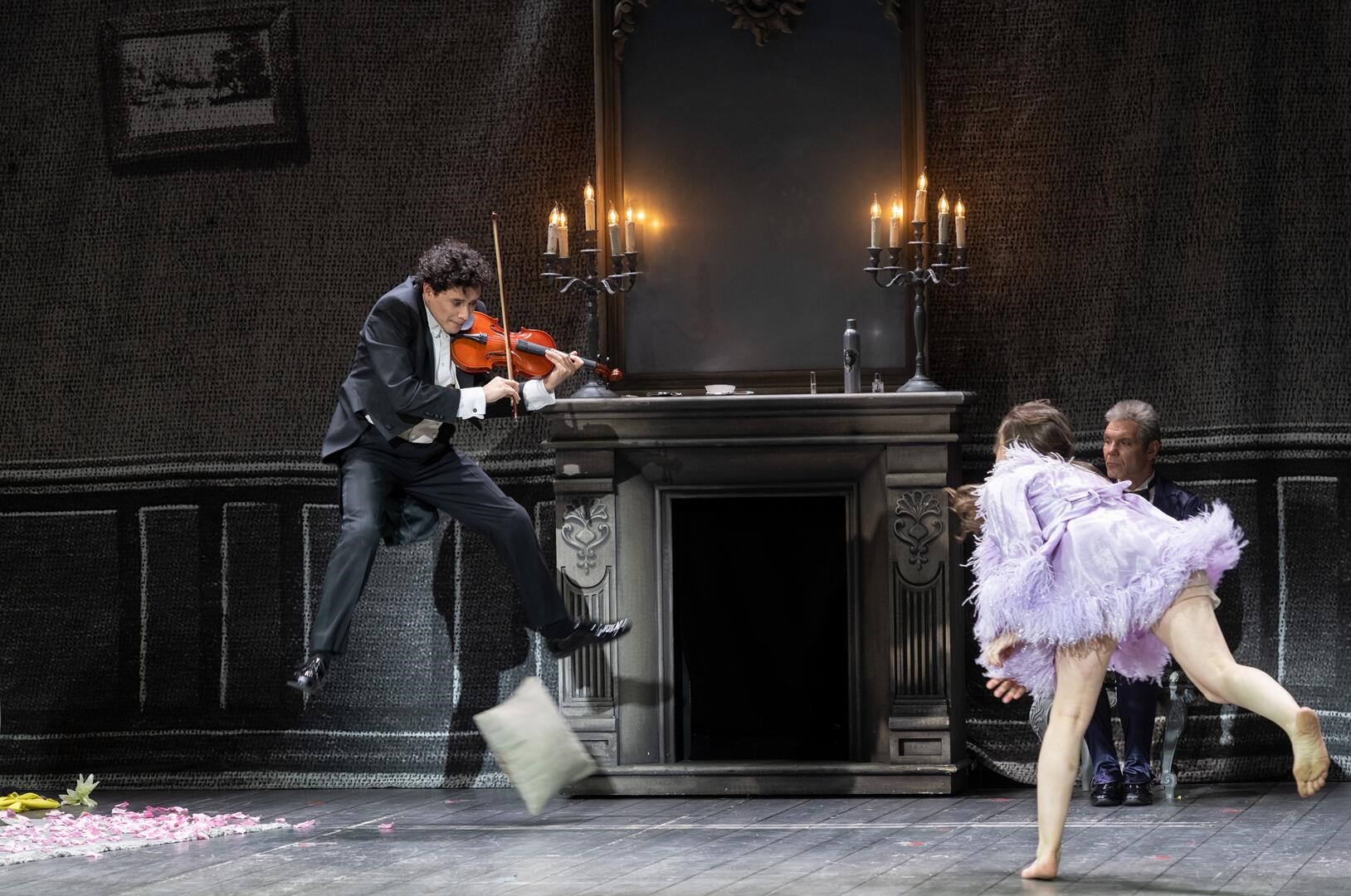 This concept was necessitated in Salzburg because the international cast there was not able to deliver the long dialogue in a way suitable for a Kosky production. Realizing this, the director decided upon this “deconstruction” as a gimmick. (Why he couldn’t get a different cast is anyone’s guess.) It worked well, for the most part, because Max Hopp is such a superb actor who knows exactly how to time the jokes and how to make every double entendre of the plot understandable. 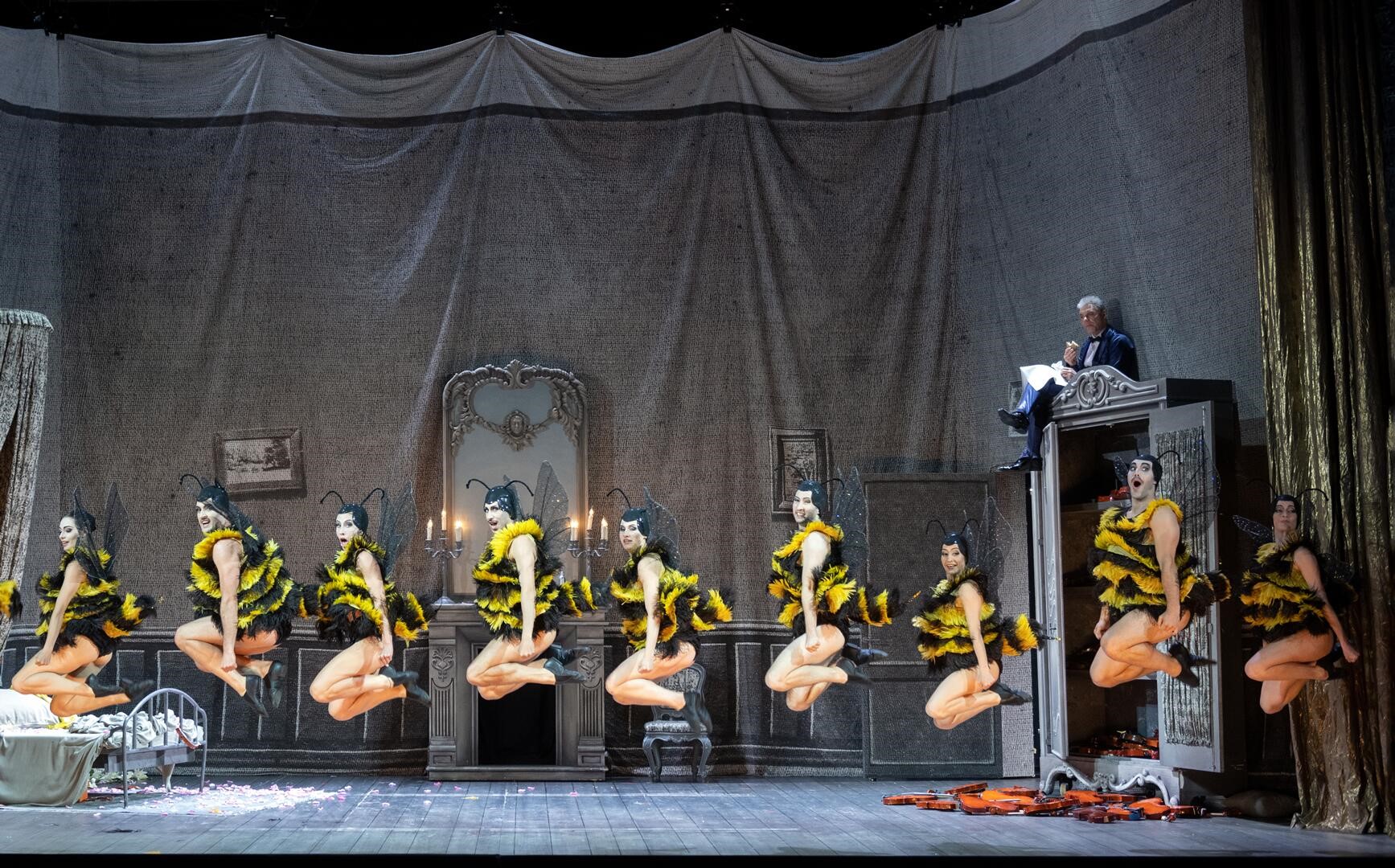 The arrival of Aristée in act 1 is announced by a ballet of bees. Max Hopp sits on top of the furniture and looks on. (Photo: Monika Ritterhaus)

Mr. Hopp is back as the center of attention in Berlin. As are Otto Pichler’s dancers who more or less steal the show as bouncing bees, glitzy devils or as can-can dancers forced to do high kicks in hell, even when no one is around anymore. As an eternal torment. (Nice interpretative touch at the very end.)

Everyone else is new. In the program booklet Kosky says Orphée is basically about Euridice, Offenbach’s first strong heroine who refuses to play along in the way men want her to play along. In Salzburg soprano Kathryn Lewek went through the staging like a wrecking ball, so hysterical that it was hard to take anything she did seriously, at least as a feminist statement.

Sydney Mancasola calms things down noticeably as the new Euridice, and that’s a blessing. But to be the true epicenter of the story she would need the have her own voice. And, after the novelty effect of hearing Mr. Hopp do the over-voice for everyone wears off, I longed for more than just Sydney Mancasola to speak up for herself. 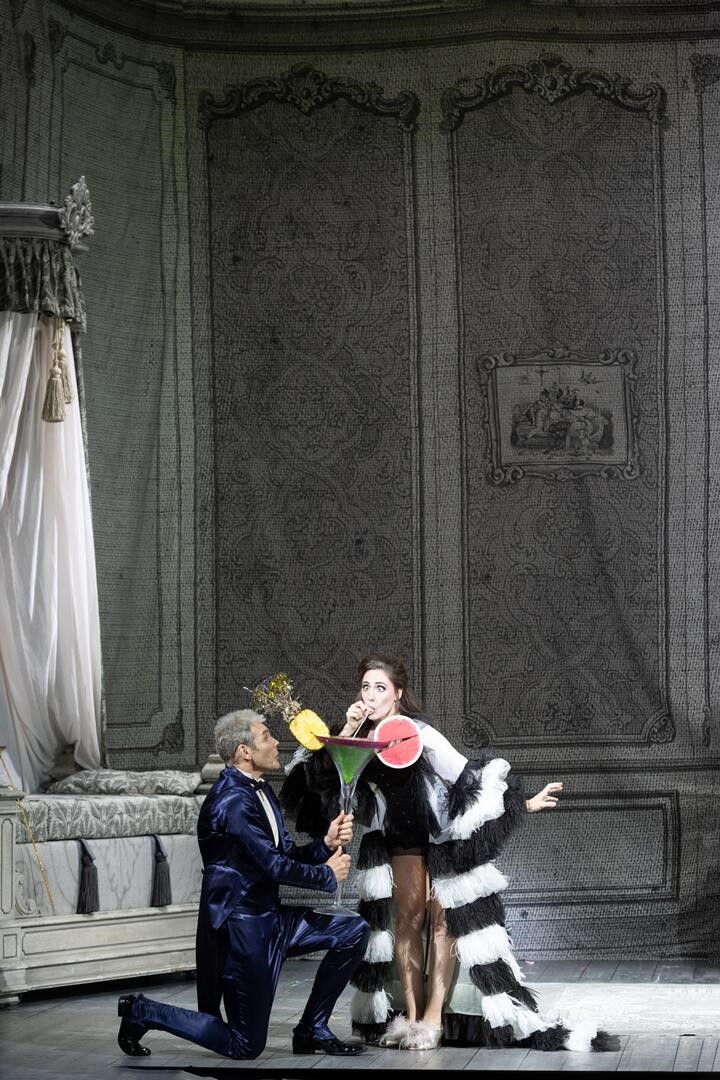 Sydney Mancasola as the new Euridice in “Orpheus in der Unterwelt”, with Max Hopp delivering all of her dialogue. (Photo: Monika Ritterhaus)

Why the Berlin transfer still uses the French lyrics for the musical numbers is a bit of a puzzlement. It would bring so much more immediacy to the production to stick with the German translation by Ludwig Kalisch (1858). Which is outstandingly good.

A brand new touch to the production is the casting of countertenor Hagen Matzeit as L’Opinion publique, bringing a cross-dressing element to proceedings that is fitting. And much more entertaining than Anne Sofie von Otter was in Salzburg. Though the blonde wig and black pastor’s daughter outfit remain unchanged. But since this Öffentliche Meinung also never gets to say anything herself, she is not the moral nightmare that sets the entire story in motion; and that, too, is a pity.

Adrien Perruchon conducts instead of Enrique Mazzooa (who I bumped into at the cloak room), there’s not much new to report about the musical interpretation. It’s somewhat sad that Kosky and his dramaturg Susanne Goldberg didn’t use more of the ballet music Offenbach wrote for the 1874 revival, especially since Otto Pichler’s choreography gets the most applause. When Götz Friedrich presented Orpheus in der Unterwelt at Deutsche Oper Berlin in 1984, he also decided on a mixed version, i.e. inserting elements from the 1874 re-write into the original score. But he used a lot more of that extra music, even though he did not have the fantastic Mr. Pichler by his side. (There is a DVD version available of that pretty outstanding Friedrich production.) 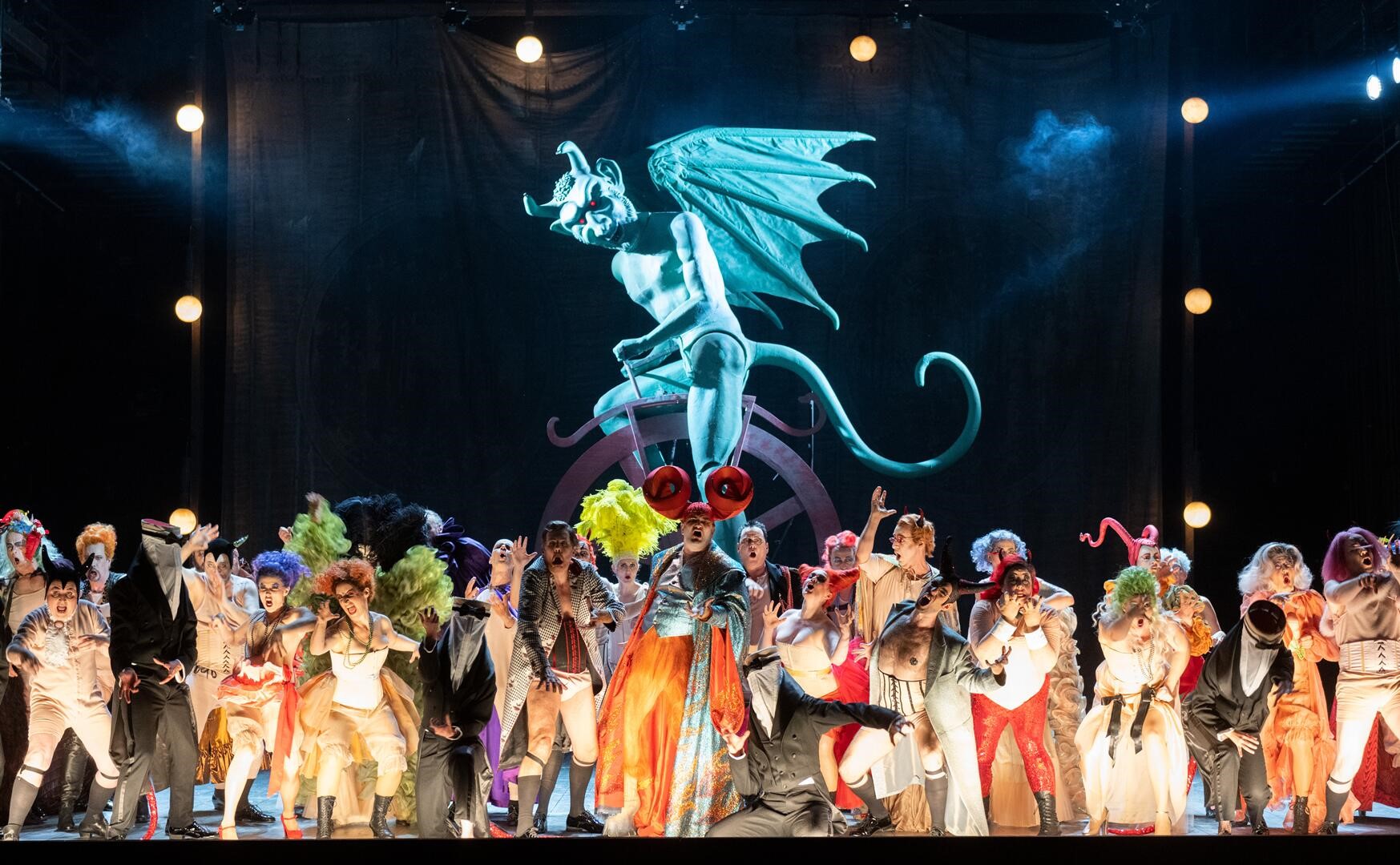 The full cast, chorus and ballet in the final scene of Offenbach’s “Orpheus in der Unterwelt.” (Photo: Monika Ritterhaus)

The premiere of the new Orpheus in der Unterwelt was the first time in 18 months that Komische Oper had a full-capacity audience, every seat in the house sold. And there was also, for the first time since Corona, a complete ballet group, chorus and ensemble on stage, as Mr. Kosky pointed out in his post-performance speech. The audience, having been starved of such spectacle for so long, reacted enthusiastically. And celebrated Max Hopp as their local darling being given another superstar turn. His singing of the Prince of Arcady song was – for me – the highlight of the evening, because here is all came together in the way it should in a perfect Kosky/operetta production.

There are performances throughout December. But Barrie Kosky already promised that this staging will remain in the repertoire “for years and years.” So, if you cannot come to Berlin to see the production now, don’t fret: it will be back!

For more details on the cast and upcoming performance dates, click here.