In November 2018 I reviewed a concert performance of Howard Goodall’s Girlfriends, recommending his previous musical The Hired Man which has just been revived at the Queen’s Theatre, Hornchurch and is touring to Hull and Oldham until July. 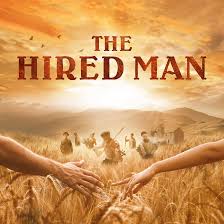 Poster for the 2019 production of “The Hired Man” at the Queen’s Theatre, Hornchurch.

For those of you who do not live in the UK, Hornchurch is in east London, and the theatre is one of the few in the UK still producing its own shows, Arts Council cuts over the years having decimated much regional theatre.

The Hired Man is billed as ‘a serious musical about ordinary people’, the ordinary people in this case being farm workers in Northumbria (north-west England’s Lake District) in the late 19th and early 20th centuries who attended twice yearly hiring fairs where they bartered for their labour, as in Flotow’s opera Martha.

It can rightly be called the first serious musical, just predating Les Misérables.

Although not through-composed, there is little dialogue, especially in Act One, and much of that is underscored, the music sounding like “choral music blended with an inheritance of the English folk tradition. From the ever-flowing piano line [...] to the mixture of anthemic chorales [...] the score sounding like the musical love child of Tallis and Vaughan Williams” (Tim Bano), with perhaps a touch of Copland!

After out-of-town tryouts, the show opened in October 1984 at London’s Astoria Theatre  – a vast converted cinema, totally unsuitable for any stage production, where it ran five months. It has since been frequently revived, especially by amateur companies but this is its first major staging for some years.

The book, by Melvyn Bragg, is based on the first of his Cumbrian Trilogy novels and concerns the passionate, epic story of John and Emily, a young married couple in 1898, and their struggle for survival over twenty years. Whereas Act One focuses on the married couple, their children and the local villagers over a few years, Act Two is less successful, attempting to whisk us through the formation of trade unions, miners’ strikes and the first world war.

The lyrics and music, both by Goodall, manage to transcend the weaknesses of the book completely, consisting of rousing foot stomping rhythms and soaring choruses, besides very tender ballads.

In an ensemble cast of eleven actor-musicians, all of whom play instruments to accompany the show – a technique developed at both Hornchurch and the Watermill Theatre, Newbury over the years – Oliver Hembrough acts the softly spoken John who marries Emily (Lauryn Redding). Both are thoroughly believable in role and successfully age twenty years during the duration of the show. Lara Lewis is highly successful as their daughter, May, displaying the quality of stillness to great effect, especially in moments of heightened emotion. There is a scene in Act Two where she is sitting onstage with Emily, holding her ‘cello, which is very moving by its lack of movement – in fact the direction by Douglas Rintoul is throughout very subtle, enabling the show to flow quickly, like a Cumbrian stream, whilst at the same time pointing the most emotional scenes by stillness: he has a good eye for a stage picture.

Jean Chan has designed a simple set over the full width of the stage, with a revolve which is not over-used as often happens, and a beautiful Turner like backdrop of the Cumbrian fells, enabling the actors to create their own space for each particular scene, such as when the pit (coal mine) collapses: here the actors use their instruments very effectively to give us the sound of creaking pit props. Her costumes, however, look too new, smart, clean and fresh and could do with ‘distressing,’ which they will probably get during the course of the run!

Lighting design (Prema  Mehta) is most effective, creating mood at the same time as ensuring that the actors’ faces can always be seen, which does not always happen!

In short this is a very worthy and timely revival of a show which has been described (Tim Bano again)  as “the greatest British musical of the last half century” and which has inspired great devotion amongst its many fans.

If you live anywhere near London, Oldham or Hull, this production can be warmly recommended, if only for the commitment of all those involved and for the wonderful, stirring music.

A recording of a 2001 concert performance is available on the That’s Entertainment label.