I recommend booking travel tickets now for Budapest – to arrive before June 9, 2016. That’s the date of the last performance of Emmerich Kálmán’s 1928 operetta gem The Duchess of Chicago at the Budapest Operetta Theatre (BOT). Here’s why. 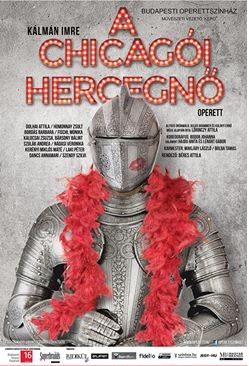 Poster for the 2016 production of “Herzogin von Chicago” in Budapest. (Photo: Budapesti Operettszínház)

The music: Kálmán’s 1928 score of catchy melodies with clever lyrics, gypsy music, flapper jazz, Viennese waltzes, classical music, a little Gershwin and Beethoven here and there, is the musical potpourri. Additional musical elements for this updated version are mock-Joplin ragtime piano phrases cooked up for the silent film sequences at the beginning, two songs from a previous show by Kalman, Golden Dawn (1927), another from a film, Ronny (1931), and the sounds of an organ in the pit.

This is the first time in its recent performing history that the directorial staff was able to honor Kálmán’s original wish to have three simultaneous ensembles employed: an onstage jazz trio (saxophone, guitar, and drums/percussion) that not only played song accompaniments but provided comic acoustical comments on some of the dialogue, and a gypsy trio (two violins and cimbalom) were featured, in addition to the pit orchestra. The two alternating conductors are Tamás Bolba and Lászlo Makláry.

A point of importance is that this score demonstrates just how music in the operetta genre was changing in the 1920s, and how Kálmán’s role in that change was pivotal. 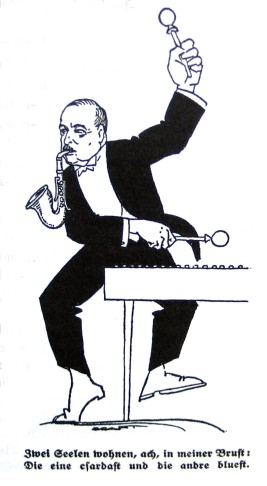 Though he hadn’t left the continent of Europe until 1940, he nevertheless voraciously ingested what was happening in the USA during that time. It was an intoxicating time of rapid social change, with the influx of a generation of newly wealthy industrial land barons, and a new form of music emerged out of realms of vaudeville and Tin Pan Alley – jazz. The great Jazz Age was in full swing in places like Chicago and New York, and Kálmán quickly inserted the flavor of it into European operetta, risking media opposition to his ‘sullying’ the Viennese traditions.

The plot: An independent, wealthy, sexually liberated American woman (Mary Lloyd) from Chicago meets an insufferably egoistic Old World Prince (Boris Alex) who’s the heir to the throne of a mythical kingdom in Eastern Europe. He’s indignant about her manner, her western music, her financial independence and the western hegemony she stands for. Yet, against these odds, they fall in love anyway and ostensibly live happily ever after.

Yes, it’s a predictable plot and certainly not the first one like it, but the way director Attila Béres (with a Hungarian translation by Attila Lörinczy) adapted the original script to incorporate amusing anachronisms in both the subplots and the overall structure by inserting other Kálmán songs and another role completely (that of the Grand Duchess of Silvaria, the tiny mythical kingdom), BOT has created a production that satisfies on every level of the several disciplines involved (with only one reservation which I explain at the end of this article).

That is to say, all the singers, dancers, designers, and musical elements (three ensembles, two of which are on stage) serve Kálmán’s superb score with consummate expertise.

The BOT production enjoyed a dual premiere: April 22 as a featured event in the Budapest Spring Festival, and April 23 for the local and international press. Each evening had a slightly different cast: Mary and Boris were played by Barbara Bordás and Attila Dolhai on the first night and Monika Fischl and Zsolt Homannay on the second. The role of the Grand Duchess was sung by Zsuzsa Kalocsai on both nights, as was the role of Mary’s assistant James Bondy played by Maté Kerenyi (who used an updated comic reference to filmdom’s James Bond). A dozen more minor characters circle around them as well as a chorus and dancing teams.

Bordás’ beautiful, seamless voice is a pleasure to hear; Dohai’s simultaneous singing and strenuous dancing was astounding; Kalocsai’s emotionally tinged voice brought a palpable empathy to her role; and Kerényi’s successful combo of comic character and young leading man was embodied in superbly skilled dancing and singing. His love interest, Rosemary, the wacky daughter of nearby Morania’s Grand Duke who wanted to arrange a marriage between her and Boris, was played by Annamari Dancs and Szilvi Szendy on the two nights, respectively. Dancs and Kerényi complemented each other with charming chemistry that read beyond the footlights. Solo dancer Bálint Papp’s facile stint as a rag doll tossed around by Mary as she sang “Dear Prince,” to Boris, explaining why she thought a prince was made of straw, was a particularly clever bit. 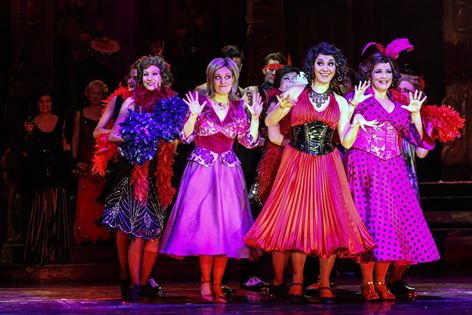 The fascinating sociology: As a base, Duchess’ plot gives us a slice of real-time 1928 sociology.While it’s easy to regard it as simply a musical boxing match between old and new music and dance traditions as exemplified by a duel between the Charleston and the Csardas, the mise-en-scéne here also references the political cabaret that was happening in Vienna, Berlin and Munich at the time, and directly addresses the impact of America, of jazz and of social revolution. The first hint is the entrance of Mary and her entourage, which is underscored by a recording of the “Star Spangled Banner” that quickly slows down to an awkward halt. She immediately introduces her personal jazz trio (led by saxophonist Bálint Bársony), which sets up a potential clash of cultures.

Because of her immense wealth, Mary also symbolizes the ominous American fiscal hegemony of the early 20th century.

She and her pals from the prestigious families of Vanderbilt, Rockefeller, Ford, Astor, and Carnegie are continual sources of awe and jealousy by the local women.A fiercely independent kind of female was not commonplace prior to 1925. The examples of Ms. Rockefeller, Lloyd, and Rotschild doing as they please anywhere in the world suggest to Europeans that all American women are wealthy and sexually free.

Between 1895 and 1925, the western world saw one of the greatest sociological phenomena to occur in centuries. Women stepped out of the subservient shadows of men and into a society where they no longer needed their fathers, brothers, or husbands to control every aspect of their lives.

From the mid-1800s, various states in the U.S. and countries around the world, in a  slow succession, began to allow women to own property, receive an inheritance, get a job, and attend college. However, most of these progressive laws applied only to married women. The shift happened around the end of that century as Sweden paved the way for women, single or married, by granting them all the rights previously enjoyed only by men. Exactly 100 hundred years ago, the intrepid suffragists of New York City took to the streets to march for the right to vote; in 1920, that law was passed.

The image of the “Libertine” female began to appear in operetta, vaudeville, and musical theatre, as she now had new-found rights and privileges to create her own identity and destiny.

One of the best visual markers of this transformation was fashion. At the end of the Victorian Era circa 1900, women’s attire covered 95% of their flesh, leaving open only the face and hands. Year by year, the layers of fabric were discarded, hems were raised, sleeves came off, and shoulders were bared. By 1928, the height of the dizzying Jazz Age in America, women, in comparatively skimpy clothing, were drinking alongside men in bars, travelling alone, and appearing as well-known artists on stage and screen. 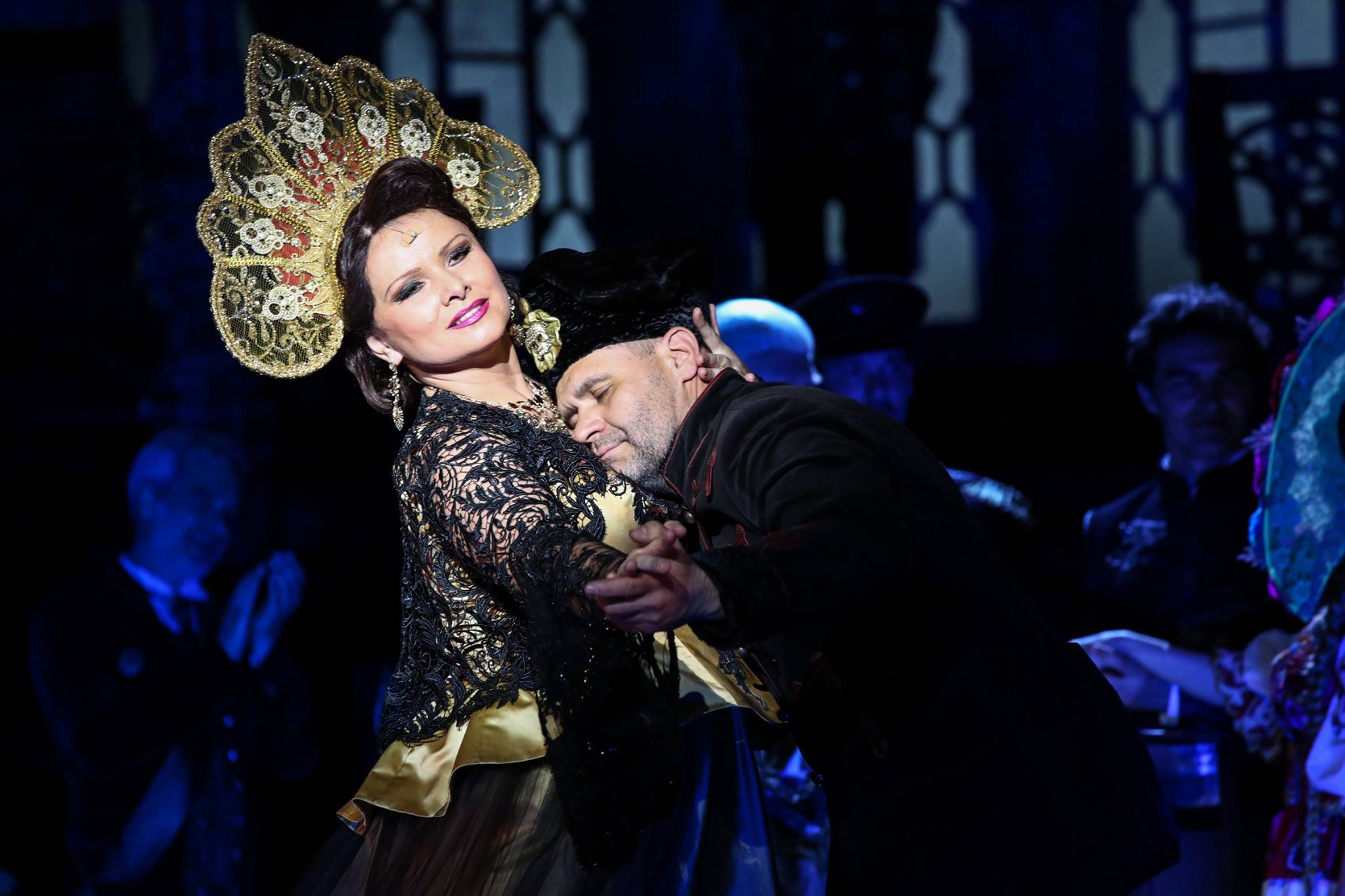 The visuals: the fantastic array of costumes, designed by Rita Velich, depict many eras from the sumptuous beaded gowns of 19th century royalty to 20th century night club dance duds; and, in Act II, iconic costumes of numerous Hollywood stars both human and cinematic.

My one reservation: The unfortunate American practice of over-miking Broadway productions and touring shows has infected Europe, and this performance caught the virus. Keeping the volume levels at near-maximum treats the audience as if they are hard-of-hearing or just plain deaf. It robs us of theatrical intimacy and steals the sympathetic qualities of the characters because they seem to be screaming their way through a production.

Importantly, over-miking doesn’t allow the actor/singer to be a truly expressive artist who knows how to modulate their own volume control according to the demands of the script and score. Employing a sound engineer to keep almost all the speech and singing at a fortissimo level doesn’t pull us in, in fact, it makes us lazy, tuned-out listeners because it’s not human any more – it’s electronic. Fortunately, this problem can go away with a simple turn of the dial. 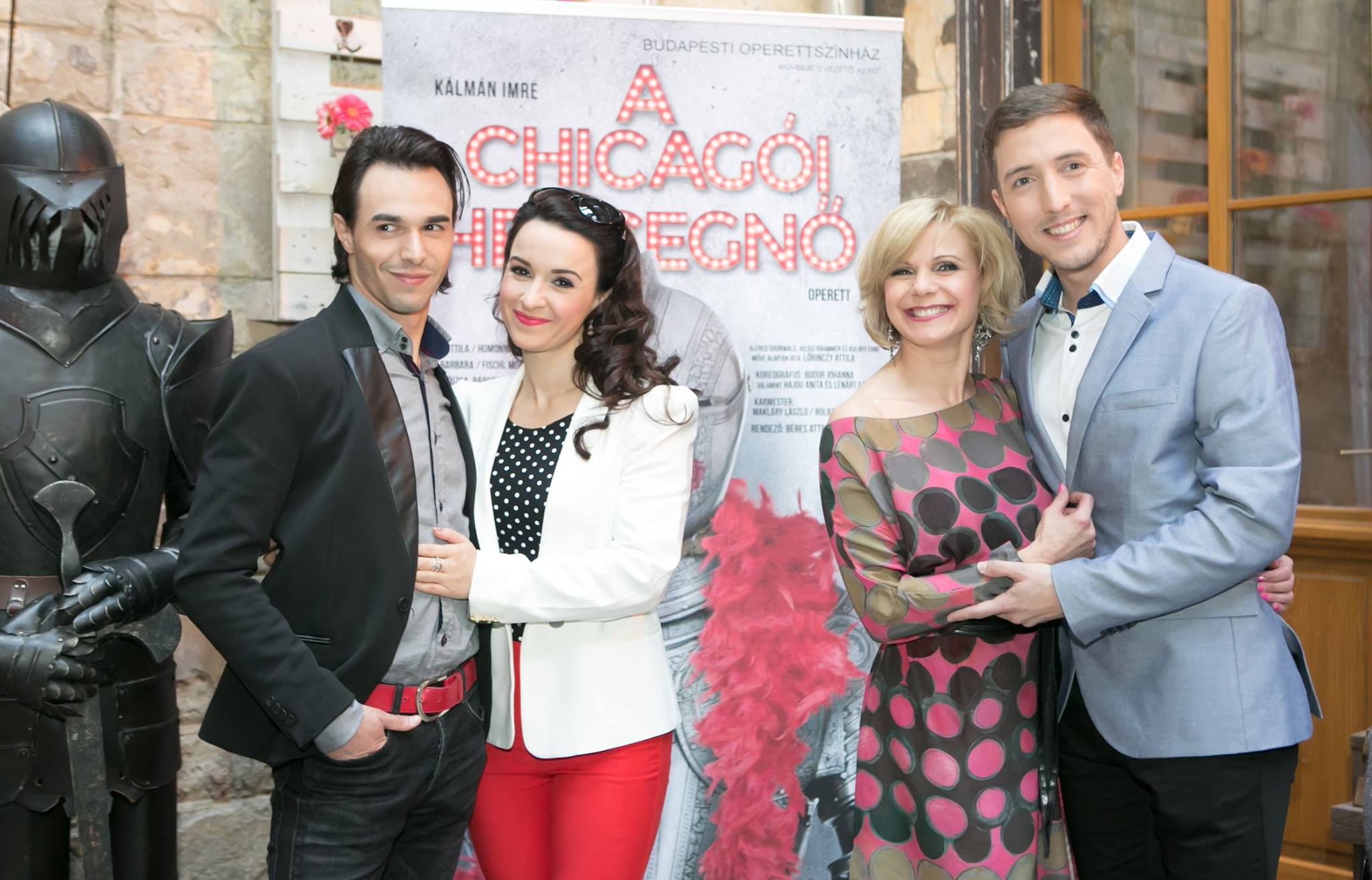