So, now it’s official: James Gaffigan will be the new music director of Komische Oper Berlin. The 43 year old New Yorker was presented to the press today by the two new artistic directors of the house, Susanne Moser and Philip Bröking, who take over from Barrie Kosky after the end of the current season. 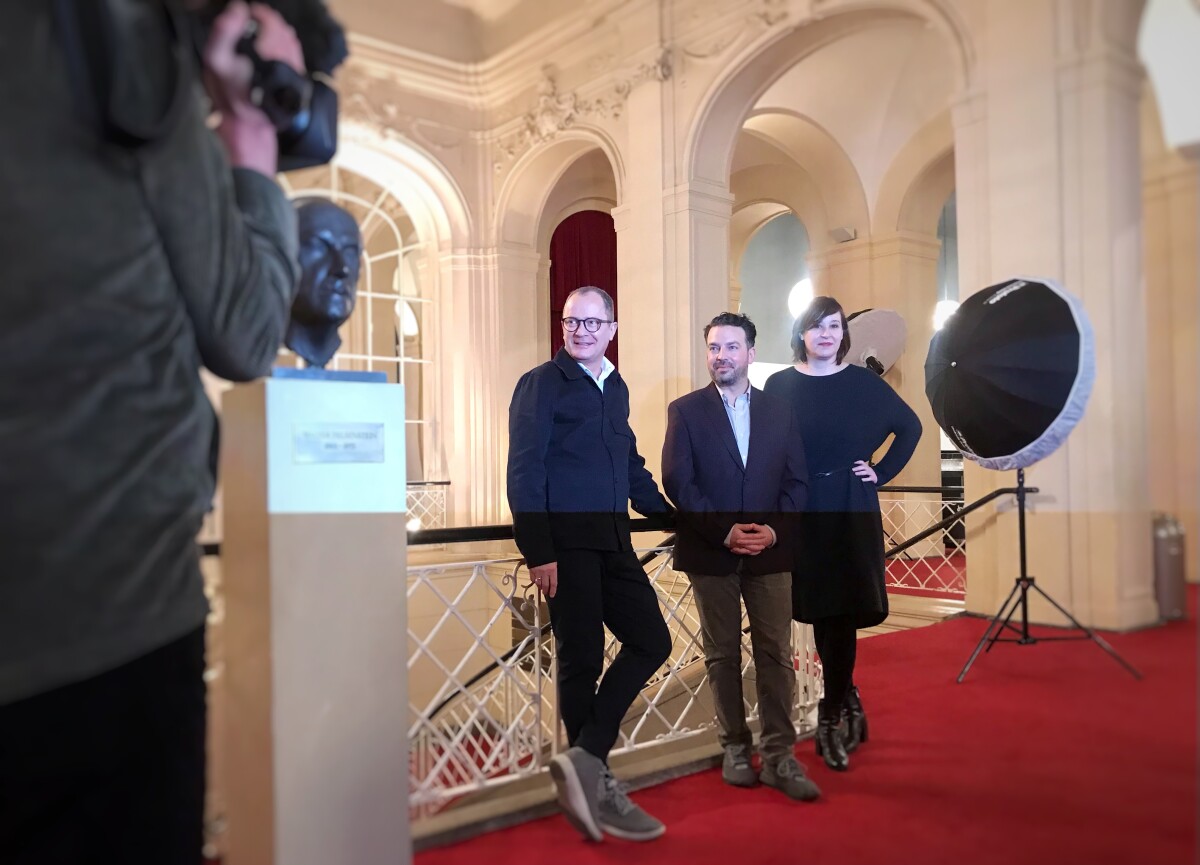 Bröking explained that Gaffigan “is an incredibly cool guy” who is “young and hungry” for adventure. According to Mr. Bröking, he’s also someone interested in “the less frequently traveled roads” of the repertoire and values “perfectly executed entertainment”. Something he will demonstrate in the 2023/24 season with his first big production of a Broadway musical. Which title that might be was not revealed, despite various reporters asking for details.

When questioned about operettas, Gaffigan said to the Operetta Research Center that no respective titles have been selected for or by him. So it seems he won’t be delving into that repertoire, at least not immediately.

What Gaffigan did mention was “a Russian piece” and a “grand spectacle” piece by “an American composer”. Which could be anything from Bernstein’s Mass to a Philip Glass opera or Tommy. To name just a few.

Mr. Gaffigan can first be heard at Komische Oper in the next New Year’s concert on 1 January, 2023. But he doesn’t start fulltime till be following season when the company moves from Behrenstraße to Schillertheater in Berlin-Charlottenburg for the time of renovation and rebuilding of their old house. Because Komische Oper will not exclusively perform at Schillertheater but also venture out to other places, there’s a chance that you might catch Mr. Gaffigan in some cool new locations. Groups such as tutti d*amore have recently demonstrated how inspiring it can be to perform operetta in places beyond the beaten track (for more information, click here).

Till Mr. Gaffigan arrives, the young Erina Yashima will take care of musical matters as “1. Kapellmeisterin”. Later, the two will form a team to steer the company to new horizons.

Interestingly, James Gaffigan pointed out that he does not wish to return to business as usual after the Corona pandemic, instead he sees Covid-19 as a chance to rethink how we want to present musical theater. Talking about concerts, he mentioned a desire to include spoken words, poetry, and other art forms, to make the music more interesting.

He also wants to be the face of future education projects. Because musical education and reaching out to tomorrow’s audiences is important to him. 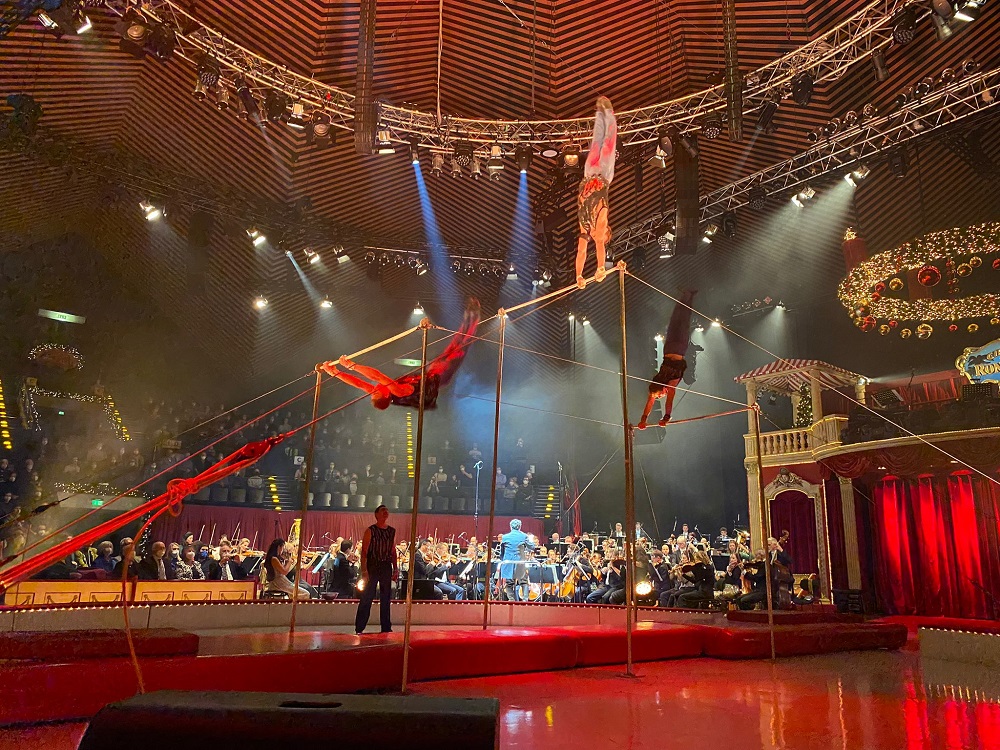 In the future, he’ll divide his time between Valencia in Spain and Berlin. What he’s especially looking forward to in Berlin is the openness to be found here; the diversity of Berlin and the Berlin audience is something Kultursenator Klaus Lederer also stressed in a video message. He said the multitude of groups – ethnic background, sexual orientation, social position – is something that links Berlin with the Big Apple. So Mr. Gaffigan should feel right at home.

Just a few days ago, Gaffigan demonstrated his greatest showman talents conducting the New Year’s concert of the Deutsches Symphonie Orchester at Circus Roncalli. Coordinating the acrobats and the music and making sure every artist lands on the exact right note is no easy task. Mr. Gaffigan managed it with bravura and with an infectious smile. 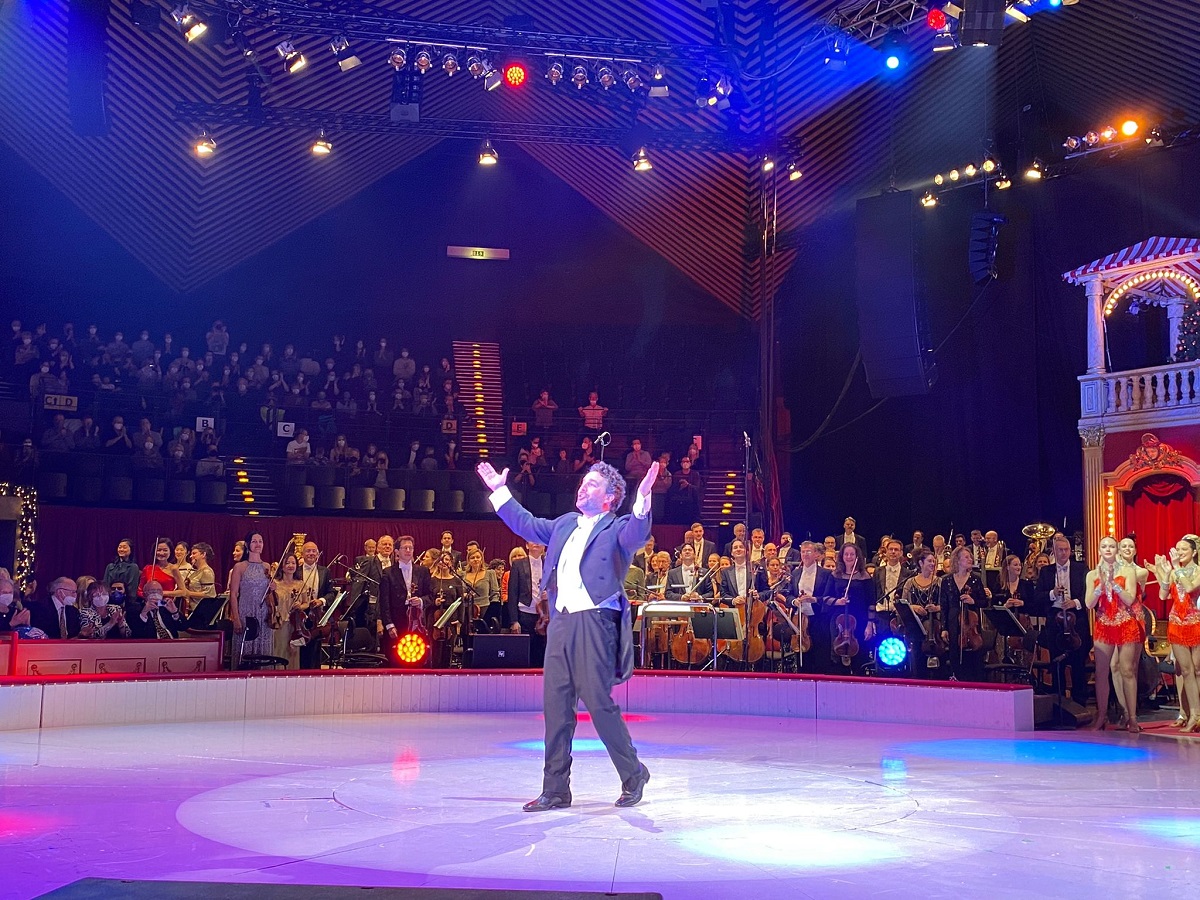 Komische Oper also announced that Johanna Wall will be the new Chefdramaturgin, following Ulrich Lenz he departs for Graz after ten years in Berlin.

In the second half of April the new artistic directors, Moser and Bröking, will present the titles for next season and their basic plans for the future. What the general new focus in terms of popular musical theater will be – after ten years of works from the Weimar Republic and by Offenbach – remains to be seen.

Barrie Kosky leaves a gigantic legacy that is hard, yet not impossible, to follow. After stressing the house’s 1920s past with Paul Abraham and Fritzi Massary works, it’s imaginable that a new (critical) spotlight will be put on the Nazi era or the DDR years with all of their socialist operettas. Or something completely new…