I knew that I should enjoy this 1927 French operetta directly after I read Richard Traubner’s dismissal of Marcel Lattès in his Operetta: A Theatrical History. Mr. Traubner has presumably never heard a note of Le Diable à Paris, let alone seen a production of one of Marcel Lattès’ dozen or so other stage works, one of which was written for Charles Cochran in London in 1919. Diable à Paris is in reality great fun, especially as performed on this two CD set by Les Frivolités Parisiennes. 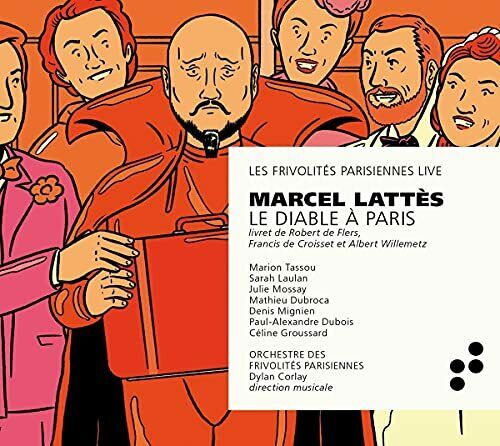 Lattès was born in Nice in 1886, studied piano and composition at the Paris Conservatoire under the famous organist Charles Marie Widor and composed between 37 and 48 film scores, depending on which biography you read. As a Jew he was arrested and interned in 1941, dying in Auschwitz in 1943. (For more information, in French, click here.)

Le Diable a Paris was staged at the Marigny Theatre in Paris in 1927, where it was supposedly the first ‘swing’ operetta to be seen in Paris. The notes in the CD booklet go as far as to suggest a jazz influence, but to my ears it has all the hallmarks of the Jerome Kern Princess Theatre shows such as Very Good, Eddie – and nothing wrong with that! 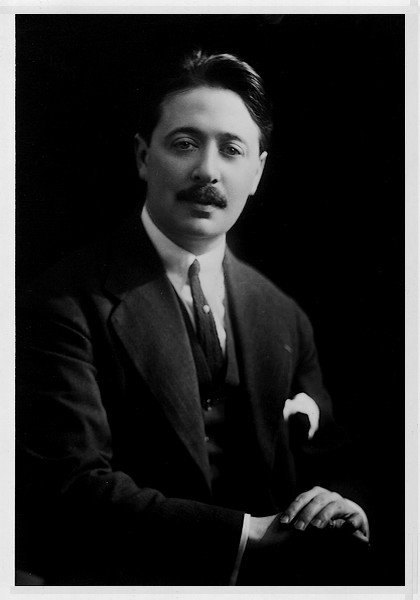 The composer Marcel Lattès, as presented on the website www.musiques-regenerees.fr.

The plot is clever, being a version of the Faust legend, though Lattes resists quoting any Gounod until Act Three!

André has been jilted by his mistress, Paola de Walpurgis. At Guetary Railway Station in the Basque country he sees Marguerite helping her Aunt Marthe who is the level crossing gate keeper. Entranced by her (= Marguerite) he pretends to be the conductor of the train. Marthe is courted by the aged Fouladou whose advances she rejects. Annoyed at this, André and Fouladou appeal to the Devil. He agrees to help them on the condition that he is immersed in the atmosphere of Paris again, a Paris he has not known since the mid-19th century. 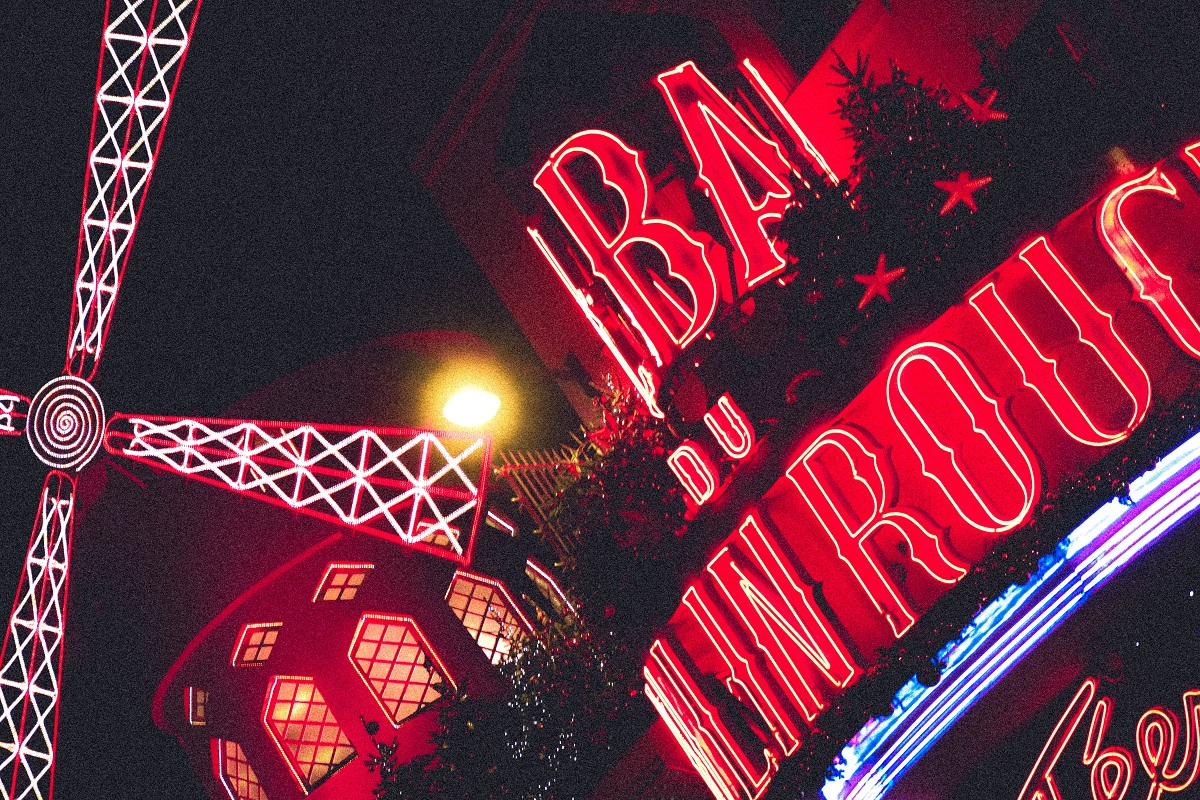 Paris at night is not what it used to be. (Photo: Karina Lago / Unsplash)

But in the capital, everything has changed. He discovers that humans are even more treacherous than he is, especially as his memory is going… You could ask if this the first and possibly only operetta that deals with dementia?

Rather than include dialogue by Albert Willemetz and Francis de Croisset, which in the CD notes is described as “lengthy and numerous”, a narrator, the effervescent Céline Groussard, links the musical numbers. Her diction and enthusiasm are not in question, but one tires of hearing it every time! 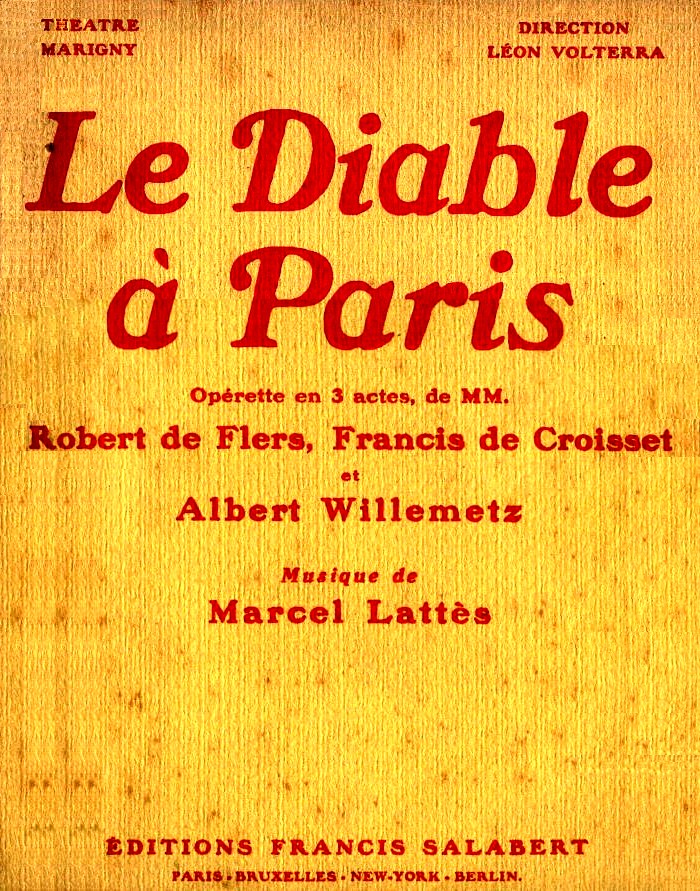 Also, whereas the sung libretto is printed in both French and English, there is no English translation of the narration. However, my 55-year-old ‘A’ level French came in useful, as did a dictionary for words I had either forgotten or never had to learn all those years ago!

Performances are universally superb! All soloists are true ‘singing actors’ and put over their numbers with panache, making them sound, perhaps, better than they really are.

Sarah Laulan as Marthe is a good example: her couplets on CD 1 (track 7) are a total delight to listen to. She has a true Gilbert & Sullivan-style contralto voice and puts over the humor and meaning of her song, even if one doesn’t understand all the words at first hearing!

There’s Denis Mignien as Le Diable himself, next to Mathieu Dubroca as André and Marion Tassou as Marguerite. Plus Paul-Alexandre Dubois as Fouladou. 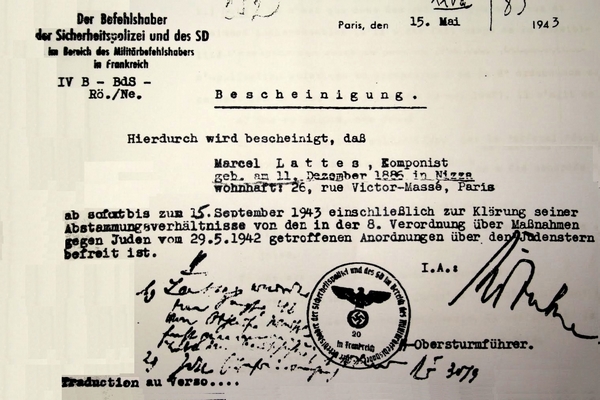 The exemption of the Germans, granted to Marcel Lattès in 1943 till September 15th – until then he had to prove his “Abstammungsverhältnisse”, i.e. whether he was of Jewish origin or not. (Photo: www.musiques-regenerees.fr)

Printed musical material for this show seems to have vanished. Les Frivolités’ performance is based on two radio versions, one from 1949, and another, conducted by Marcel Cariven, from 1957, though some sources date this from the 1960s. All the music and orchestration had to be transferred manually from these sound recordings – a true labour of love.

Was it worth it? Undoubtedly, yes!

The result is a frothy, witty, typically French confection. A co-production with Atelier lyrique de Tourcoing and the Théâtre imperial de Compiégne.

Not a great operetta, whatever that is, but one which I have been playing endlessly since it arrived, with great enjoyment.