It’s impossible to just write a review about the artistic merits (or non-merits) of the new tutti d*amore production that’s essentially a double-bill of Franz von Suppé’s Die schöne Galathée (1865) and Paul Lincke’s Lysistrata (1902). Because this queer feminist “operetta happening” is so much more than just beautiful music sung in this or that way. Instead, seeing this production at Zirkus Mond, and being part of it as a spectator, is a revelation. 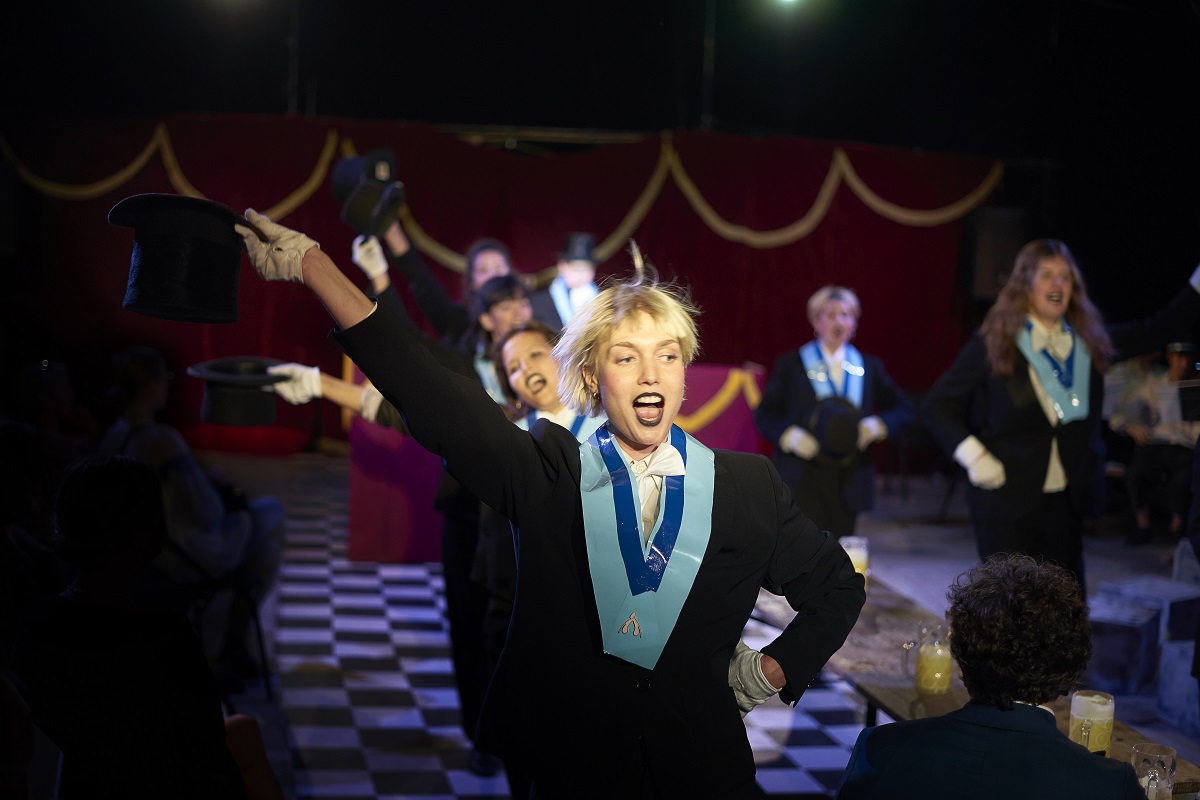 Caroline Schnitzer as the mistress of ceremonies who guides in the audience at the beginning. (Photo: Matthias Pfänder / tutti d*amore)

The most important revelation is that if you want to attract new audiences and interest them in operetta you must leave old venues behind and venture into new territory – where new people want to go. Or are already to be found. Zirkus Mond is located in a dusty area next to the train tracks of S-Bahn station Greifswalderstrasse in East-Berlin. The actual circus tent is at the edge of a large terrain filled with improvised-looking wooden huts and edifices that give the location a certain Pirates of the Caribbean feel. In fact, this area is usually used on weekends for rave parties. And the audience that came to see the Suppé/Lincke performance seemed as if they had just come from such a party – or where about to go to one afterwards.

That was refreshing, and certainly in sharp contrast to the atmosphere you’ll find in more established operetta venues, be it Komische Oper Berlin, Staatsoperette Dresden or Gärtnerplatztheater Munich, or Ohio Light Opera in Wooster for that matter. These people were obviously not there to see and hear “traditional” operetta. Instead, they were curious about a group of performers that they could relate to and that promised them an apocalyptical festival entitled Magna Mater. 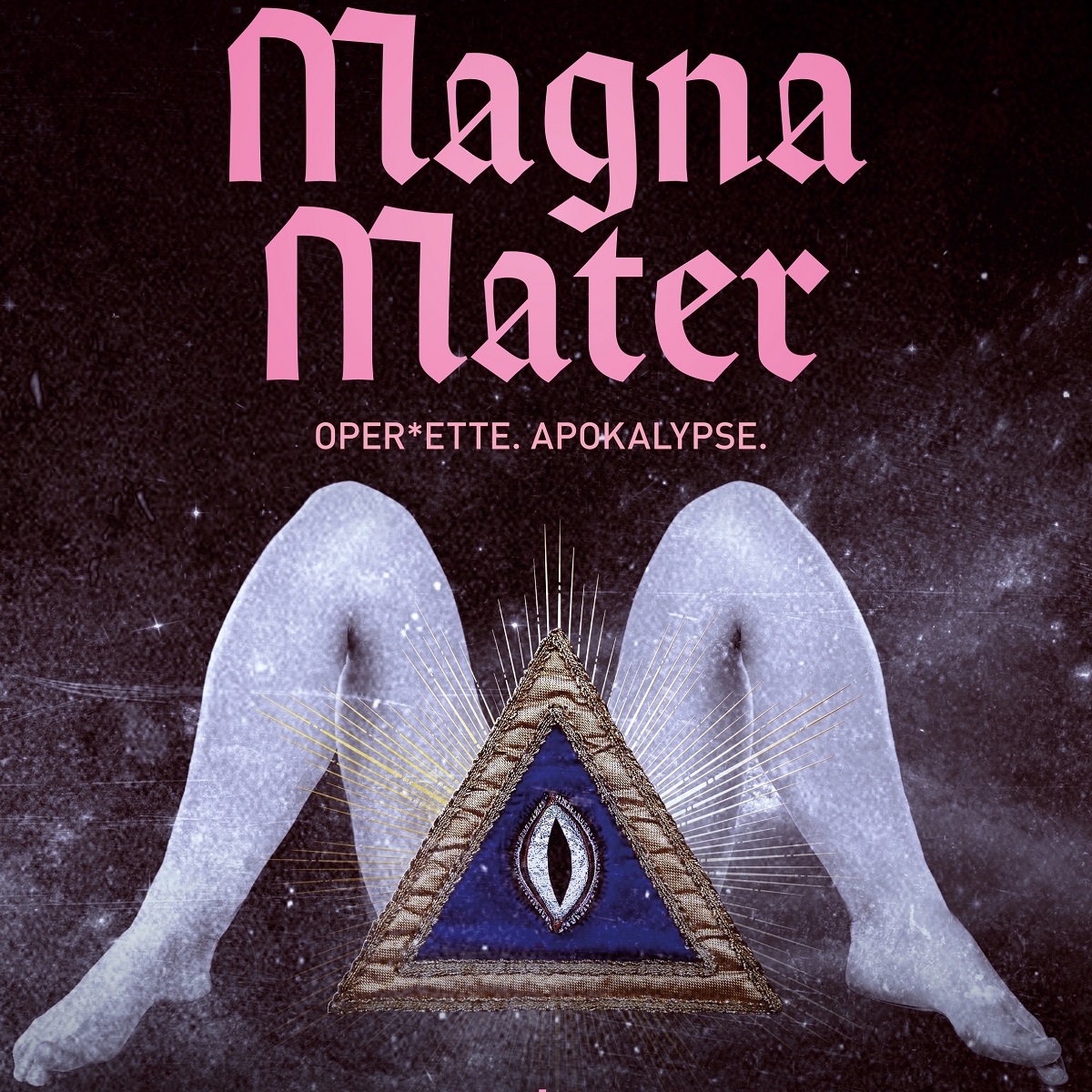 The idea of stage director Anna Weber and dramaturg Deborah Maier is to present the double-bill as an annual ritual in which the women – who have taken over the power from men – celebrate their matriarchy with music, sketches and dancing. For this year’s ritual they have chosen Die schöne Galathée as a piece that tells the “origin story” of female empowerment, with Galathée (Stella Hanbyul Jeung) turning against Pygmalion (Ferdinand Keller) and enslaving him, instead of the other way around. A chorus of women comments on the progress of the story, and the men – who play the parts of Pygmalion and Mydas (Ludwig Obst) – are brought out of a cage and are forced to perform, before being put back behind bars. 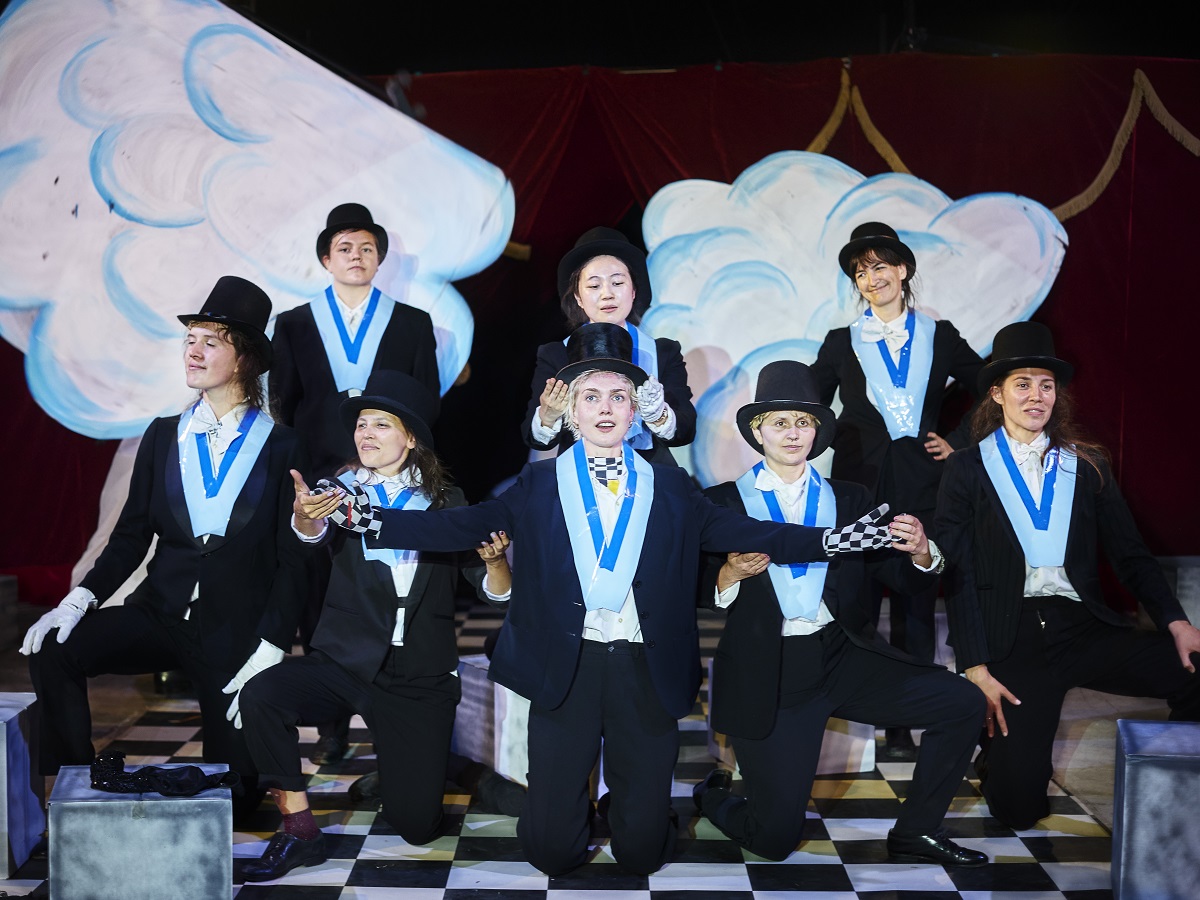 The chorus of the Magna Maters (with Caroline Schnitzer in the middle). (Photo: tutti d*amore)

The full-capacity opening night audience was divided into various groups and seated in different sections of the circus. Since I was part of the “underprivileged little men” I was led in on a rope, like a slave, with Caroline Schnitzer as overseer and mistress of ceremonies. A job that Miss Schnitzer fulfilled to perfection, before slipping into the role of Galathée’s servant and filling the huge tent with her amazing voice, without amplification.

After the abridged Galathée – accompanied by a 10 person orchestra with Paul Heller as musical supervisor – there’s an intermezzo with three bawdy scenes, each involving a female medical specialist explaining how the women in this new world order multiply. Caroline Schnitzer demonstrates how the men are ‘milked’ like cows, so that their sperm can be processed further as delicious “milky bars.” It’s glorious to watch and presented by Miss Schnitzer in such a way that you will not easily forget it. 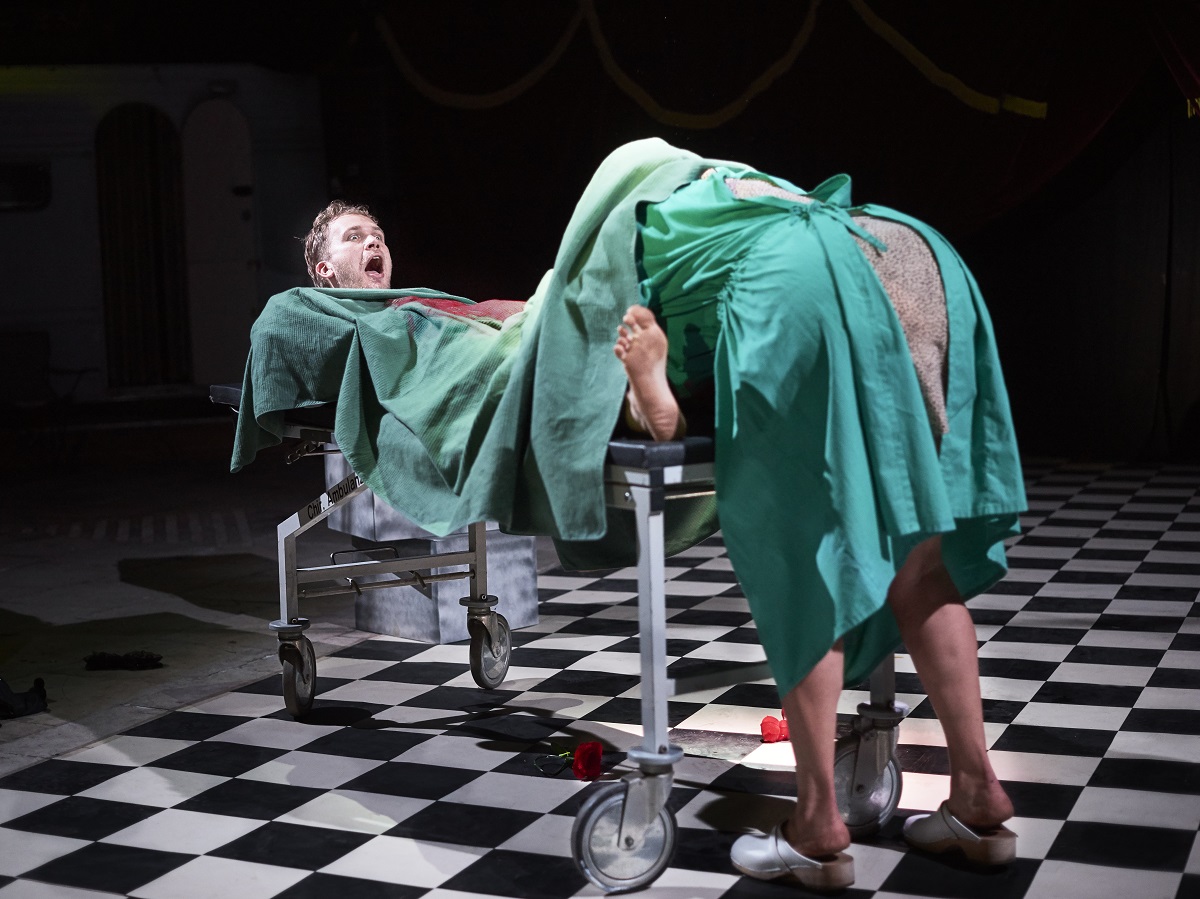 A little later, Gina May Walter examines the male body (of terrified Mr. Keller) to show that there’s really “nothing special” to it. Before that scene, Miss Walter had been a one-of-a-kind Goddess Venus who gives life to the statue Galathée. Seeing (and hearing) Miss Walter with a blond wig, long blond pubic hair and a grotesque body suit was an apparition I shall also not easily forget (costumes: Tatjana Reeh). Actually, it was one of the most memorable operetta apparitions since Dagmar Manzel played the Grand-Duchess of Gerolstein in similar over-the-top style many moons ago. Miss Walter might not be that type of super star actress, but she’s a true entertainer with perfect comic timing (delivering her dialogue in English), and with an outstanding voice that seems to want to go into Hojotoho mode any moment. She should go far in terms of a career! 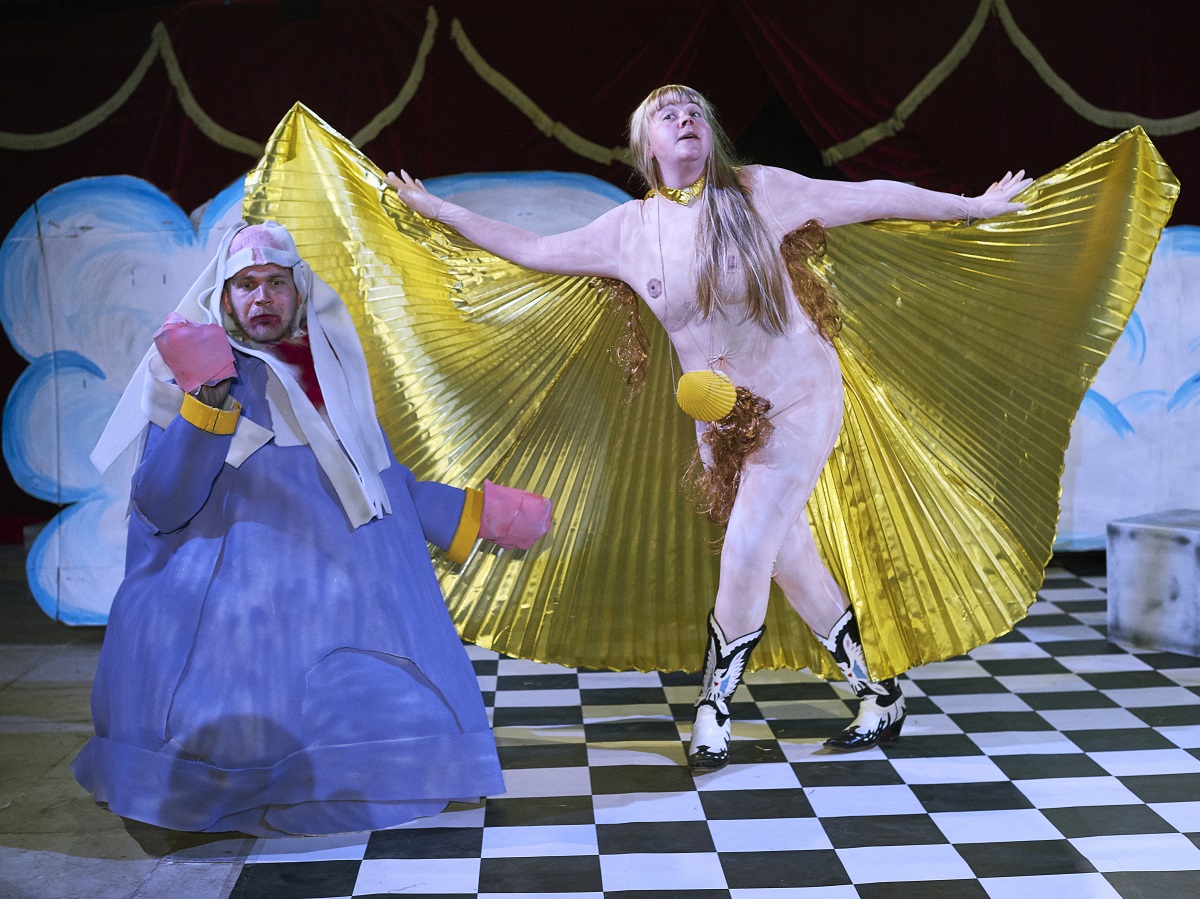 During the interval, the “privileged” sections of the audience were allowed to enjoy drinks outside, while the “underprivileged” group was led behind the tent. There, the story picks up again when the men (Themistokles: Ferdinand Keller and Plautius Hodini: Ludwig Obst; plus Johannes Bauer, David Gauffin, Andrea Richter, Martin Correa, Yonatan Erez, and Matteo Vercelli as the ‘male chorus’) decide to revolt against the way they are treated by the women (with Saskia Kollbach, Sarah Schäfer, Franka Pätzke, Angi Schug, Theresa Tripp, and Rike Kohl as the ‘female chorus) .

In a reversal of the Lysistrata plot they decide to withhold their sperm and any form a procreational sex. And they sing some of the rousing Lincke numbers outdoors in something like white Greek tunics. The men from the audience are asked to join in and learn the choreography, before Plautius Hodini changes into a giant scrotum costume and storms back into the tent, where the women and privileged audience members have been enjoying their parallel feminist version of Lysistrata (with Gina May Walter in the title role). 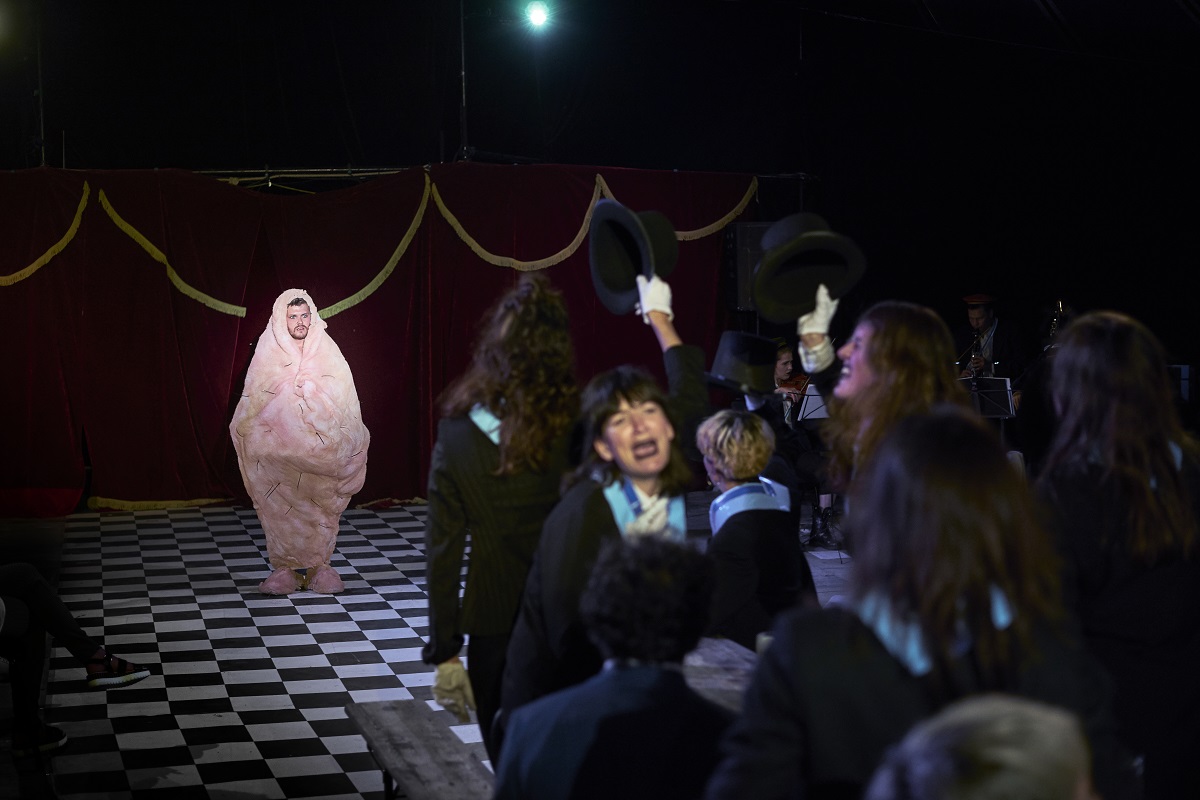 A battle of the sexes erupts. And it’s acted out in slow motion, looking like straight out of a Marvel movie. In the end, we realize that there can never be peace between the gendered groups, because even when women rule the world they behave just as badly as the men did before. When everyone is dead and lying on the floor, we see a light from above and hear a child’s voice proclaiming that we must overcome the male-female binary, and all be “it.”

This makes perfect sense after the previous three hours. And to a glorious SciFi arrangement of Lincke’s finale (re-composed by Maria Solberger), coming from loudspeakers, the entire cast, chorus and orchestra gets up and walks towards the light.

It was a moment of Spielbergian grandeur that took my breath away (visuals and animation: Marie Schwab). Afterwards, there was immense cheering. Many curtain-calls. And then everyone went out to continue the festival under Berlin’s night sky with beer, wine, a DJ and strong beats resounding through the air.

As I sat in the performance, I kept being amazed how the young audience around me had absolutely no problem enjoying the old-fashioned Suppé and Lincke music. They sucked it up, because it was presented as ‘play’ and ‘fun,’ with a message and with a roughness that you’d never find in a regular theater or concert venue when a typical symphony orchestra and normal opera singers present the genre.

Here, a new generation has taken over: as performers and audience. And I, as one of the oldest people around, did not feel out of place or unwelcome. On the contrary, afterwards a friend who’s even older than me (yes, that’s possible) and I stood for a long time chatting with people, taking in the atmosphere and going with the flow. He was as enthused as I, by the way.

Went with @kevinc19671 to see #tuttidamore feminist/genderfuck mashup of von Suppe and Lincke. An ingenious reimagining of two anti-feminist classics, with fine singing and musical direction. Like classic operetta on LSD! pic.twitter.com/MeFzWQoGbc

To see two classic operettas from Vienna and Berlin in such way, with such energetic young performers and combined with such hilarious sketches (and poetry) made me realize: there can be a future for operetta, and operetta can be combined with everything, no matter how absurd or weird, as long as it remains entertaining. Because that’s the glory of operetta: anything goes! 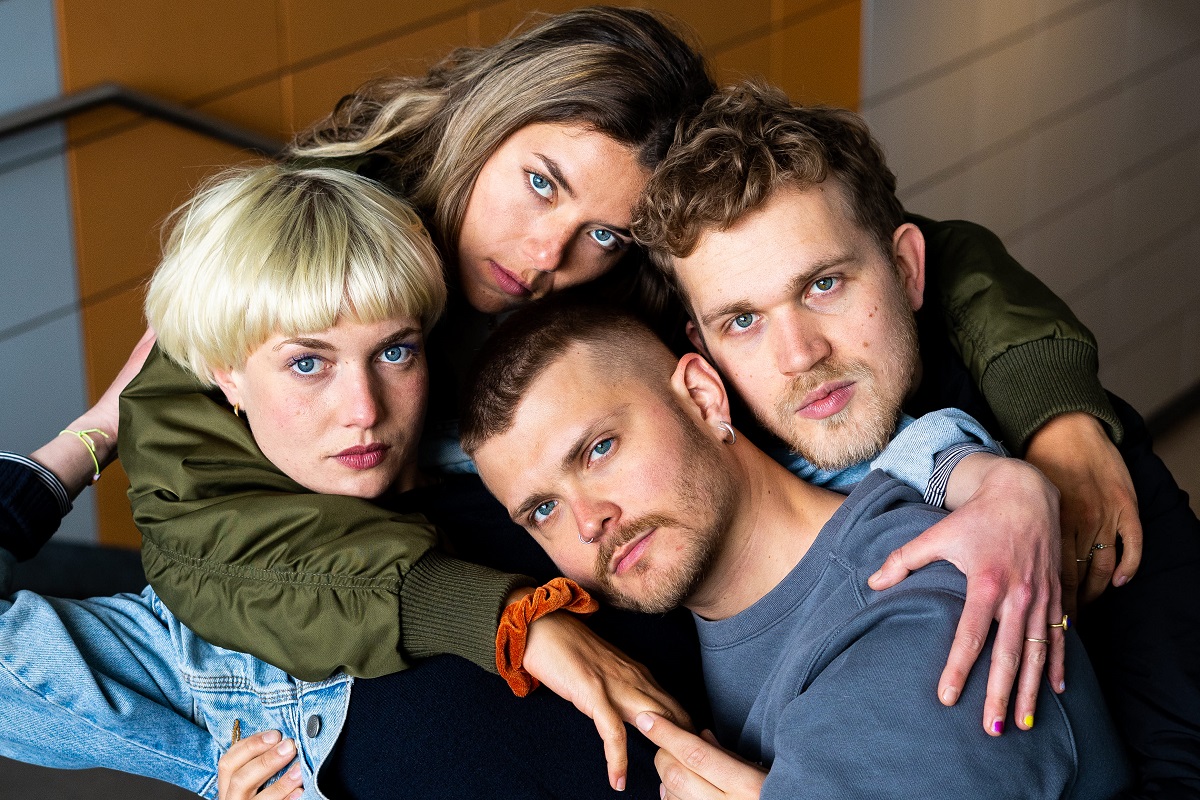 The large-scale production with a chorus of 12, on top of the orchestra of 10 and various soloists, is funded by “Fonds Darstellende Künste aus Mitteln der Beauftraten des Bundesregierung für Kultur und Medien im Rahmen von Neustart Kultur”. I wonder if in a venue such as this it might not be possible, in the future, to present operetta commercially again, as a integrated part of a larger-scale event culture in Berlin. More commercial pressure – like in the days before 1933 – would probably help to fine-tune some aspects of the production, it would also force the creative team to be more inventive when it comes to ‘selling’ their attraction to their rave party goers for more than four performances.

Till that happens, you can see the production again for two performances in August. And, truth be told, it should be brought back after that. Because it’s such joy to be part of Magna Mater and hear the music as interpreted by Schnitzer, May et al. And: Ludwig Obst demonstrating his song of revolution and the famous “Glühwürmchen Idyll,” lying on his back and spreading his legs, is something that needs to be seen to be believed. With bright-voiced Ferdinand Keller as a more than ideal comic side-kick, doing the spread-them choreography too.