The industrial city of Kassel in middle-Germany boasts a modern, superbly designed 900 seat theatre with a large stage and very comfortable seating in which ‘Musiktheater’ and dance are staged. As well as mainstream opera, musicals (this season: Ragtime) and operettas, e.g. Die Großherzogin von Gerolstein. I went to see it on a so called “Theatre Day” when all tickets were priced at 12 Euros! 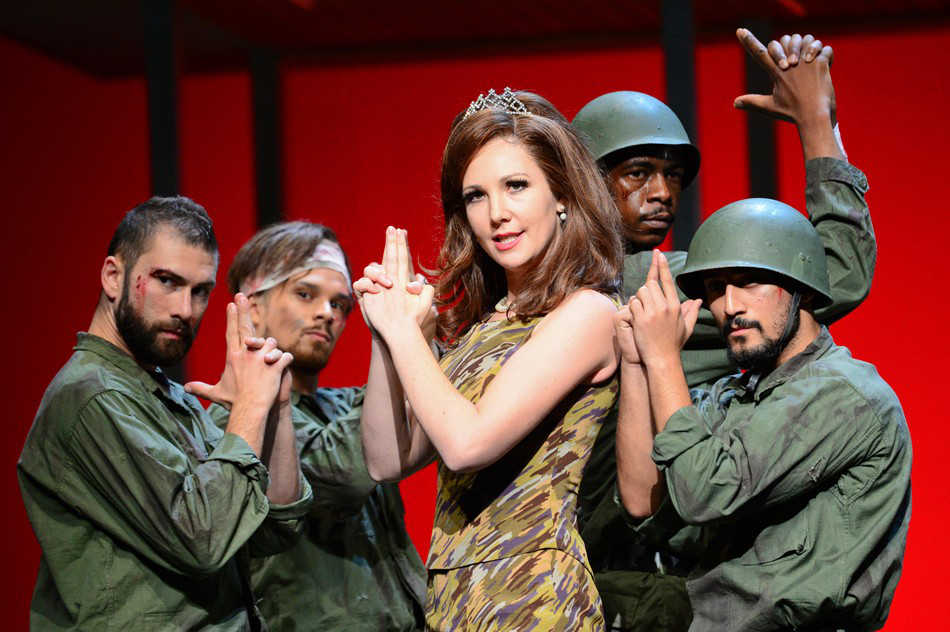 La Grande Duchesse  is one of Offenbach’s best opéra bouffes, with a convoluted Meilhac and Halevy plot that W S Gilbert would have been proud of, here in the witty German language version by Wolfgang Böhmer.  The music is invariably infectious, sometimes charming, always tuneful and well orchestrated.

However, this operetta is not all froth: there is an undercurrent of cynicism about war and politics which is well brought out in this lavish, inventive production by Adriana Altara, reminding us that perhaps we should not be laughing at the antics on stage as much as we do! This is a twenty-first century Gerolstein, ruled over by the Grand Duchess as dictator: she is superbly played at Kassel by Belinda Williams, who just oozes sexuality and smokiness! Not only can she put over all Offenbach’s music with panache, she has tremendous charm as everyone without question does her bidding! 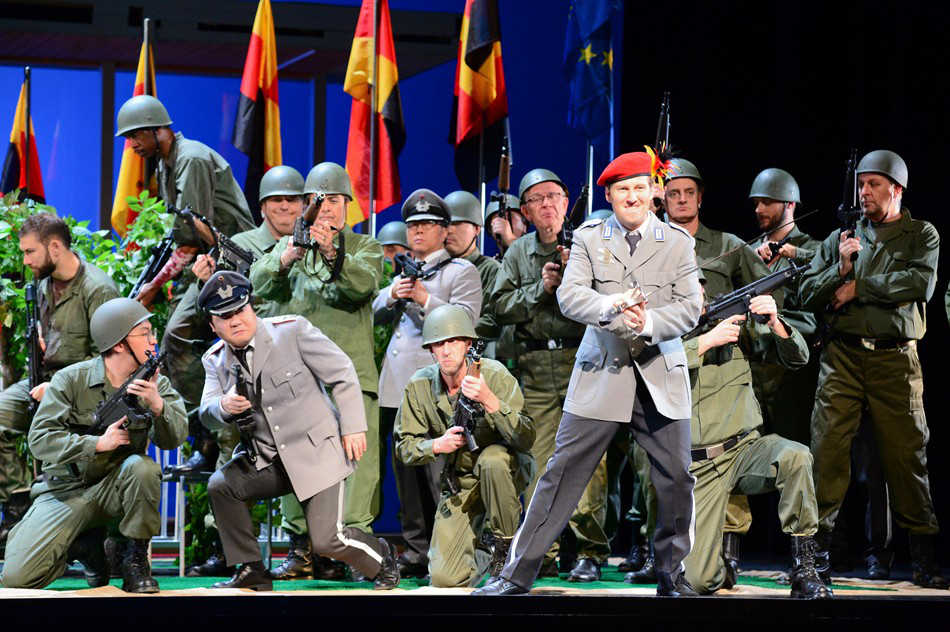 Gideon Poppe as Fritz with the gentlemen of the chorus in Kassel’s “Die Großherzogin von Gerolstein.” (Photo: Nils Klinger)

Almost everyone, I should say, because, even though she raises Fritz from a humble private to General in charge of the army within a few minutes, he refuses to submit to her charms, unlike every other man in the theatre! Johannes An is suitably innocent in this role, with a fine singing voice and acting ability. He, in fact, is head over heels in love with voluptuous Wanda (Jaclin Bermudez), whom of course, after first winning a battle and then losing another, he eventually marries. One feels that The Grand Duchess just ‘moves on’ to her next victim! 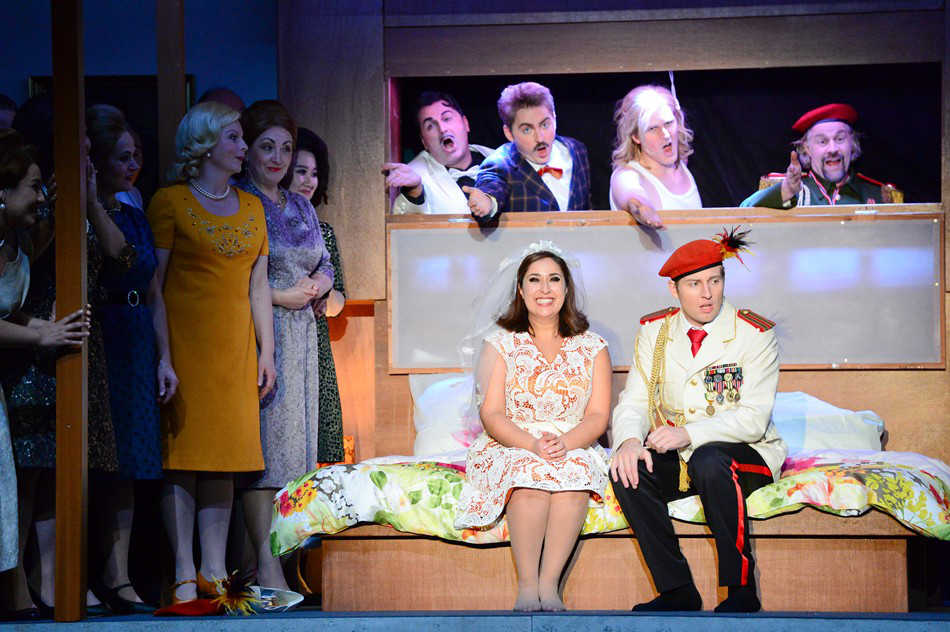 Marc-Olivier Oetterli is General Bumm: totally incompetent of course, but full of his own importance. One of the many highlights of this production is his song ‘A Cheval sur la discipline’ in which the choreography for him and the men’s chorus of twenty is breathtaking. 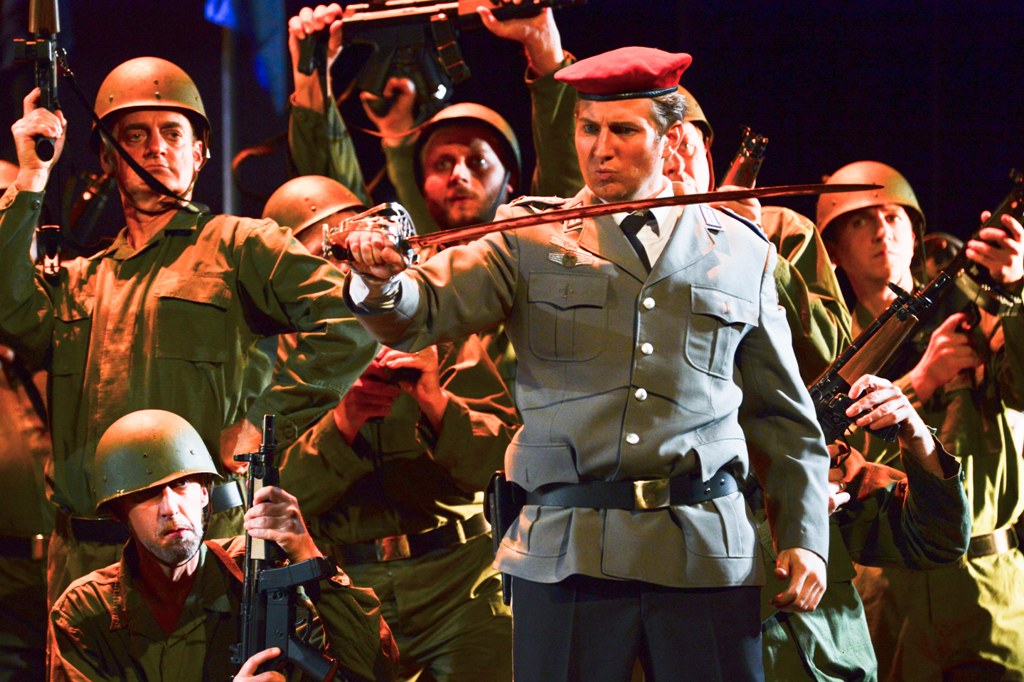 Other accolytes of the Grand Duchess include Tobias Hächler as Prince Paul, whom she eventually marries after Fritz has returned from his unsuccessful second battle in a wheelchair, Daniel Holzhauser as sycophantic Baron Puck and Bernhard Moses as Baron Grog. 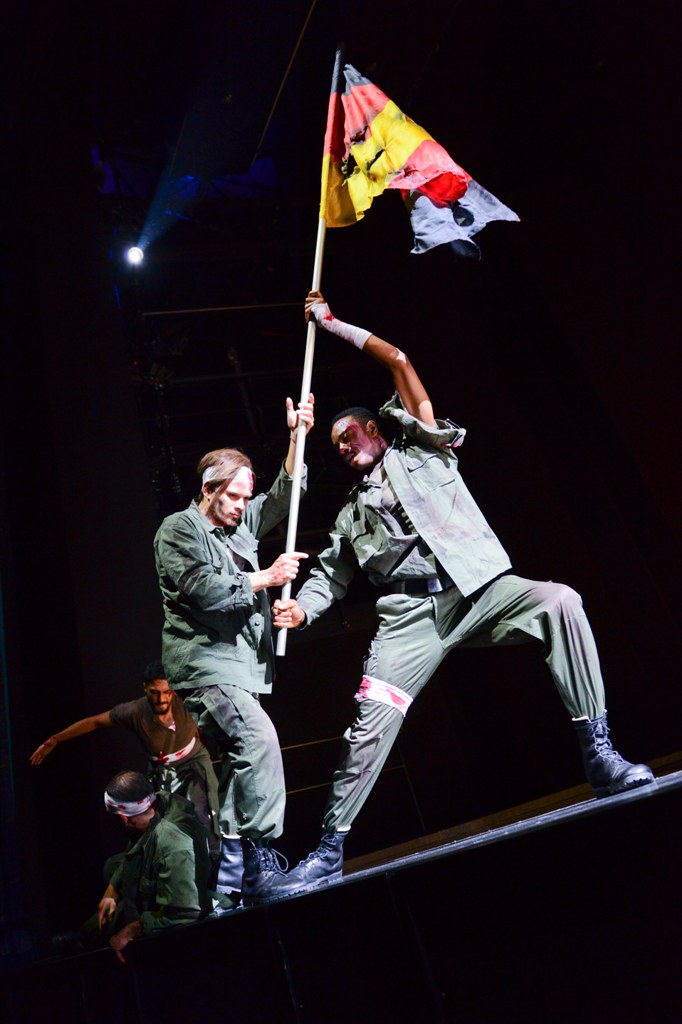 Mention must be made of the movement group (Luca Ghedini, Shafiki Sseggayi and Safat Mistele) who appear to be so wounded in all parts of their bodies that it is surprising they are still alive, let alone dance! In fact the choreography, by Rhys Martin, is imaginative, inventive and always appropriate to the mood of the music. He gets the male chorus, as soldiers, doing moves which they probably never thought possible! 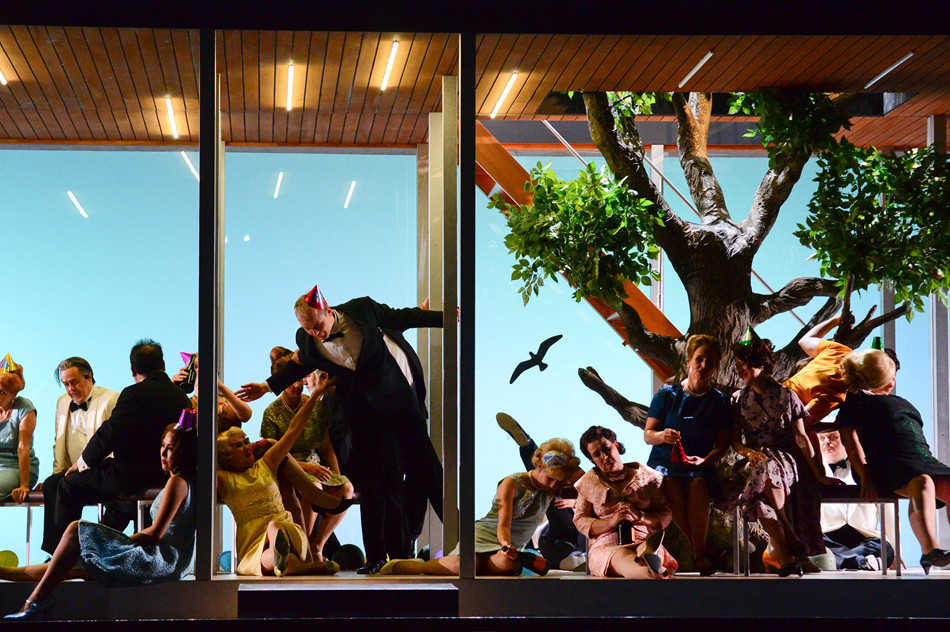 Yashi has designed a twenty first century steel and glass palace, eventually in three floors, which looks suitably sumptuous, and is also responsible for some very humorous costumes. One of the most amusing scenes, as one would expect in an Offenbach operetta, occurs in the bedroom when Fritz and Wanda are trying to get it together, not realising that the entire cast has hidden themselves in various places in and outside the room in order to bid them ‘Bonne Nuit’!

Offenbach’s original orchestrations were stylishly conducted by Xin Tan, even if the first trumpet was having an ‘off’ night!

All in all, a highly enjoyable evening – and I can still picture Belinda Williams’ “Come Up and See Me Sometime” look: totally irresistable! There have been several recordings of La Grande Duchesse, but best of all, for me, even if musically it is not quite complete, is the one with Eugenia Zareska in the title role and a host of French singers, such as Andre Dran and Jean Molien, in support. This was made in the 1950s: all involved sound like French singers used to before all singers sounded the same! and all the music and dialogue is wittily delivered so that even if your knowledge of French is limited it is still amusing! All involved make it into a characterful stage performance. It is conducted with tremendous elan by Rene Leibowitz. (And lets not forget the one-and-only Regine Crespin in her überfamous recording. It’s in a class of its own.)