Yes, it was a good idea to bring back Offenbach’s murderous Barbe-Bleue to Berlin at Komische Oper where, you will recall, Walter Felsenstein staged the most famous production of that piece in 1962. It ran for hundreds of performances until 1992, i.e. until shortly after the Berlin Wall came down. It was filmed by DEFA in 1973 and is easily available on DVD, also on YouTube. The Felsentein production went on tour, as far as Japan, so many people worldwide have seen Hanns Nocker as Ritter Blaubart and Werner Enders as the spookiest King Bobèche imaginable. Since 1992 this Offenbach title wasn’t played in Berlin, not even at one of the city’s other two opera houses. Now, celebrating the 70th birthday of Komische Oper, artistic director Barrie Kosky presents a new Blaubart [not “Ritter Blaubart” anymore] for which he managed to hire renowned opera director Stefan Herheim – who promised a “through-sexualized operetta” production. The opening night had to be postponed because of technical problems; but now the delayed premiere was streamed live and is available on OperaVision until 16 September. 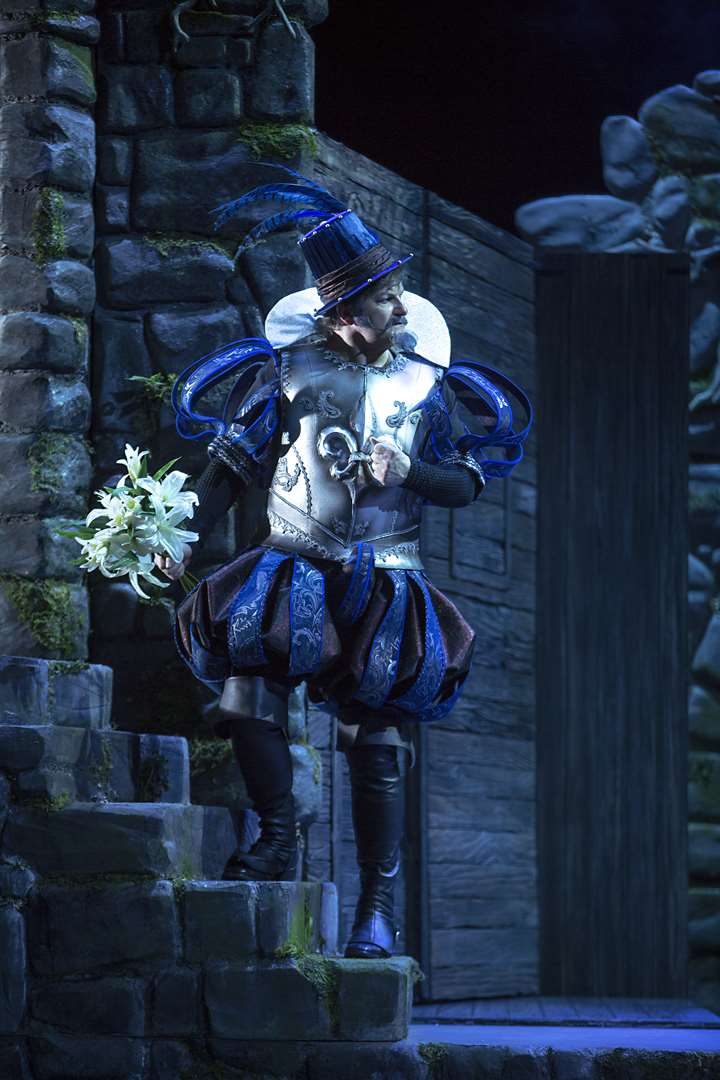 Kurt Gänzl writes of Barbe-Bleue that is has its fun “at the expense of the pastoral and féerie conventions.” That’s one way of looking at it, and if you judge by the photos of the new production and the way it looks on live stream there are many pastoral and féerie elements in Herheim’s visually attractive staging with opulent sets by Christof Hetzer and costumes by Esther Bialas, with atmospheric lightning by Phoenix (Andreas Hofer).

Another way of looking at Blaubart is the “black comedy” and “burlesque” mixed with a story of female empowerment: the simple (but sexy) farm girl Boulotte overthrows male supremacy. And she does so in Meilhac and Halévy’s opéra bouffe by establishing her right to express her own lust any which way she likes, and by getting back to her pompous self-enamored husband Bluebeard after he decides to kill her because he’s bored and wants to marry someone new. Boulotte is not a women you can simply cast aside, and she plans a revenge that is worthy of any Marvel Comics heroine. Which leads to a gloriously grotesque Offenbach happy-end. 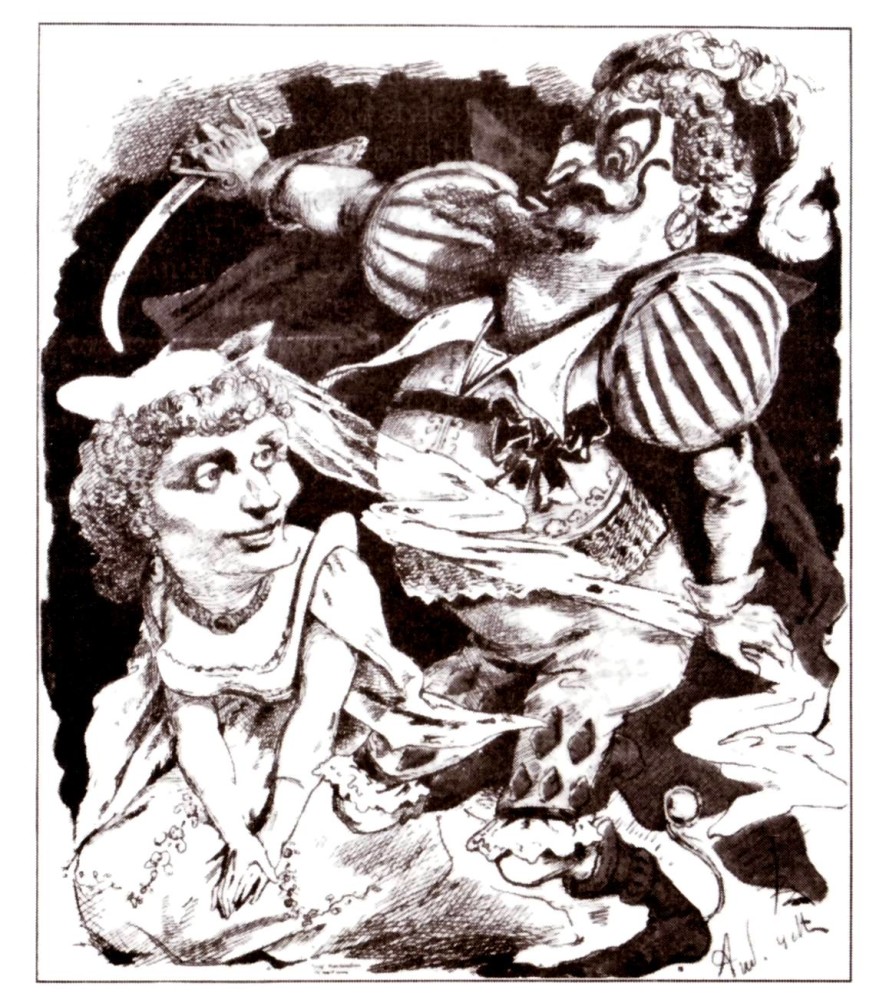 According to the playbill, this production is based on the critical Offenbach-Edition Keck. You would not guess so because a great deal of music has been moved around (and added) by Herheim and his assistants Clemens Flick and Alexander Meier-Dörzenbach. The famous overture is gone, and with it the mock medieval scene-setting. Instead, there is a thunder-and-lightening-prologue featuring ‘Death’ (Wolfgang Häntsch) and ‘Cupid’ (Rüdiger Frank). The two actors are highly expressive and interesting to watch as they cart in a wooden stage that is labeled “Varieté Vanitas.” From this mobile stage the entire fairy tale story evolves. With endless exchanges about love and death, Eros und Thanatos. Some of it is amusing, because Häntsch and Frank are amusing. But their never-ending dialogue has little (or nothing) to do with Offenbach, Meilhac and Halévy. And at some point it becomes tiresome. 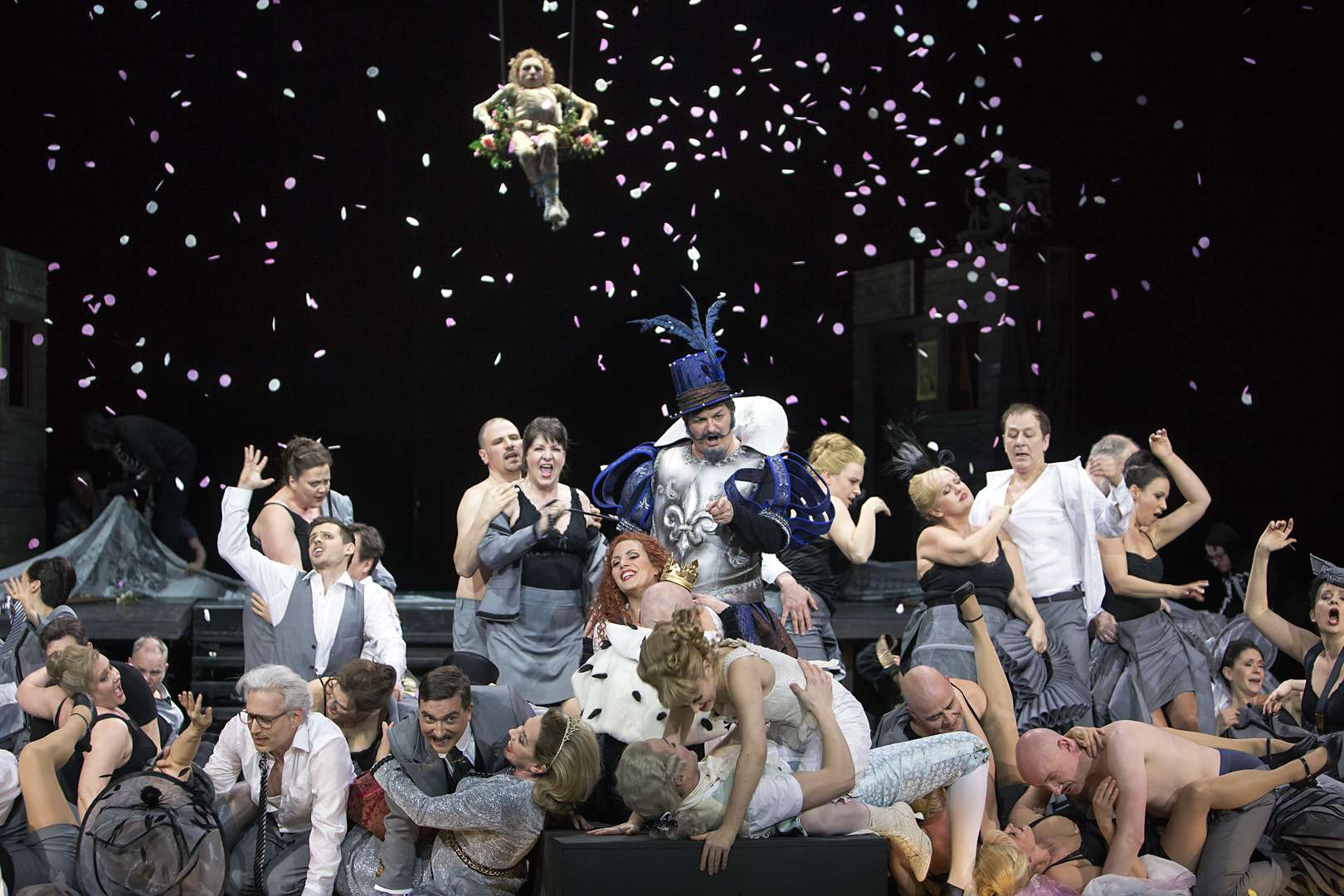 Compared with other successful operetta productions at Komische Oper the casting here is different, you could say: it’s conventional. Instead of using singing actors and actresses that fill the stage with unique personality and magnetism, and that can do so much more than just produce pretty sounds, you get standard opera singers in all the lead roles who ‘pretend’ to be characters, but never truly get into their roles.

Wolfgang Ablinger-Sperrhacke as the title hero manages best to turn himself into a comical melodrama villain, with a blue chin beard, and he has an interesting voice. Still, in the famous opening song (“Je suis Barbe-Bleue, o gué”) he gets lost in the quick refrain that’s obviously too quick for him. And as grotesque as he sometimes is, Ablinger-Sperrhacke pays no attention to the various funny asides of the role, for example when Barbe-Bleue asks Boulotte in his torture chamber whether she’s hurt herself stumbling – when he’s about to kill her a second later. It’s a glorious detail in the Felsenstein production, and it’s in the original script, too. Here, it’s gone.

Sarah Ferede as Boulotte has a grand mezzo voice to offer, ringing high notes, easy low notes. And she looks good with long red curly hair, signaling voluptuousness. But there is hardly any fun in her performance. When Boulotte/Ferede comes in – chasing shepherd Daphnis as the object of her desire – that entrance is really no match for Dagmar Manzel as Cleopatra stepping out of her sarcophagus. And I have to admit that after the Manzel extravaganza I have great difficulty going back to this old fashioned run-of-the-mill operetta performance by opera singers; the operetta world has moved on, especially in Berlin, and it should continue moving forwards, not backwards. Certainly a role such as Boulotte – created by the incomparable Hortense Schneider in 1866 – needs more than a pretty mezzo soprano. It needs over-the-top personality, above all else. And that’s missing here, no matter how far apart Sarah Ferede spreads her legs in the act 2 orgy finale, offering the chorus and ensemble a clear view of “The Origin of the World.” A scene like that should have more “originality,” and anyone who has seen Desirée Nick show audiences her public hair knows that such originality in song and gesture is possible; at least in Berlin. (The song in question was an adaptation of Oscar Straus’ “Warum soll eine Frau kein Verhältnis haben?” to “Warum soll eine Frau keine Schamhaare haben, können Sie mir das sagen, warum?”)

Peter Renz as King Bobèche is costumed like Werner Enders back in the Felsenstein days, but instead of deconstructing this dangerous monarch by turning him into a crazy Hitler-lookalike jumping around on an artificial globe – on a Charlie Chalpin level of full-blown comedy – Bobèche is now reduced to some harmless prancing around with McDonald’s signs on his black bodice. I wasn’t loving it.

The two killer assistants, Count Oscar and alchemist Popolani, were excellently cast with Philipp Meierhöfer and Tom Erik Lie. They demonstrated a vocal and acting style that would have befitted the others too. And Philipp Meierhöfer (who was a bit bland recently in Märchen im Grand-Hotel) really rocked as the wicked courtier advising the other courtiers to kiss ass in order to get ahead in this world. It was a grand Offenbach moment, even if the new German translation was borderline vulgar. (Mr. Meierhöfer knew how to sell this with panache anyway.) 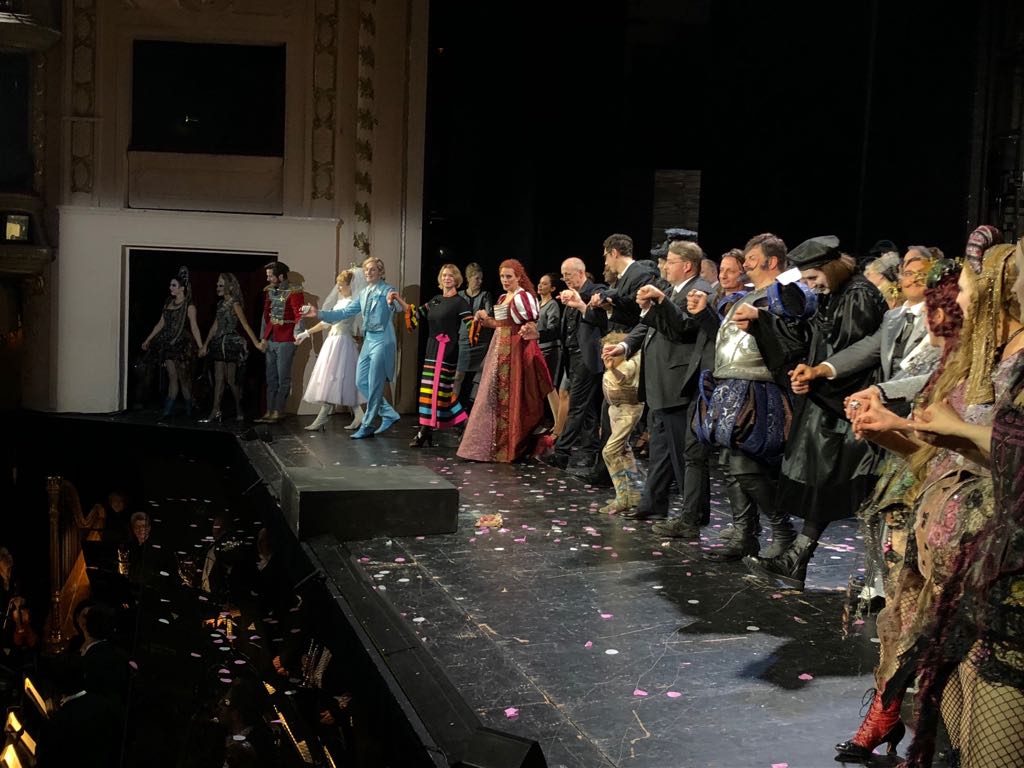 There also was the wonderful tenor Johannes Dunz as Daphnis/Prince Saphir: with blond curls. Dunz brought some of the magic he acquired as Prince Beladonis in Die Perlen der Cleopatra to this show. But it seems that Stefan Herheim was not interested in developing this any further. He left Dunz and Vera-Lotte Böcker to some banal jumping around as Daphnis and Fleurette, mishandling the flowers in their cottage garden. There surely is more to that subplot … and there is defintely more to Mr. Dunz!

With a fundamental different type of casting the promised “through-sexualized” reading of Barbe-Bleue might have worked. It’s an interpretation that the dramaturg Alexander Meier-Dörzenbach maps out expansively in the program booklet, with references to L’Origine du monde (1866) by Gustave Courbet and Olympia by Manet (1863). 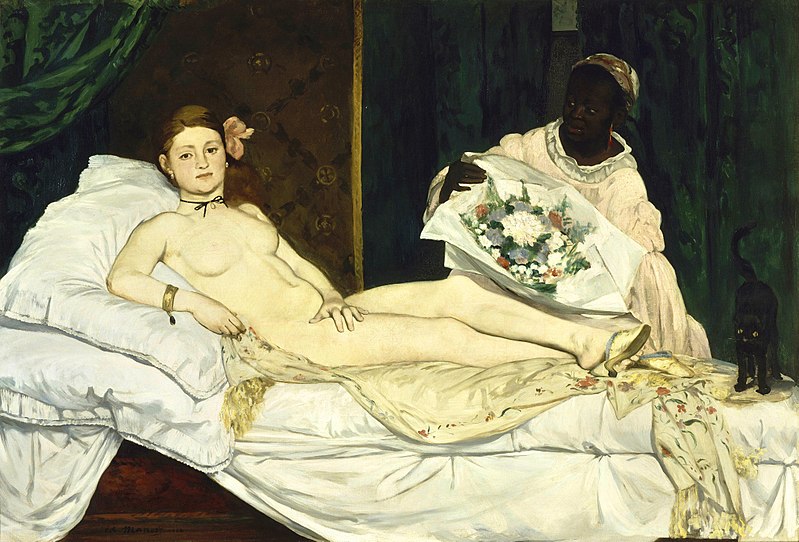 Edouard Manet’s “Olympia” (1863) presenting herself nude and unashamed to her customers.

Needless to say, I find this aspect of Barbe-Bleue and Offenbach more than worthwhile. Especially since Mr. Meier-Dörzenbach quotes me backwards and forwards in his essay without ever saying where his quotes come from. But that’s a different story. As Diana Vreeland once said: “If you’re not copied, you’re nobody. Let them copy, let them steal. There’s no such thing as originality.” (Wise words.)

The Feminist Side of the Show

But the pseudo-sexy acting and gesturing of Sarah Ferede only hints at what is meant by Meier-Dörzenbach when he talks about “the death of love” and “the secret [sexual] key to all things.” It’s no more than a hint in Herheim’s staging, or the gymnastics he has his ladies do (with a banana dildo to re-vive them from the dead), and that’s really too little for a show like Offenbach’s Barbe-Bleue. The revolutionary aspect and the feminist side of the piece – in our age of #metoo – is seriously underplayed. And this includes the riotous parody of Catholic church morals: that you have to marry a girl before you get her into bed, only to kill her if you wish to bed the next one. Better be a murderer than commit a sexual sin!

As last minute replacement-conductor for Clemens Flick, Stefan Soltesz made the music or this re-arranggement of the music sound pretty amazing. It’s a pity Soltesz didn’t get to perform the actual Offenbach-Edition Keck, including the overture. Because the darker sides of the score were superbly played by the orchestra of the Komische Oper Berlin. Some of the instrumental effects were knock-outs. 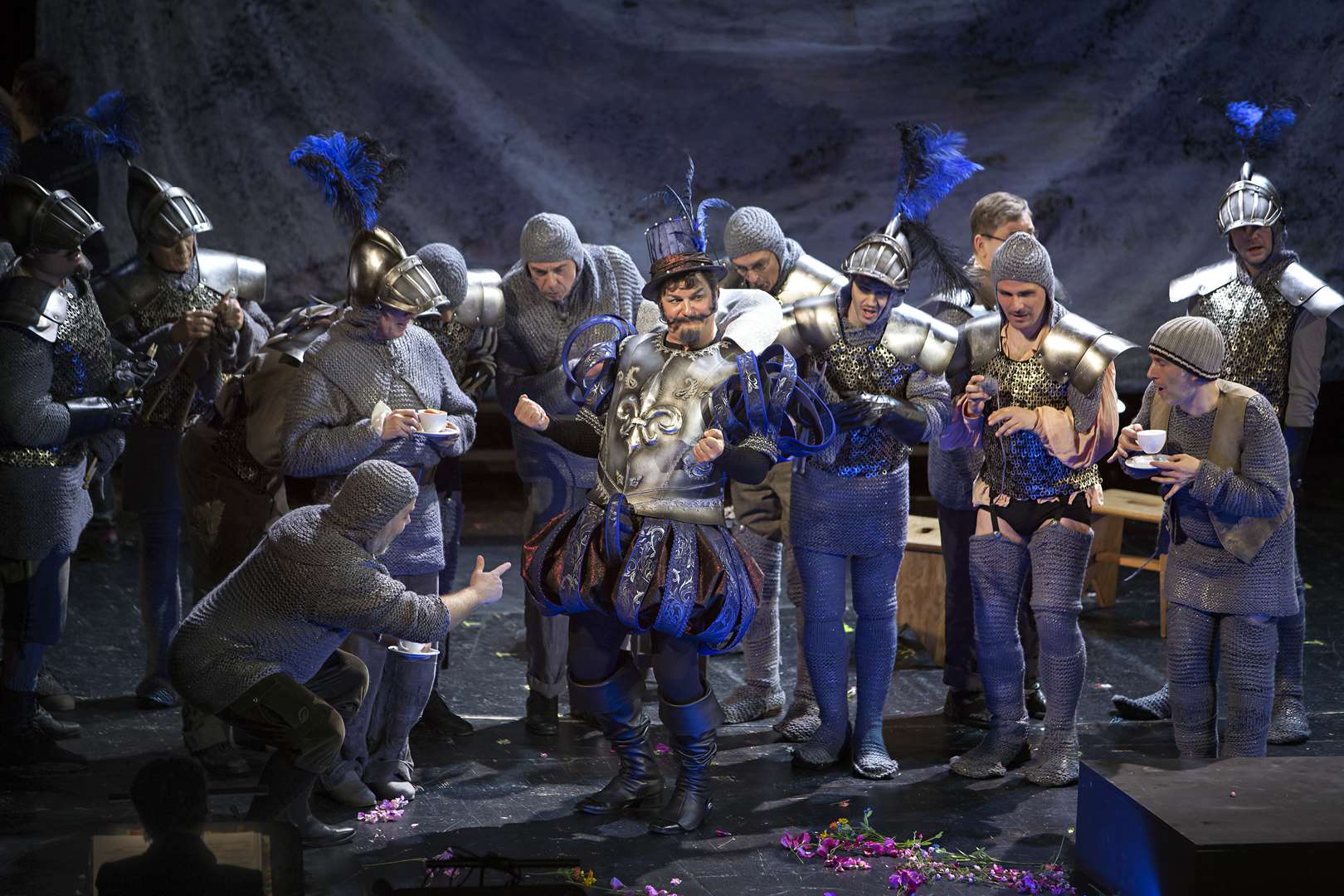 Bluebeard and his men, camping it up in “Blaubart” at Komische Oper Berlin. (Photo: Iko Freese / drama-berlin.de)

But Stefan Herheim doesn’t trust Offenbach and his music and the splendid instrumental effects. He wants to deconstruct everything, tell the story about the story, and he wants to add as many extra layers of meaning as possible. While there’s nothing wrong with extra layers, they become a problem when the actual piece disappears from sight. And when ‘Death’ stops the gallop in finale 1 to tell the audience that ‘entertainment’ and such ‘operetta tralala’ is highly problematic (“Don’t you know where such entertainment leads to…..? This sort of theater is dead!”) you realize that Herheim isn’t comfortable with operetta per se.

Considering the history of Offenbach in Nazi Germany after 1933, it’s unsettling to hear such lines about mishandled entertainment and to see Offenbach put into the same box as the political propaganda pieces that Goebbels prescribed. I kept waiting for Herheim (and his two philosophizing actors) to get back to this point and set the matter straight. But they never do… which makes it understandable that a friend of mine, very much involved in Jewish politics and culture, left the performance during the interval and posted on Facebook that he was ‘appalled.’ 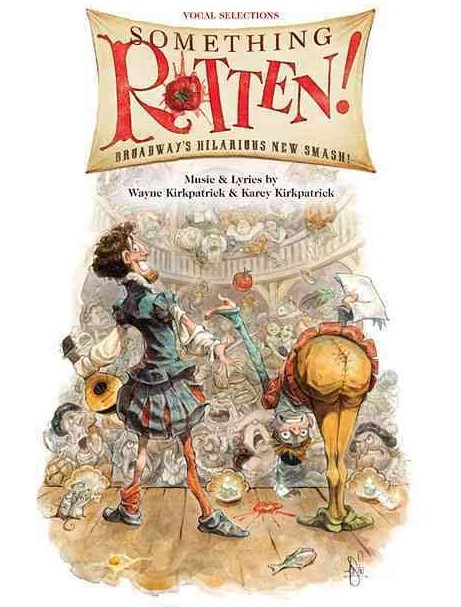 Cover of the vocal selections for the Shakespeare musical “Something Rotten!” that uses simular visuals as Stefan Herheim in “Blaubart.”

The best moments in the production were (for me) those that clearly referenced Felsenstein – in the costuming of Blaubart and Bobèche for example – but the new staging rarely develops its own unique qualities. Visually, it’s all a camp romp like Something Rotten and Spamalot, without ever quite reaching the heights of comedy madness these shows achieve(d). It would be interesting to see the novel Blaubart with the likes of Christian Borle or Hank Azaria as Bluebeard, Tim Curry as Bobèche or Sara Ramirez as Boulotte. If it ever transfers to Broadway … maybe! 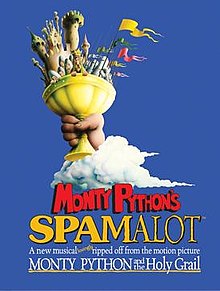 The poster for the Monty Python musical “Spamalot.”

You can watch the full Herheim production of Blaubart online, with English and German subtitles. And notwithstanding my reservations, it’s good to see the show and to see/hear it live in Berlin. If there hadn’t been such spectacular operetta performers and productions recently in this city, I might have had an easier time with the old fashioned Herheim approach. But it clearly looks attractive online as filmed by the OperaVision team. And the sound quality is excellent, too. (Compliments to everyone involved.)

Interestingly, Barbe-Bleue is currently en vogue as never before. The Budapest Operetta Theater presented a new staging a month ago, Cottbus and Karlsruhe had new Ritter Blaubart productions recently. And the Opéra in Lyon is doing a new Barbe-Bleue next season, directed by Laurent Pelly. So stay tuned.