The Austrian newspaper Der Standard has added a forgotten film operetta to their DVD series “Der österreichische Film”, a movie made by Max Neufeld in 1932 based on a script by Karl Farkas, Emmerich Pressburger and Irma von Cuba, and with snappy music by Richard Fall, brother of Leo. The title? Sehnsucht 202, which refers to the number of a contact ad that causes chaos in the lives and hearts of four young Viennese citizens, played by soon-to-be superstar Louise Rainer (The Great Ziegfeld), Magda Schneider (mother of you-know-who), Fritz Schulz (who played the gay love interest in Anders als die andern) and Rolf von Goth (of Metropolis fame). It doesn’t get much better than this. And there’s a surpringly queer twist as well.

While Erik Charell turned “Vienna” into upbeat nostalgia in his successful “Tonfilmoperette” Der Kongress tanzt a year earlier, filmed in Berlin for UFA with Lilian Harvey and Willy Fritsch in the lead roles – with the queer element of the double identity of the Tsar of Russia at the Congress of Vienna, who breaks free to be who he really wants to be –, the city we see in Sehnsucht 202 isn’t nostalgically tinted, but very up-to-date. I.e. we see a contemporary 1932 Vienna with modern architecture and jazz bars where modern bands play with stuffed trumpets instead of violins soaring to create a Johann Strauss memorial service. 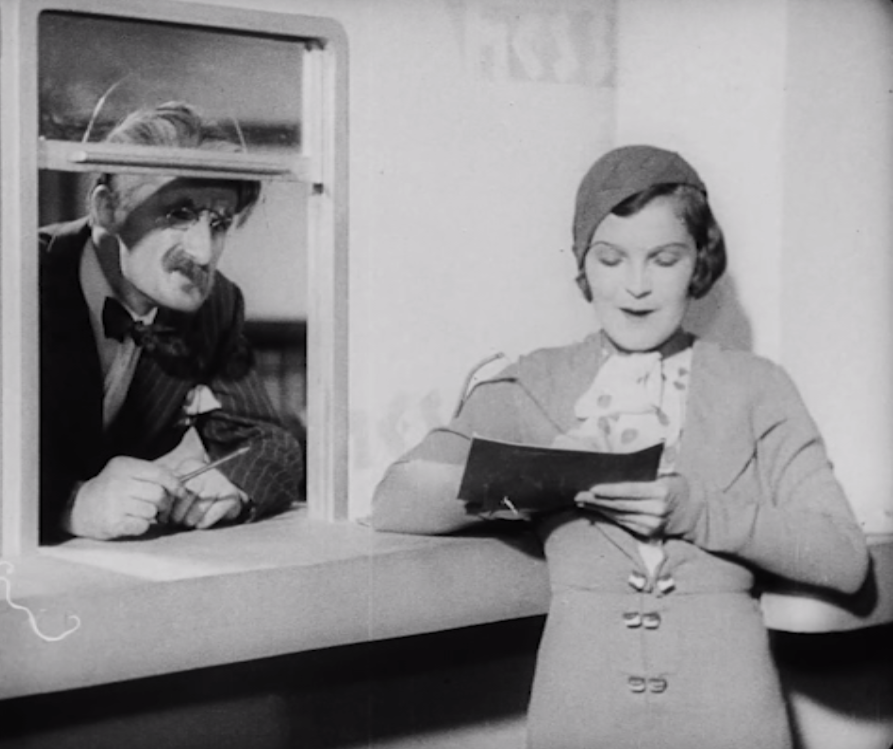 Of course this modern “Vienna” we see is an idealized version too, a fantasy world in which young unemployed ladies can find a job via a personal contact ad, which is also the format carefree millionaires use to find worthwhile projects to invest their fortune in. That’s the starting point of the grand musical opening scene: Magda (Schneider), the poor unemployed girl-next-door, and Kitty (Rainer), the rich lady with too much money at hand, both place a contact ad, and these two very different ads get mixed up by mistake. As a result, interested parties suddenly read “LADY WITH A FORTUNE OF MILLIONS: Young intelligent girl seeks position of any kind.” 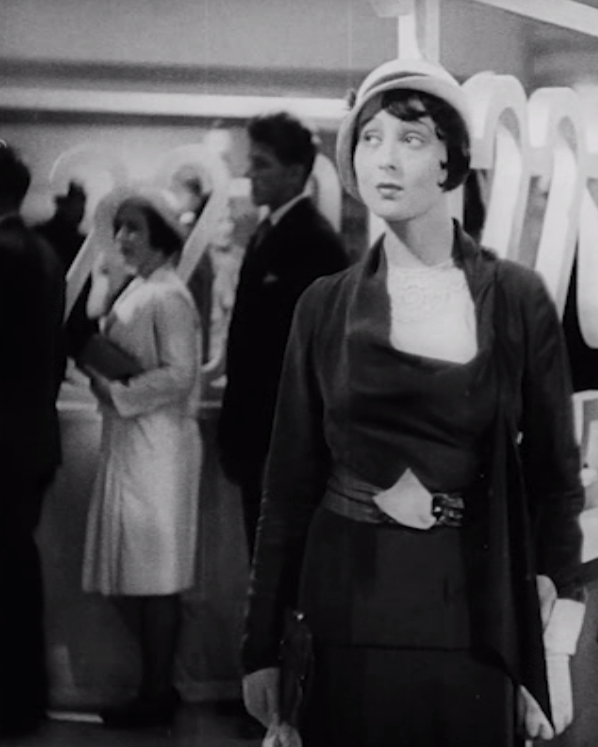 Not surprisingly, there’s a flood of letters coming in, all of them end up in a trash can, except one. It’s written by two young and attractive men-about-town called Harry (von Goth) and Bobby (Schulz). They share a bedroom and own an elegant perfume store together in the center of Vienna. But that store is not making any profit, even though it’s remarkably stylish. And it has an ultra-camp shop assistant named “Silber”, played as a true “Nance Character” by the incomparable comedian Paul Kemp. Bobby and Harry invite Magda over immediately, thinking she’d bring along her millions and invest them in their failing business enterprise. While Kitty meets Bobby by accident who then follows her all over the place singing “Mein Schatz, ich bin in Dein Parfüm verliebt” (“Sweetheart, I’m in Love With Your Perfume”). Modern #metoo campaigners would have a field day analyzing this scene, especially when a whole army of young men joins Bobby in his rather ostentatious pursuit of Kitty. But Miss Rainer as Kitty is never threatened by such admirers, she shakes them off and takes aim herself – seducing Bobby without knowing that he has employed the other half of the “Sehnsucht 202” contact ad. That other half, i.e. Magda, falls madly in love with Harry. And Silber teaches her the ins and outs of serving gentleman callers. 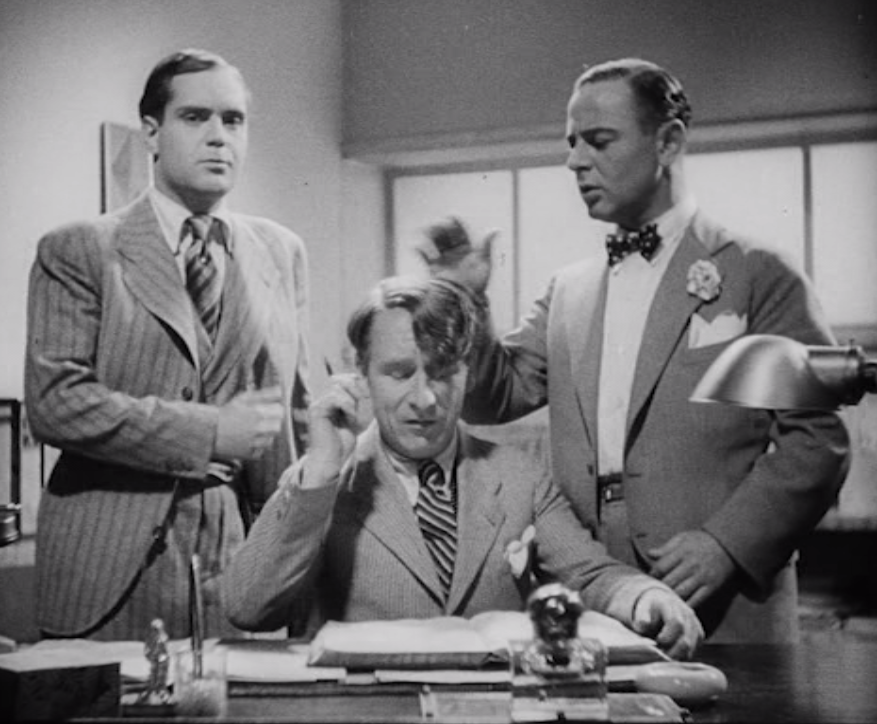 As the story moves along there are scenes that remind us, strikingly, of later classic movie moments. For example, when Magda decides to do something about the lack of costumers in “her” shop she redecorates the window. While doing so a ventilator blows up her dress, and the entire male population of Vienna stops in front of the shop to look at her stockings and underpants. They then storm into the shop to buy, and buy, and buy perfume. It’s a magical moment, and one wonders if Billy Wilder saw it and copied it for his Marilyn Monroe scene in The Seven Year Itch? (The joke here is that Silber then has to attend to the gentlemen, because Madga is called away, which leads to some very funny “complications”.) 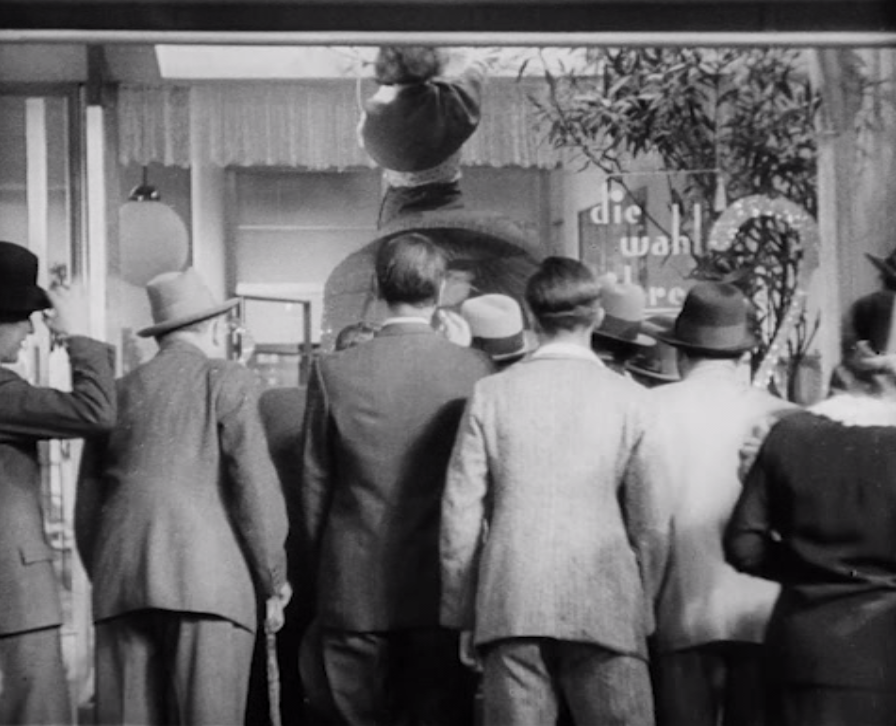 The famous skirt scene from “Sehnsucht 202.” Was it the role model for Billy Wilder’s “Seven Year Itch”? (Photo: Screenshot)

Later, there’s a scene where Bobby is left standing on the street, in front of a fancy dance bar Moulin Rouge, and it suddenly starts pouring. He turns his coat collar up and sings – 20 years before Gene Kelly does the same thing in Singing in the Rain. 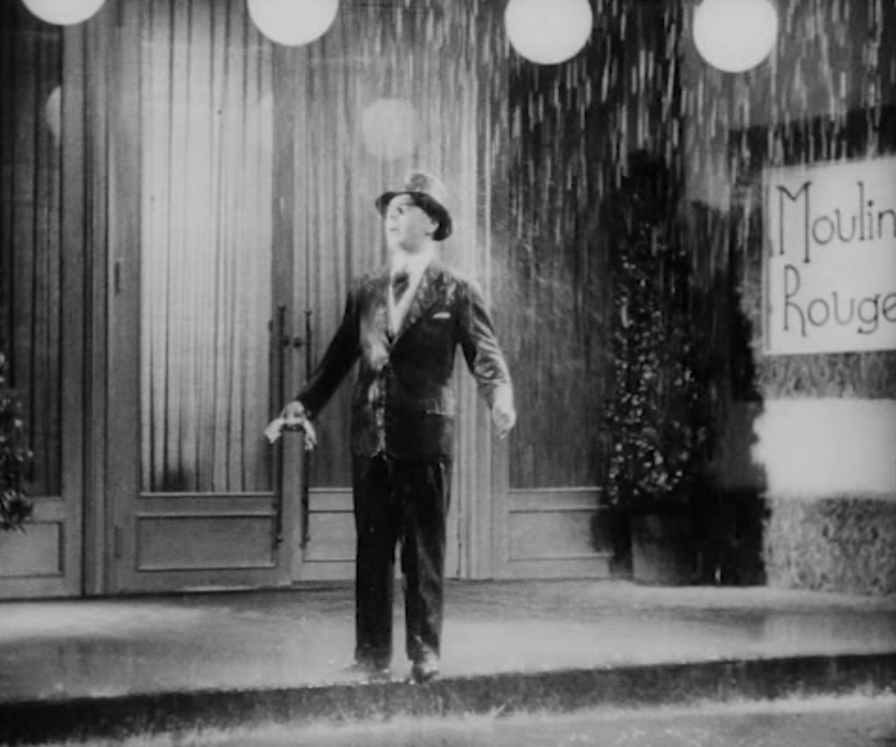 Fritz Schulz as Bobby doing a “Singing in the Rain” scene. (Photo: Screenshot)

We never find out what the exact relationship between Bobby and Harry is, who sleep side by side in matching striped pajamas and perform some rather flamboyant song and dance routines over breakfast. Bobby is cast with the actor who played the young violin student Kurt Sievers in Richard Oswald’s ground-breaking Anders als die andern, the first movie ever to address the topic of homosexuality, criminalization of homosexuality, social outcasting of homosexuals and forced suicide of homosexuals in 1919. It gives Sehnsucht 202 an extra poignancy and allows the viewer to speculate. 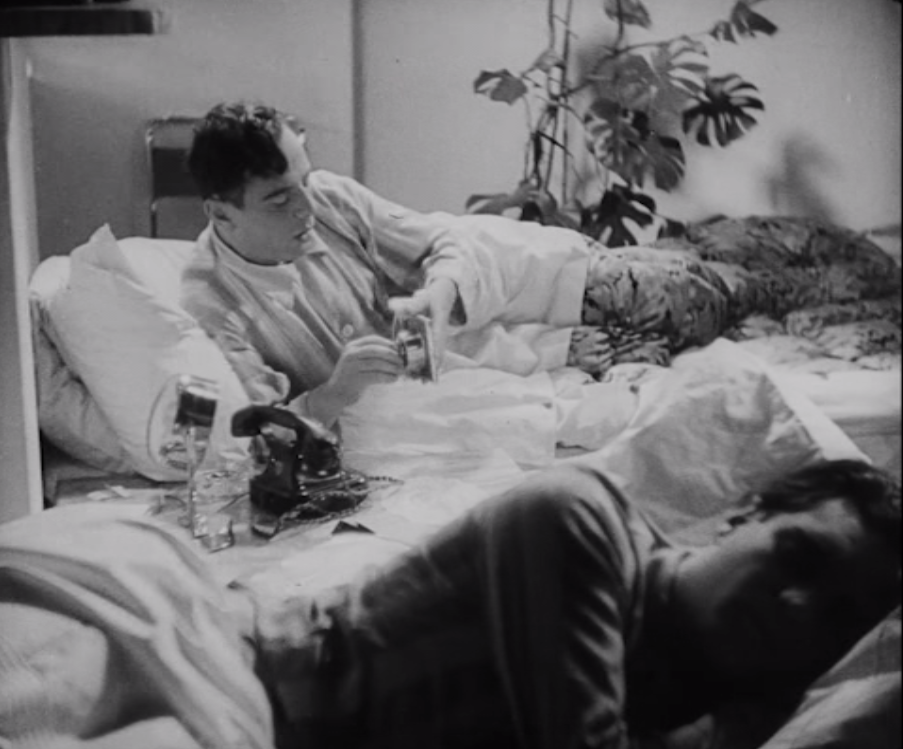 Colleagues and friends: Bobby and Harry in bed together in “Sehnsucht 202.” (Photo: Screenshot)

In the early 1930s Richard Oswald himself had left his early “sozialhygienische Filme” behind and was busy with operetta film projects, among them Gräfin Mariza with Hubert Marischka, or Viktoria und ihr Husar, or Die Blume von Hawaii with Marta Eggerth. None of these movies have been restored and released on DVD. Perhaps Der Standard can change that with their continuing series? 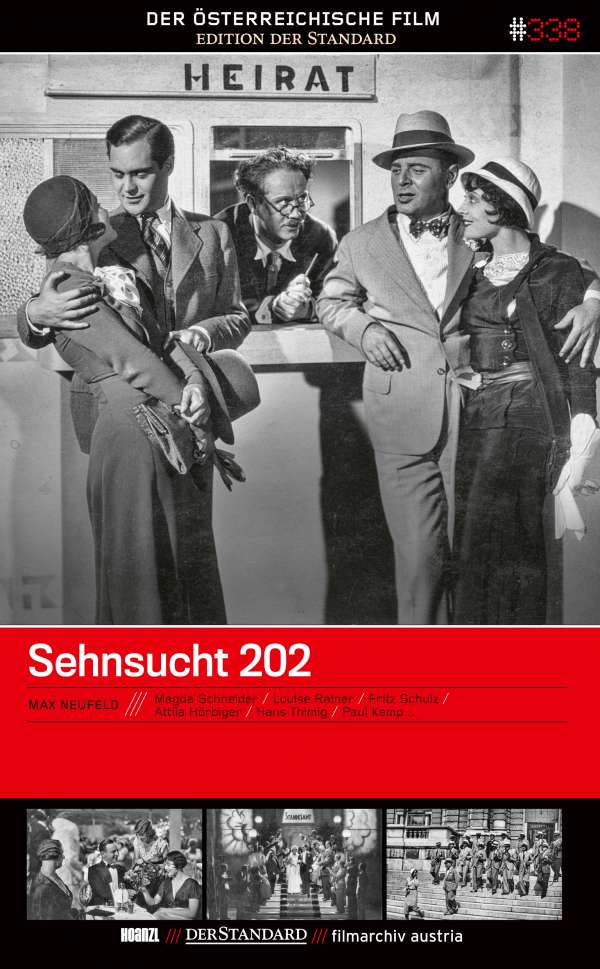 Of course there’s a happy end in Sehnsucht 202, after all it was a typical “feel good” movie in times of depression. It’s not as polished as the various better known UFA products, like Die Drei von der Tankstelle or Ein blonder Traum. And Richard Fall’s music is never as immediately memorable as Werner Richard Heymann’s songs for the UFA products from Berlin. But brother Fall knows how to write bouncy numbers with syncopations, and he also knows how to include a proper Viennese waltz without making it sound schmaltzy. (I wish Jonas Kaufman had watched and listened to this movie before recording his album Vienna.)

In short, this is a fun film, and it’s the screen equivalent to various stage operetta formats of the time which tried to capture a contemporary flair with contemporary music, such as Benatzky’s Meine Schwester und ich (1930) or Bezauberndes Fräulein (1933), not to mention Die Wunder-Bar (1930), which was later turned into The Wonder Bar (1934) with Al Jolson in the lead.

These experiments of what is known as “musical comedy” in the USA were stopped short by the Nazis in Germany who turned the operetta clocks backwards and had Willi Forst present their ideal “Vienna” in films such as Operette (1940) and Wiener Blut (1942). The Vienna celebrated there is as far removed as possible from the one seen in Sehnsucht 202. If at all, the “contemporary” style of Sehnsucht 202 lives on in Nazi classics such as Wir machen Musik (1942), but without that irresitable queer touch.

In an extensive essay for Neue Musikzeitung (nmz) Viktor Rotthaler explains who is who in Sehnsucht 202 and what became of all the artists after 1933. In the DVD edition itself Florian Widegger from Filmarchiv Austria gives us the background information and a biographical sketch of director Max Neufeld.

Sadly, the DVD does not have English langue subtitles. Which really is a shame. But it shouldn’t stop you from watching it.

It’s definitely more fun than Jonas Kaufmann’s Vienna. And let’s not even start talking about his Mariah Carey impersonation in “All I Want for Christmas” which is stylistically as “off” as his Viennese operetta attempts. (The only difference is that most people will know what Mariah Carey should sound like, which – sadly – they don’t when it comes to operetta.)