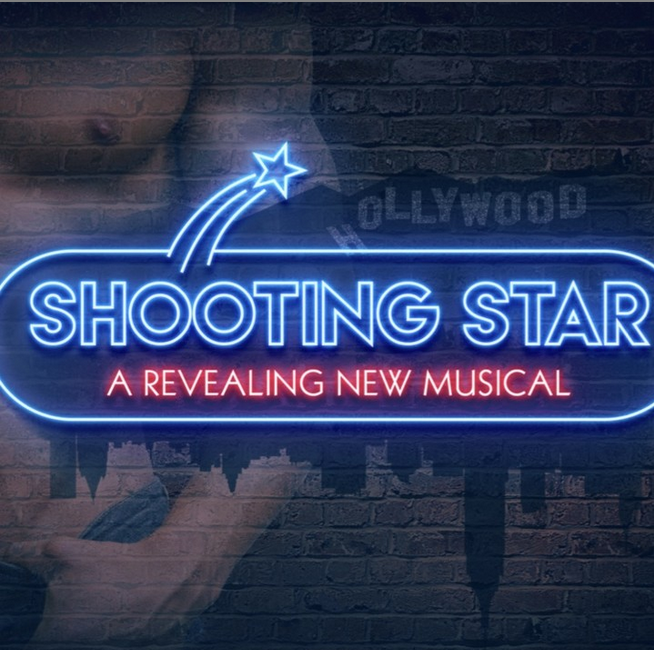 The poster design for “Shooting Star” in Los Angeles. 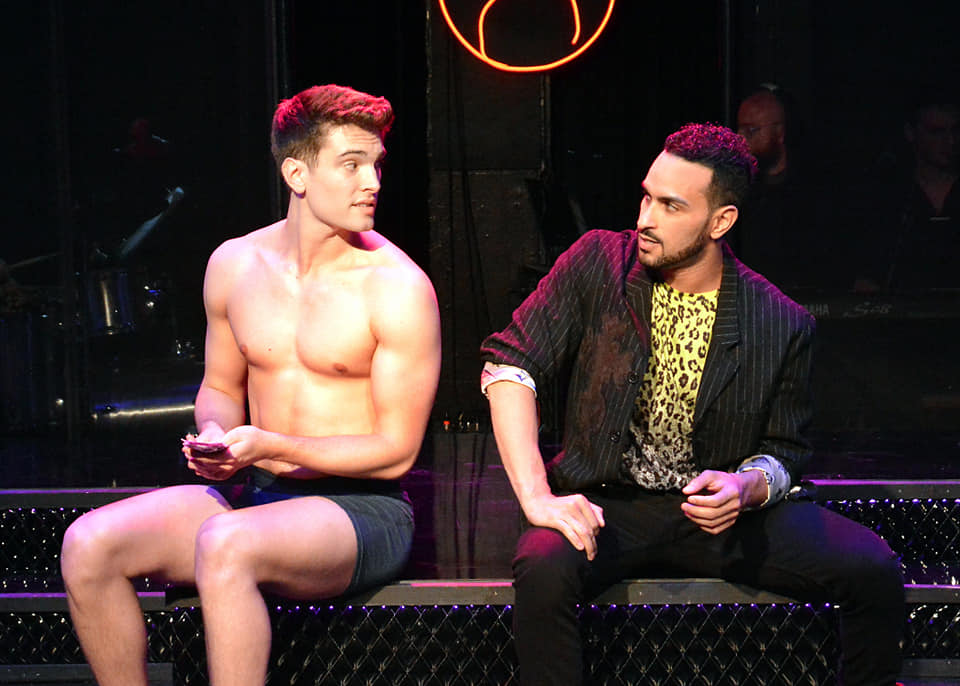 Seeing the handsome and endearing Mr. Nadalini fully exposed creates a highly uncomfortable, even disturbing effect – it displays the boy-next-door-character like a piece of raw meat, and it forces the viewer to consider his/her reaction(s). It’s a balancing act, a provocation and stimulation, a slap in the face and incredibly arousing, all at the same time. It makes me wonder if that’s how Nana’s audience might have reacted back in the Parisian opéra-bouffe days of the 1860s and 70s?

As in Nana, the main character in Shooting Star is dreaming of a career in the spotlight – with adoring fans and big pay checks. His career is the way out of provincial life. And just as Nana cannot quite manage to make it onto the “respectable” stages of Paris, Shooting Star’s Taylor Trent’s dream of a “legit” film career in Hollywood doesn’t quite happen. So he chooses an alternative path that runs parallel to the “real” world, and that is a copy of this “real” world, just like the demi-monde world was, so strongly associated with Offenbach. It’s a world many don’t wish to acknowledge or talk about publicly. Even though everyone consumes it, admires it, lusts after it, but feels slightly ashamed of. Even in this day and age.

I shared my ideas about “The Birth of Operetta from the Spirit of Pornography” with a famous operetta researcher recently and got much inspired feedback. But when I asked him if he fancied writing something about the topic himself he declined, saying it would ruin his reputation as a serious theater historian. Notwithstanding the fact that Linda Williams published her book Hardcore as far back as 1989, opening academia for porn research and teaching at Berkeley University. In 2013 Elizabeth Wollman published Hard Times: The Adult Musical in 1970s New York City with Oxford University Press without ruining her reputation. She states: “Most [of these adult musicals] were meant to comment on the sociosexual mores of the time: to criticize them, praise them, educate audiences about them, spoof them, and capitalize on them.” 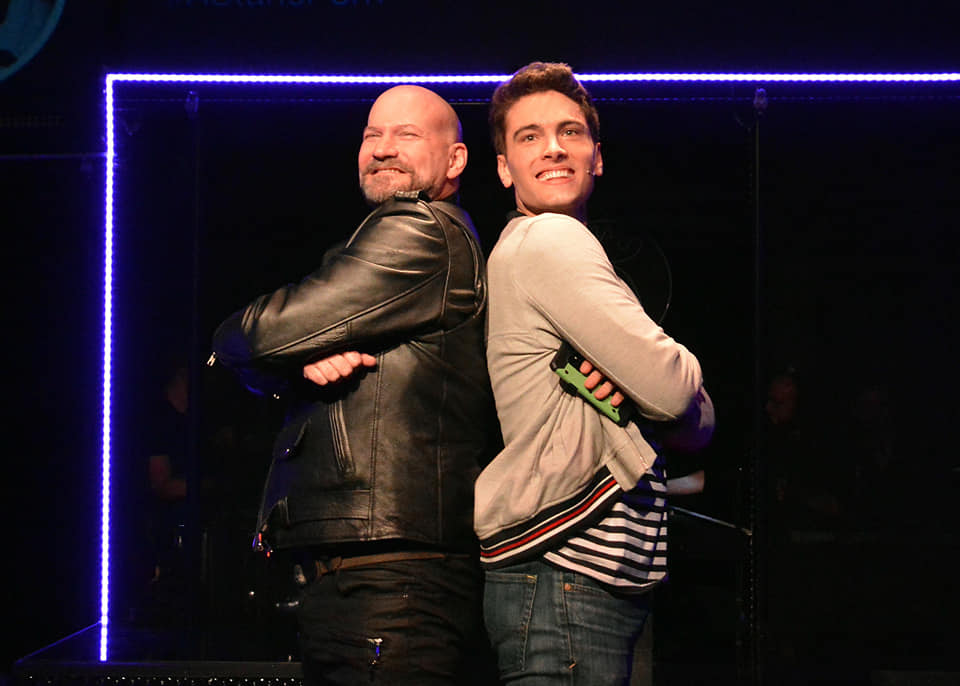 While I am still waiting for a book on the Adult Operettas of the 1860s (“groveling in a low depth, even below decency,” as The Tribune wrote about Offenbach’s Genevieve de Brabant in 1870), Florian Klein and his Shooting Star team have certainly written an “adult” musical about sociosexual mores of our time: they show how an aspiring young actor from Indiana comes to California, cannot land a job at auditions because he comes across as “too gay,” starts working as a waiter, then a go-go boy, and finally as a porn actor as a last effort to pay his bills. In the course of two acts this innocent boy is sucked into a world of easy sex that makes young good-looking “things” instant stars, but also drops them just as quickly when the next good-looking person comes along. How can one fulfill one’s dream of “acting” under such circumstances, how can one find love and a relationship while being a sex worker, how does one tell one’s parents about such a career move, and what comes after the short blast of x-rated fame? 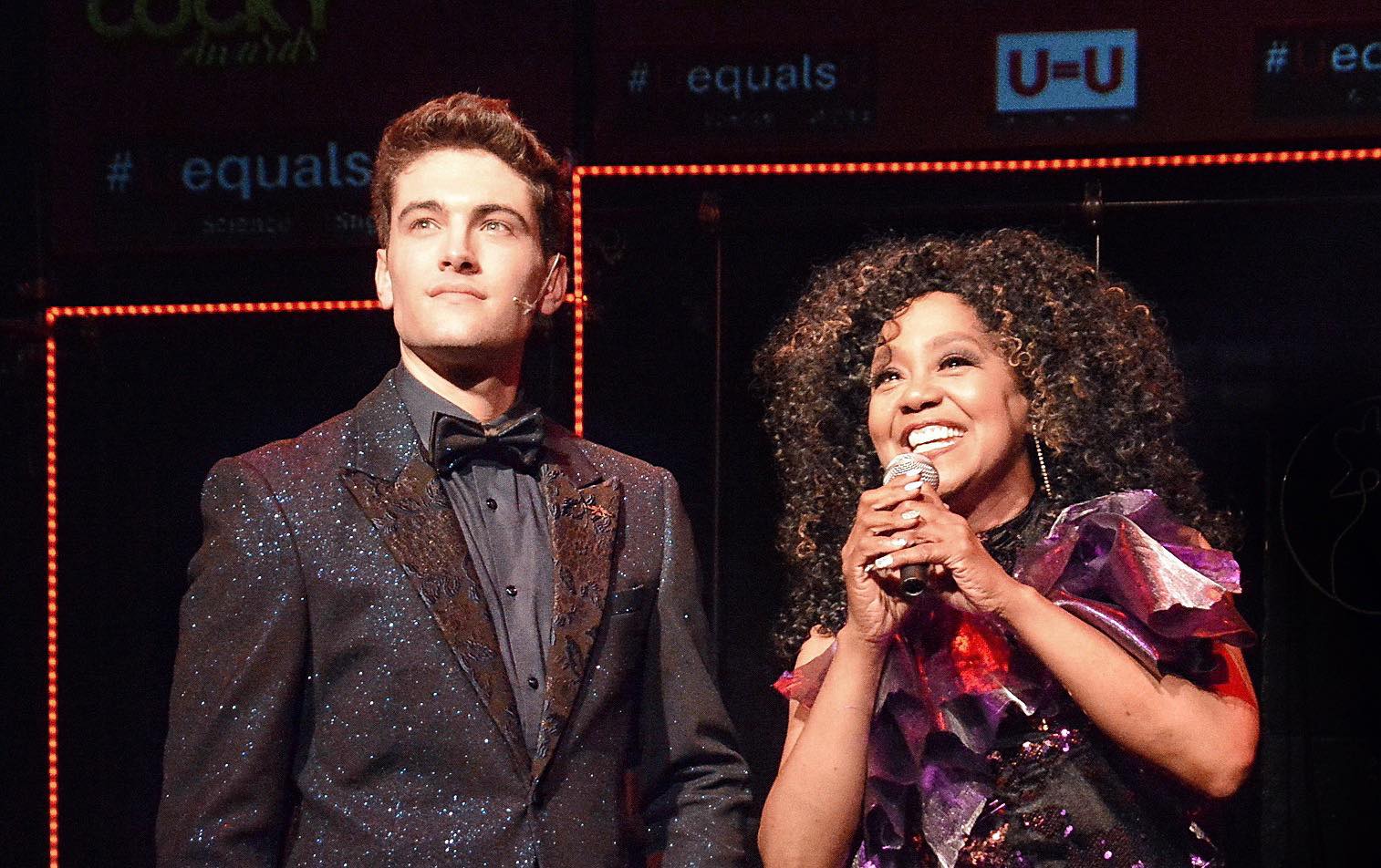 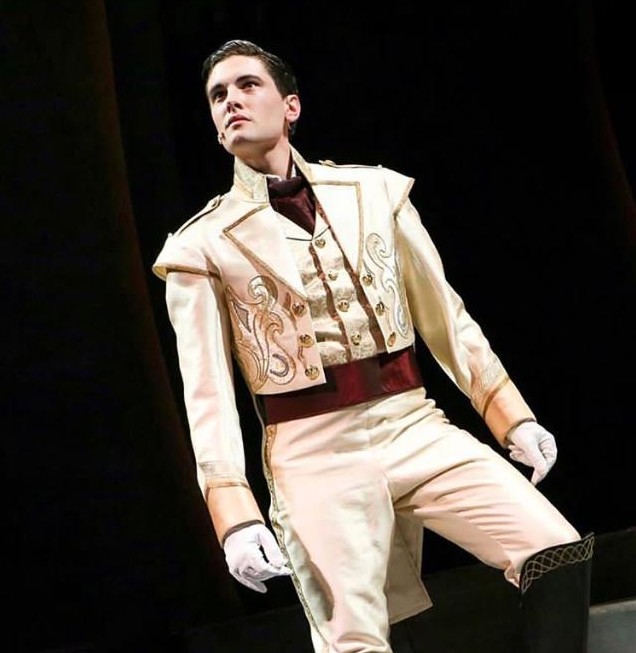 Mr. Nadalini recently played Prince Hans in a live action version of Frozen. A real life Disney prince as Taylor Trent is comparable to having Disney’s Garret Clayton as Brent Corrigan in the recent movie King Corba; it emphasizes the sinister fairy tale aspect of the story, but it also makes this story incredibly touching. And watching Mr. Nadalini’s knock-out performance is touching – he literally glows on stage and brings a vulnerability to his songs that lifts the Zaufke music off the page and into a different realm. A friend of mine started crying listening to Nadalini/Trent pouring his heart out in the various ballads.

While I sat thinking of Nana many times during Shooting Star (there are various scenes involving nudity) I also wondered if Mr. Nadalini could make a real operetta hero, too? In his review, Steven Stanley calls him one of “the most triple-threat-tastic performers in town.” At the top of my operetta wish list, triple-threat Nadalini would be perfect as Landry in Herve’s Chilpéric, a role Claude Marius performed in London and which Emily Soldene raves about in her memoirs, grinning that every girl in the stalls dreamed of making love to Mr. Marius.

Opéra-bouffe as sexual fantasy and stimulation: it’s not far removed from Shooting Star. For a serious Hervé revival Mr. Nadalini should be considered as a first choice. Or a revival of Adonis, the boylesque retelling of the famous Galatea saga from the 1880s. Mr. Nadalini’s singing – including an expressive upper range – would be ideal for both. 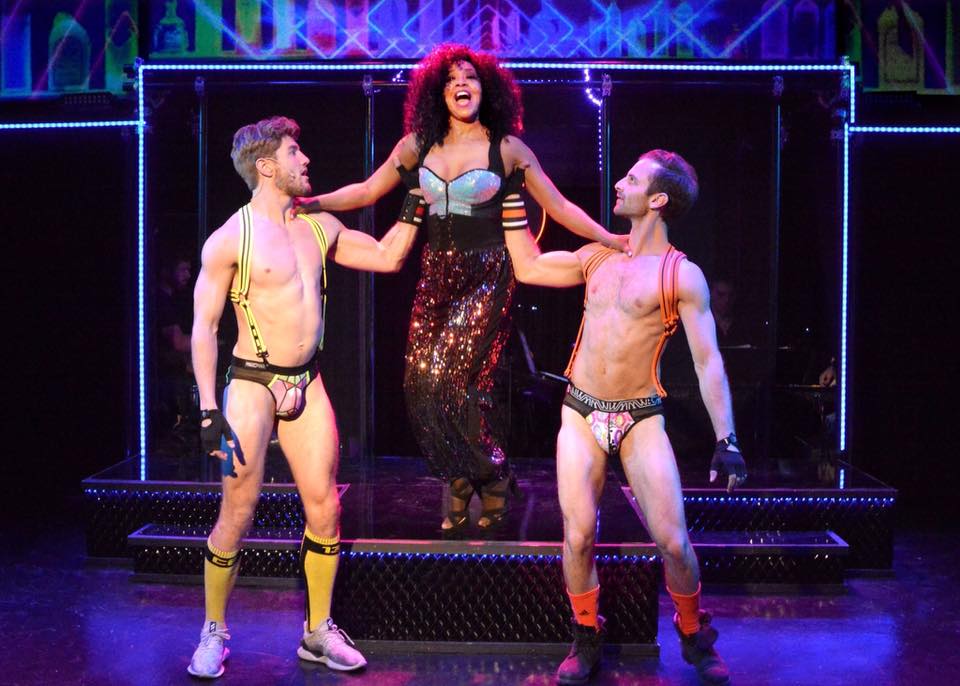 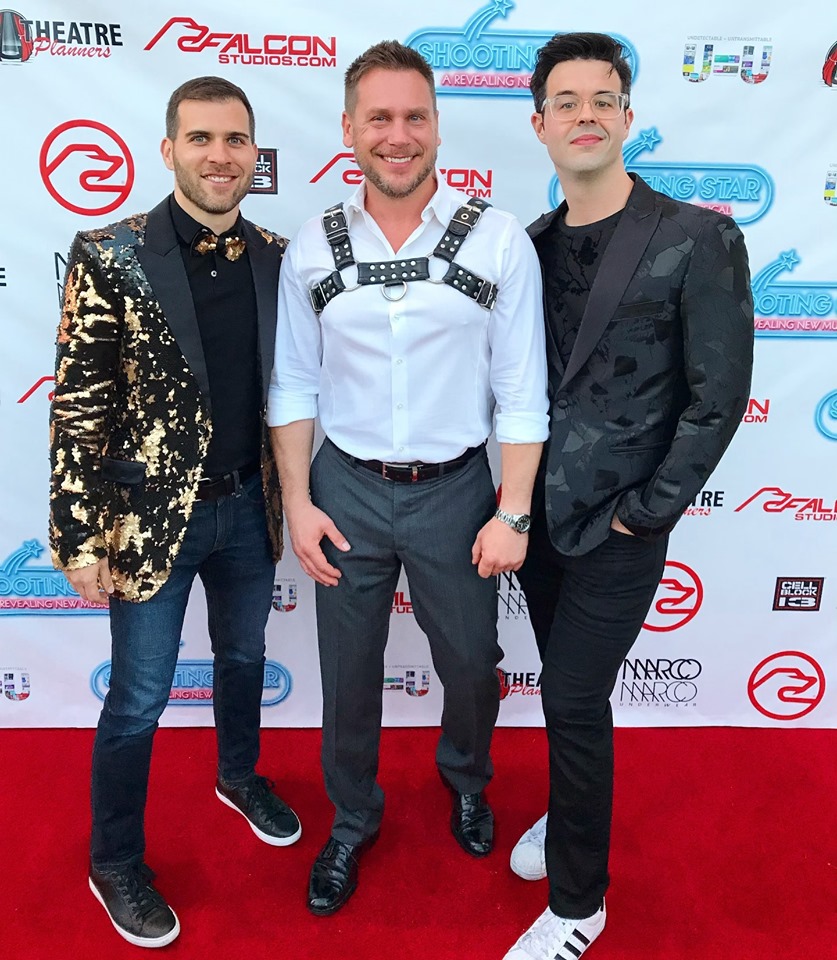 The production of Shooting Star will run for six weeks in Los Angeles and can be seen there during Pride Season. It might still be work-in-progress, and it could use different orchestrations, but I’d love to have a cast album, because hearing Taubert Nadalini is a treat, whether together with Carson Robinette in “All the Lovers” or with Nathan Mohebbi in the snappy “I’ll Keep My Clothes On.” And then there is Bettis Richardson as an aggressive “Tiger Black” with songs such as “Party Like a Porn Star” and Karole Foreman with her eleven o’clock number “He Was My Friend.” (And, yes, Michael Scott Harris’s “Golden Days” number must also be mentioned again.)

The staging at the Hudson Theatre is the first public production, after an industry reading in NYC last year and another one in LA, all sponsored by Charles Leslie from the Leslie-Lohman Museum of Gay and Lesbian Art in New York.

I’m very curious to see where this show will go next – and the fact that both my parents enjoyed it, and complimented Florian Klein on his work afterwards, makes me believe that it has potential beyond a gay core audience. Florian Klein thanks his own parents for their ongoing support in the program, which I find incredibly endearing.

To quote Laura Kipnis one last time: “Audiences constitute themselves around things that matter to them, and stay away in droves when no nerve is struck.” Shooting Star definitely strikes a nerve, as does Nana and Offenbach. Bringing the elements back together, just like the current revived interest in Weimar Republic culture with its combination of “hedonism, sex, and fear,” might be an interesting future for 19th century operetta. The genre’s dimly lit corridors are full of “larger issues.” Rediscovering them is well worth the effort.

For more information and performance dates of Shooting Star, click here. For details about the Offenbach conference in Cologne, click here.