If you’re watching this space, you might have registered some recent frustration with current operetta conductors who were not quite up to par with some of the more spectacular operetta singers of today. Well, here is some good conducting news to level this out a little: Joseph R. Olefirowicz, the “dancing conductor” of YouTube fame, and one of our great operetta heroes, has been engaged by the Münchner Symphoniker to conduct their traditional Silvesterkonzert in the Philharmonie as well as the Neujahrskonzert in Prinzregententheater. 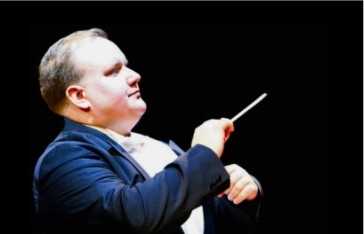 The program of the Munich Symphony Orchestra will start off with the overture to the Fledermaus, but then moves onto some more transatlantic favorites, such as Gershwin’s An American in Paris, Elgar’s Pomp & Circumstance marches (yep, No. 1 it is!), Bernstein’s Candide overture, the „Flying Theme“ from E.T. and a Leroy Anderson’s triple treat: Belle of the Ball, Blue Tango, Bugler’s Holiday. Add to this some Korngold and you have a bouncy program that fits the special talents of Mr. Olefirowicz to a T.

Olefirowicz came to our attention when he conducted a spectacular performance of the Charell/Benatzky revue-operetta “Die drei Musketiere” in Nordhausen.

He proved, back then, that he can really lift this Broadway influenced music off the ground and make it swirl irresistibly. So irresistibly, in fact, that the bosses of the Vienna Volksoper, who had flown to Nordhausen to hear him, hired him on the spot and gave him a chance to shine with more funky titles in Austria. Apart from Guys & Dolls, Olefirowicz conducted a magical Blume von Hawaii and Candide. From the latter a short clip of him conducting landed on YouTube and became something of a sensation. The “dancing conductor” was born!

Now, the Bavarian operetta forces have hired him as well. Which is especially interesting, since there is a well-documented Lehar cycle underway at the Philharmonie in Munich which suffers from some un-bouncy conducting by Ulf Schirmer, who lacks Olefirowicz’s Broadway baby temperament. (A temperament that would befit Lehar well, if you do not wish to recycle old-fashioned performance traditions over and over again, when there are already stellar old-fashioned recordings of that tradition out there on disc, which are sort of untoppable.) 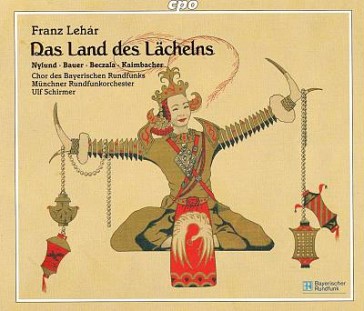 The cover of the Munich “Land des Lächelns” on CPO.

Also. Munich has the Gärtnerplatz-Theater offering various forays into the realm of jazz operetta, e.g. the recent Zirkusprinzessin. Having a conductor such as Olefirowicz at hand might spark thinks up a little there too. So let’s hope someone from the Gärtnerplatz team will go and hear Olefirowicz.

The New Year’s concert will have Max Müller as MC, known in Germany for playing „Polizeimeister Michi Mohr“ in the TV series Die Rosenheim Cops. Before he became a cop, he was trained as an opera singer in Vienna.