The repertoire Tyrolean tenor Martin Mitterrutzner presents on his new album Heut’ ist der schönste Tag was made popular in the 1930s by people such as Joseph Schmidt, Jan Kiepura and Richard Tauber. To make it truly come alive you need a certain type of vocal swagger, a willingness to go over the top and overwhelm the listener with bravado, balanced with stylized ‘macho’ eroticism. (Not to be confused with toxic masculinity.) And of course ringing top notes are a big plus. 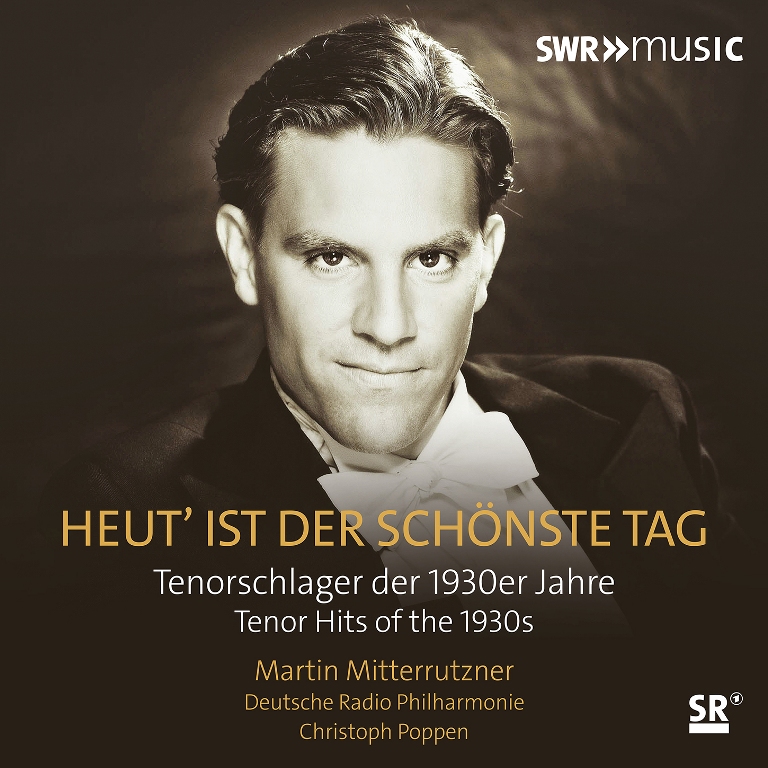 The 37 year old Mitterrutzner certainly has the movie star looks associated with these hits that were – in most cases – originally presented in movies, composed by people such as Hans May, Mischa Spoliansky, Robert Stolz and others. Mitterrutzner also possesses that silvery timbre with a pleasant ring that records well, and he’s wonderfully clear in the way he pronounces the lyrics by Brammer & Grünwald, Ernst Marischka, Bruno Balz, Fritz Roller or Marcellus Schiffer. What he doesn’t have – or at least he does not show it here – is any willingness to leave ‘good taste’ and ‘refinement’ behind and grab these titles (and the listener) by the balls, metaphorically speaking.

Mitterrutzner’s approach to the songs is always careful and a little restrained. Which has its charm when he sings titles such as “Plaisir d’Amour” or the melancholic “Grüß mir mein Wien” from Kalman’s Gräfin Mariza. He seems to have studied Fritz Wunderlich and copies many of his predecessor’s brilliant shadings, but he holds back when it comes to building up emotional tension – and moving forward with some sense of excitement.

Maybe conductor Christoph Poppen should have infused (a lot!) more drive into the Deutsche Radio Philharmonie. They play arrangements that sound like they are from the 50s and 60s, certainly not from the 30s. And the orchestra, too, sounds very careful and restrained, as if fearing they might lose their classical standing with too much show business razzle dazzle.

While the voice has a honeyed quality in the quiet sections mentioned above, it displays a somewhat unpleasant vibrato when put under pressure for the unavoidable big bang moments. This is a Tamino singing with a Mozart voice, this is not a Kiepura or Schmidt with a squillo to knock you flat, or a Tauber who whispers suggestive somethings into your ear. And when you get to “O Sole Mio” – in a German translation – you should not expect Big P. fun with this Eduardo di Capua evergreen. 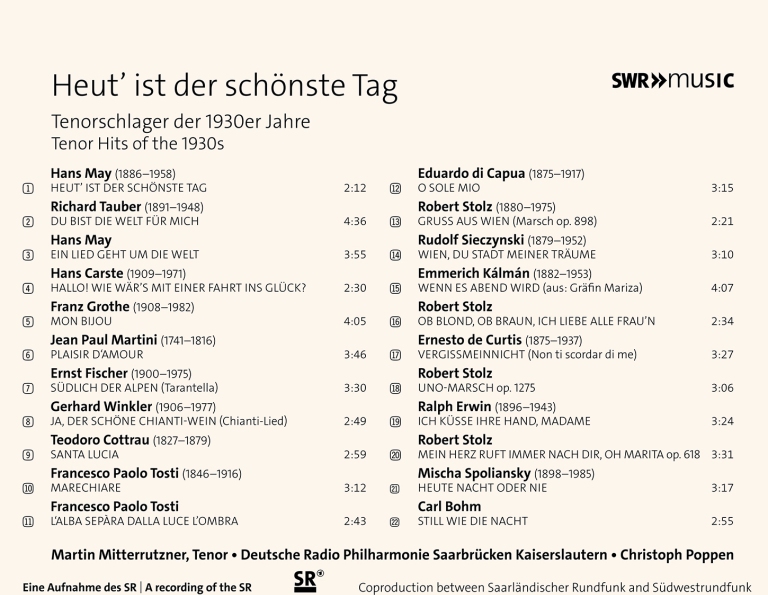 In between the many vocal numbers there are also various instrumental tracks, e.g. Robert Stolz’s United Nations March. It’s an interesting combination. Also the inclusion of so many numbers by composers of the Nazi era, many of who successfully continued working after World War 2 while hardly any of the emigrated composers managed to return to old glory and position, if they survived the war at all.

In his booklet essay Stefan Frey addresses this, in a matter of fact way, also pointing out that people such as Hans Carste or Franz Grothe were prominent members of the Nazi party. While such important historic background is mentioned, it is not made audible in the interpretations. Which makes it an extra pity that we don’t get to hear original orchestrations, but one-type-fits-all arrangements that blur any differentiation between pre- and post-1933.

Obviously, someone like Martin Mitterrutzner would make for an interesting new operetta singer should he ever decide to venture past these “Schlager” titles and tackle entire roles, such as Tassilo in Gräfin Mariza or anything by Spoliansky or Stolz. Not to mention Leo Fall, Oscar Straus, Bruno Granichstaedten etc.

It’s great to see that Naxos is distributing this album internationally, nicely packaged with a stylish cover photo by Uwe Arens. I, personally, would have wished the actual singing were as stylish as the packaging. But I hope this will not be the last excursion of Martin Mitterrutzner into the realm of operetta.

If you want to hear more of Mitterrutzner, check out the recent Merry Widow from Frankfurt, he can be heard as Rosillon on the Oehms Classics album (click here for a review).