Gilbert and Sullivan’s successor to the phenomenal HMS Pinafore proved to be another enormous international opéra-bouffe hit. Where the former piece had burlesqued things theatrico-naval, the new one, developed from an original scenario about some burglars combined with some elements of an earlier Gilbert operetta, Our Island Home, used the highly coloured characters and conventions of the melodrama stage as the butt of its fun. It previewed at the Bijou Theatre, Paignton, on 30 December 1879; the world premiere was at the Fifth Avenue Theater, New York, on 31 December 1879. 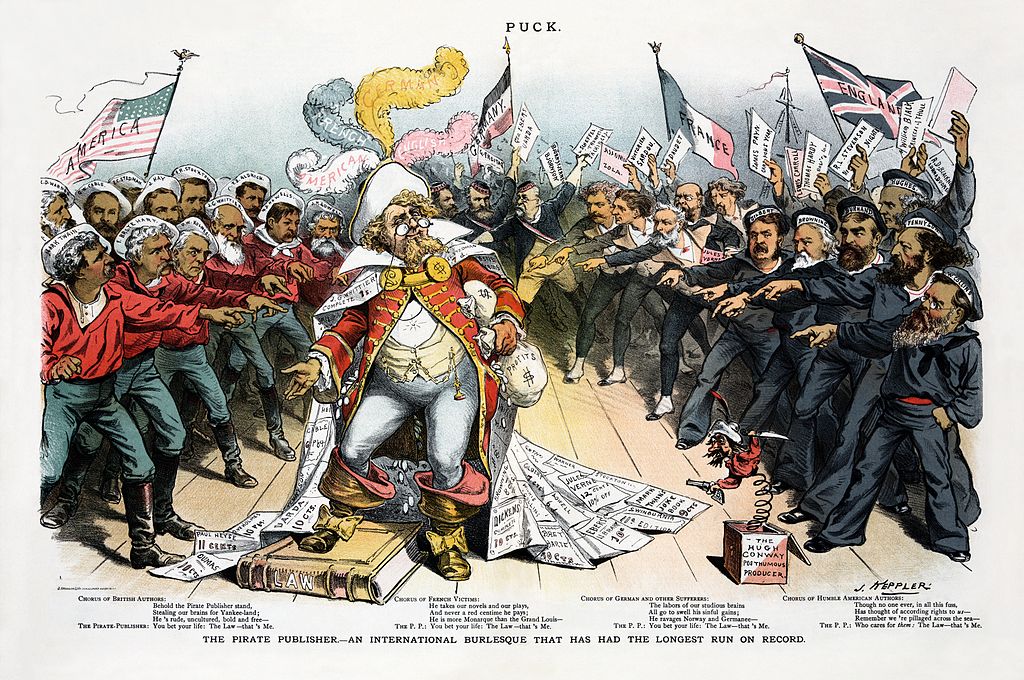 “The Pirate Publisher – An International Burlesque that has the Longest Run on Record.” From “Puck,” 1886. Gilbert is seen as one of the British authors whose works are stolen by the pirate publisher. Drawing by Joseph Ferdinand Keppler (1838-1894).

Owing to an error by his childhood nurse, Ruth (Alice Barnett), Frederic (Hugh Talbot) was accidentally apprenticed to the Pirate King (Sgr Broccolini). Now, after having faithfully served his indentures to the age of 21, he is free and his well-pronounced sense of duty drives him to join the police force and devote himself to the extermination of his old skull-and-crossbone-mates. Back in the unpiratical world, Frederic falls in love with the first soprano he sees: Mabel (Blanche Roosevelt), daughter of Major General Stanley (J H Ryley). Unfortunately, the pirates are out for revenge on Stanley, who has unfeelingly fibbed himself out of a confrontation with them just as they were about to wed his daughters en masse. Frederic is preparing to lead the police in a raid against the buccaneers, but he is stopped when it is revealed that by a strict reading of the wording of his indentures he is still bound in loyalty to his old master. Battle is joined between pirates and police, and, with the duty-bound Frederic helpless to prevent them, the pirates are victorious — until the police bring out their secret weapon: the name of Queen Victoria. As loyal subjects, the pirates surrender. Then Ruth comes out with the truth: they are all actually errant peers in disguise, so their youthful naughtinesses can all be forgiven and they can mass marry General Stanley’s daughters after all.

Sullivan’s score echoed the burlesque fun of the script, whether in a rousing song for the pirate king (‘Oh, Better Far to Live and Die’), the merry parody of operatic coloratura in Mabel’s ‘Poor, Wandering One’ or her extravagantly dramatic farewell (‘Go, Ye Heroes’) to the counter-melodied police forces, off to die in battle.

As in HMS Pinafore, there was a wordful self-descriptive set-piece for Stanley (‘I Am the Very Model of a Modern Major General), introducing himself much as Sir Joseph Porter had done in the earlier show, a lugubrious comic number for the Sergeant of Police (Fred Clifton), a song of confession for Ruth, the successor of Little Buttercup’s confession from the previous show (‘When Frederic Was a Little Lad’), and some rather less burlesque material for Frederic and Mabel, initiating their romance whilst Mabel’s sisters gossip tactfully about the weather or, in particular, bidding each other farewell with seeming sincerity before Frederic is forced to change sides again (‘Ah! Leave Me Not to Pine Alone’). The whole was topped by ensemble and chorus music in turn pretty, parodic and atmospheric.

Poster for the preview in Paignton, 1879.

Produced under the management of Richard D’Oyly Carte, now acting as an independent producer for the first time after his battles with his consortium of backers over Pinafore, The Pirates was mounted almost simultaneously in New York and in Britain, in order to protect the copyright of the piece in both countries. But the continuing run of HMS Pinafore at the London Opera Comique meant that whilst a first-class production was staged on Broadway (with the cast given above), the British end was secured by a mocked-up approximation of the show put on at Paignton, Devon, by one of Carte’s touring companies. It took place, because of the time difference, slightly before the other, so Richard Mansfield (Stanley), Emilie Petrelli (Mabel), Lyn Cadwaladr (Frederic) and Fred Federici (King), in theory, ‘created’ their rôles. Except that what they ‘created’ was scarcely what is known today as The Pirates of Penzance. 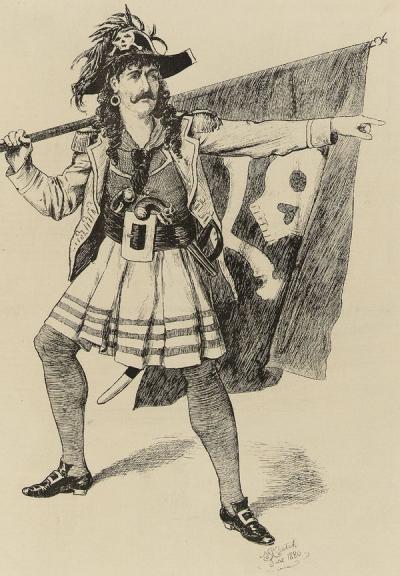 Drawing of Richard Temple as the Pirate King.

The Pirates of Penzance was a great hit in New York (‘one of the greatest financial successes of this or any season, the Fifith Avenue Theatre is positively jammed to the doors every night while the sale of seats in advance contginues unprecedented’), but some uncharacteristic mismanagement by Carte meant that its Broadway run was a messy one, in three different theatres over five months. But by the time it closed and the myriad of companies around America which had coined a fortune on Pinafore had leaped onto the firmly in-copyright The Pirates of Penzance, Carte had opened his London version with a lead cast made up largely of the Pinafore veterans for whom the rôles in its successor had been conceived. Grossmith was Stanley, Richard Temple the Pirate King and tenor George Power played Frederic. There was a pretty new Liverpudlian-Jewish soprano called Marian Hood to play Mabel, Emily Cross stepped in to play Ruth when Pinafore’s Harriet Everard was injured by falling scenery in rehearsal, and Rutland Barrington, who hadn’t been included in the line-up, asked for and got the rôle of the Police Sergeant originally planned for Clifton. 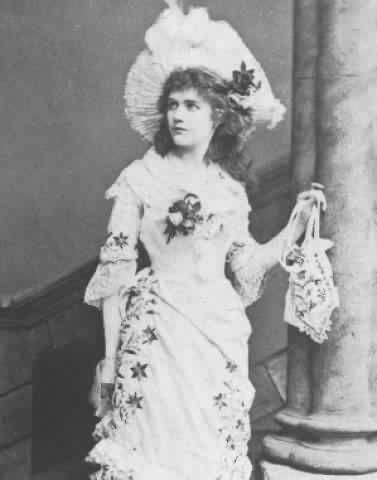 Marion Hood as Mabel in “The Pirates of Penzance.”

The Pirates of Penzance repeated its Broadway success in London (3 April 1880), playing exactly a year and 363 performances at the Opera Comique before giving place to the next Gilbert and Sullivan show, and thereafter it had an uneventfully successful life as a prominent part of Carte’s repertoire, being toured incessantly and brought back for regular revivals by his principal London-based company. The rest of the English-speaking world also snapped up the new Gilbert and Sullivan show and Australia’s J C Williamson introduced his production, without the unlawful challenges he had suffered on HMS Pinafore, in 1881. James South was the Major General, Armes Beaumont played Frederic and Josephine Deakin/Elsa May shared Mabel whilst J C Williamson himself played the Sergeant of Police, soon joined by his wife, Maggie Moore, in the rôle of Ruth. The Pirates of Penzance became a huge Australian favourite and was revived regularly over the next century.

An 1880 poster for “The Pirates of Penzance,” showing the Major General as an “orphan boy.”

Like the bulk of Gilbert and Sullivan’s works, The Pirates of Penzance got little exposure in any language but its own but, following the success of The Mikado in Austria, Richard Genée and Camillo Walzel did the piece over into German for the Theater an der Wien. ‘The libretto was entirely rearranged, not altogether to advantage, and selections from Sullivan’s other operettas interpolated into the score’. It was voted ‘an undoubted success’but proved to have none of the attractions for Austrian audiences that the oriental piece had, and was played only 16 times. 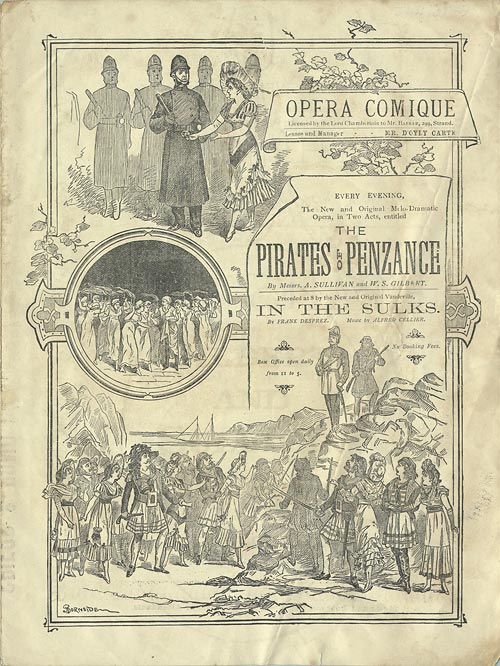 Programme cover for the 1881 production at the Opéra Comique in London.

The show was given a major re-lease of life in 1980 when the New York Shakespeare Festival produced an uninhibitedly high-spirited version of the piece which, in spite of tacking in some unfortunate outcuts and clumsily interpolating two numbers from other shows, stayed fairly close to Gilbert’s text.

The music was partly re-orchestrated for a modern band whilst retaining the spirit of the original. With Linda Ronstadt (Mabel), George Rose (Stanley), Rex Smith (Frederic) and Kevin Kline (Pirate King) in the leading rôles, this production played 787 performances on Broadway — the longest run anywhere and ever of a Gilbert and Sullivan show — and was reproduced at London’s Theatre Royal, Drury Lane, with Pamela Stephenson, George Cole, Michael Praed and Tim Curry with similar success (601 performances) before being taken up around the world. It was also filmed, toured Britain endlessly and got a further London season, at the Palladium with Bonnie Langford (Mabel) and Paul Nicholas (Pirate King) starred, whilst the original version – with no royalties attached – continued to be played as often and elsewhere as it had over the century and a bit past. A German version (ad Klaus Straube), wrongly advertised as a ‘deutschsprachige Erstaufführung’, and based on this production, was given in Dortmund in 1994 (Opernhaus, 5 February) and at Berlin’s Theater des Westens in 1996 (139 performances) as The Pirates of Penzance began to find its way into the theatres of Europe more than a century after its first production.

Earlier filmed versions included television recordings, two brief 1955 efforts by members of the D’Oyly Carte Company, and a videofilm in the Brent-Walker series of recordings of the Gilbert and Sullivan opus. 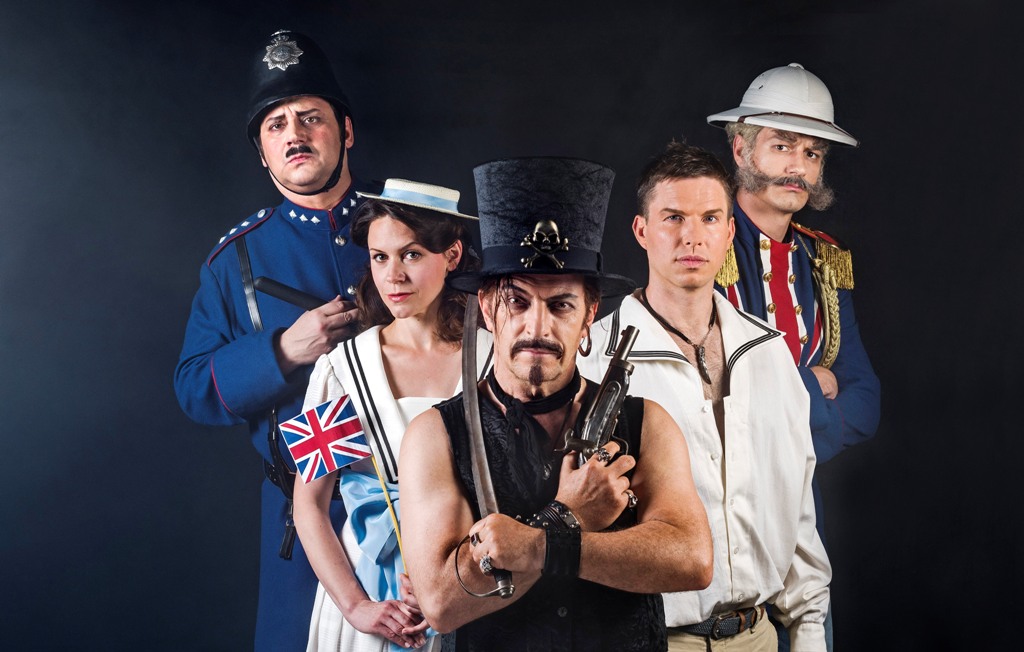 The “Pirates of Penzance” at the Musikalische Komödie Leipzig, 2016. (Photo: Kirsten Nijhof)