The Hollywood spoof Axel an der Himmelstür, with music by Ralph Benatzky, premiered at the Theater an der Wien in 1935 with a superstar cast that included Max Hansen as the quirky Hollywood reporter Axel and Zarah Leander as film goddess Gloria Mills who doesn’t want to give interviews. This show about the mad-cap aspects of the film industry was a huge hit, it catapulted Zarah Leander to real-life film stardom in Nazi Germany. Because Benatzky was non-Jewish the Nazis allowed many of his shows to stay in the repertoire, including Axel. Even though Benatzky emigrated to the US because of his Jewish wife. Johannes Heesters starred in a re-written version that moved to story from the USA to Germany. Heesters performed Axel at the Gärtnerplatz Theater in Munich, it’s the production that was invited to concentration camp Dachau in 1941 – where Heesters might nor might not have appeared in it in front of officers and soldiers. A film version starring Heesters and the divine Zarah Leander would have been an ideal option. Because of contract problems this never happened. Instead, a film called Liebespremiere was made in 1943 that is loosely based on Axel, starring Kirsten Heiberg as the temperamental diva and Hans Söhnker as Axel, not a journalist anymore but a composer. The film credits claim it’s “after an idea by Geza von Cziffra” (instead of the Jewish Paul Morgan who had been killed in Buchenwald in 1938), and the new song texts are by Bruno Balz instead of Hans Weigel (who was in Swiss exile by that time). 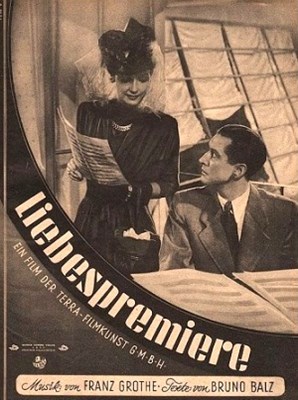 As a watered-down standard back-stage film musical – with new songs by Franz Grothe, showing none of the genius of Benatzky – Liebespremiere could easily be put aside as just another one of many sad examples of routine operettas from Nazi times. But there’s something fascinating about the film which has just been made available on YouTube for the first time, in its complete version.

The fascinating aspect is that in the 1943 re-telling of the story “operetta singer” Vera Warden (instead of Hollywood diva Gloria Mills) wants to have a child, but without binding herself to a man as the child’s father. She only wants his sperm and wishes to continue living alone with the baby. This shocks her best married fried Jenny who keeps telling Vera why this is a bad idea – all of her arguments are pushed aside by the highly emancipated operetta star. But did the idea of a sperm donor and baby without a father shock a 1943 movie audience, too? 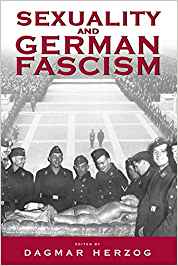 At this late stage of the war women all over Germany were having babies without being married. This was actually sanctioned by the Nazis. As historian Dagmar Herzog points out in various books on sexuality in 20th century Germany, the Nazis favored extremely liberal sexual politics, at least for those they considered ‘worthy’ Germans. In their view, Aryans should have as much ‘healthy’ sex as they like and produce as many ‘healthy’ children as possible without the moral restrictions of Christian churches. The Nazis went as far as labeling Christian morale a later ‘foreign’ invention that brought down the original superior power of the Germanic race. For the Nazis, sex was there to be enjoyed by members of the master race, and Aryans should enjoy it as much as the liked as a healthy and natural pastime. (Natural meaning: heterosexual.)

The film script was written by Willy Clever and Ellen Fechner, the latter a novelist who had collaborated by film actor Hans Söhnker and film director Arthur Maria Rabenalt the previous year in Meine Frau Teresa. Whether she brought all the sperm-donation elements into this film operetta is anyone’s guess. But they are there … and in typical Nazi fashion they are presented in an almost schizophrenic way. Because after all the liberated arguing about not needing nor wanting a man in her life, Vera Warden finally falls for composer Axel Berndt (played by Mr. Söhnker) and enters a traditional marriage despite everything. A ‘traditional’ happy end is secured. 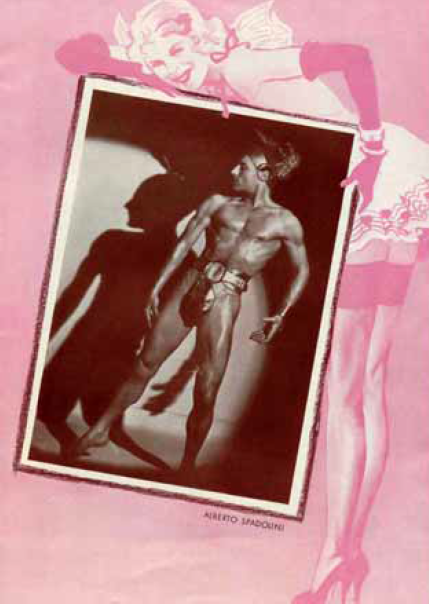 This schizophrenic situation, you could also call it double morale or double standard, can be found elsewhere too in Nazi operetta. Think of the Lustige Witwe produced in 1940 in Berlin with Johannes Heesters as Danilo, a production applauded by Hitler himself. In that version you get to see nude male dancer Alberto Spadolini who is rumored to have been a spy and who is supposed to have had affairs with men and women. He was also the former dancing partner of Josephine Baker in one of her Parisian jazz revues. How does all of this fit together with what we think of as the desexualized and restricted moral ideals of Nazi operetta? 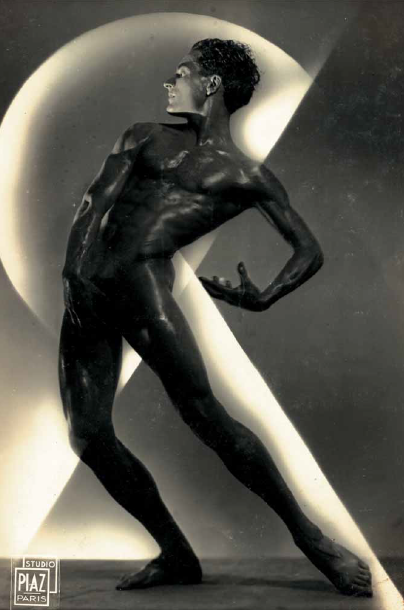 After Lustige Witwe, Mr. Spadolini toured Germany in the early 1940s showing off his body to mostly adoring female fans. (The men were fighting a war elsewhere, remember, so the ladies back home needed to be entertained. And what better way to do this than with a heroically muscled hunk for Italy, the German war ally?)

In the 1943 Liebespremiere, such sexual liberties are explored too, and it’s a very ‘feminist’ story about women’s topics a female audience could identify with. As Miss Herzog points out, the true turning point, away from sexual freedom to a fully supressed moral climate, came after the war when the Christian churches tried to set things straight again (so to speak) and claimed to be the guiding force to get Germany out of the moral dilemma of having to face post-Holocaust guilt. In such a climate, with the whole world pointing fingers at Germany and asking how much the Germans knew of what had been going on, no one wanted to admit that they had a fun time fucking around as the liberated Germanic master race. So films such as Liebespremiere disappeared from the radar. They did not fit the 1950s and 60s ideal of sex free and politics free operetta, of operetta as “safe space” where the audience was not confronted with burning questions from the past. Which explains a lot about why post-war operetta became what we know it as in Germany – a mere shadow of its former glorious self. 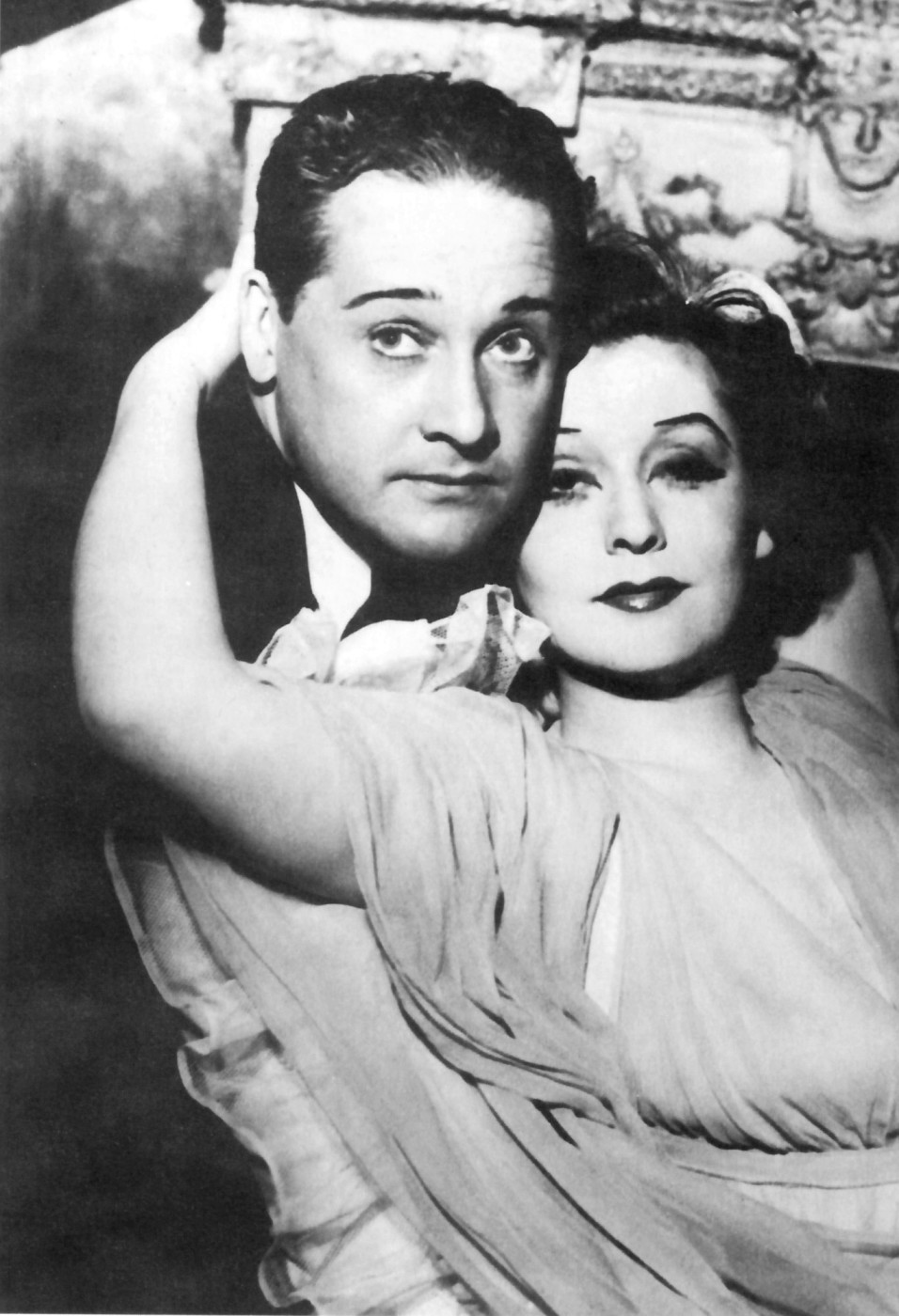 Zaral Leander together mit Max Hansen, in the original production of “Axel” 1935.

It’s a topic that is little explored. Matthias Kauffmann deals with it in his latest book Operette im Dritten Reich. But it’s a topic that needs more discussion. By the look of it, an operetta conference at the University of Leeds next January (2019) will tackle the topic and hopefully open it up for a wider in-depth analysis that’s way overdue.

Till then, we recommend Dagmar Herzog’s book Sexuality and German Fascism (2004) and Matthias Kauffmann’s Operette im Dritten Reich; and of course we recommend watching Liebespremiere – and then listening to Max Hansen reminding us of what operetta was once all about, with his Hollywood yodel song from Axel an der Himmelstür. It remains one of the stand-out operetta performances of all time. And if you haven’t got that version on CD, here’s an alternative performance by Toni Pfister (Tobias Bonn) singing it on YouTube.