Forever branded as Gilbert and Sullivan’s “serious” comic opera, The Yeomen of the Guard is in fact a skilful blend of whimsy, comedy, sentimentality and poignancy, based around the pending execution of Colonel Fairfax (Anthony Gregory) for sorcery at the Tower of London in the 16th century, giving Gilbert scope for some pseudo Elizabethan dialogue and Sullivan the opportunity of composing some imposing music. 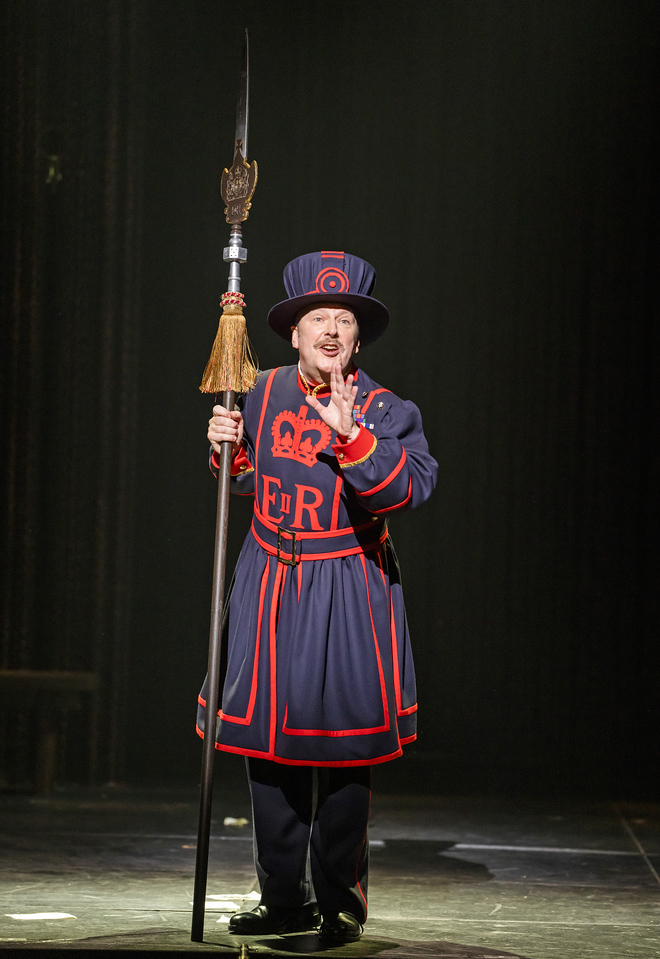 Neal Davies (Sergeant Meryll Of The Yeoman) in “Yeomen of the Guard” at ENO. (Photo: Tristram Kenton)

Jo Davies’ production at the London Coliseum moves the action forward to the early 1950s, which jars with history, as the last state prisoner to be housed in the Tower was Hitler’s assistant Rudolf Hess in the early 1940s.

Davies has changed a few words in the libretto and interpolated the Patter Trio from Ruddigore towards the end of Act Two, but her production is hampered by a set (Anthony Ward) which, although appropriately dark and gloomy, leaves the stage looking empty during most of the scenes in which the chorus is not present. 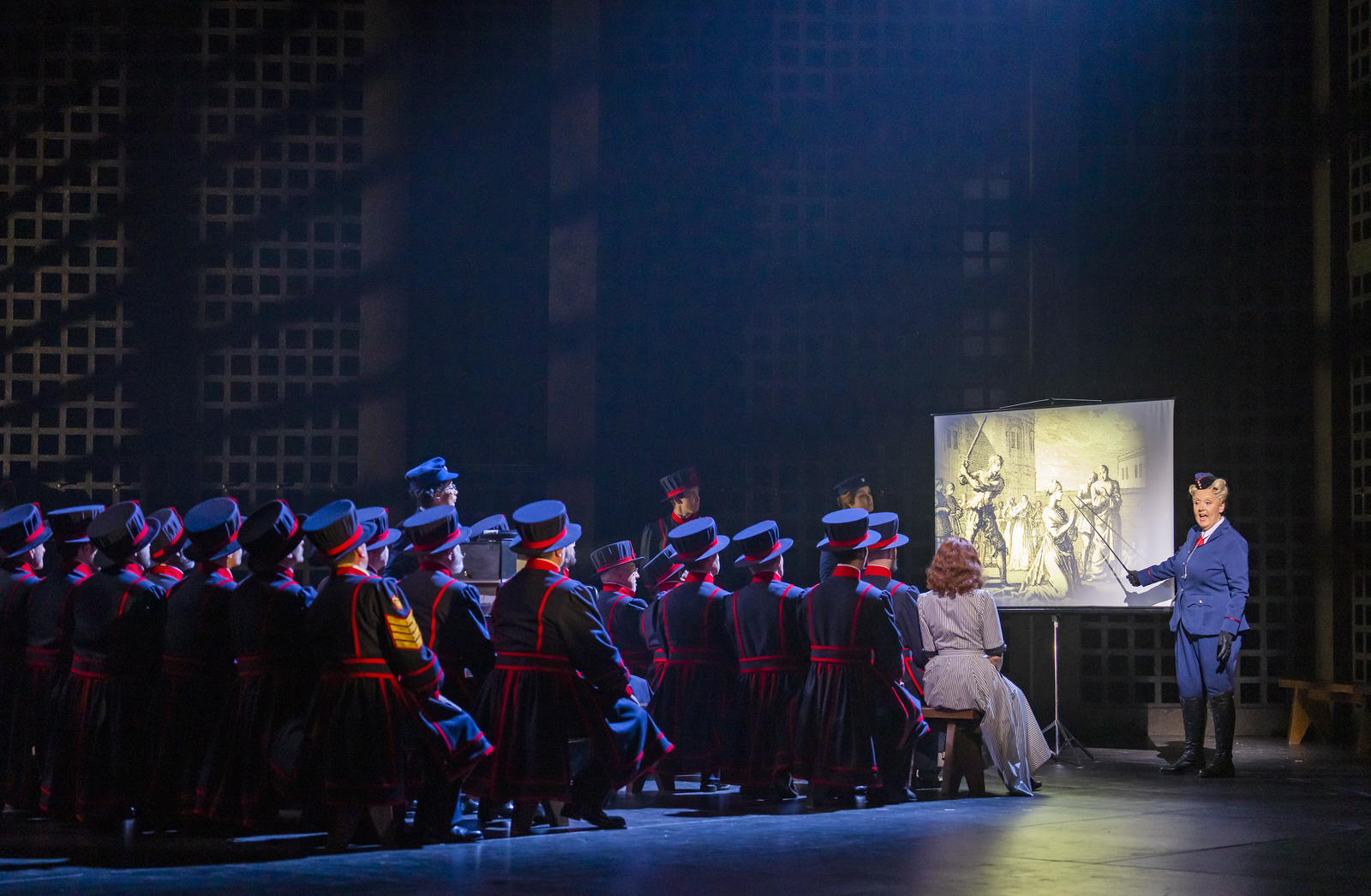 Scene from “Yeomen of the Guard” at the Coliseum. (Photo: Tristram Kenton)

Although dialogue appears ‘miked’, it is very slow: the vastness of the Coliseum seeming to inhibit any attempt at pace.

Sometimes a musical number is misdirected: for example, Fairfax’s “Is Life a Boon”, a serious, contemplative number, has to cope with a couple of soldiers wearing “bearskins” comically dancing! Totally inappropriate!

The cast does well to cope with the vagaries of the production. Alexandra Oomens is a superb singer/actor, making the most of her act one solo, Heather Lowe overacts madly as Phoebe but the role of Dame Carruthers needs a contralto rather than Susan Bickley’s mezzo, good as she always is.

The most impressive of the men is Steven Page as the lieutenant of The Tower, Sir Richard Cholmondeley. He has the charisma, and the costume, to really inhabit this usually secondary role besides demonstrating a superb voice and ability to command the stage.

John Molloy as Shadbolt, the “assistant tormentor” – a role which certainly did not exist in the 1950s! – is well sung but his Irish (?) accent in dialogue is highly suspect! 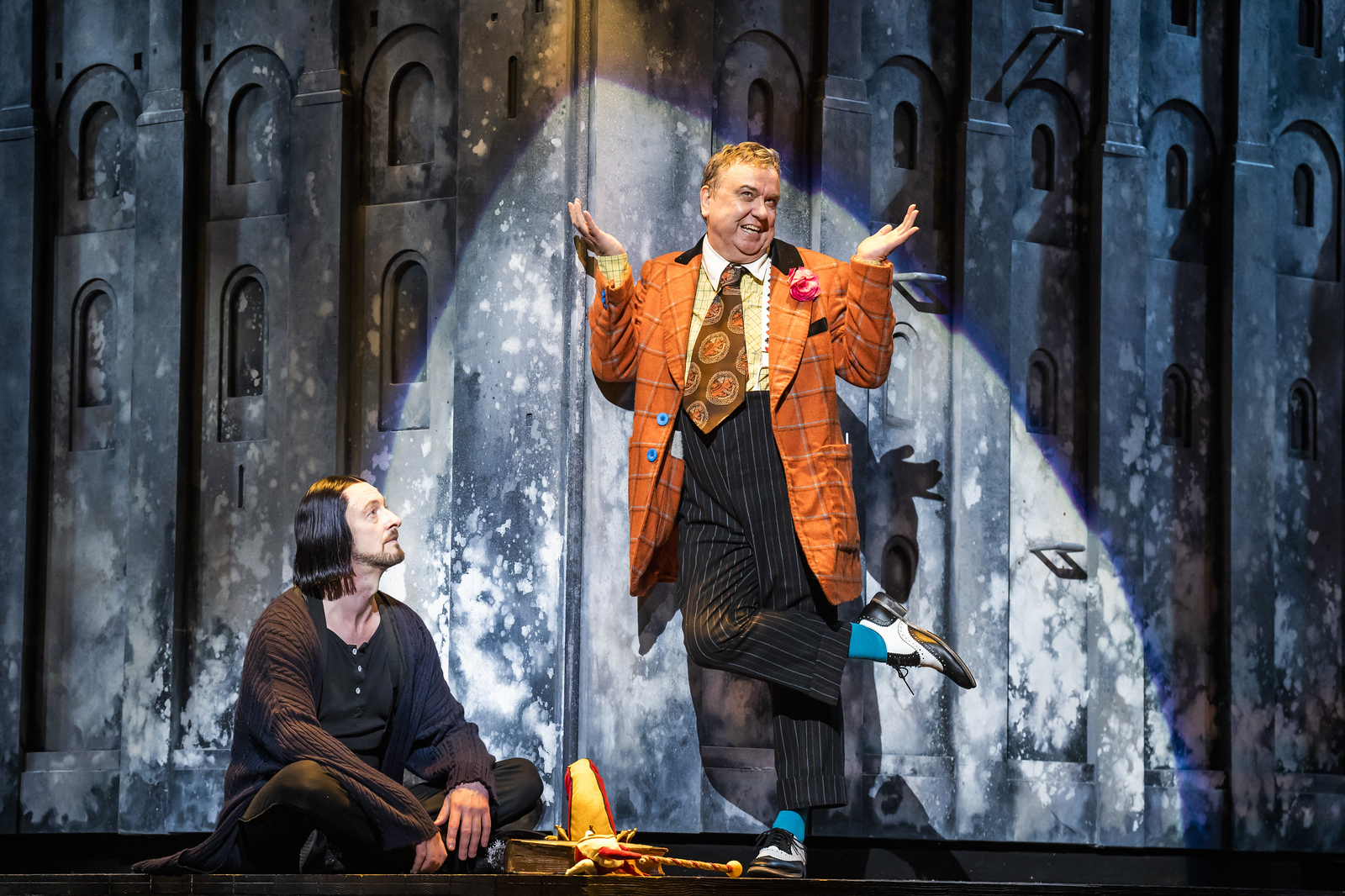 Richard McCabe (r.) as Jack Point in “Yeomen of the Guard” at ENO. (Photo: Tristram Kenton)

Jack Point, in love with Elsie who has been secretly married to Colonel Fairfax, is played like an ageing, faded Max Miller. However well he plays the accordion, it is a great pity that someone who can sing was not cast in this role.

As always at ENO, the chorus are the real stars, even if the ladies are dressed as female prison warders: surely they did not exist at the Tower in the 1950s? The double chorus early in Act One shows how well they work as a group of professionals, expertly trained by Mark Biggins, even if the gentlemen are given some very silly and inappropriate dance steps to do at times (why???).

One feels sorry for the orchestra as the overture was partially masked by the projection of a supposed BBC Newscast and a correspondent reporting on the arrest of Colonel Fairfax. Throughout there was some fine playing here, even if conductor Chris Hopkins occasionally allowed pit and stage to come adrift and his reading of the overture was too swift and not played with sufficient heft. 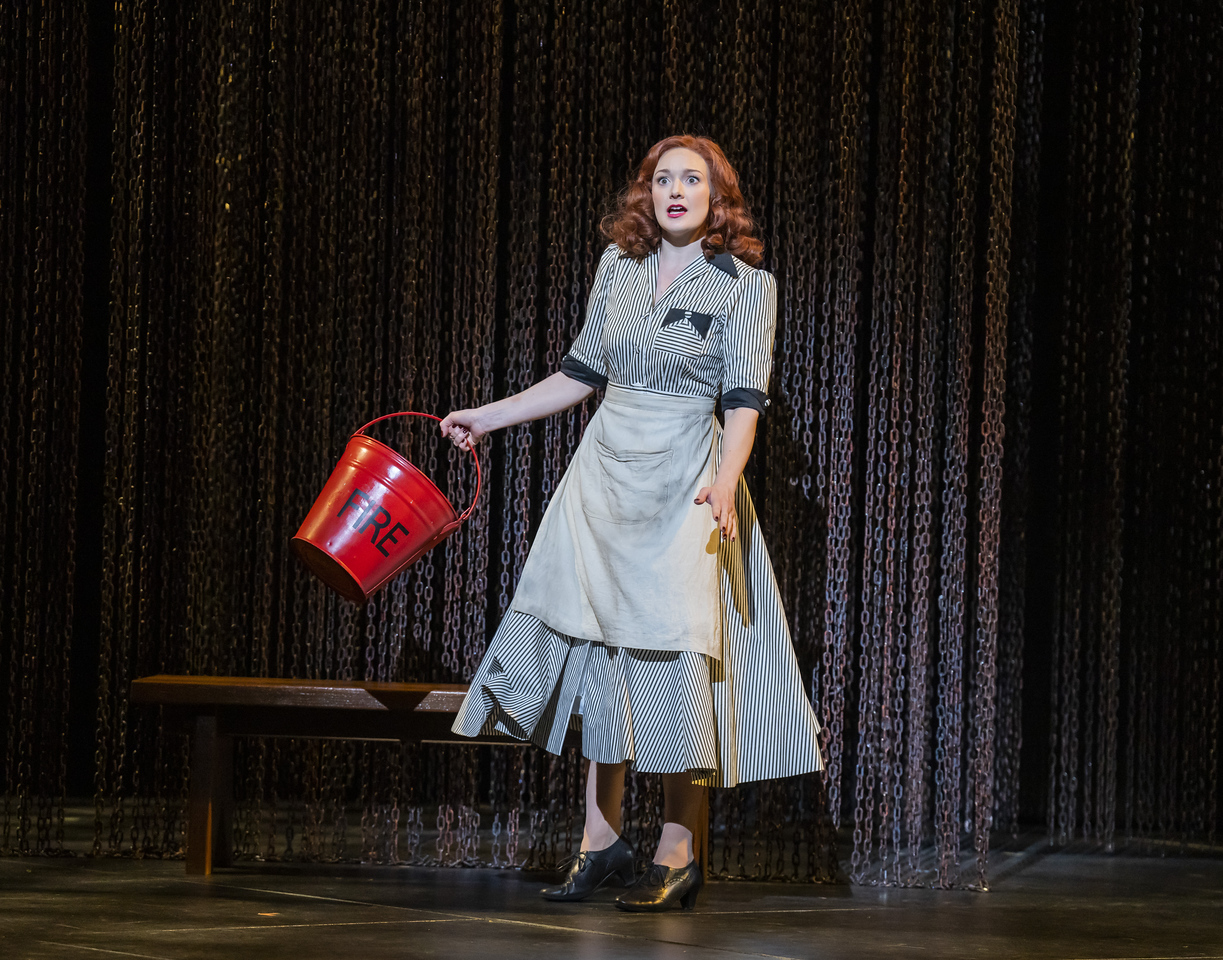 Heather Lowe as Phoebe in “Yeomen of the Guard” at ENO. (Photo: Tristram Kenton)

So, a curate’s egg of a production, proving once again that it is very difficult for an opera company to find that elusive style that all ‘operetta’ or ‘light opera’ needs, especially in the London Coliseum which seems just too large for what is, in effect quite an intimate form, as the original, long lamented D’Oyly Carte opera Company knew!