Every summer since 2001, Theater und Orchester Neubrandenburg has staged an open-air operetta production in the Schlossgarten, Neustrelitz. Which, for a town with a population of only 20, 000, is quite an achievement, especially when one considers the standard regularly achieved. This year, the choice fell on Der Zigeunerbaron. 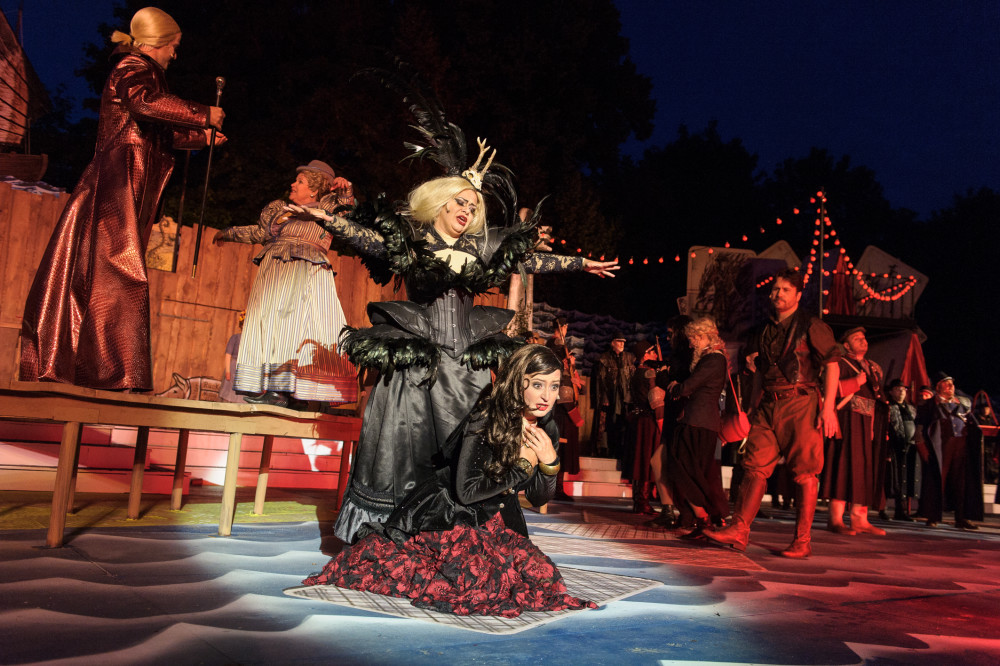 Luckily the production at Neustrelitz was able to find singing actors more than capable of filling Strauss’ musical requirements, ranging from the operatic to the big chorus moments to the fun elements. Perhaps the most successful in the first category was Tonje Haugland (Saffi) whose powerful singing made the most of her ‘Zigeunerlied’ in Act One. Like the remainder of the cast she also looked the correct age and understood the style of acting required.

Daniel Szeili, embodied the role of Sandor: suave, bearded, swashbuckling: like a Hungarian Errol Flynn – a true ‘barihunk’! It is a shame that it was decided to cast a high baritone in this role, as it really needs a tenor with ringing high notes to do full justice to Strauss’ glorious music. 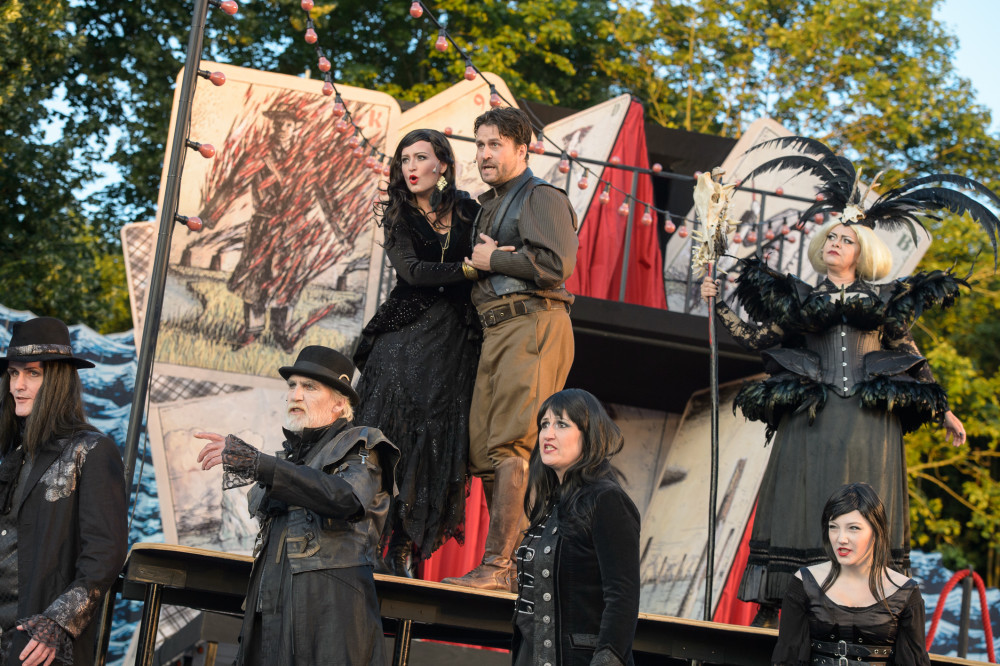 In the ‘comic’ role of Ottokar, Andres Felipe Orozco was well-nigh perfect: making the most of what is an underwritten role, as was Laura Scherwitzl as Arsena, whom he eventually marries. Bernd Koennes(Kalman Zsupan: the pig breeder) possesses a most unusual tenor voice, having a very attractive quick vibrato and power which carried easily in the large open space. He also had considerable stage presence: not easy considering the vastness of the acting space. 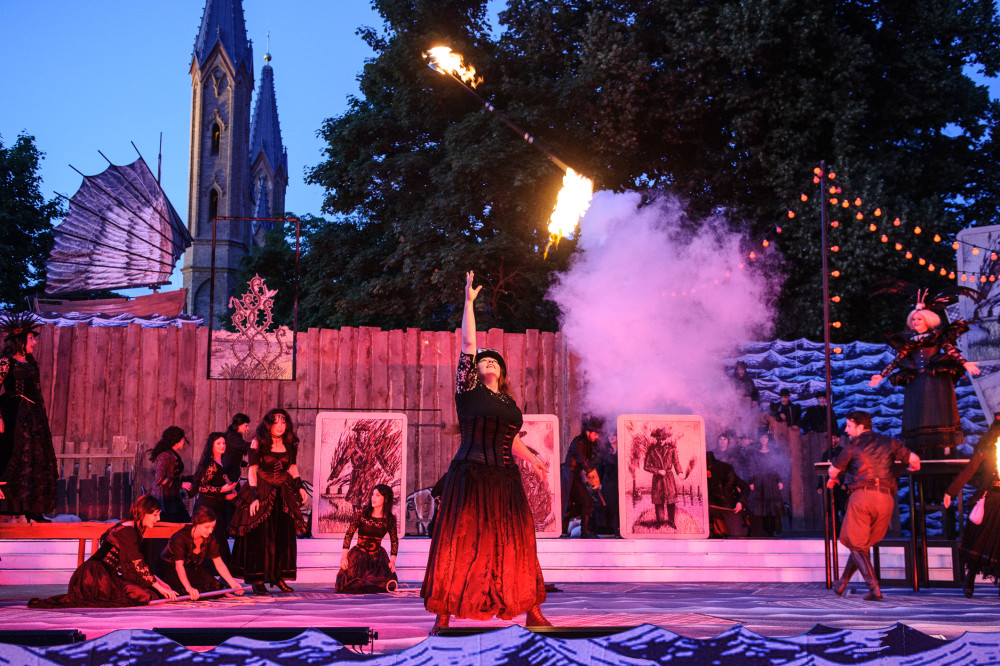 Viola Zimmermann(Czipra, a gypsy woman) also demonstrated her ability to dominate the stage, even though she was vocally unwell, her singing being undertaken, powerfully, by the excellent Gritt Gnauck. 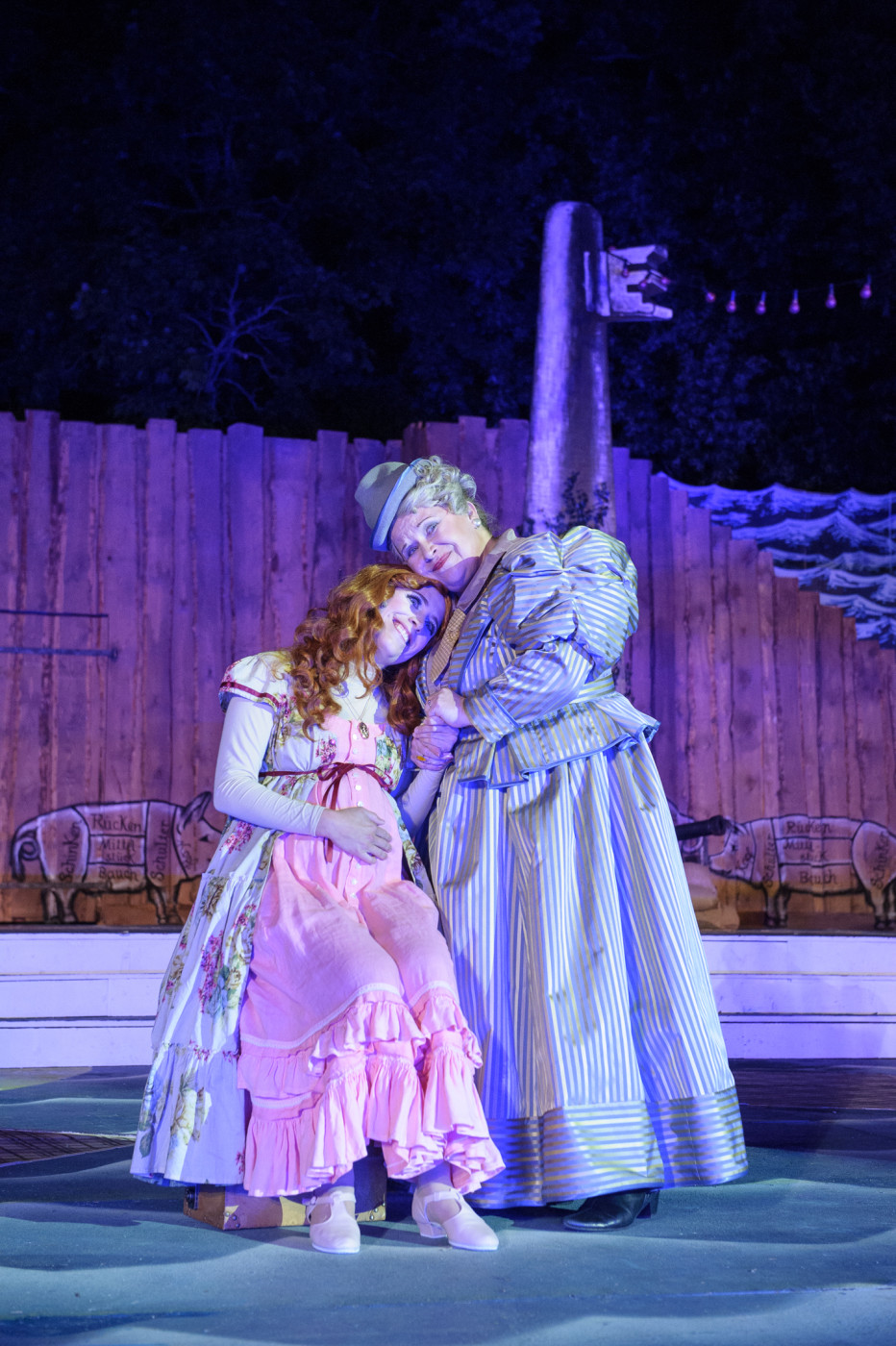 However, as Kevin Clarke has already intimated elsewhere, the ‘star’ of the evening must be Renata Pick in the role of Mirabella, Arsena’s governess and Ottakar’s mother. This is very much a secondary role, but she is given a marvellous song in the first act, which, in this singer’s rendition, is a master class in how to interpret and put over a number using very little voice: this was a performance to treasure and remember long after the show was over.(I was lucky enough to meet her after the performance, and, like all ‘great’ artistes, she was so unassuming, lovely and down to earth.) 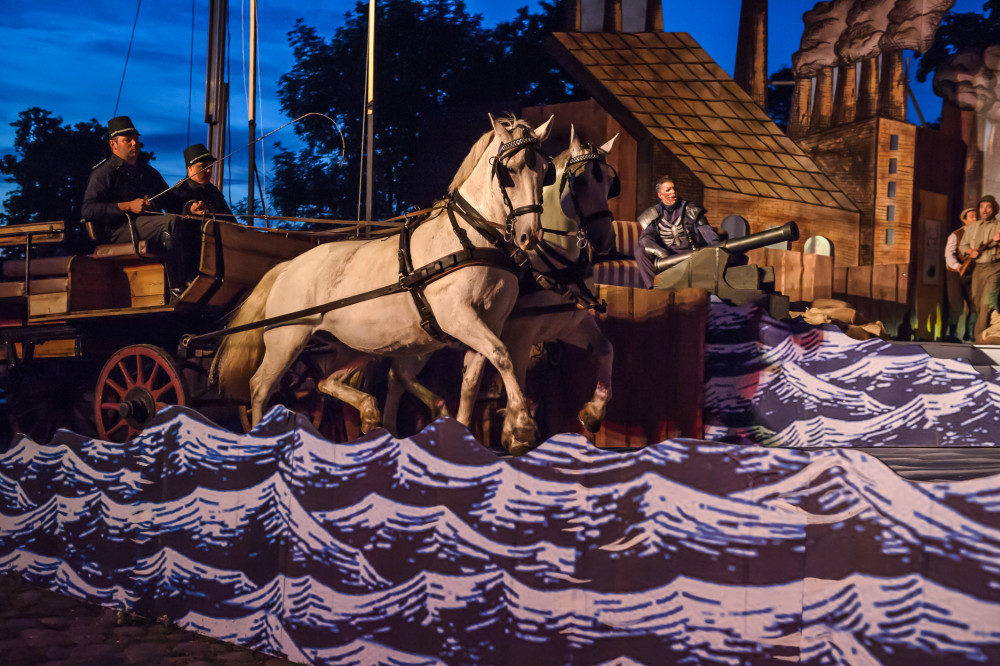 I was especially impressed with both the direction and speaking of the dialogue. Frequently, this appears under-rehearsed in operetta productions, and is something to be endured between musical numbers. In this production not only did it have great clarity of diction from all concerned, it also had terrific pace and energy, really driving the piece forward, as it should be! 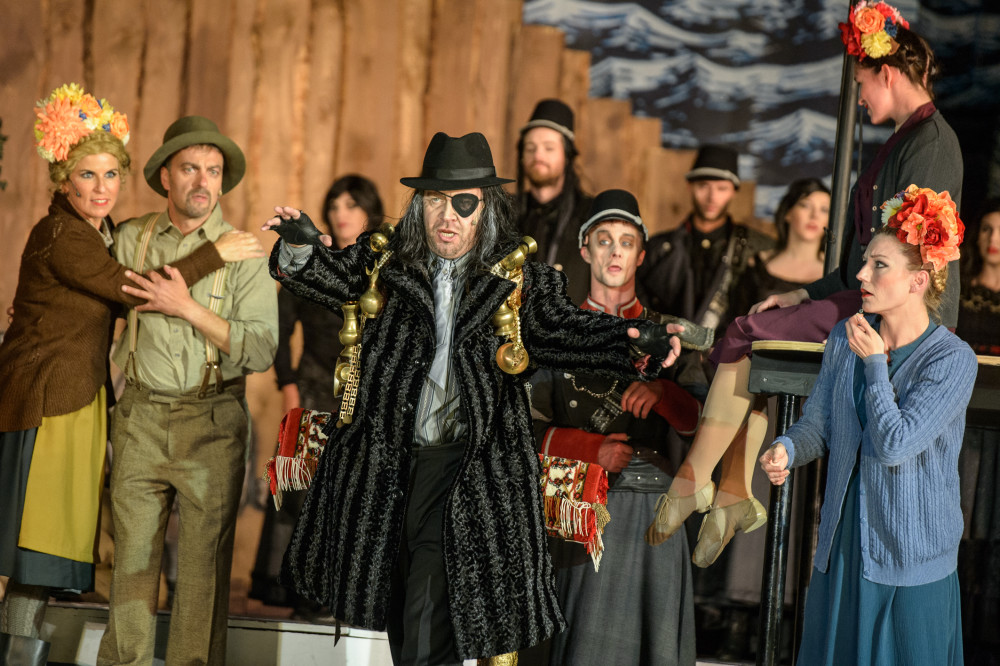 Special mention must be made of the Tanzkompanie Neustrelitz who seemed under-used: or perhaps this was only because they were so talented, one wanted to see more!

The production used both the Chorus and Extrachorus of Theater Neustrelitz, as well as members of ‘Coruso’, all of whom ensured that the large acting area was always suitably ‘dressed’ and whose enthusiastic singing greatly added to the enjoyment of the evening. 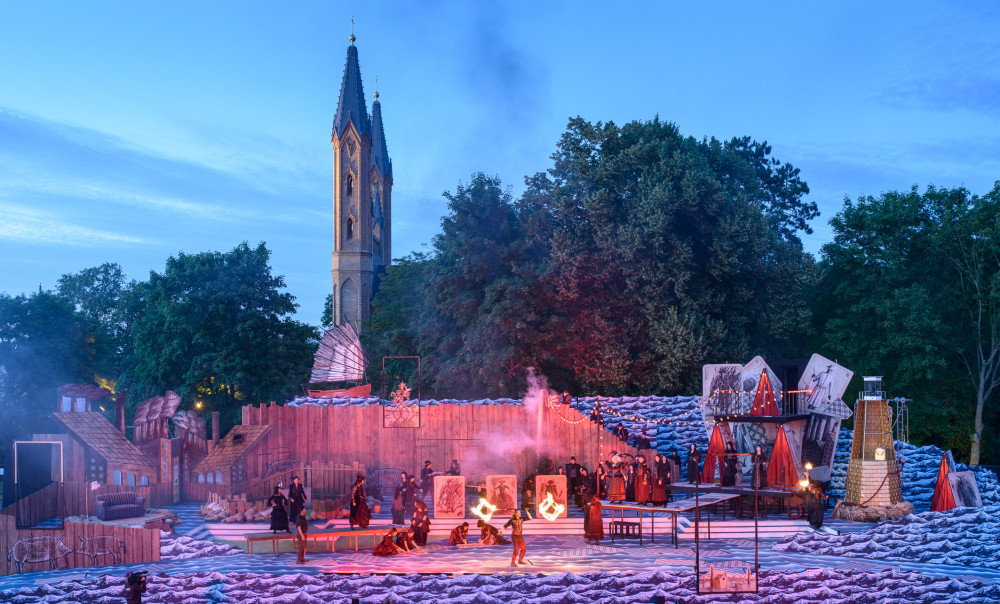 Jörg Pitschmann had the unenviable task of conducting this large-scale open-air performance, one he acquitted very successfully, with only the occasional discrepancy between the excellent Neubrandenburg Philharmonie and the performers.

Lavish, imaginatively designed costumes and sets were designed by Lena Brexendorff, using various levels and spaces to great effect only added to the total success of the whole evening. The director, Jürgen Pöckel, must be congratulated for not only getting the various horses, fire eaters, children and geese involved, but also as the imaginative brain behind what is by far the most enjoyable open-air theatre I have seen for a long time. 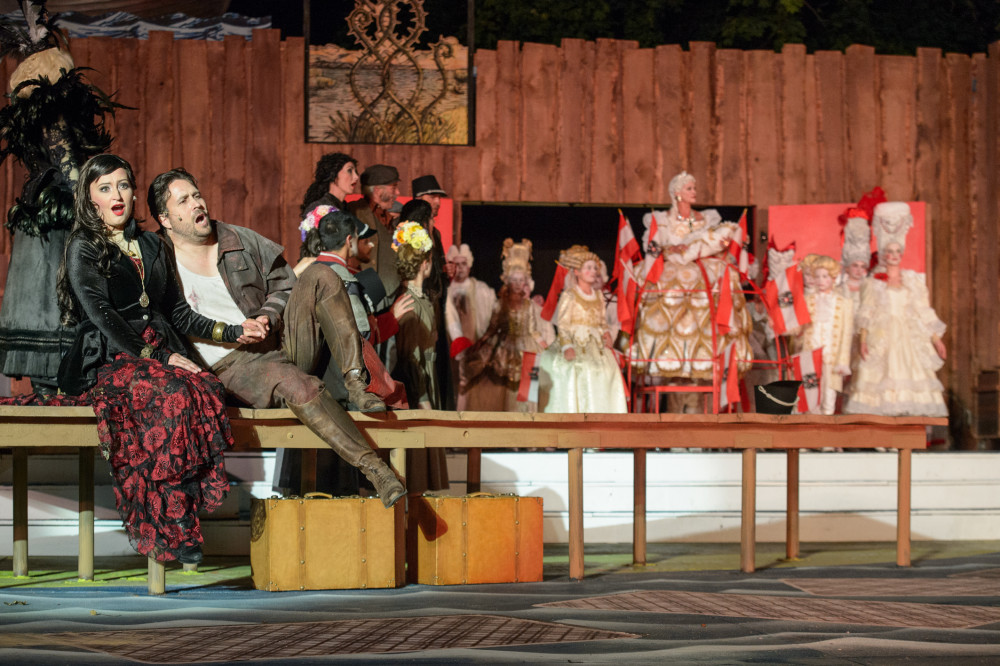 My only disappointment was that, considering Zsupan is a pig breeder, there were not real live herds of those animals as well!

Next year, the operetta chosen (first night 6 July) is Walter and Willi Kollo’s Wie Einst im Mai, a Berlin style operetta, which, although not as well known as Der Zigeunerbaron, should be great fun!