The Vienna Volksoper’s new staging – their first since 1988 – of Die Zirkusprinzessin is unashamedly old-fashioned – and there’s nothing wrong in that from my point of view! The director, Thomas Enzinger, clearly has a ‘hands-off’, non-interventionist approach to his craft. The convoluted, yet simple, plot, is a variation of the famous Bettelstudent story, recycled by the librettists Brammer and Gruenwald: Princess spurns the love of a Count, who gets his revenge by tricking her into marrying a ‘Baron’, who is in reality a Circus artiste: Mister X – or is he? 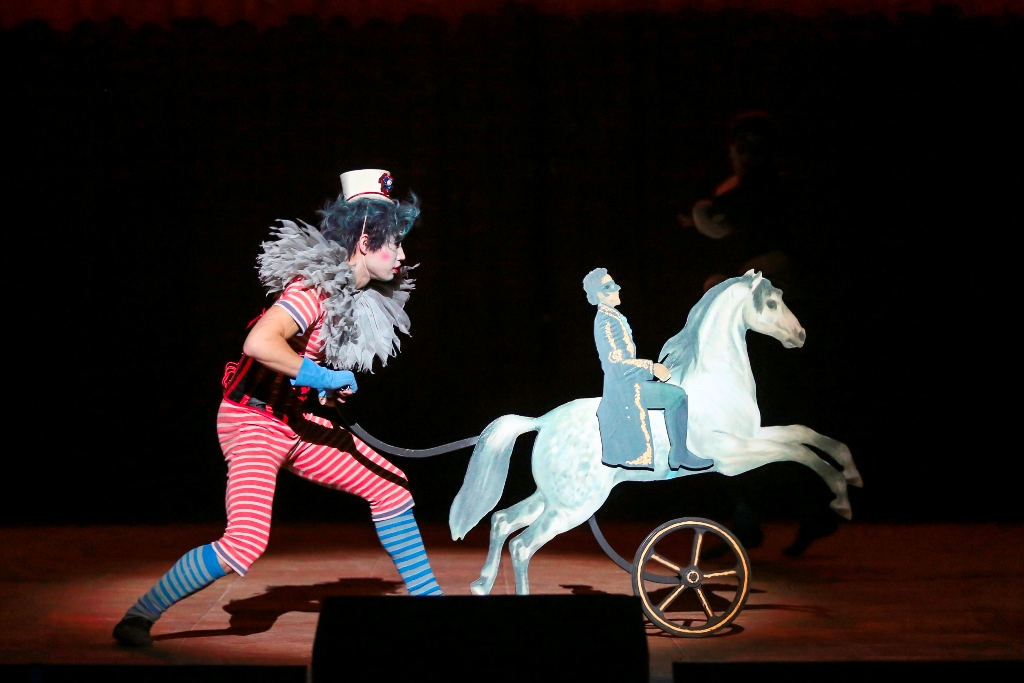 Mr. Enzinger wisely uses the original book which proves to be quite witty, even if at times the dialogue needs more energy and motivation. In fact the pace of the whole show is very relaxed, which suits parts of it well. It is a shame that the talented circus performers employed are not given something more definite to do, and the chorus is just used to dress the stage: its members appear to have been told just to drink/jig around a bit/chat etc. rather than being given definite roles to play. The ability to be still so as not to take the focus away from what is happening (usually centre stage in this production) has not been instilled!

The Wiener Staatsballett is superb under their choreographer Bohdana Szivacs. The dancers are frequently used, and really lift the performance every time they appear, such as in the finales to Acts one and two.

The designer has set the entire operetta within a circular room of the permanent circus building in St Petersburg, with the entrance to the circus ring itself being upstage. The period is created by a series of projections during the overture, showing the pristine condition of the building in 1912, when the operetta is set, compared to the run-down condition of the closed circus in 1926, when Die Zirkusprinzessin was first produced – at the Theater an der Wien.  Many Russian cities have permanent circus buildings, and I remember attending a performance in the ‘Leningrad’ one about 40 years ago – exhilarating and spectacular! 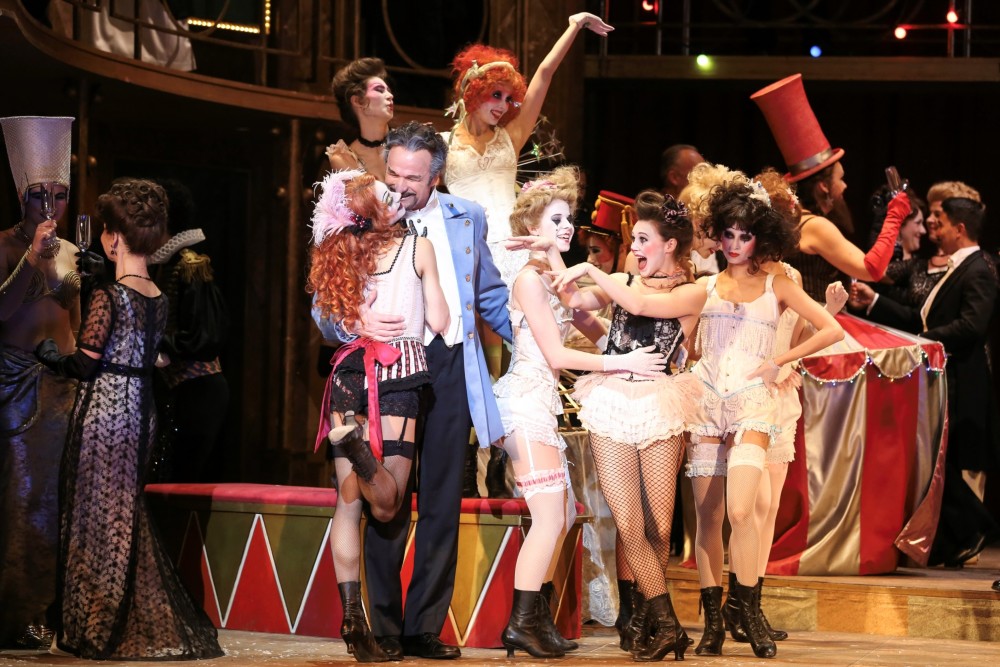 The circus is in town for Vienna’s “Die Zirkusprinzessin.” (Photo: Barbara Pálffy/Volksoper Wien)

Mr. Enzinger has set the first scene of Act 2 in a forest in winter. This gives the opportunity for everyone to be costumed (the imaginative Sven Bindseil) in lavish white fur hats, coats and boots, but the change of scene is only signified by white tree trunks flown into the circus building, which is slightly incongruous. More strange still is that suddenly, after exactly 75 minutes, the curtain falls for the interval, which totally destroys the dramatic impact of the act!

Most strange is that, after 25 minutes, the curtain rises to exactly the same scene – yet 10 minutes later there is a scene change to the Count’s palace, where all of Act 2 is usually set! 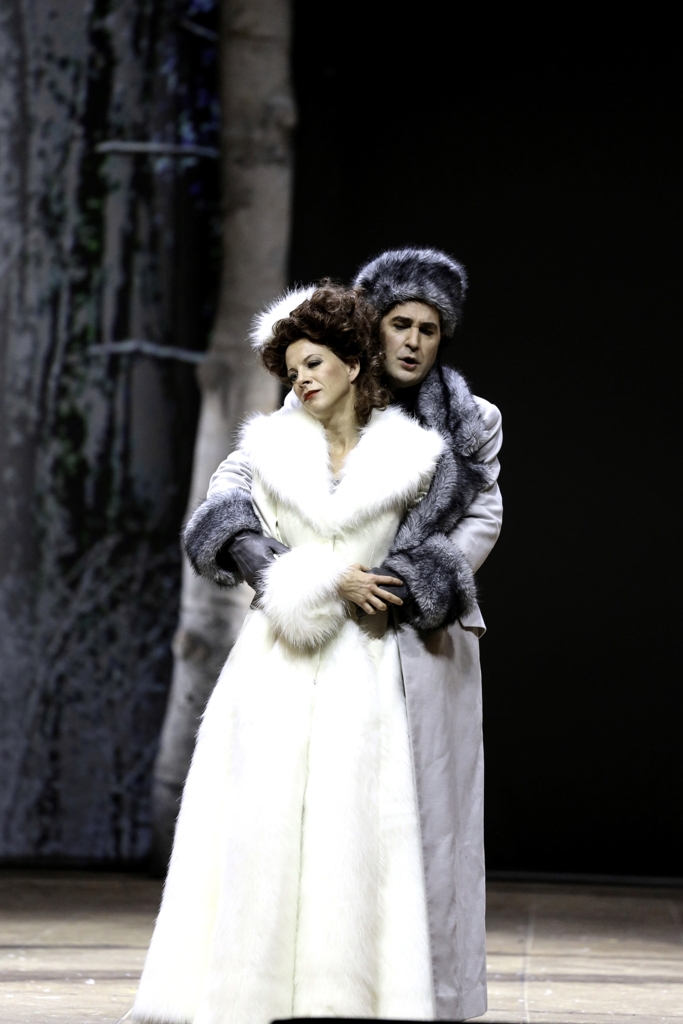 The interval needed to have been after Act one, with Acts two and three played without a break, especially as Act three is, as often, very brief.

The set for Act one also does duty for the Archduke Karl Hotel in Vienna – I popped in whilst in Vienna and it looks nothing like a circus building! 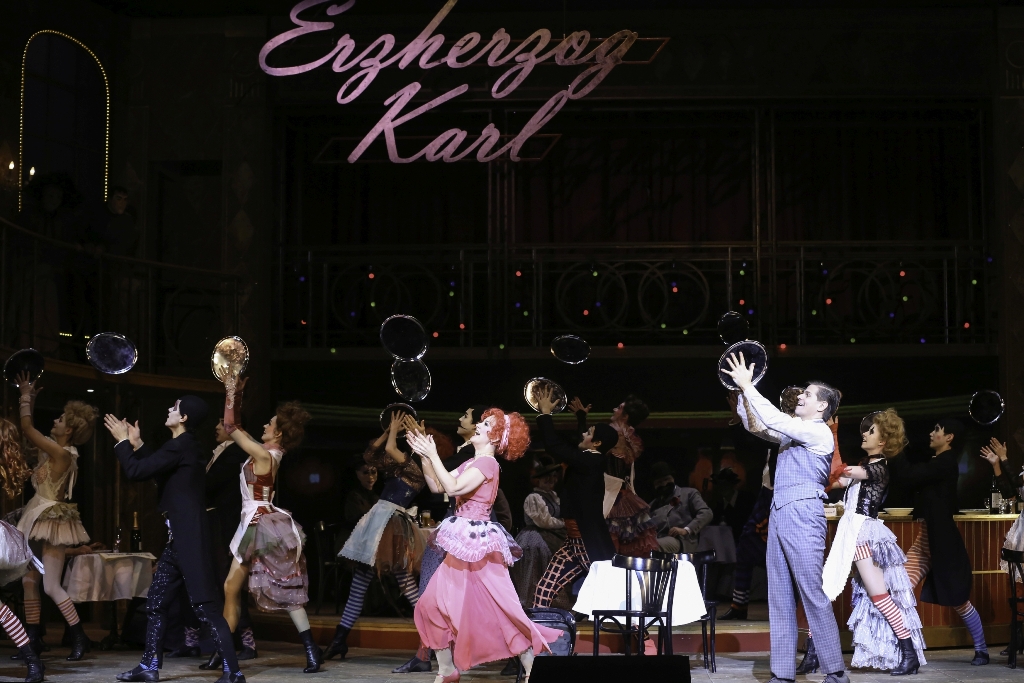 The cast is experienced and talented, as one would expect at the Volksoper. Ursula Pfitzner (Fedora = the Circus Princess) makes a charismatic figure out of what can be a two-dimensional role in the wrong hands. She has true presence, and has a voice which floats effortlessly when required, such as in ‘Was in der Welt’ and her duets with Mister X.

He is portrayed by Carsten Süss: suave, debonair, Errol Flynn like – tall and dark. He, like Ms. Pfitzner, looks the right age ( i.e. not too old!) and commands the stage. He uses his voice with passion, both in the dialogue, and in the various romantic duets: an Ivor Novello who can sing! 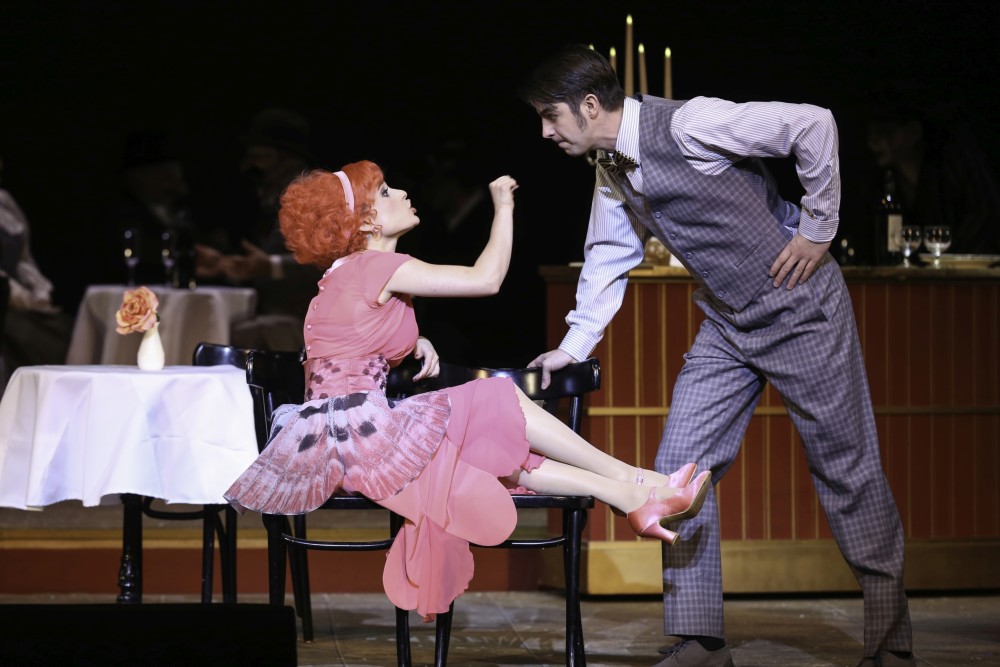 My only disappointment was that  he, or his stunt double or the special effects department at the Volksoper, did not attempt his ‘act’. He is supposed to play the violin at the dome of the big top, whilst undertaking a death defying leap onto a galloping horse. All that happened was that there was a roll on the drums and all the cast looked out into the audience: not even any sound effects!!

Nicolaus Hagg is suitably villainous as Saskusin, who, thwarted in love, attempts to get his revenge on Fedora, and the two sub-plot roles of Mabel (supposedly American but in fact Viennese) and Toni are enthusiastically played with at times hilarious comic timing, by Elisabeth Schwarz and Michael Havlicek. Their Act 2 duet ‘ Wieder blüht die Rebe’ is great fun.

Herbert Steinboeck is given the unenviable task of portraying the non-singing ‘comic’ head-waiter in Act 3: mercifully he has just been told to get on with it by the director, and is very amusing, even if his antics delay the denouement! Worth listening out for in Act three is the music played almost continually by the bar pianist, George Frebold: selections from other Kalman operettas – a nice touch. 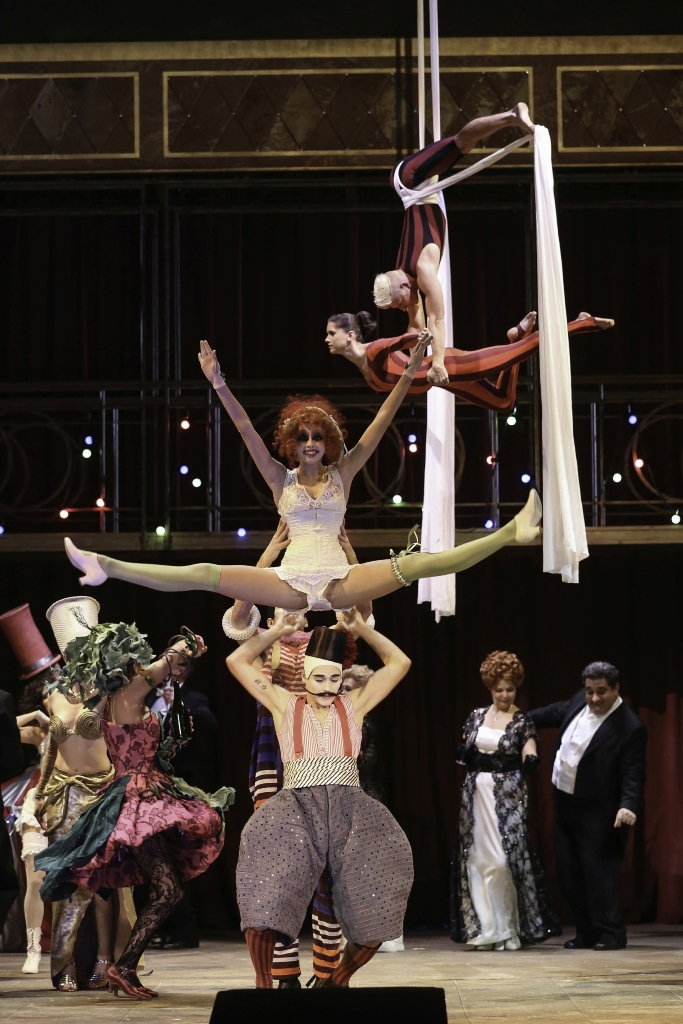 One would expect the orchestra at the Volksoper to play with a style and finesse garnered over the last 150 years, and so it proves. What is so impressive is their ability to play quietly yet with a full, rich timbre and every detail of instrumentation audible: especially important when there is not a microphone in sight! Alfred Eschwe is the very experienced, talented musical director, being able to mould the melodies with loving care.

Only once, at the end of Act 2, did orchestra and stage come adrift – though it was very noticeable.

All in all an enjoyable evening: I felt that could I be transported back 50 or 90 years, I should still have been seeing a similar production, but there’s nothing wrong in a wallow in nostalgia, especially when the music is by Kalman. 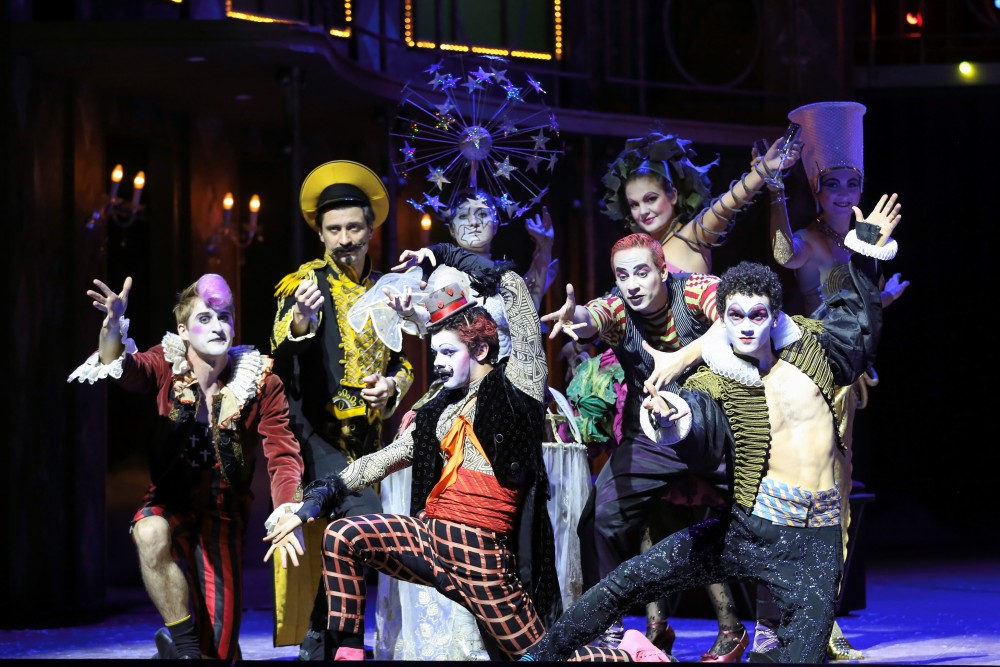